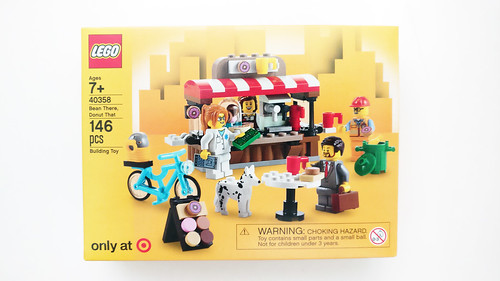 A few days ago, an image of a new Target exclusive LEGO set called Bean There, Donut That (40358) showed up online and various Target locations have started to get stock of them. It has 146 pieces and retails for $19.99 but I’m also hearing that this particular set could be a promotional item at the end of the month since Target has not been bringing them out to the sales floor. 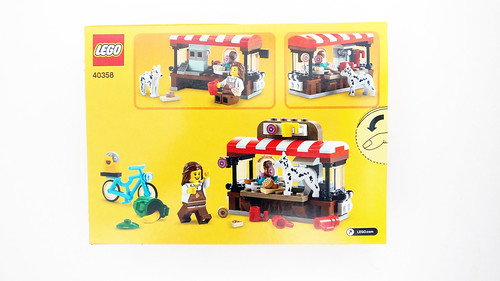 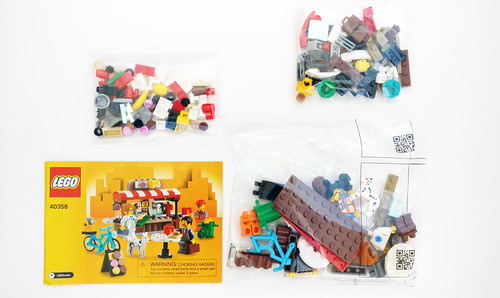 In a nice surprise, there are four minifigures in this set. The first one is a businessman that is dressed in a gray suit with a red tie. He has a bearded face with a combover hairstyle. His accessory is a brown suitcase. 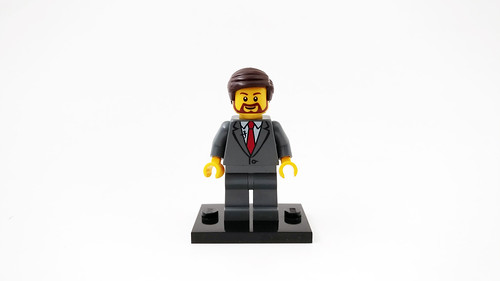 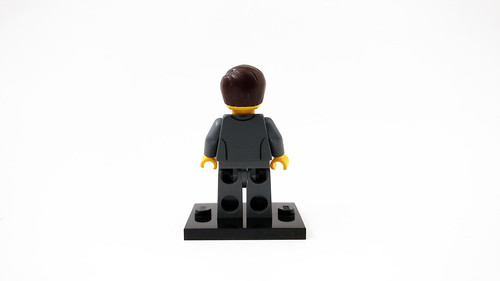 The next minifigure is a sanitation worker. He has on an orange safety vest with some reflective strips on both sides of the torso. He’s an older gentleman as you can see from the gray moustache. He also wears a red hard hat. His accessory is a green trash can. 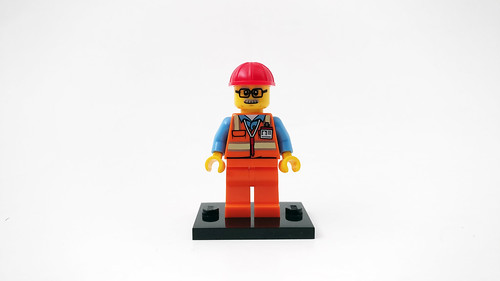 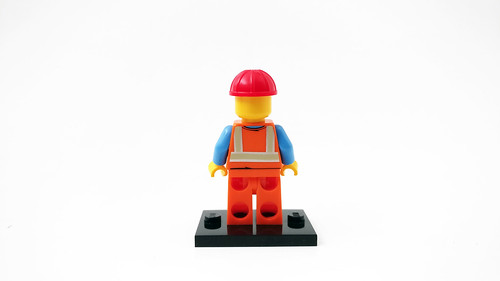 Following the construction worker is the coffee barista who most likely works for The Coffee Chain. She has on a similar outfit that all the other baristas in other sets wear like Larry the Barista. She has a brown apron with The Coffee Chain logo over a white shirt and brown pants. She has a happy expression with long braided brown hair. 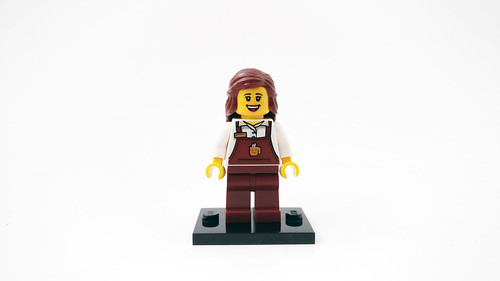 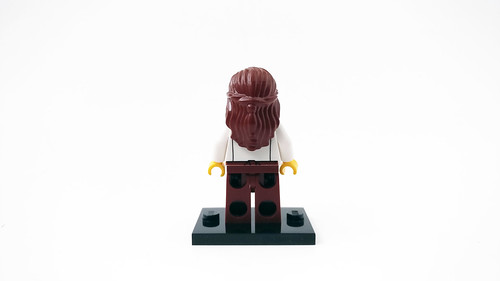 Finally, we have a female doctor/nurse in a white outfit. She also has a happy expression while wearing glasses. The hairstyle is a light brown ponytail. She has a printed 1×2 cell phone tile as an accessory. 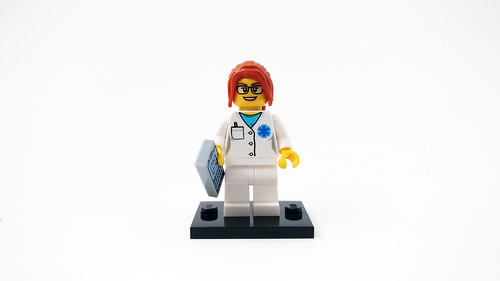 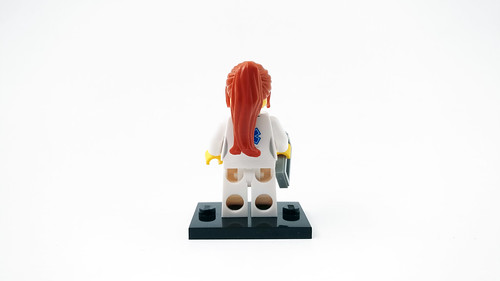 In addition to the minifigures, there are a lot of accessories and little builds to the set. As mentioned before, some of the accessories include a green trash can with a banana and a suitcase but we also get a light blue bicycle with a basket on the back to carry a light gray helmet. There’s even a black and white dog that I assume is a dalmatian. 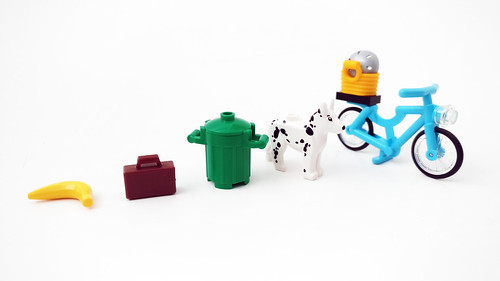 The first build is a table that has a pink donut, a cup, and some money. Nothing too interesting here, just a white 4×4 round plate on a black pedestal. 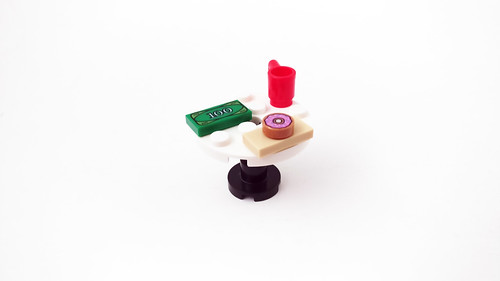 The next build is a black folding advertising sign for the donuts. There’s a variety of 1×1 round tiles to represent the selection and the sign is on a hinge. 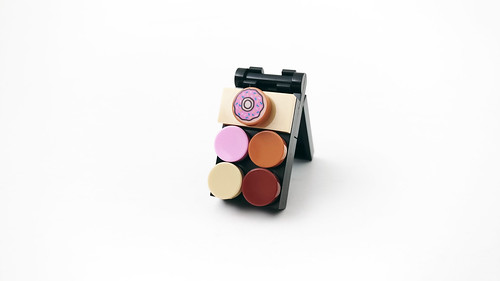 The rest of the build is for the coffee and donut stand. The base is mostly brown with a red and white canopy. The sign above the canopy shows a donut and coffee cup. The most elaborate thing here is the rotating donut/pastry plate that is filled with goodies. Next to it is a coffee machine in a light aqua color. 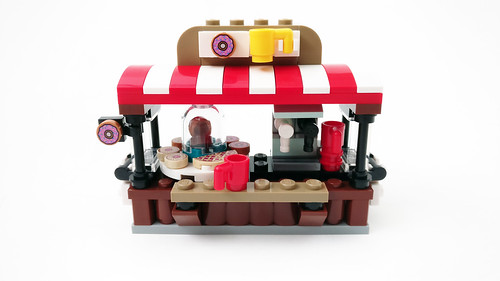 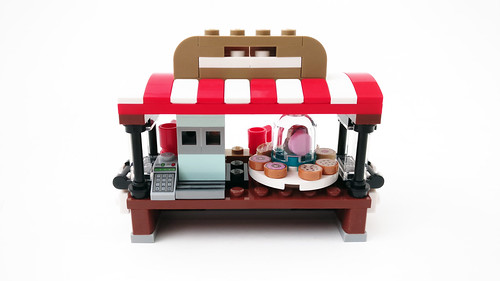 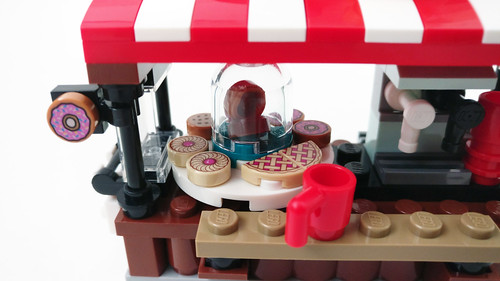 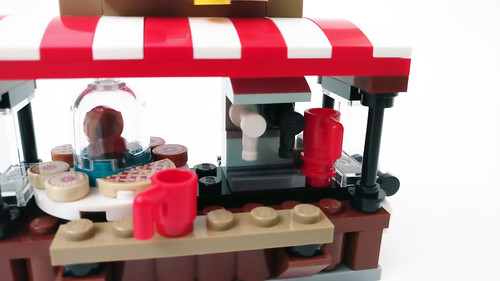 Overall the LEGO Bean There, Donut That (40358) set is a cute one that could fit into City layouts. I feel that this set is actually more of a larger minifigure and accessory pack because of everything we get. The minifigure selection is good with a nice variety of occupations. The accessories included are also a welcome addition as you can never have too many bikes and trash cans. 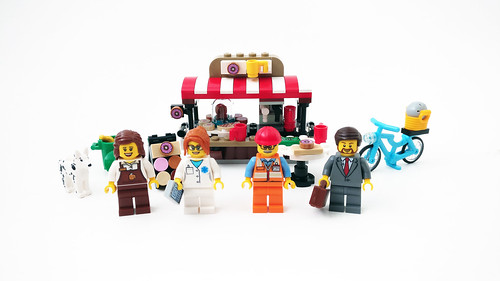 There are also a couple of things that I don’t like about the set. First is the price of $19.99 which I think is a little overpriced for what you get and I feel that $12.99-$14.99 is the perfect range. Again, I heard that this may be a promotional set at Target at the end of the month so we’ll see. Another thing that I don’t like about it is that it is exclusive to Target. If you’re a collector of things, you would know that Target is one of the worst places to find their exclusives. Hopefully it will be available online later on for those who want one and aren’t close to a location.

If you’re looking for this set and can’t wait for the street date release at Target, whenever that is, you can check Brickseek to see if it is in stock now at your location. The DPCI number is 204-00-0606. Keep in mind that it is not accurate and they may not actually be in stock even though it says it is. Be polite to the employees as they have no control when they will receive the sets at the stores.