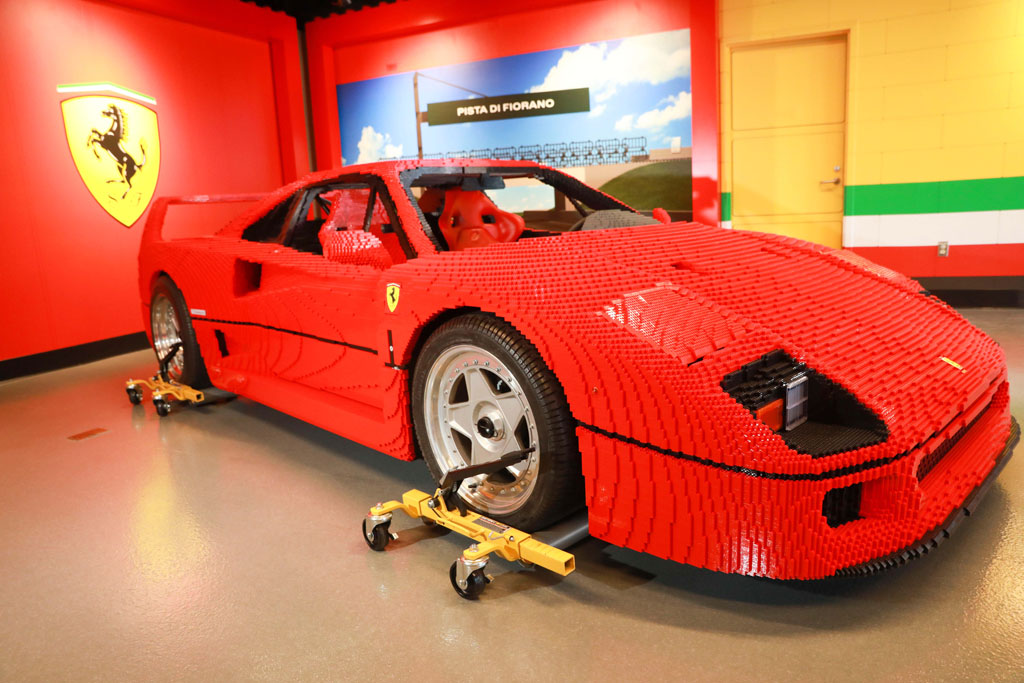 LEGOLAND California has revealed a life-size brick-built Ferrari F40 as part of the new LEGO Ferrari Build and Race attraction. The build has over 358.000 parts and took a team more than 3,700 hours to develop and construct the Ferrari.

Opening on May 12, LEGO Ferrari Build and Race is a brand new attraction at LEGOLAND California with interactive zones that hope to inspire builders.

New LEGO Model to be Featured in New Interactive Attraction Scheduled to Open May 12, 2022!

CARLSBAD, Calif. (April 28, 2022) – It may not have more than 470 horsepower, but it’s built out of more than 358,000 LEGO® elements, weighs more than 3,000 pounds and is a one-of-a-kind replica of one of the most celebrated Ferrari vehicles ever created…the first-ever life-size Ferrari F40 model developed by the LEGO Group will be on display as a part of LEGOLAND® California Resort’s new attraction, LEGO Ferrari Build and Race, opening May 12, 2022.

The Ferrari F40 model took a team of designers and builders more than 1,800 hours to develop and more than 1,900 hours to construct the high-performance ultra-luxury sports car. Resembling the actual F40 Ferrari, the LEGO version is similar in size at 14 feet in length, more than six feet wide, 4 feet tall and a wheelbase at 8 feet. 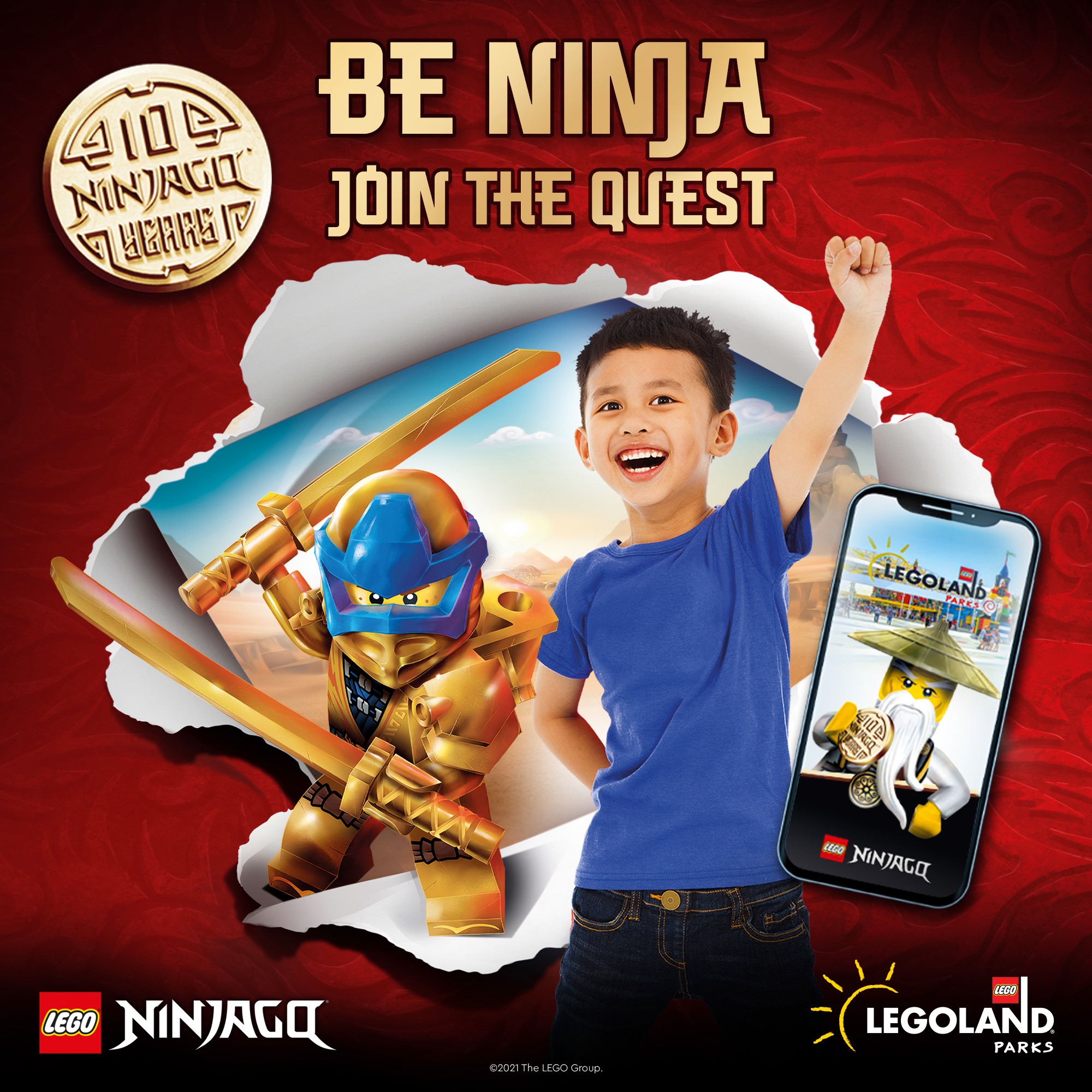 LEGOLAND California will be celebrating the 10th anniversary of LEGO Ninjago from August 13 – September 7. You can do various activities at the park digitally as part of their augmented reality adventure. There is also Ninjago-inspired rides, food, and more most likely inside LEGO Ninjago World which opened at the park a few years ago.

CELEBRATE 10 YEARS OF LEGO® NINJAGO® WITH THE ULTIMATE IMMERSIVE EXPERIENCE AS REAL AND VIRTUAL WORLDS COLLIDE, AND A GREAT ADVENTURE AWAITS.

Master Wu and his team of ninja have been searching for their missing Golden Amulet for a very long time. Without it, and the secrets it holds, NINJAGO is in trouble. For the first time ever, Master Wu is coming to LEGOLAND California Resort and asking for help. Heneeds warriors to join his quest, BE NINJA and protect NINJAGO. Legend has it that many years ago in the land of NINJAGO, brothers Wu and Garmadon fought and Garmadon was overtaken by evil. A Golden Amulet, upon which Wu had inscribed the teachings of Spinjitzu, was smashed into six pieces by Garmadon and hiddenacross the world, with the secrets lost. Now he needs brave warriors to help retrieve the six golden fragments.

Join Kai, Cole, Zane, Jay, Lloyd and Nya to ‘BE NINJA’ as they digitally share their secret powers. Learn their moves as you take on the quest to restore the Golden Amulet, protect the NINJAGO legacy and be rewarded as you complete the challenges towards Ninja Mastery. Our augmented reality adventure is just part of a 10-year 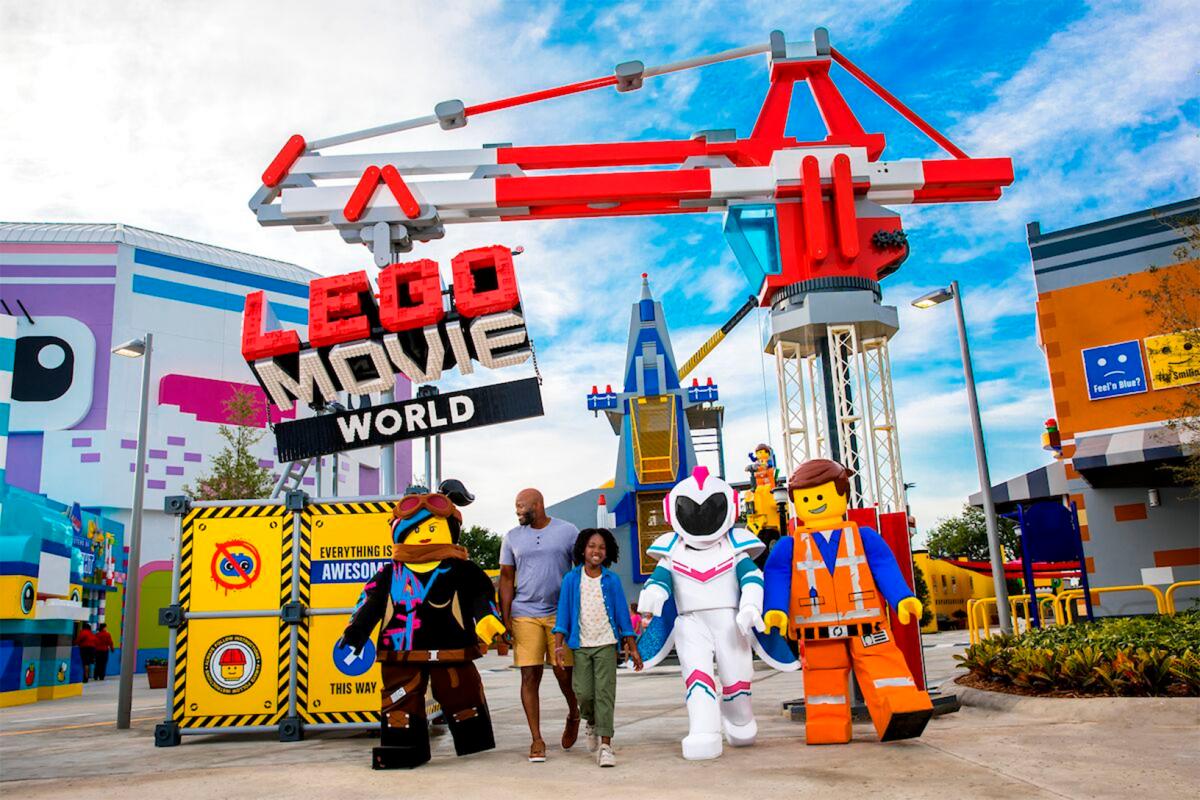 If you’re planning a trip to LEGOLAND California, you may want to read up on their upcoming events that will be held at the park for the rest of 2021. There is something going on every month for until the end of the year including their newest attraction, The LEGO Movie World.

LEGOLAND® California Resort invites families to go from theater to theme park with the opening of THE LEGO® MOVIE™ WORLD! Based on the blockbuster films The LEGO Movie and The LEGO Movie 2: The Second Part, the new land fully immerses guests into the LEGO Movie universe and places them onto the streets of Bricksburg. On the flagship ride, Emmet’s Flying Adventure, guests can hop aboard Emmet’s triple decker flying couch for a thrill-seeking adventure. In addition, families will experience the rush of falling from Unikitty’s Disco Drop, meet Emmet and all his friends in Emmet’s Super Suite Apartment and have an out-of-this-world experience inside Benny’s Playship. For more information, visit www.LEGOLAND.com

LEGOLAND® California Resort is excited to introduce a world with no rules just pure creativity… PLANET LEGOLAND® is opening June 10, 2021! This new immersive build experience encourages children and their parents to unleash their imaginations by building, unbuilding and rebuilding the world of their dreams with, of course, LEGO® bricks. Encounter a six-foot wide LEGO globe, built out of more than 200,000 bricks, then select from one of four different themed stations to build your

Now that LEGOLAND® California Resort is back open after being closed for 13 months, the family theme park in Carlsbad, CA is excited to open THE LEGO® MOVIE™ WORLD on May 27, 2021. For the first time, kids and families will step onto the streets of Bricksburg and experience the Park’s newest and biggest adventure which brings the blockbuster films THE LEGO® MOVIE™ and THE LEGO® MOVIE™ 2: The Second Part, to life.

Featuring six interactive attractions, the new land is the largest addition in the Park’s history. Emmet’s Flying Adventure, the flagship ride, allows guests to hop aboard Emmet’s triple decker flying couch for a thrill-seeking race against his friends. Kids and families will also enjoy the rush of falling from Unikitty’s Disco Drop and experiencing the many personalities of the fearless feline. The adventure doesn’t stop there as guests can explore Benny’s Play Ship, ride 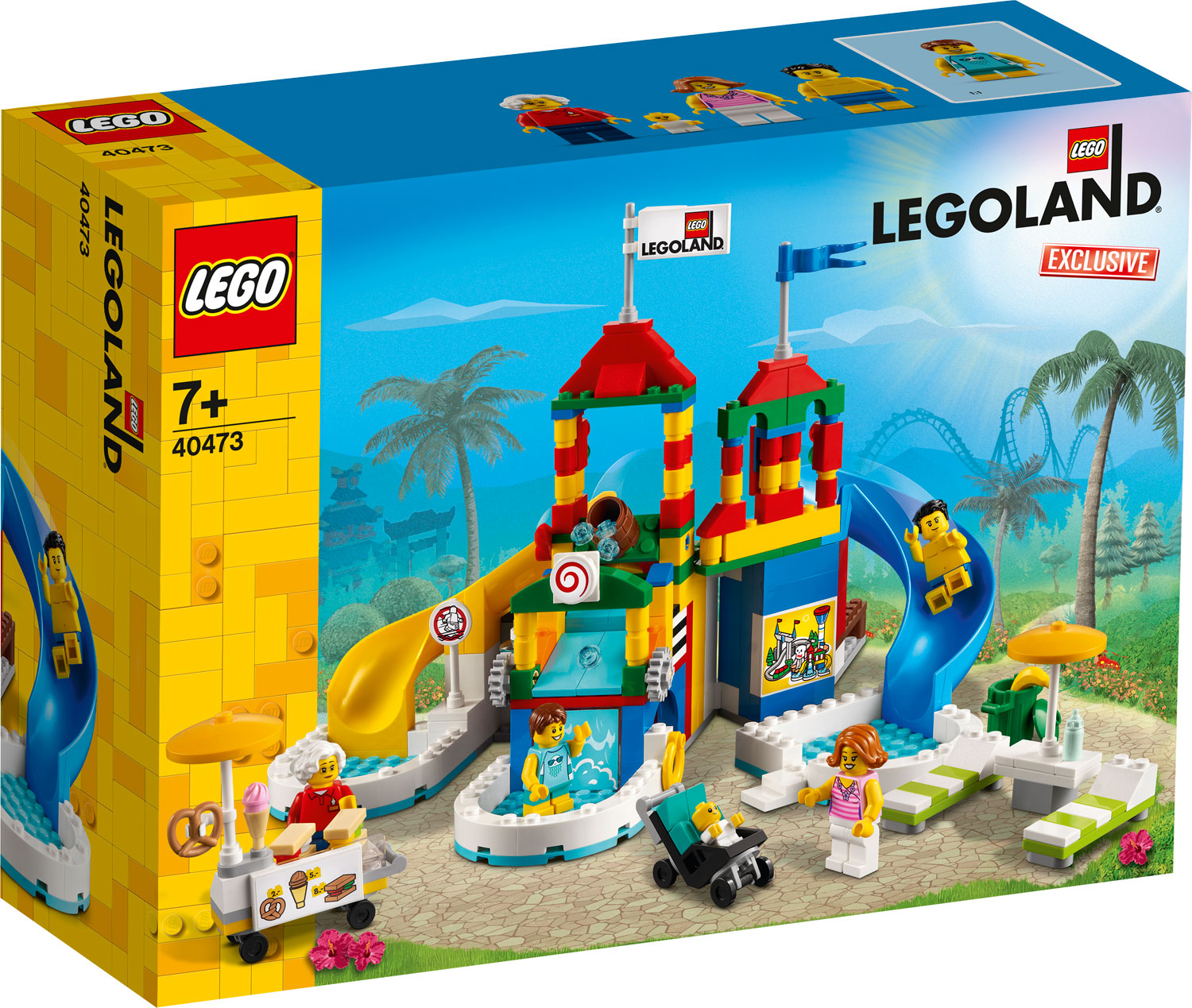 The new LEGOLAND exclusive Water Park (40473) is now available for purchase at the LEGOLAND California Shop. The set has 360 pieces and retails for $39.99. The set was revealed last month and it includes a couple of slides as well as a couple of surrounding amenities. The shipping on it, unfortunately, is quite high at $9.95. There’s no word yet if Target will have it since they have started selling LEGOLAND exclusive sets.

LEGOLAND® fans aged 7 and up can relive the thrills and chills of their favorite water park with this fun build. It’s packed with details from the real water park including the tower, 2 slides, tip bucket, 2 pools, a shower with lockers, a garbage can, 2 recliners and a side table, plus a wheeled café. The 4 LEGO® minifigures include an employee, plus a mom, dad and boy in swimwear. There’s a cute baby figure with a stroller and bottle and the set also features the iconic park map and stickers.

• A great gift for LEGO® fans who want to expand their LEGOLAND® world with this cool build. Only available at LEGOLAND, it makes the perfect souvenir of a fun day out.
• This 360-piece set is packed with authentic details and features inspired by the real LEGOLAND® Water Park.
• The main building measures over 9.5 in. (25 cm) long, 6 in. (16 cm) high and 7.5 in. (20 cm) wide. 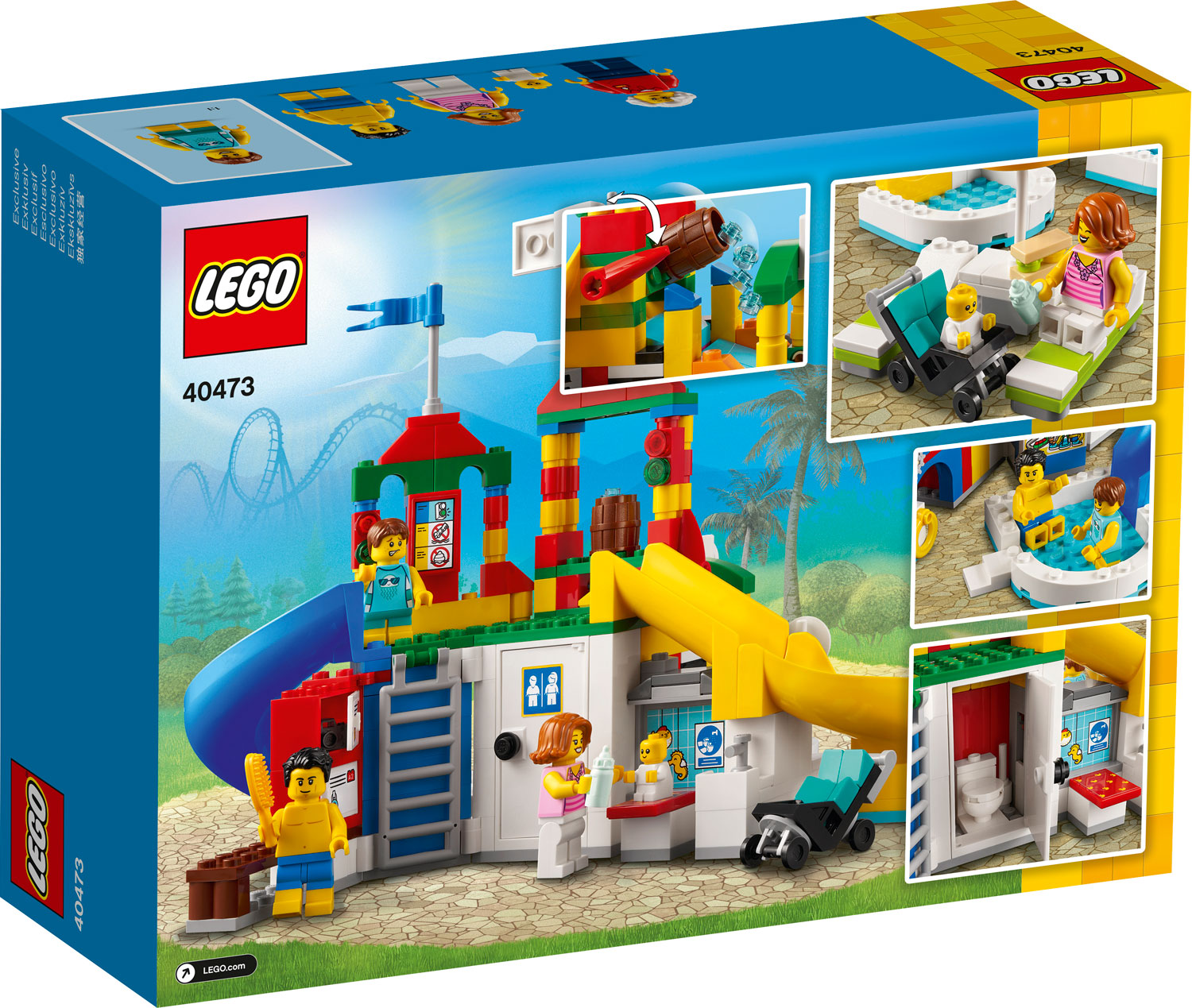 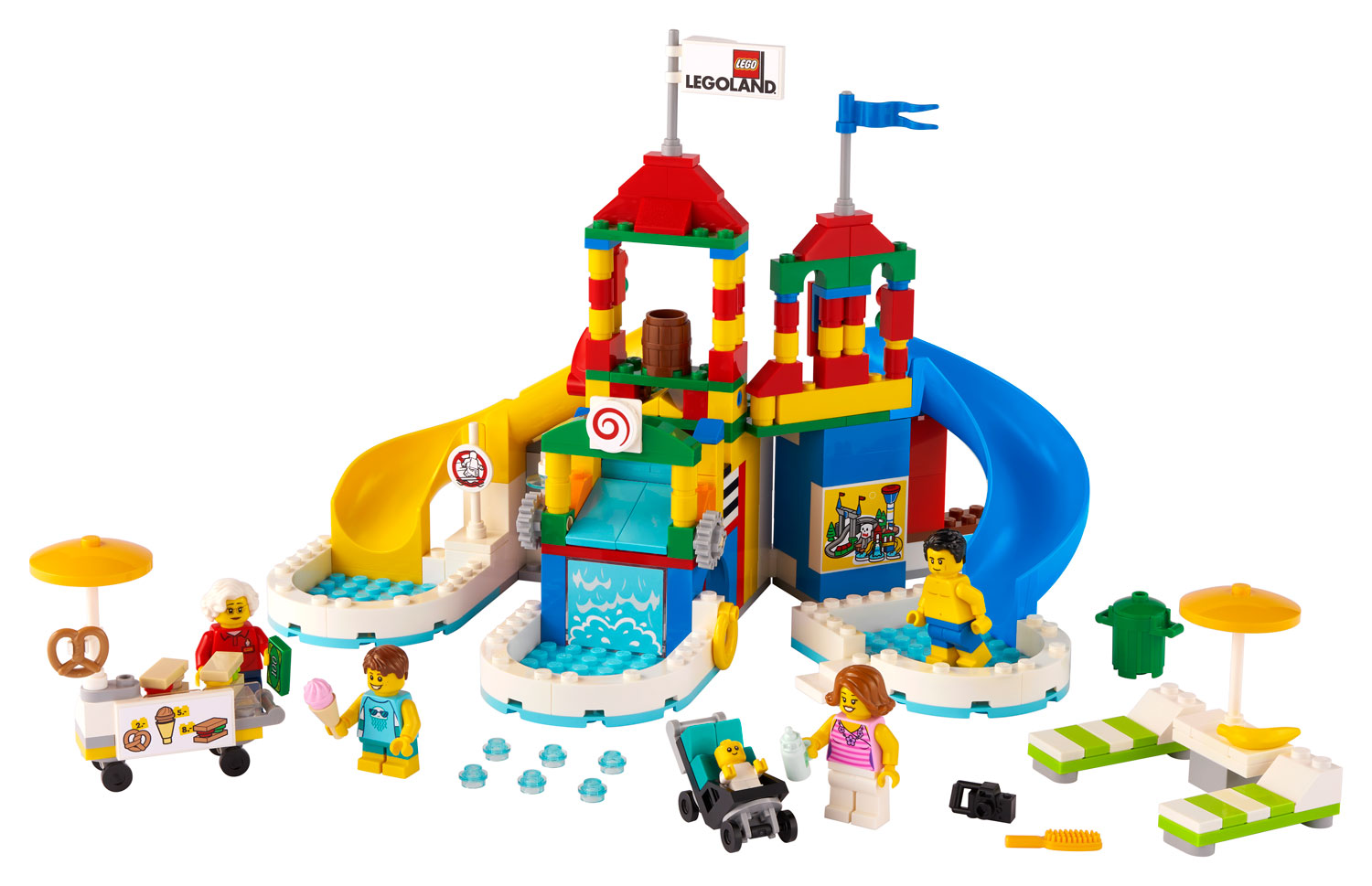 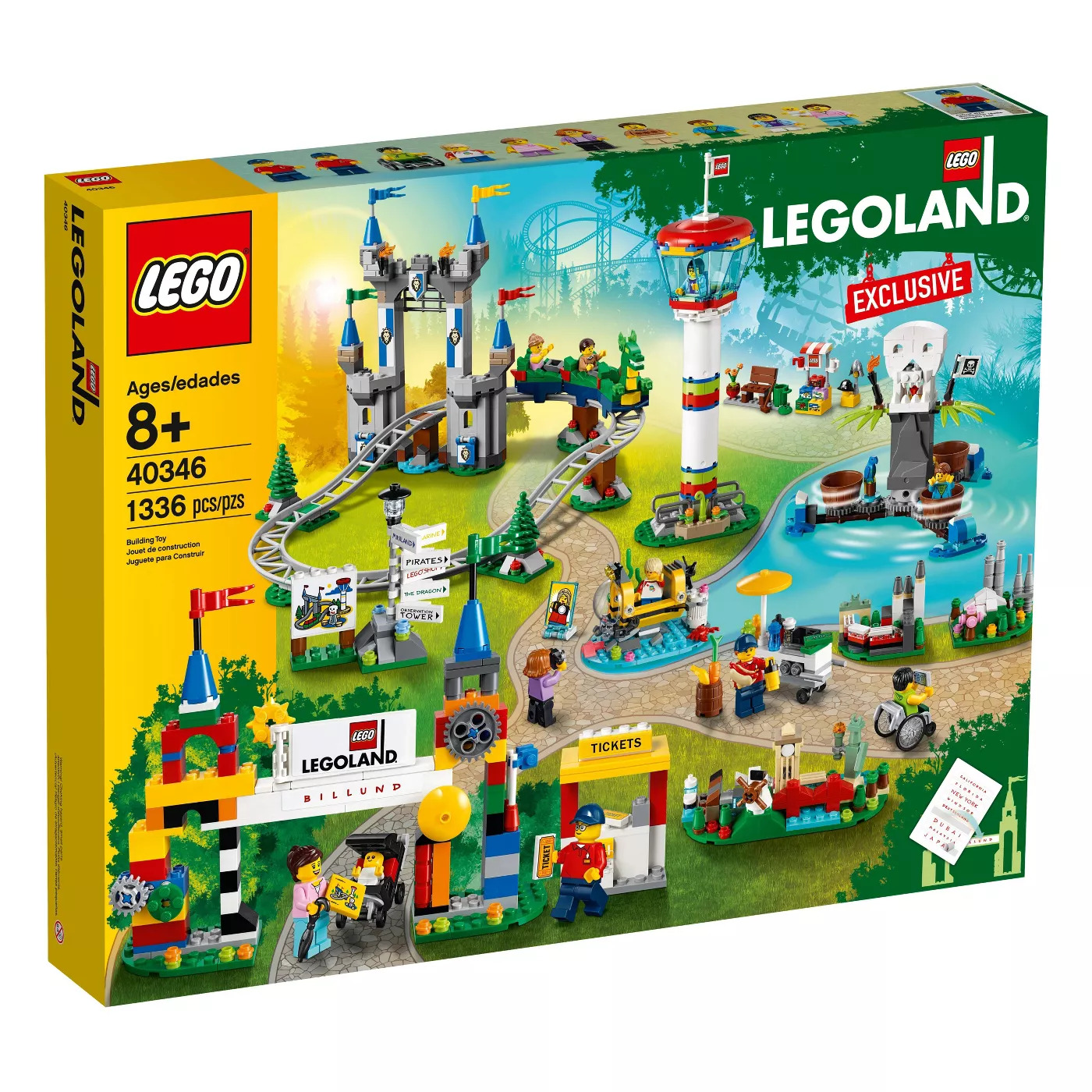 As reported last week, Target is now selling LEGOLAND exclusive sets and they have now also been added online for you to purchase. Currently, there are four sets that are available and they are listed $10 less than what they go for on the LEGOLAND online shop. In addition, you can also save 5% on your purchase if you have the Target RedCard. 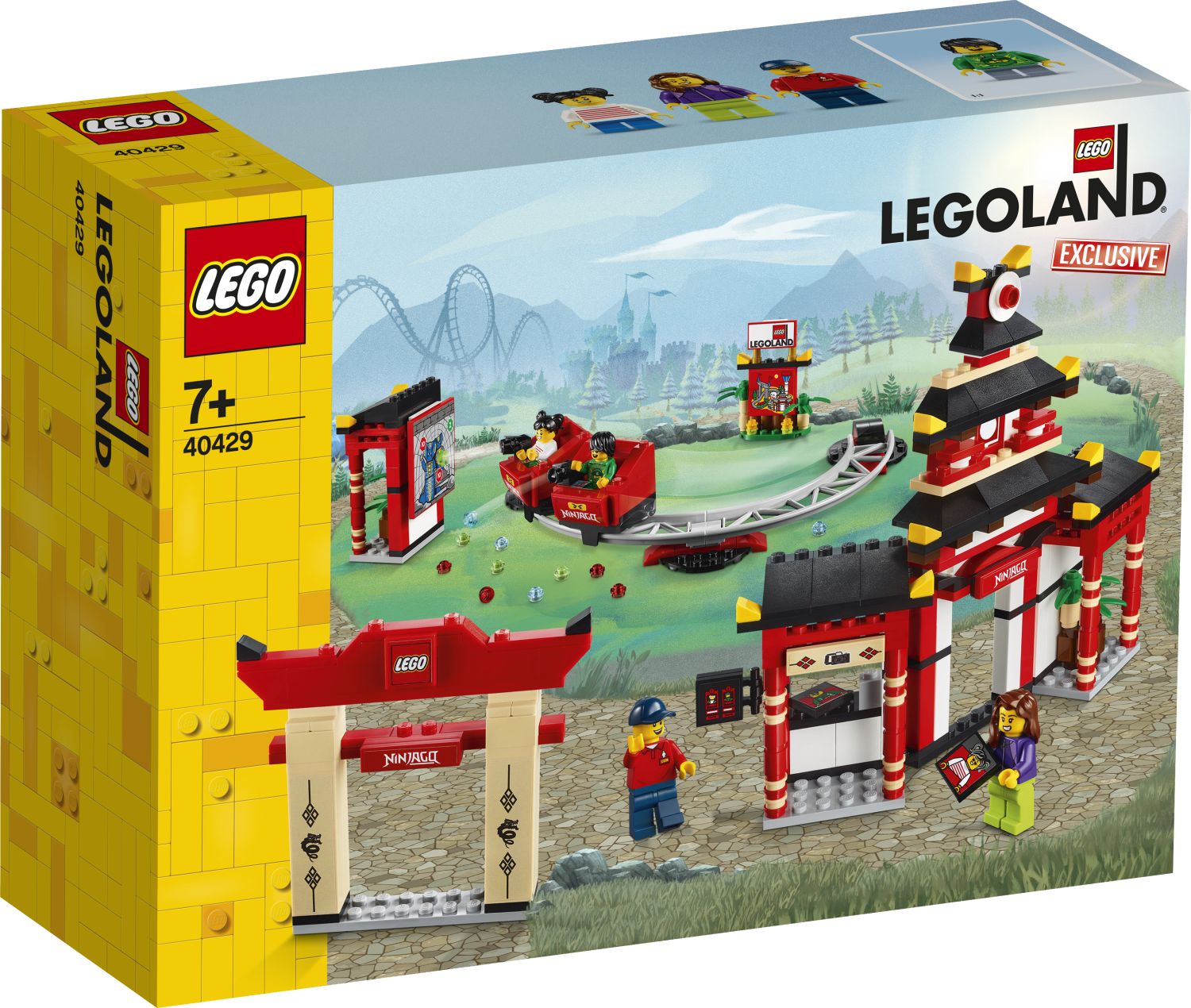 There are reports that Target will be start selling LEGOLAND exclusive sets in stores. The street date for the sets is April 11. People have been finding various LEGOLAND sets in various locations in the US including Ninjago World (40429) and the Fire Academy (40393). It also seems that Target will be selling the sets a little cheaper than at LEGOLAND’s online shops. Have you been able to find any of the LEGOLAND exclusives at Target stores yet?