When I first heard of the possible return of LEGO Castle sets late last year, I was very excited. Since I didn’t come back to LEGO until the Kingdoms line was on their way out and didn’t have a chance to get the older Castle sets from the 80’s and 90’s. Here we have the first set of the 2013 Castle sets, the Forest Ambush (70400). The set contains 90 pieces and retails for $11.99, about $0.13/piece. The contents of the box contains two unnumbered bags, and one instruction booklet. 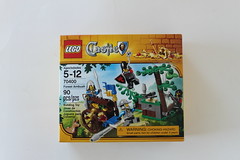 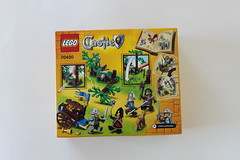 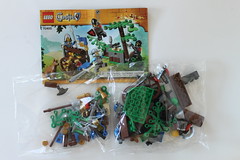 There are four minifigures in the set: 2 Lion Knights or King’s Knights and 2 Dragon Knights. There’s also a brown colored dog. One of the Lion Knights wears a blue shire with silver chain mail printing on both sides of the torso and with grey legs. He has single-sided head with a smile. He wears a silver helmet with a brim. His weapon is a spear. 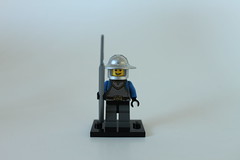 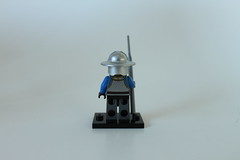 The other Lion Knight wears a blue shirt with silver breastplate printing on both sides of the torso. The front has an emblem of a crown. He also has grey legs. The head is single-sided with a grinning expression and stubble detailing. He wears a silver helmet with a neck protector. He has a sword as his weapon. 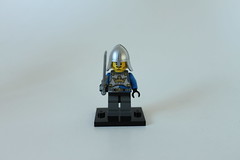 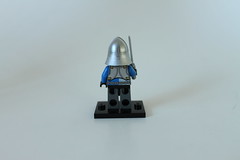 One of the Dragon Knights wears red shirt with scale mail printing on both sides of the torso and the Dragon emblem on the front. The legs are completely black. He has a double-sided head with a scowling expression on one side and an angry grin on the other. He wears a black helmet with a neck protector. He wields an axe and a shield with the Dragon emblem. 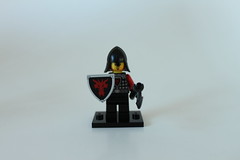 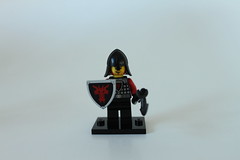 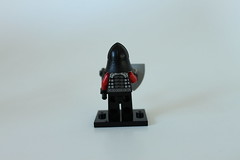 The other Dragon Knight wears a different styled scale mail which also has his house emblem on the front. Like his fellow knight, he has solid black legs. He has opened tooth grin on one side of his head and a scared expression on the other. He wears a black cheek protection helmet. He has a mace as his weapon. 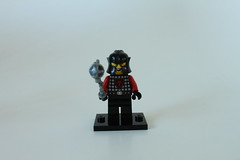 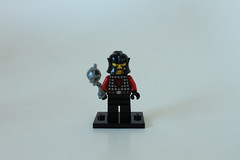 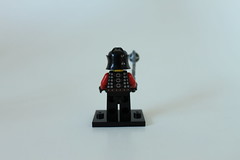 The dog is a brown German Shepherd that you’ve probably seen before in other sets. Nothing different here. 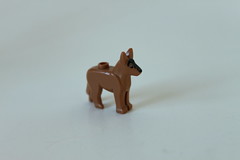 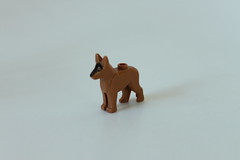 There are two parts to the build: the Lion Knight’s treasure cart and the Dragon Knight’s forest base. The two wheeled pull cart is very simple to build with places to carry the Lion’s flag as well as for a shield and weapons. The treasure chest can carry a gold goblet, green, red, and yellow jewels, and six gold coins. 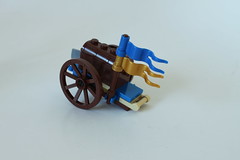 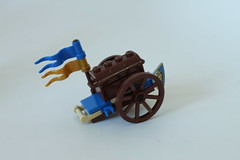 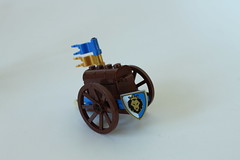 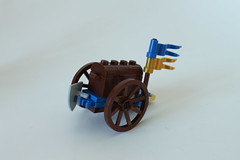 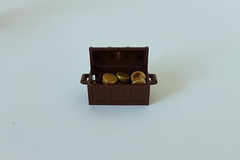 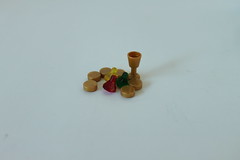 The “forest” is a little more detailed than the cart but not by much. It is actually a hidden base that the Dragon Knights use to ambush the Lion Knights. There are some little detailing like leaves and an apple to make it look like a forest. One of the features is that the branch on the side falls over to stage the ambush. There is also a place for a crossbow and a flick fire missile that represent the crossbow bolt. 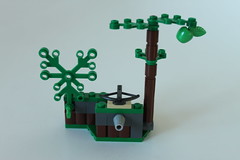 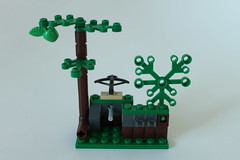 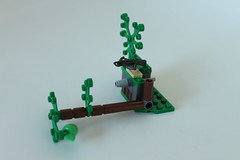 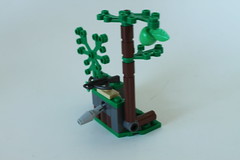 Overall, the first return set for the Castle theme is an fairly decent one. The builds of the set are pretty sub-par but that’s about what you would expect considering the amount of pieces you get. The cart is passable and the forest looks more like a bush. The set is pretty much an army building set with a good number of knights at a modest price. 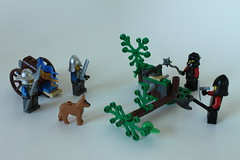 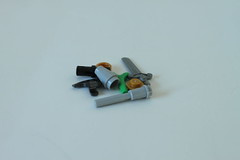