There are more rumors of Summer 2015 sets coming out of both Eurobricks and Brickset this morning. First off, Eurobricks member Cyrtanthus has provided some information on a new LEGO City Train that will be added to the Summer lineup with the Heavy-Haul Train (60098). There’s no other details of what the Heavy-Haul Train is like or how much it costs but it’s another train that you can add to your City along with the current High-Speed Passenger Train (60051) and the Cargo Train (60052).

The other rumor/confirmed news is for the LEGO Mixels sets courtesy of Brickset. Their database has been updated and both Series 5 and 6 have been listed although there’s no names for Series 5 yet. Like the previous series, there will be nine Mixels from three different tribes in each wave. 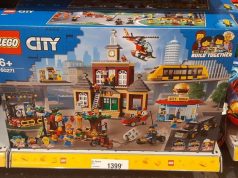