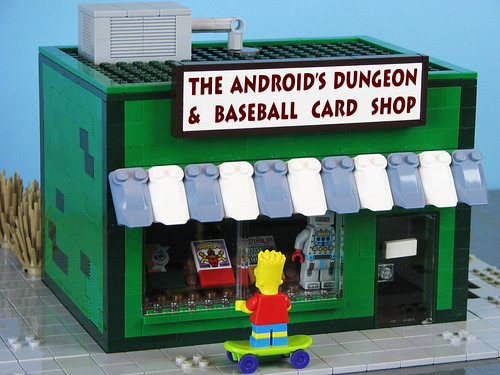 The year 2015 has just barely started but there’s already news for some 2016 stuff. Seriously?!? Anyways, Groove Bricks is reporting that the LEGO The Simpsons sets will be continuing next year with The Android’s Dungeon & Baseball Card Shop, otherwise known as the Comic Book Shop.

GB’s anonymous “source” has stated that it’ll be available next year with a price tag of $200. I’m not sure how credible this information is since I haven’t heard or read anything from the usual sources so take this info with a grain of salt. This might be jumping the gun just a tiny bit since the set for this year hasn’t even come out yet.

We already know that the LEGO The Simpsons Kwik-E-Mart (71016) will be available in April early for LEGO VIP members and to the general public in May. If the above rumor is true, LEGO will be releasing a set every year for the foreseeable future until their license with 20th Century Fox runs out.

So there you have it. You guys think this could be happening or are you squinting your eye like me and being pretty skeptical about it (for now)?

**Note: The above image is not the rumored The Android’s Dungeon & Baseball Card Shop. It is actually a MOC by Matt “Pepa Quin” De Lanoy for his version of Springfield that was displayed at BrickWorld Chicago 2014.**