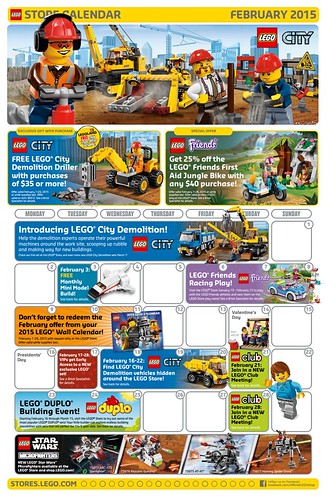 January isn’t even here yet but the February 2015 LEGO Store Calendar is now available for viewing. We already reported on some of the promos and releases that LEGO will be having a few days ago but we’ll touch on them again for those who didn’t get a chance to read it. The list pretty much confirms what February 2015 has in store.

On February 3rd, the Monthly Mini Model Build will be a very cool Space Shuttle. It’ll go great with the Alien and Space Dog from January’s build.

Continuing from January until February 15, there is a LEGO Friends Racing Play event at the store.

From February 17-28, LEGO VIP members can get early access to the new LEGO Marvel Super Heroes UCS Avengers Helicarrier (76042) as confirmed by our list.

From February 16-22, there is a LEGO City Demolition Search and Find at the LEGO Store. Find hidden sets around the store and get a LEGO City Activity Book, while supplies last.

From February 16-March 15, there are a LEGO DUPLO Building Events to participate in.

On February 21 and 28, the LEGO Club Meeting will teach kids how to build the Space Shuttle Monthly Mini Model. This is another chance to get the set if you miss out on the building event on February 3rd. Registration is $10/child.

Finally throughout the month of February, don’t forget to redeem your FREE Hoth Han Solo Minifigure (5001621) with any LEGO Star Wars purchase. 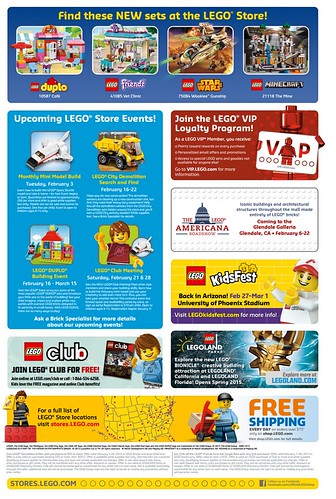