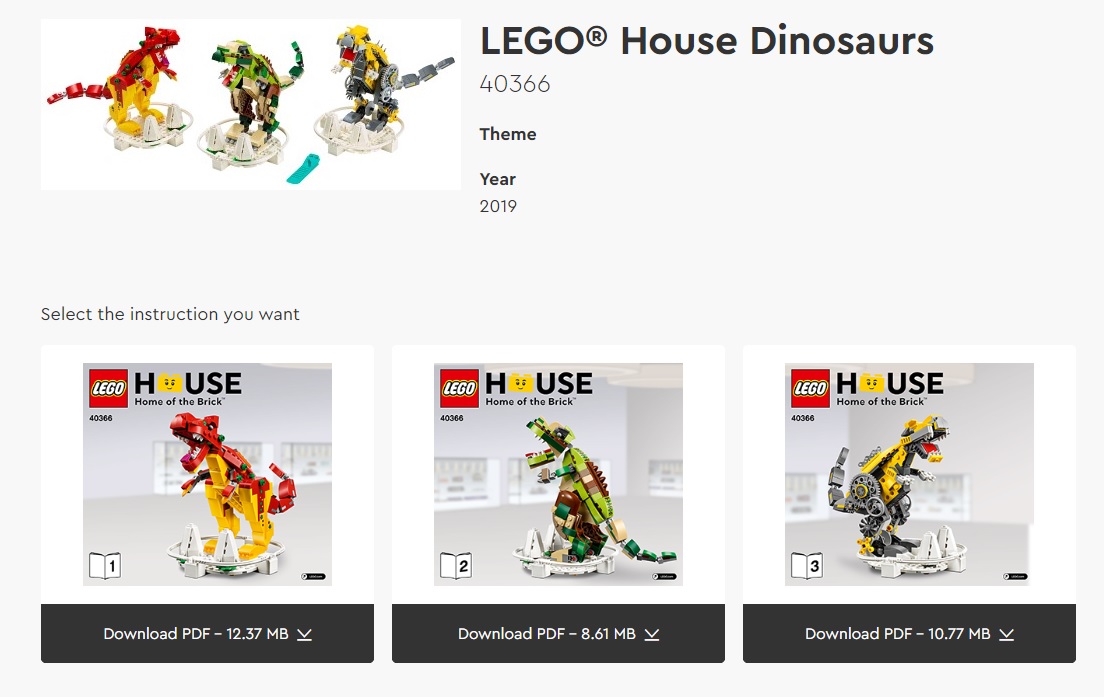 I know a lot of us are disappointed that we aren’t able to get the LEGO House Dinosaurs (40366) here in the US but our consolation is that LEGO has provided the instructions for us to build our own. Each of the dinosaurs have their own PDF and none of the parts are exclusive to this set. However, there are a number of them that are still very rare and don’t appear in many other sets but you can substitute them if they aren’t on the exterior areas of the build.

LEGO has announced the next LEGO House exclusive set this morning with the Dinosaurs (40366). Many of you guys guessed correctly yesterday and it will be available on April 17 only at the LEGO Store at the LEGO House. Check out the press release below.

Three giant LEGO® dinosaurs greet visitors when they climb the stairs to the Experience Zones of the LEGO House. Available from April 17th as a retail set.

Positioned in The Masterpiece Gallery the three iconic dinosaurs are the stunning centrepieces of the room. Each model has a metal skeleton inside to support the LEGO bricks, the height of each models is 2,92 m (without podium) and the total piece count of the three models is more than 600.000 LEGO bricks. Now LEGO House has taken on the challenge to convert the three giant dinosaurs into a retail product.

The retail product, LEGO® House dinosaurs, will be launched at the LEGO Store in LEGO House this summer. And if everything goes as planned the first boxes will already be for sale from 17th April.

The LEGO model is a great reproduction of the giant dinosaurs capturing all the most iconic features in a rescaled version.

Designer Nina Koopman says: ”One of the biggest challenges with the new model has been to capture all the details from the big models. Especially since the models in Masterpiece Gallery were all built of the three different building systems LEGO DUPLO, LEGO Technic and LEGO System. You see it especially with the yellow dino where we