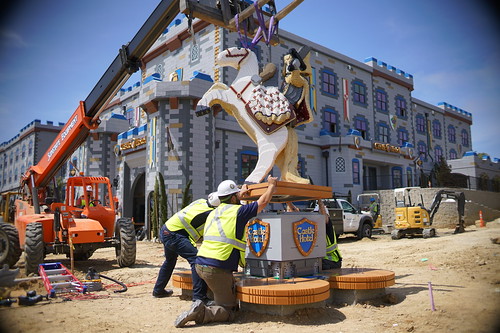 CARLSBAD, Calif. (April 6, 2018) – With just 20 days to the grand opening of the new LEGOLAND® Castle Hotel at LEGOLAND® California Resort, Master Model Builders are installing the final LEGO® models for guests to enjoy. There will be more than 2,000 LEGO models in all, with the largest model being a Royal Statue featuring a king, queen, jester, knight, wizard and princess. It took more than 1200 hours to create and is made out of more than 250,000 LEGO bricks. 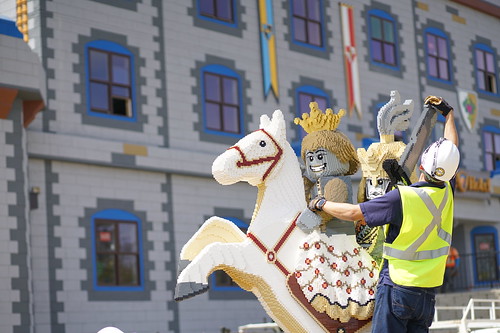 Knights, Princesses and Wizards aren’t the only ones who will be entertaining guests at the 250-room regal hotel…LEGOLAND Castle Hotel is still hiring for the 250 overall jobs needed. Servers, bartenders, cooks, managers, bussers and more are being hired right now for the Dragon’s Den Restaurant and interested applicants can apply at www.LEGOLAND.com/WorkatCastleHotel LEGOLAND Castle Hotel officially opens to the public on April 27, 2018. 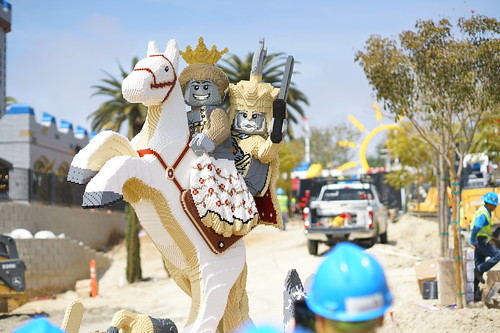 We partner with Rakuten Advertising, who may collect personal information when 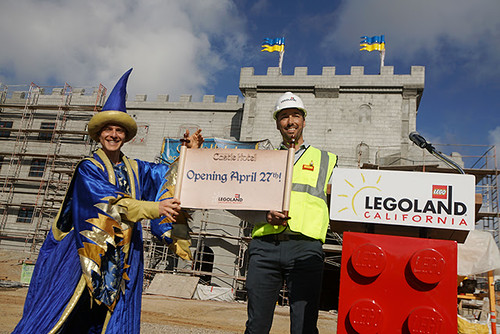 LEGOLAND California has announced the official opening date for the new LEGOLAND Castle Hotel will be on April 27. This will be the first Castle Hotel in North America and it will consist of 250 deluxe rooms. Reservations are now happening if you want to book a room for this spring or summer. Check out the press release below.

“It’s hard to imagine that just five years ago we were standing on a construction site just like this announcing North America’s first LEGOLAND Hotel which has proven to be extremely popular with our guests,” said Idris. “In fact, it was just named one of Trip Advisor’s top 25 Hotels for families in the United States! And, we achieved our goal of becoming the first hotel in Carlsbad to achieve the Environmentalist level from the California Green Lodging Association thanks to all of the additional conservation efforts that were implemented this past year.“ 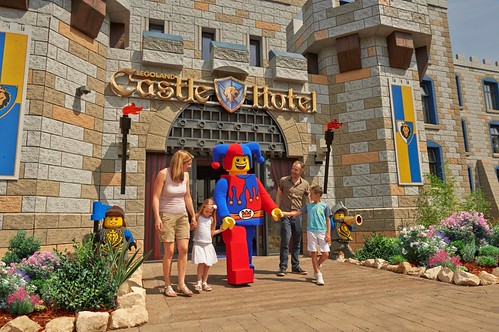 LEGOLAND California has announced that they are now taking reservations for the Castle Hotel for spring 2018. The Castle Hotel is will be the first in the US and it will have over two thousand LEGO models that will be on display throughout the hotel. You can check out the first model the park has revealed in the video below.

LEGOLAND® CASTLE HOTEL AT LEGOLAND® CALIFORNIA RESORT IS TAKING RESERVATIONS FOR THE SPRING AND REVEALS FIRST LEGO® MODEL BUILT FOR THE NEW HOTEL!

CARLSBAD, Calif. (Dec. 20, 2017) – Want to give a child a gift they’ll never forget? Invite them to be one of the first to stay at LEGOLAND® Castle Hotel when it opens in spring 2018! While construction teams work to build the nation’s first LEGOLAND Castle Hotel, Master Model Builders are working just as rapidly building the more than 2,100 LEGO® models for the Hotel including the iconic model of the royal statue that will greet guests as they arrive.

A team of Master Model Builders spent 1,243 hours creating this statue that represents all of the key figures of the LEGOLAND Castle Hotel in one monument: A Wizard, Princess, Jester, Knight, King and Queen are all represented in front of the 250-room, entirely castle-themed hotel. The LEGO model is created from 251,565 LEGO pieces, weighs 1,563 pounds and took 750 hours to develop and build! In fact, because of the size of the model, it took 133 hours to carefully disassemble it and pack it up to ship to Carlsbad, California