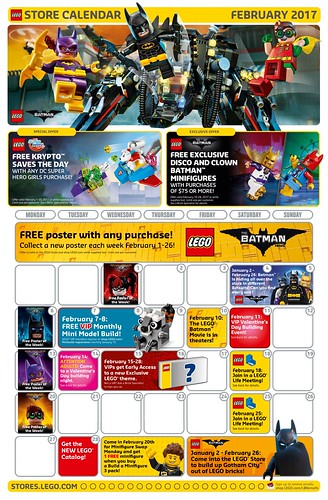 LEGO has finally uploaded the February 2017 LEGO Store Calendar and we can now see the promotions and events that will be taking place during the month. We’ve already taken a look at some of these but I’ll elaborate again.

February 10-28 – Free exclusive The LEGO Batman Movie Disco Batman/Tears of Batman (30607) polybag with purchases of $75 or more, while supplies last.

January 2 – February 26 – Find all the Batman variants in the store and get The LEGO Batman Movie Accessory Pack.

February 7-8 – VIP Monthly Mini Model Build will be a Raccoon.

February 10 – The LEGO Batman Movie is in theaters.

February 14 – Adult Building Night from 6-8pm for a Rose.

February 15-28 – VIPs get Early Access to a new exlusive LEGO theme which will be the LEGO BrickHeadz. LEGO has already released an app for the theme.

February 20 – Minifigure Swap Monday. Get 1 Free minifigure when you buy a Build-a-Minifigure 3 pack. 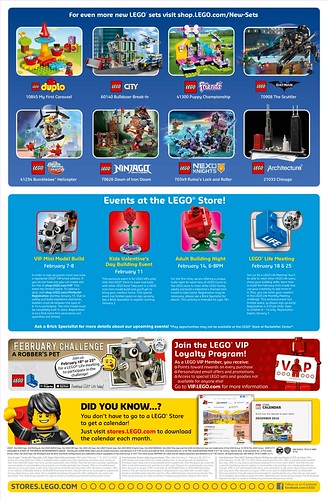