Last month featured the release of a neat little app called Mini Mi and yesterday the developers released Version 1.1 for the app. The update makes the app runs much faster and a lot lighter on your devices. There were also some bugs that were fixed as well. In addition, you can now use the Mini Mi app on older iPod Touch devices. The devs are currently working on their next update which will include a native iPad version and also more expansion packs. Android fans will also be glad to know that the developers are working on an app for those devices.

The app is compatible with iPhone 3GS, iPhone 4, iPhone 4S, iPhone 5, iPod touch (3rd generation), iPod touch (4th generation), iPod touch (5th generation) and iPad and requires iOS 6.0 or later. Expansion packs are $0.99 each but you can unlock all of them for $3.99. Did you know there are also secret codes that you can enter to get items for you Mini Me? Here’s a couple of them if you didn’t get them yet: “ledzep”, “minico”, “thewho”, and “sinvdr andcello”. Just follow the instructions below and enter the codes without the quotes to get your item(s). New codes are revealed on their Facebook and Twitter every Tuesday and Thursday. 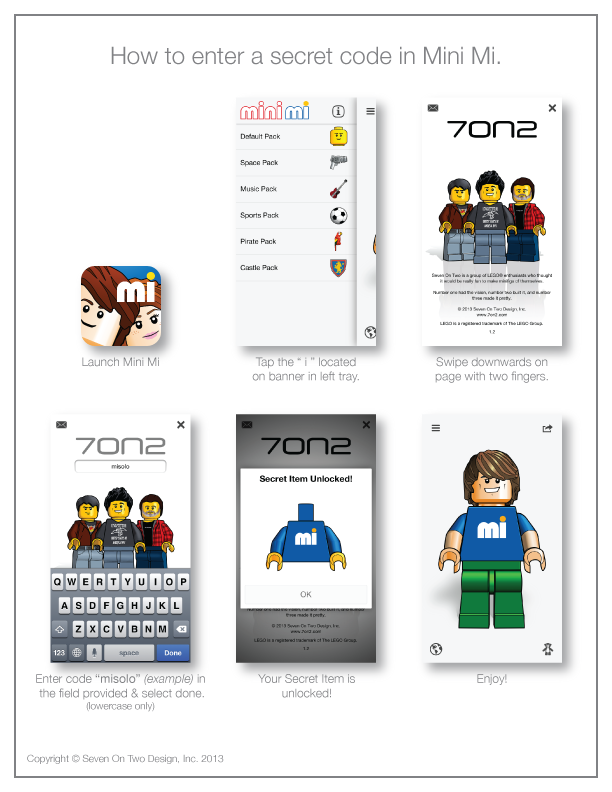 The Brick Fan is a participant in the