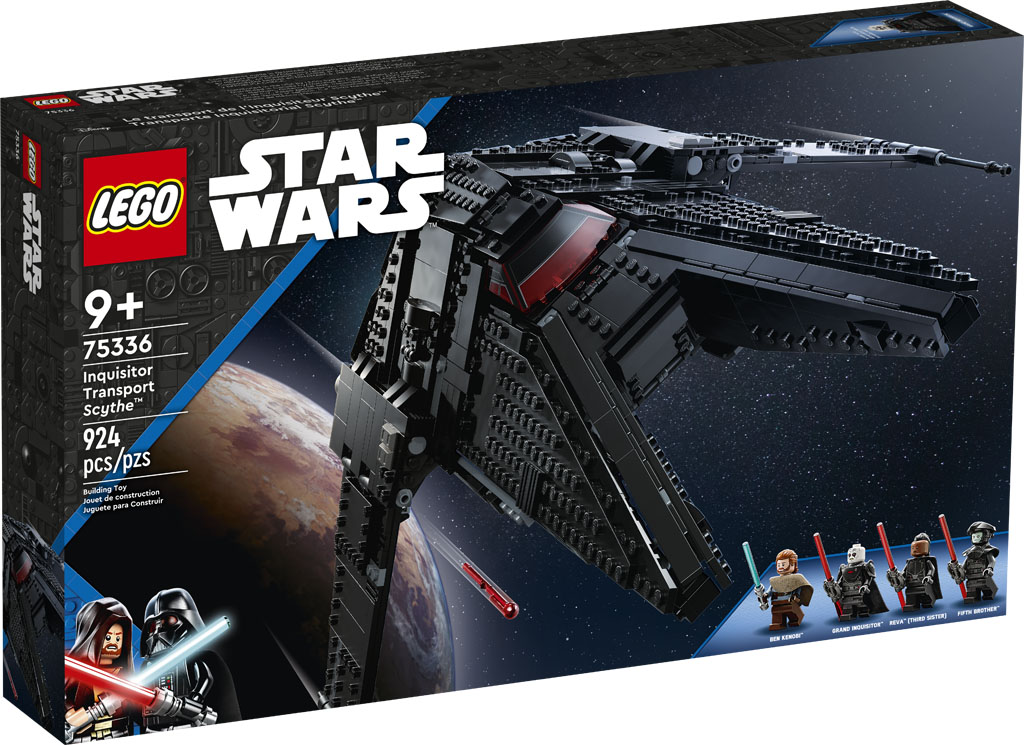 LEGO has officially revealed three new LEGO Star Wars sets for Obi Wan Wednesdays. Don’t worry if you’re not going as they will all be available on the LEGO Shop. The sets include the BrickHeadz Obi-Wan Kenobi & Darth Vader (40547), Obi-Wan Kenobi’s Jedi Starfighter (75333), and the Inquisitor Transport Scythe (75336) from the upcoming Disney+ series. You can pre-order the set starting today (links below) on the LEGO Shop and it’ll be available at other retailers on August 1. 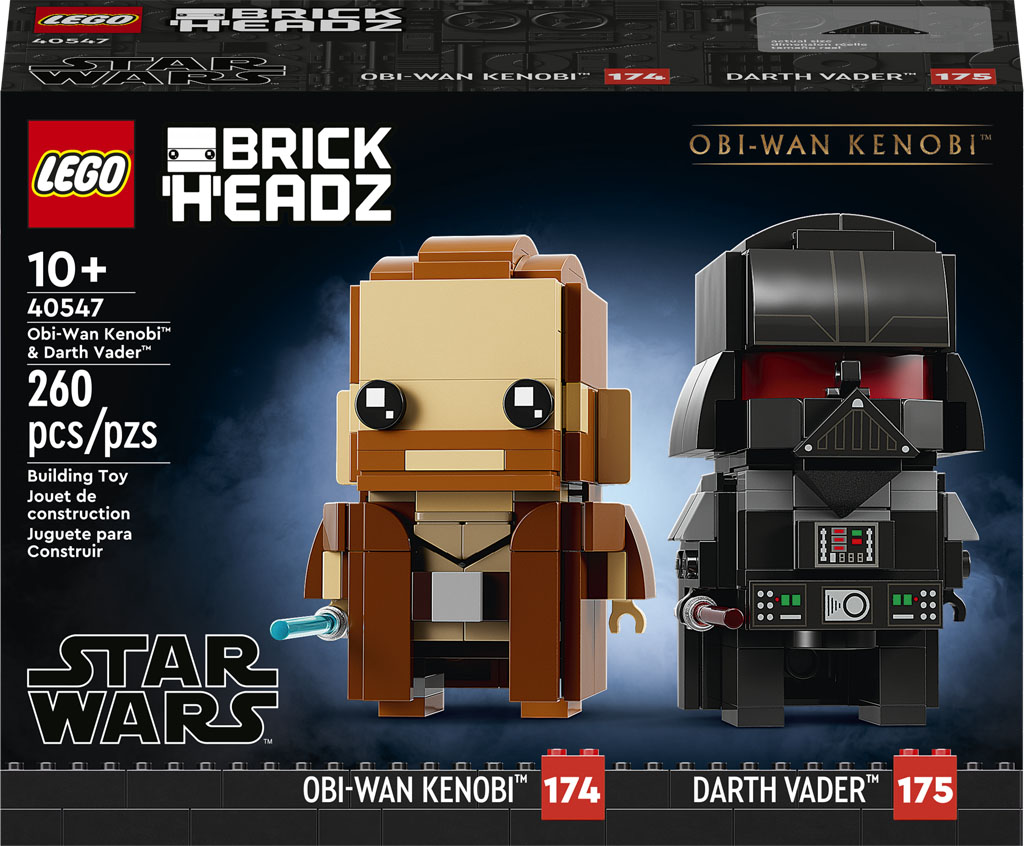 Build the Force of good and evil!

Fans can relive dramatic Star Wars: Obi-Wan Kenobi scenes as they build LEGO® BrickHeadz™ versions of iconic characters Obi-Wan Kenobi and Darth Vader. The Force is strong with this duo– authentic details include Darth Vader’s red eyes and a lightsaber for each buildable LEGO® figure, plus baseplates for display. This creative building toy is suitable for ages 10 and up and would make an awesome addition to any Star Wars™ fan’s collection. 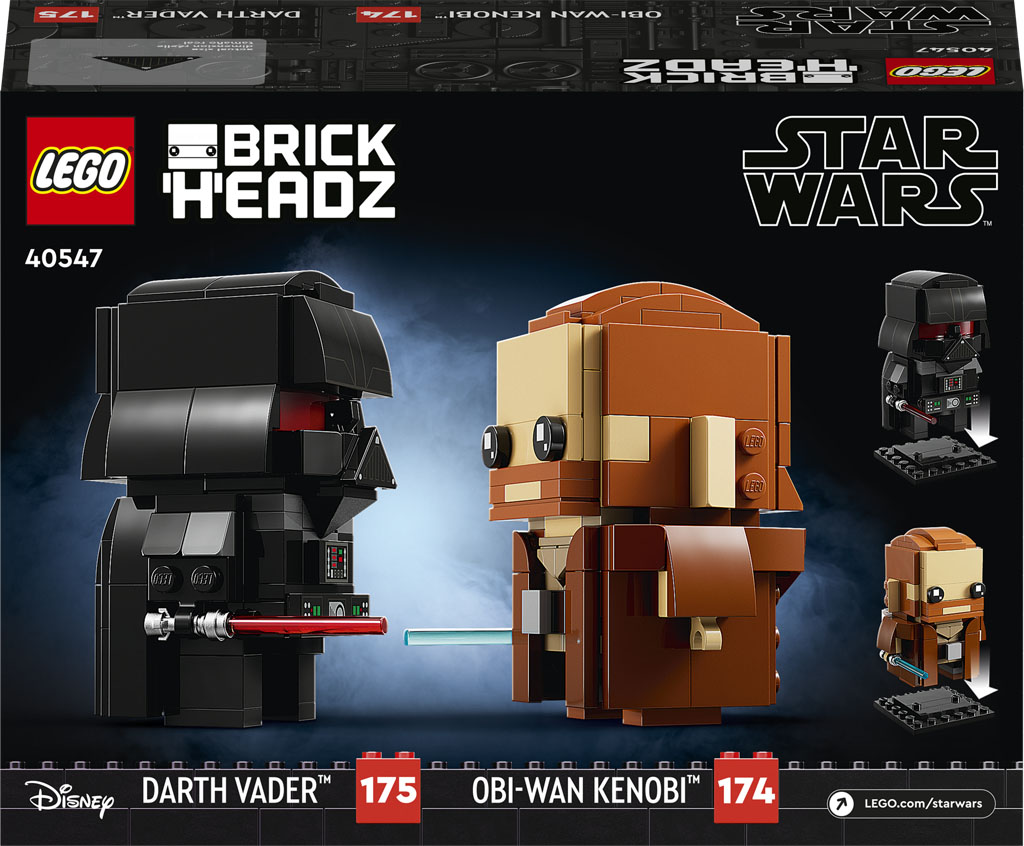 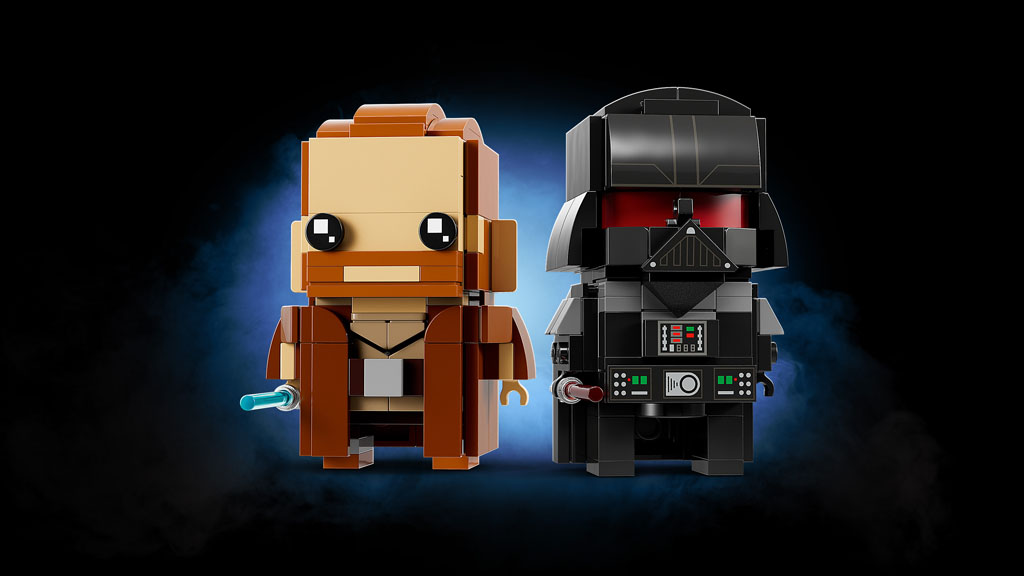 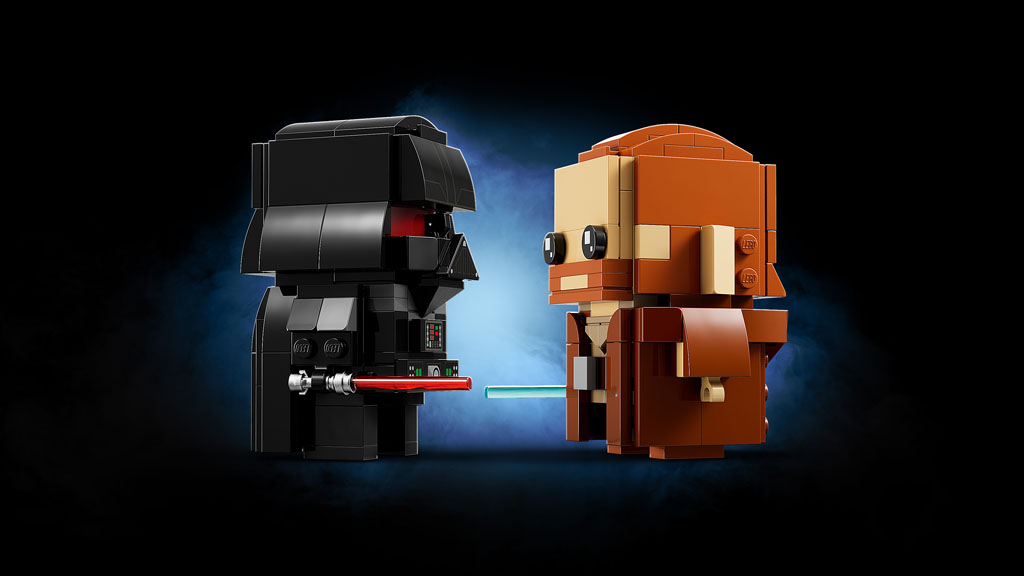 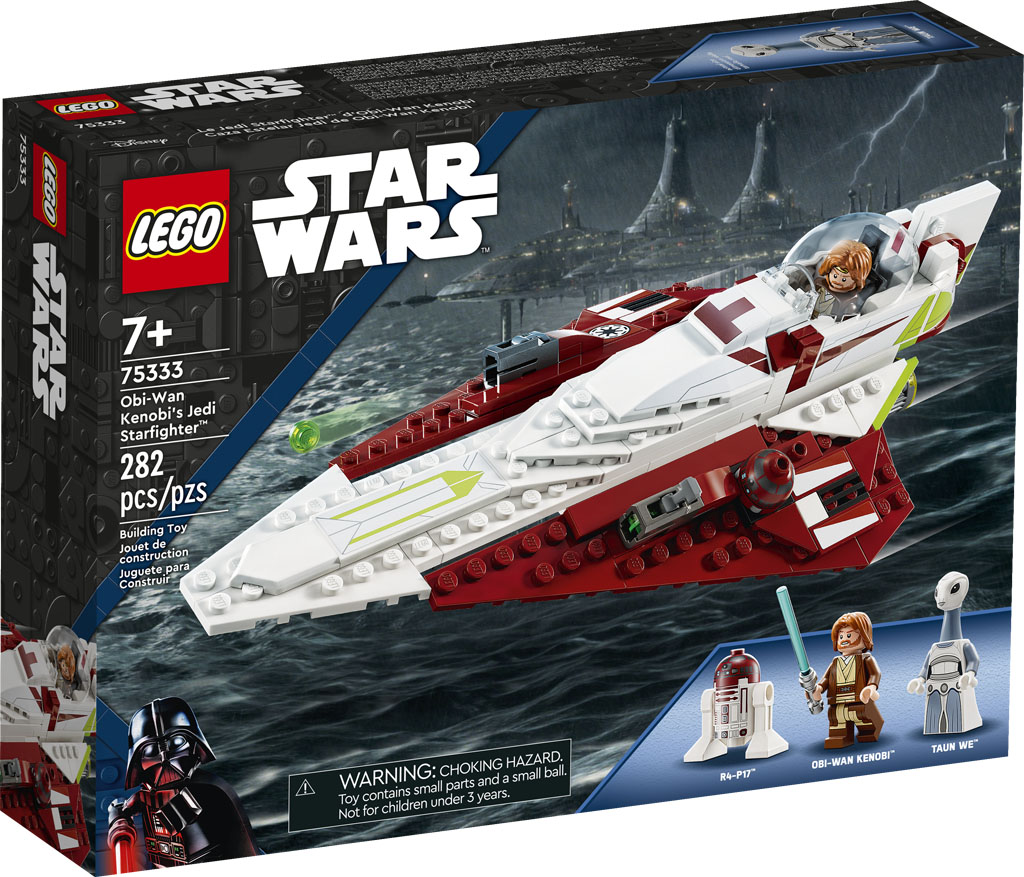 Star Wars: Attack of the Clones fans may use the Force to build this LEGO® brick model of Obi-Wan Kenobi’s Jedi Starfighter (75333). An exciting gift for kids aged 7 and up, it features an opening minifigure cockpit for Obi-Wan, 2 stud shooters, retractable landing gear, lightsaber storage clips and an attachment point on the wing for droid R4-P17’s head.This buildable toy playset includes 2 LEGO Star Wars™ minifigures: Obi-Wan and, for the first time ever, the KaminoanTaun We, plus the R4-P17 astromech droid LEGO figure to inspire creative role play.

Interactive construction
Step-by-step building instructions are included with this set. And check out the LEGO Building Instructions app, which has intuitive zoom and rotate viewing tools to enhance the creative experience.

Cool building toys
The LEGO Group has been recreating iconic starships, vehicles, locations and characters from the Star Wars universe since 1999, and there is a huge assortment of sets to delight fans of all ages.

• Brick-built model of Obi-Wan Kenobi’s Jedi Starfighter (75333) – Fans can relive epic Star Wars: Attack of the Clonesscenes as they build and play with this LEGO® Star Wars™ starfighter.
• 2 LEGO® minifigures including, for the first time, Taun We – Obi-Wan Kenobi, with a lightsaber, and Taun We, plus an R4-P17 astromech droid LEGO figure
• Built to inspire play – The starfighter has an opening minifigure cockpit, 2 stud shooters, retractable landing gear, lightsaber storage clips and an attachment point on the wing for R4-P17’s head
• Gift idea for fans ages 7 and up – Give this 282-piece building toy as a birthday present or holiday gift to Star Wars: Attack of the Clones fans and LEGO® Star Wars™ collectors
• For play and display – The brick-built Star Wars™ starfightermeasures over 2.5 in. (7 cm) high, 10 in. (25 cm) long and 5 in. (13 cm) wide, and can be displayed between playtime adventures 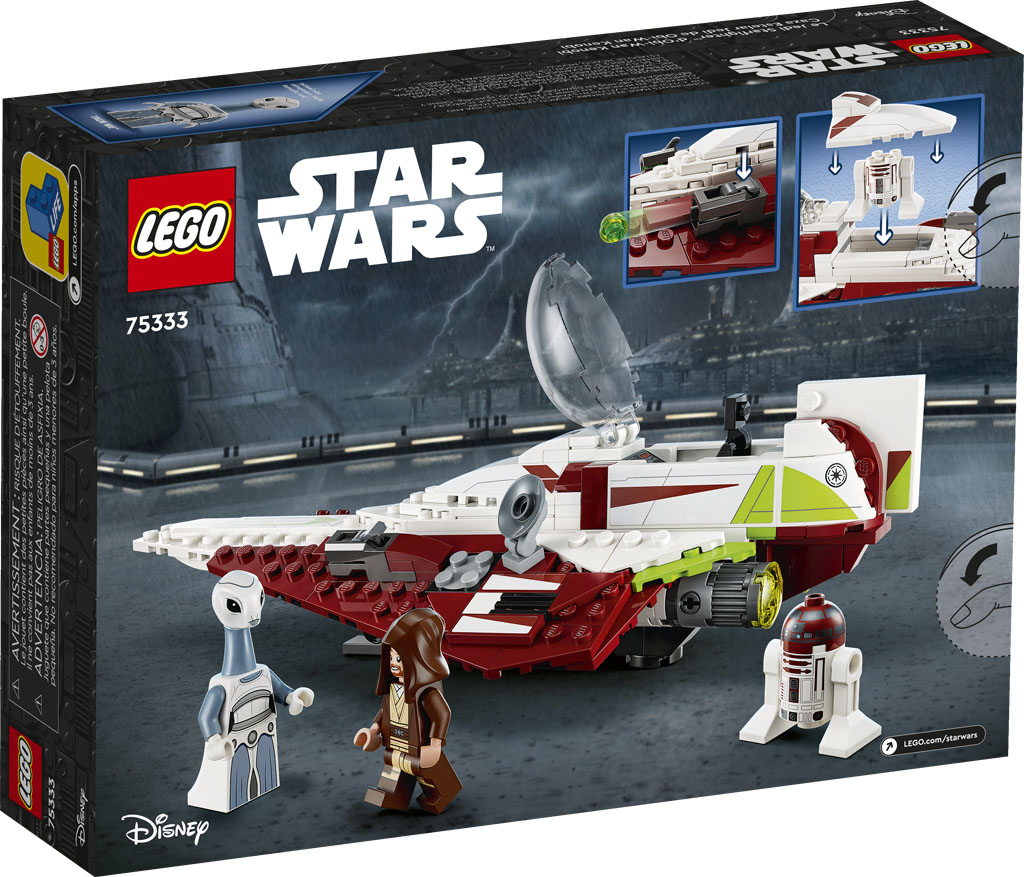 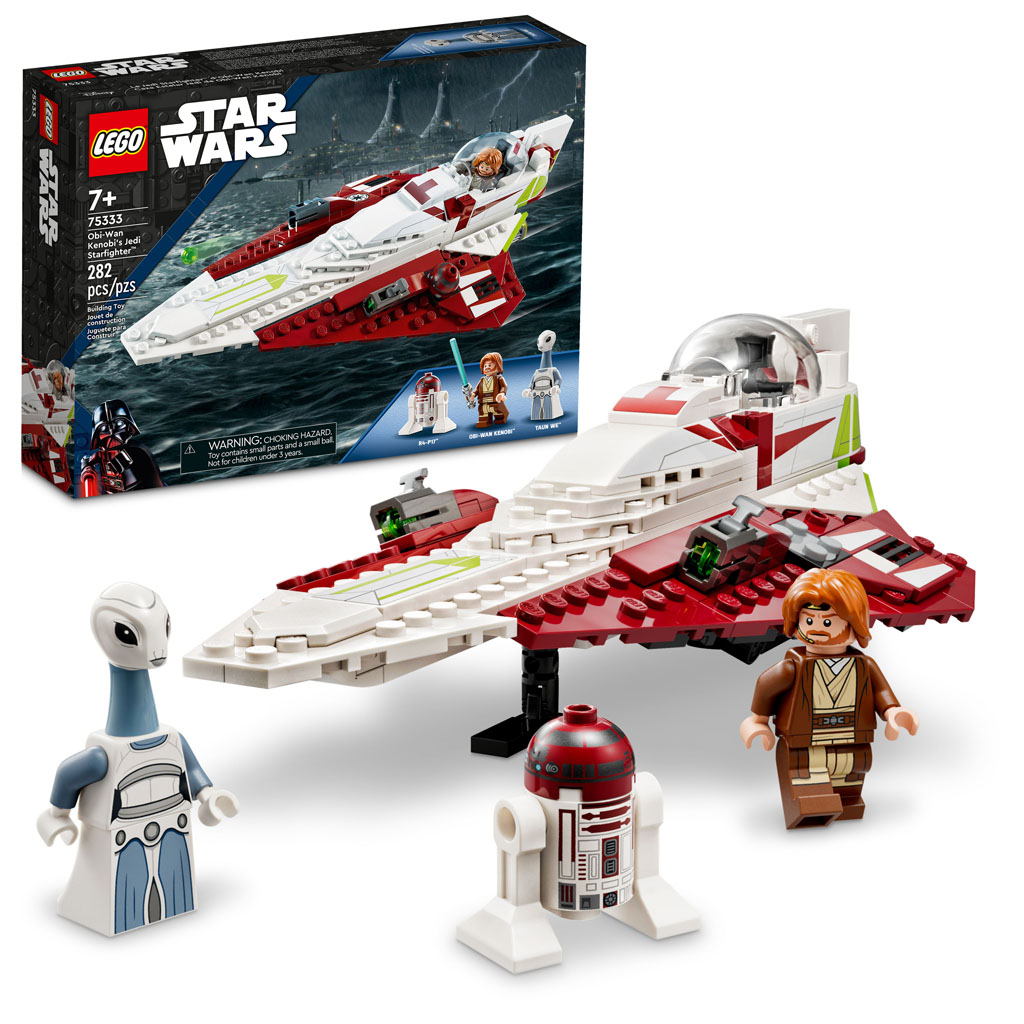 Kids can play out Jedi-hunting missions from Star Wars: Obi-Wan Kenobi with LEGO® Star Wars™ Inquisitor Transport Scythe (75322). This buildable toy starship features adjustable wings for flight and landing modes, 2 spring-loaded shooters and an access ramp. The cockpit opens for easy viewing of the detailed interior which has 3 minifigure seats and storage clips for lightsabers. There are also LEGO minifigures of Obi-Wan Kenobi, the Grand Inquisitor, Reva (Third Sister) and the Fifth Brother with lightsaber weapons for creative role play.

Digital building tools
A cool Star Wars gift idea for trend-setting kids aged 9 and up, the set includes building instructions. And check out the LEGO Building Instructions app, which has zoom and rotate viewing tools to enhance the creative experience.

Awesome construction toys
The LEGO Group has been recreating starships, vehicles, locations and characters from the Star Wars universe since 1999, and there is a wide variety of sets to inspire fans of all ages.

• Detailed, brick-built model of Inquisitor TransportScythe (75336)–Star Wars: Obi-Wan Kenobifans can play out dramatic battles between Imperial Inquisitors and Obi-Wan with this building toy
• 4 LEGO® Star Wars™ minifigures – Obi-Wan Kenobi with a blue lightsaber, plus the Grand Inquisitor, Reva (Third Sister) and the Fifth Brother, each with double-bladed red lightsabers
• Authentic features –Inquisitor TransportScythe has wings that fold up and down for landing or flight mode, 2 spring-loaded shooters and a fold-down access ramp at the front
• Easy access to the detailed interior – The top and sides of the cockpit open to reveal a pilot seat and 2 passenger seats for minifigures, plus storage clips for their lightsabers
• Gift idea for ages 9 and up – Give this 924-piece building toy as a birthday present or holiday gift to kids who are intoStar Wars: Obi-Wan Kenobi or just love Star Wars™ starships
• For play and display – This buildable LEGO® Star Wars™ starship toy measures over 5.5 in. (14 cm) high, 14.5 in. (37 cm) long and 9.5 in. (24 cm) wide, and can be displayed between playtime missions 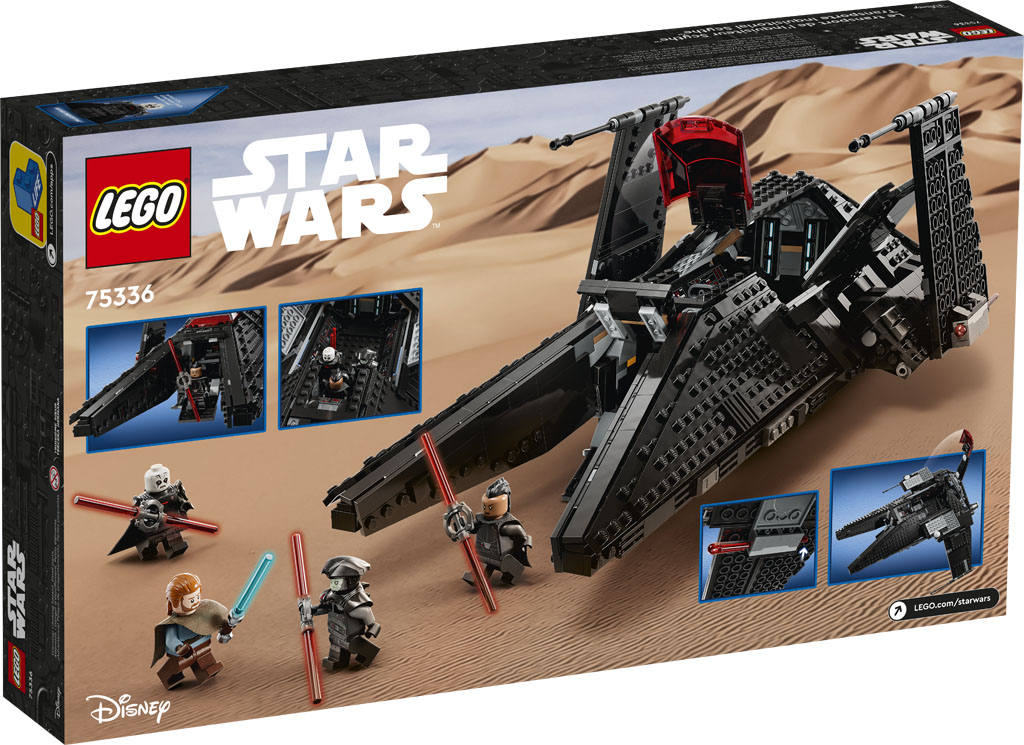 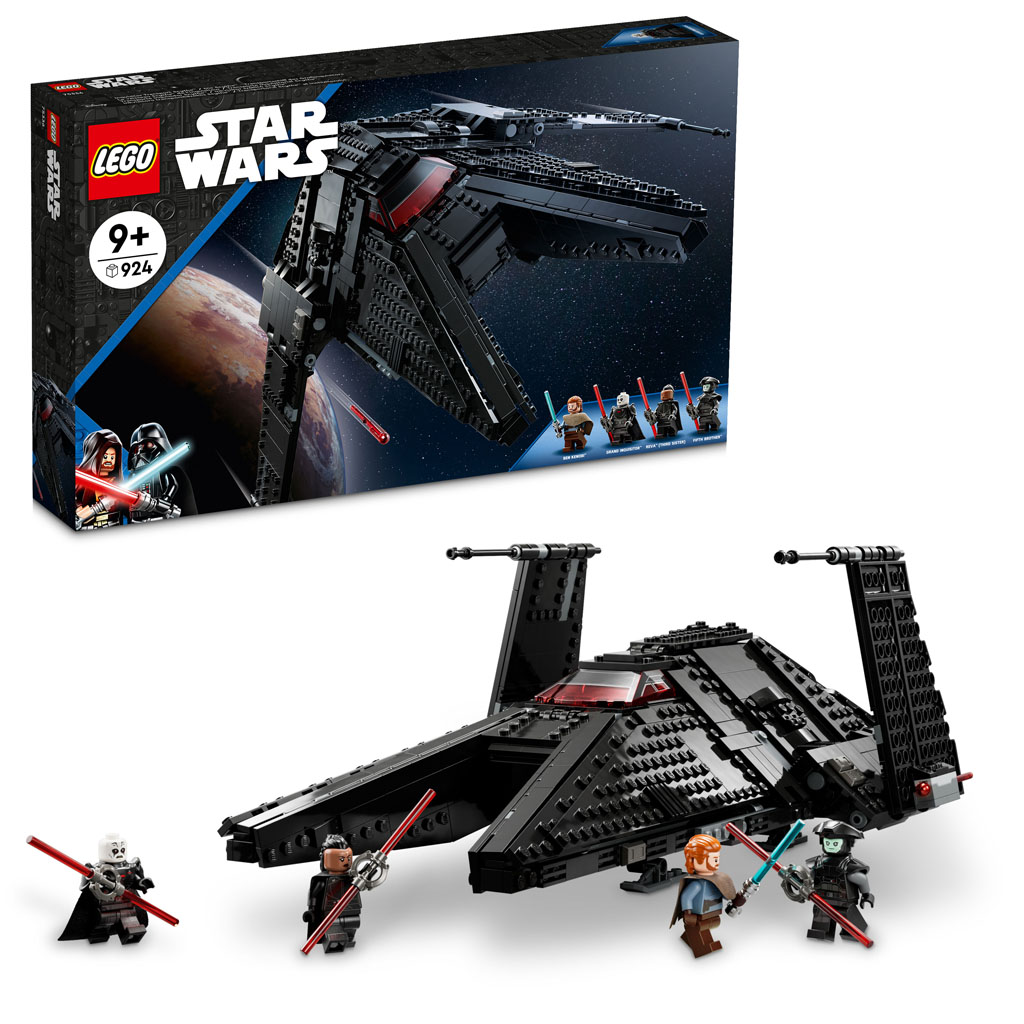 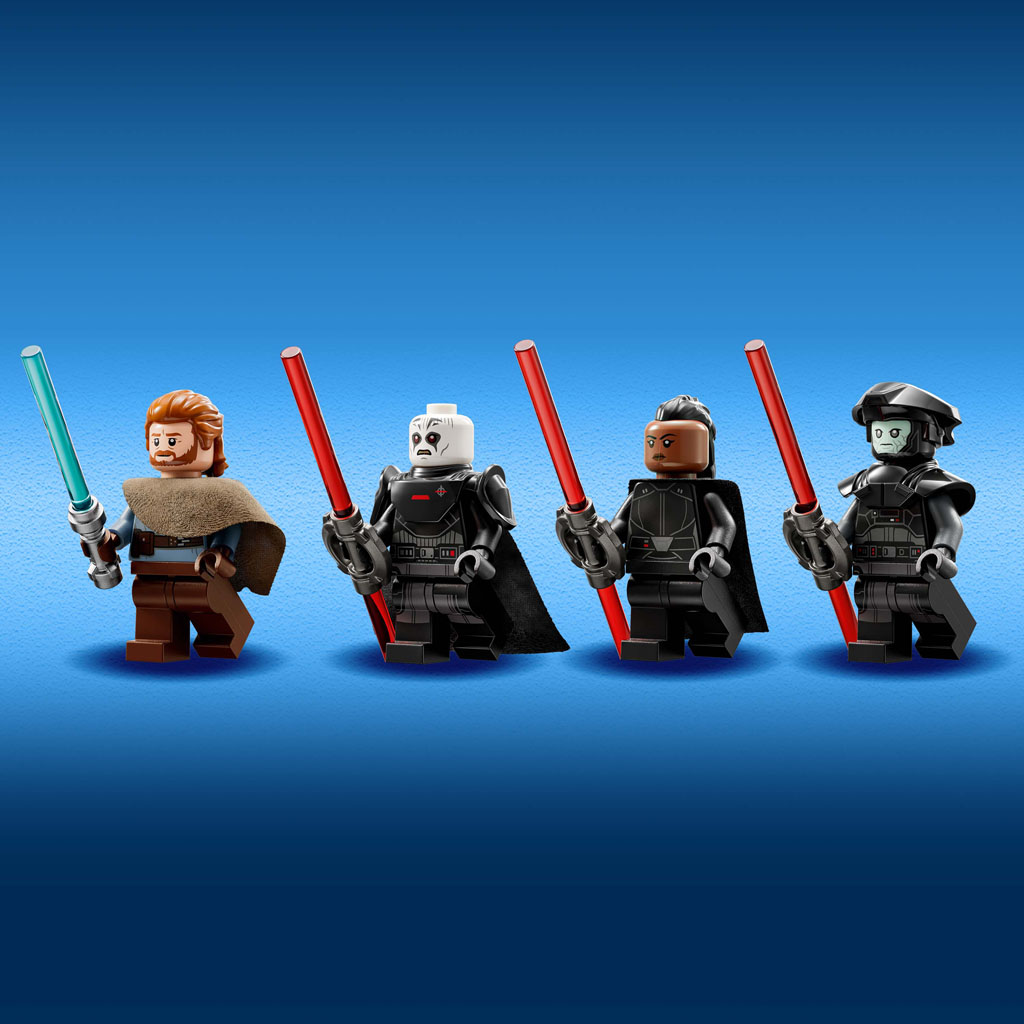