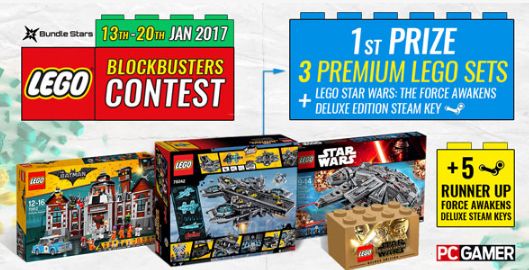 If you want to win some awesome LEGO prizes, PC Gamer and Bundle Stars are teaming up to give away some. Bundle Stars is doing a LEGO Pick & Mix Bundle from January 13-20 where you can mix and match three LEGO games for $9.99.

What’s more interesting is that they are also giving away Steam keys for LEGO Star Wars: The Force Awakens Deluxe Edition as well LEGO sets including The LEGO Batman Movie Arkham Asylum (70912), LEGO Star Wars Millennium Falcon (75105), LEGO Marvel Super Heroes The SHIELD Helicarrier (76042). The first place winner will get all three sets plus the Steam key for the game while five runner ups will get the keys.

Head on over to this link to enter.