The Flying Dutchman becomes the latest project to achieve 10,000 supporters on LEGO Ideas. The project by Sebeus narrowly sneaks into the Third 2014 Review Stage with the deadline only three days away.

The Flying Dutchman is based on Davy Jones’ famous cursed ship which was featured in Pirates of the Caribbean: Dead Man’s Chest and At World’s End. Some details inside the ship include the Captain’s quarters with an organ.

The project is part of the last two that have reached the Review Stage which have been holdovers from LEGO CUUSOO. It now joins the Avengers Helicarrier, the Labyrinth Marble Maze, the F7A, The Goonies 30th Anniversary Inferno, The Natural History Museum, Lord of the Rings Set: Minas Tirith, Jurassic Park, and Piano as part of the lineup that is qualified for the Third 2014 Review Stage. 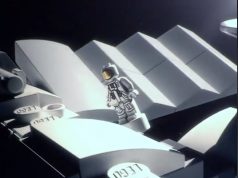