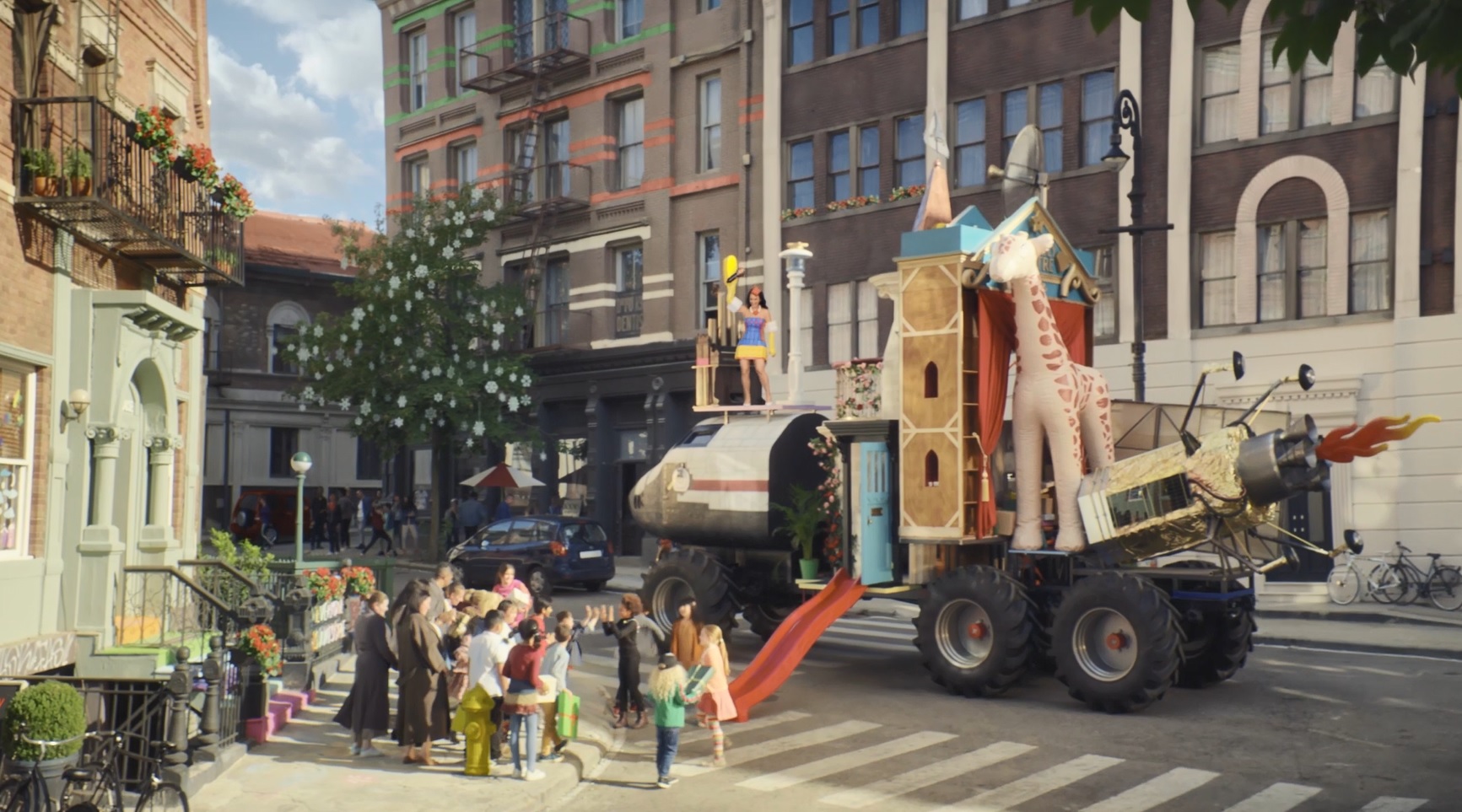 LEGO has announced that they are teaming up with Katy Perry for a new Rebuild the World Holiday campaign. The mystery silhouette that we saw a few days ago was a vehicle that kids created using LEGO bricks and was made into a real-life vehicle. It will be used to deliver presents during the holiday season.

In addition, the annual #BuildToGive campaign will be returing this year and LEGO is looking to donate two million sets to children in hospitals, children’s homes, and vulnerable communities. All you have to do is buiding something and share it on social media using the hashtag #BuildToGive before the end of the year.

The LEGO Group hand over the reins of its Holiday campaign to children (and Katy Perry adds a few extra Fireworks!)

Billund, November 1st, 2022 (9AM CET): The LEGO Group has launched its biggest and most playful Holiday campaign to date. This year, the 90-year-old brand turned to some of the most creative minds on the planet, children, to help supercharge its festive celebrations with fun.

The children were handed creative control behind the cameras, building, unbuilding and rebuilding what the Holidays mean to them. Rather than picture-perfect shots of snow, exquisitely set tables full of festive feasts, and crackling open fires, the children chose to design, build and bring to life a playful vehicle to help them deliver presents and bring the community together over the Holiday season.

The film shows children using play to navigate their way and overcome obstacles on their journey to deliver gifts. The overarching campaign narrative highlights that play, not perfection, is the best way to bring people together to have fun throughout the season. This narrative was rooted in cultural insight, with new research from the LEGO Group finding that the vast majority (84%) of children wish they could play more with their parents[1].

But the LEGO Group couldn’t leave the children completely unsupervised, so playful icon and global superstar Katy Perry jumped aboard to help supercharge the Holiday season with play.

Aside from being one of the best-selling musical artists of all time, Katy is an avid LEGO fan and collector. As well as featuring Katy, the advert is backed by her chart-topping hit Firework, a song about self-empowerment, confidence and being your true self. It shows the group of children run outside to be greeted by Katy in an outfit inspired by LEGO bricks and riding on a larger-than-life LEGO vehicle they’ve just created together – with every character, animal, and gadget in the colourful adventure built using the LEGO System in Play.

“At the LEGO Group, children are our role models – they inspire us with their creativity, curiosity and imagination, so who better to turn to for our Holiday campaign,” says Julia Goldin, Chief Product and Marketing Officer at the LEGO Group. “Our new campaign is a celebration of the creative power and optimism that children possess. They see endless possibilities for play and show us the difference play can make to the world as they rebuild it for the better. We want to inspire people of all ages to prioritise play over perfection and unleash a childlike joy this Holiday season.”

When asked about her involvement in the campaign, Katy said: “As a LEGO fan who has built a lot of models with kids in the last few years, it was super heart-warming to see what happens when kids are in put in charge of holiday gift-giving. Play comes in so many forms with no set of rules, and to see them apply that makes me hopeful for a really bright future for the generation.”

Developed by the creative team from the LEGO Agency, the fully integrated global Holiday campaign will run across a variety of channels including TV, digital, out of home, social and e-commerce, and in LEGO stores across 35 markets.

The film was created by a multi-award-winning team, including direction and production by Traktor and post-production by The Mill. It is the first time a celebrity has featured in one of the LEGO Group’s Holiday campaigns, and will be supplemented by further content featuring Katy Perry, including videos of children interviewing her and a look at her building a gift as part of the #BuildToGive initiative.

As part of the Holiday campaign, the LEGO Group has also launched digital and in-store wishlists for children to let their parents know what their perfect gift would be. There will also be an online LEGO Gift Finder so gift givers can easily find the LEGO products that inspire the children in the film.

Running alongside the Holiday campaign is the LEGO Group’s sixth annual #BuildToGive initiative. #BuildtoGive will encourage children and families globally to build a LEGO creation in order to give a LEGO set to a child in need. Once built, simply share on social media or LEGO Life using the hashtag #BuildToGive before the end of December. This year, the company will be giving a record-breaking two million sets to children in hospitals, children’s homes and vulnerable communities. To find out more, visit: LEGO.com/BuildToGive.

The new Holiday and #BuildToGive campaigns are both part of the LEGO Group’s Rebuild the World brand platform which celebrates the creativity of children, inspires them to imagine a better world and shows how LEGO play helps them develop vital life-long skills. To find out more, visit: LEGO.com/holiday-gifts.