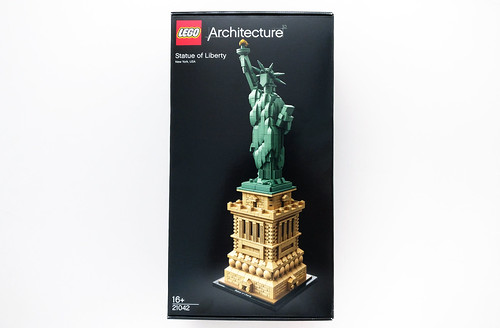 The Statue of Liberty is one of the most famous landmarks in the world and LEGO has released several iterations of the structure throughout the years and the latest one is the summer 2018 LEGO Architecture 21042 set. It has 1,685 pieces and retails for $119.99 and will be available starting on June 1.

As with other LEGO Architecture sets, the box is higher quality than with other sets and it opens up using flaps. The box is also larger and bulkier than other Architecture sets. The front is pretty standard showing off the set while the back shows the proportions of it along with a side-to-side comparison to its real-life counterpart. 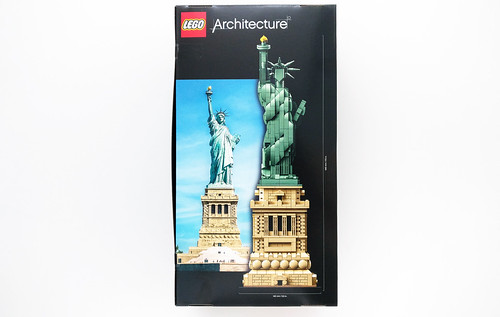 The contents of the box include ten numbered bags from 1-5 and a 184 page instruction booklet. I like this method of part organization as I don’t have to go searching for the parts when the bags are unnumbered. 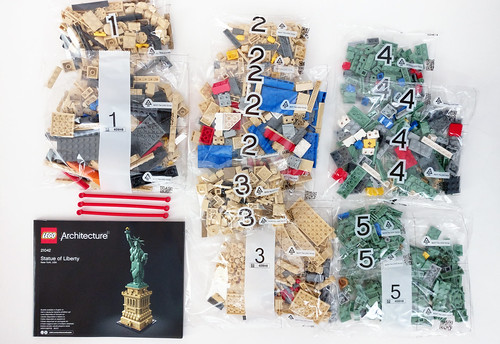 Like with other Architecture sets, the booklet has some background information about the Statue of Liberty as well as some facts of the monument.

The first three sets of bags are used to build the granite pedestal. The base of it uses some masonry bricks which are surrounded black tiles, one of which with printed Statue of Liberty wording in the front.

Further up a little, there are six 2×2 round slide shoe pieces used for each side of the building however there are supposed to be ten on each side. I’m sure that LEGO did this to reduce the scale of the set just a little bit. 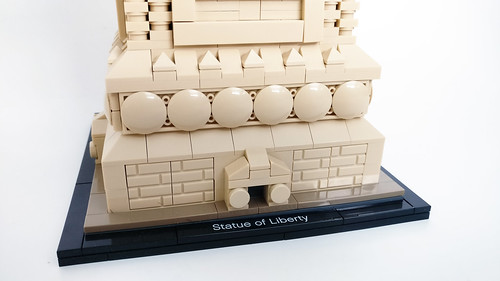 Above that are four short columns on the corners that uses some of the new 1×1 pyramid tiles. The parts are also used around the perimeter as well. Up to this point, it’s been a pretty redundant building process since all four sides have been the same.

Further up, we’re now at the center part of the pedestal and we also start the second set of bags. The corners uses some corner plates along with some 1×1 round plates that are alternated with some 1×1 square plates. If you have OCD, this part of the build gets a bit repetitive to put on lined up straight.

The middle columns, again, are the same on all four sides and they use some headlight bricks along with some 1×2 grills to achieve the look. The corners, like before, use the same 1×1 round and square plates with the corner plates. 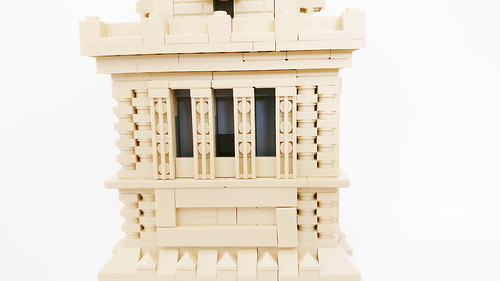 The top part of the pedestal where the viewing area is at is straight-forward with the 1×1 bricks along with the wall elements. 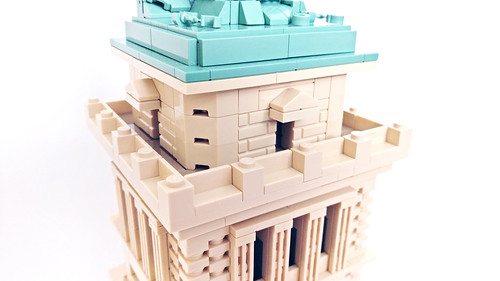 In the middle of the pedestal are a few red Technic rods to hold the whole statue together. The bottom two rods are connected to a Technic beam at the base of the pedestal. 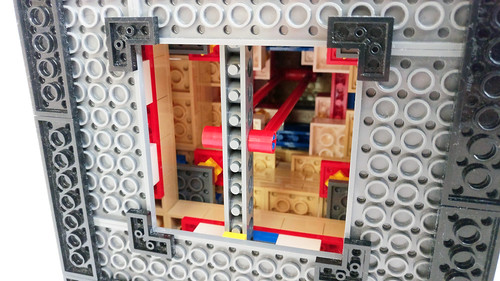 Now that the tan bricks are done, the last two sets of bags are mostly for the sand green parts which fans will surely enjoy. First you build the middle column that everything builds out from. It mainly uses some 1×1 bricks on two sides and headlight bricks that builds up on the exposed Technic rod. 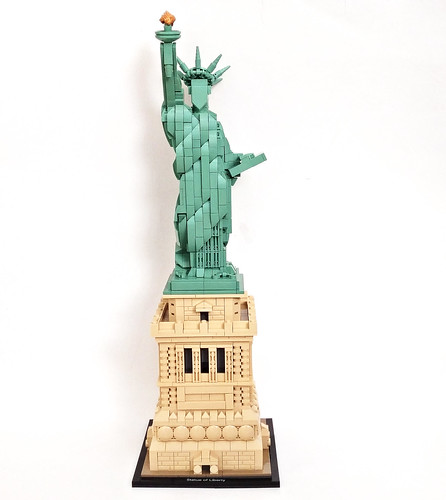 The dress consists of a lot of sloped pieces as well as bow plates, most of which are new in the sand green color. These parts are used nicely to show the folds of the dress. I will say that I found myself putting the wrong piece on a few times due to me going too fast and putting on the wrong bow plates. 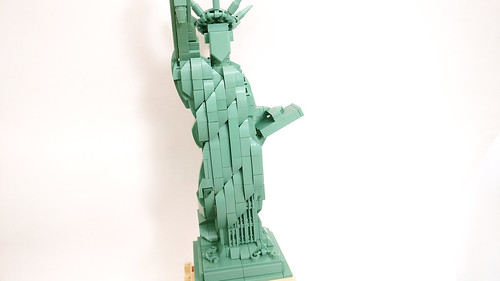 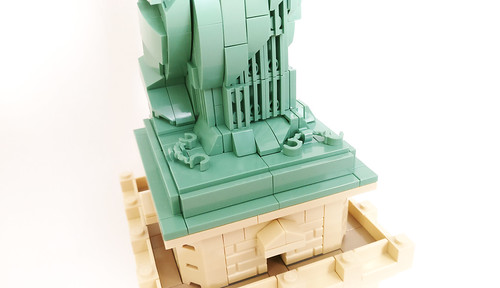 The crown is very recognizable however the face only uses a shield piece, all of which are brand new pieces in sand green. The back of the head, however, looks a bit ugly. One other notable thing is the torch where a gold hairpiece is used to represent the flame. Finally, the tabula ansata that she holds is attached on a hinge brick so it can be at a slight angle. 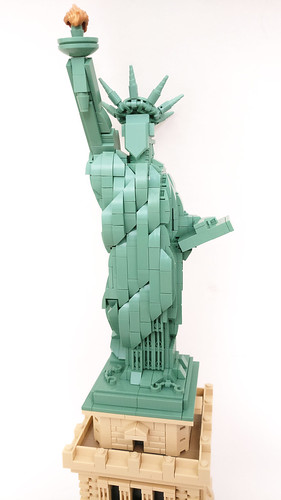 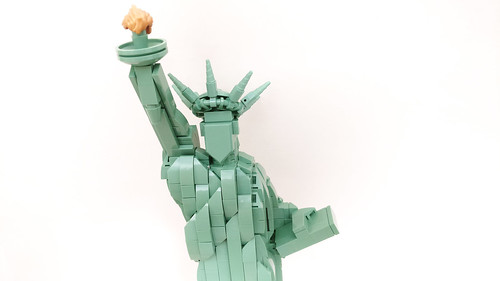 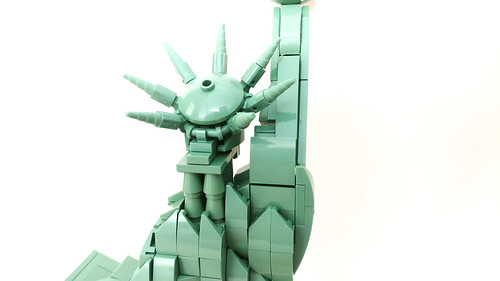 The Statue of Liberty (21042) is the the largest LEGO Architecture set that I’ve built and it’s probably one of best ones I’ve built as well. The model is very accurate to its real-life counterpart and it’s also a great set to sit down and put together. There are a lot of new pieces in sand green that builders will want to pick over for their own purposes. The only downside is probably the higher price but it’s still well under the golden ratio of $0.10/piece, especially with what you get. I highly recommend this set as it makes a great display piece as long as you have space for it. 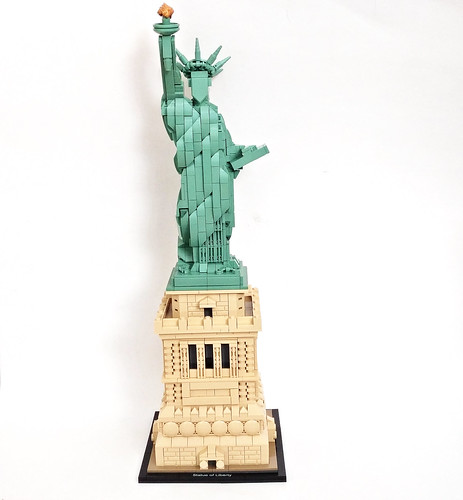