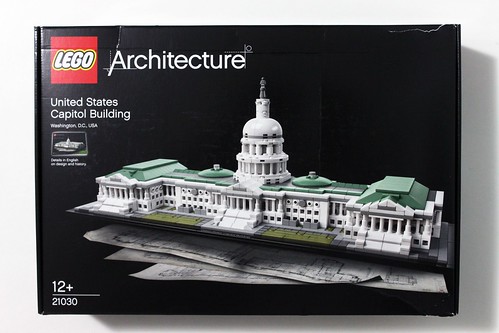 LEGO has recently released a couple of new LEGO Architecture sets and the first one I’ll be reviewing is the United States Capitol Building (21030). It is the larger of the two summer wave sets coming in at 1032 pieces and retailing for $99.99. It is currently the third largest landmark Architecture set that LEGO has produced. The contents of the box include 9 un-numbered bags, six loose 8×16 plates, and a very thick instruction booklet. 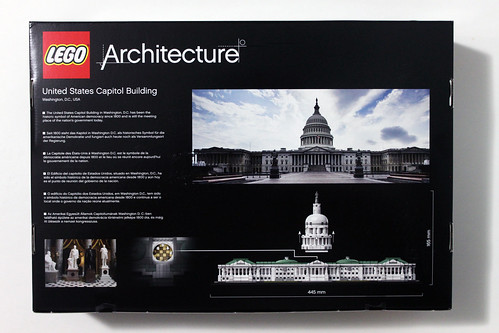 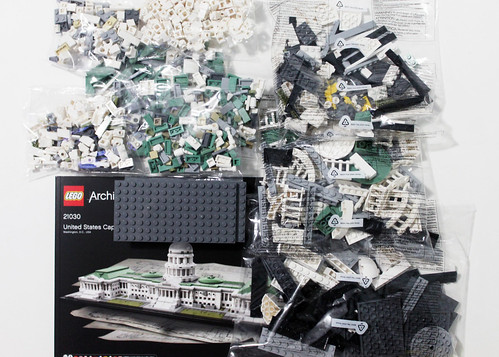 The front of the instruction booklet gives you some background on the US Capitol including the history of the building and some facts. Also throughout the pages, there are random facts on the upper-right corner of some pages.

Since the bags are not numbered, you’ll have to resort to the good ol’ fashioned dump all the pieces in a pile. I highly recommend separating the larger pieces from the smaller pieces. From the beginning steps to around step 33, you build up the base for the set. If you’re a perfectionist or have OCD like me, you’ll have a fun time trying to line up all the 1×1 tile pieces. Because I wanted everything to be pretty straight, that added some more minutes to the build time. 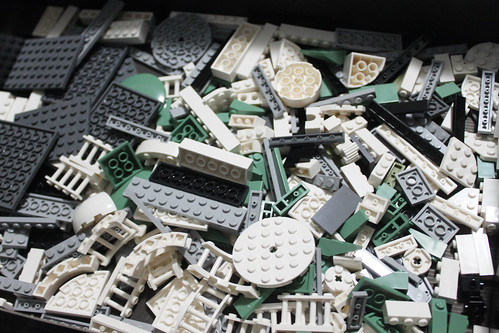 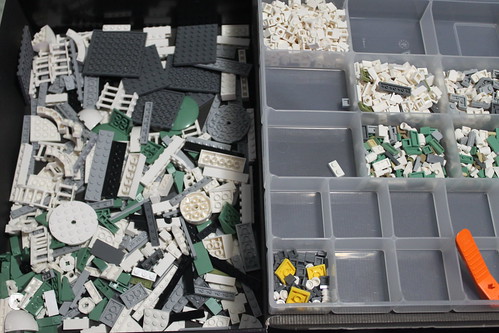 Next up, you’ll be starting the walls for the US Capitol Building. You’ll find that there are a lot of 1×1 angular bricks to give an illusion of the windows and openings for the building. There are also some 1×2 sloped pieces in the front to represent the steps that lead up to the various entrances. 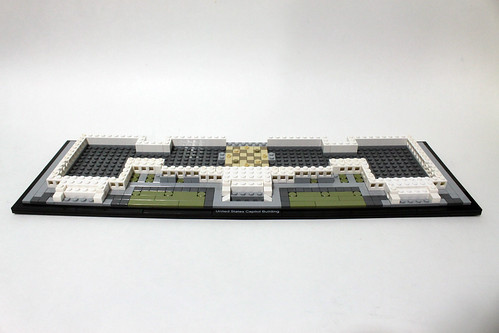 One thing I really like about the interior is the detail for the rotunda for the US Capitol Building. There are eight statues which represent only a fraction of the 100 total statues that are in the National Statuary Hall Collection. 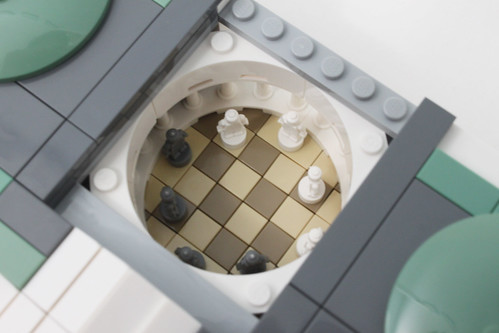 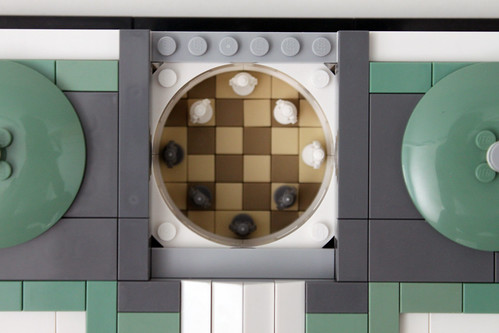 Further along the build, there are more 1×1 angular bricks to create the wall. When I mean more, I mean a lot more because this will get very repetitive as you’ll be using at least 100 of them in less than ten steps. Between some of those steps, you also have some 1x4x2 fences for the sides of the Capitol. 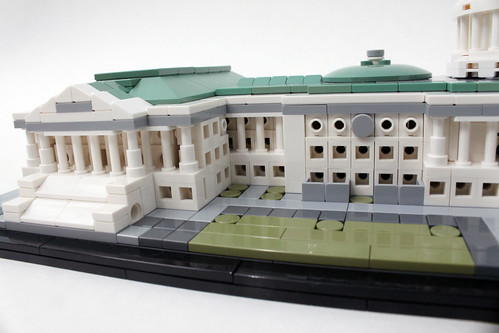 At the main entrance, there’s some arch pieces for the door while being surrounded with more fence pieces to show off the column architecture. There’s also some fences for the House of Representatives and Senate entrances as well. 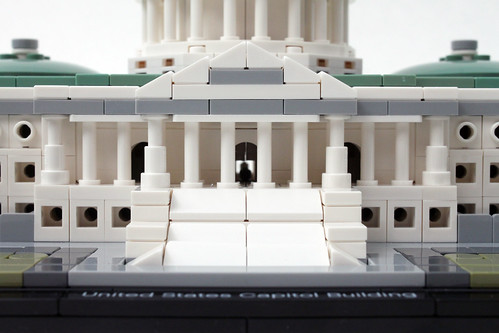 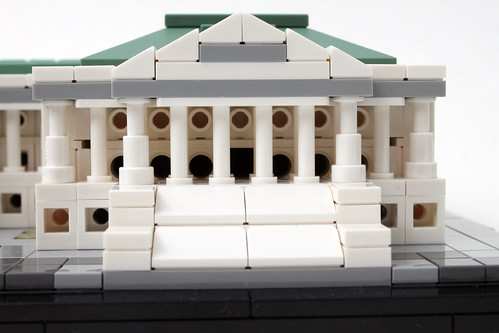 After those steps, you start building the roof of the Capitol which includes lots of white tiles for the outer rim of the room. There are also 1×1 chesse slope pieces and 1×2 slope pieces for the roof area of the three front entrances. For the majority of the building roof, you have a lot of sand green tiles and cheece slopes for the center of the building. You also have two sand green 6×6 dish pieces which are exclusive to this set. 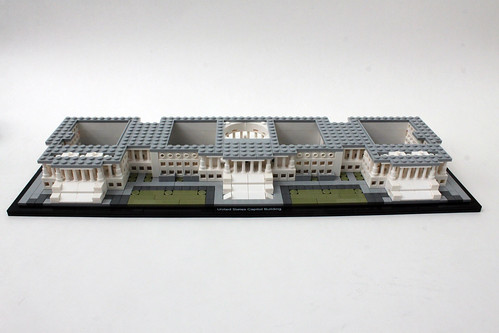 Next up are the two roofs for the House of Representatives and Senate sides of the building that are on plates so they can easily be removed to see inside which unfortunately, is not much. 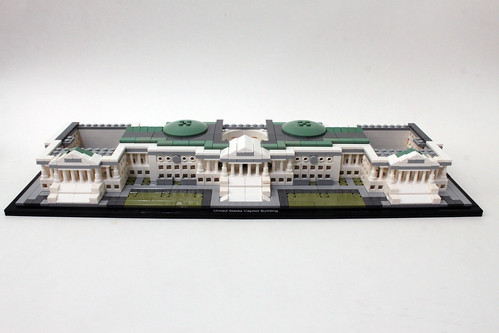 Finally, you have the iconic dome for the United States Capitol. There’s not too much to this part except for stacking bricks and plates. There are some Travis bricks in the center to connect the slope pieces around the perimeter. Surrounding that are some curved fence pieces which are also exclusive to this set. After that is just more stacking of pieces with the arch bricks on the top and another dark gray mini statue piece to represent the Statue of Freedom. 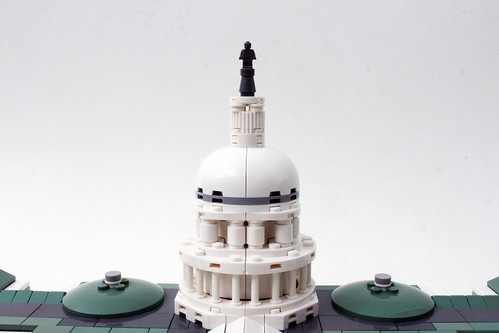 Overall, the LEGO Architecture United States Capitol Building (21030) is a decent representation of the real-life building. The use of the 1×1 angular bricks on the outer edges is pulled off pretty well and it gives the illusion of the numerous windows the building has.

The sand green pieces on the roof is a very nice touch as it does match up with the colors on the Capitol. The only complaint I have with it is that I have quite a few pieces that are discolored. I’m not exactly sure what happened during production but notice there are various shades of sand green. I’m not sure if others have the same issue or not but do let us know in the comments. 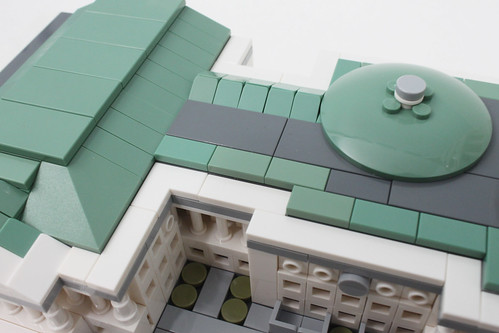 Finally, I do like how some parts of the roof can be removed to see the inside of the Capitol Building like the rotunda and the two chambers of Congress. There is detailing with the National Statuary Hall Collection but the interior of the sides for the House of Representatives and Senate are completely bare. 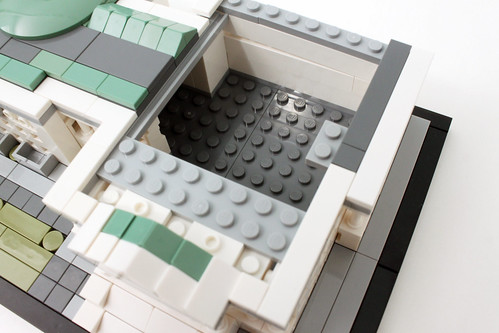 If you’re a fan of the LEGO Architecture series, the United States Capitol Building is a fairly good addition. There are some exclusive pieces in the set that could be useful for MOCs. The building experience wasn’t too challenging as the building techiques are simple but very repetitive in some places. Also if you have OCD, the steps that use the 1×1 tiles and cheese slopes may cause anxiety as you try to get them straight.

As I mentioned before, the set currently retails for $99.99 for 1,032 pieces which isn’t too bad but you can do better if there’s a sale on it or if you can get it at a discount. 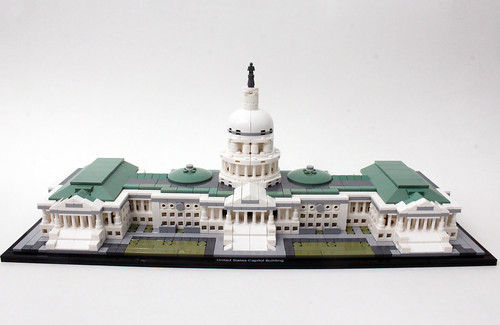