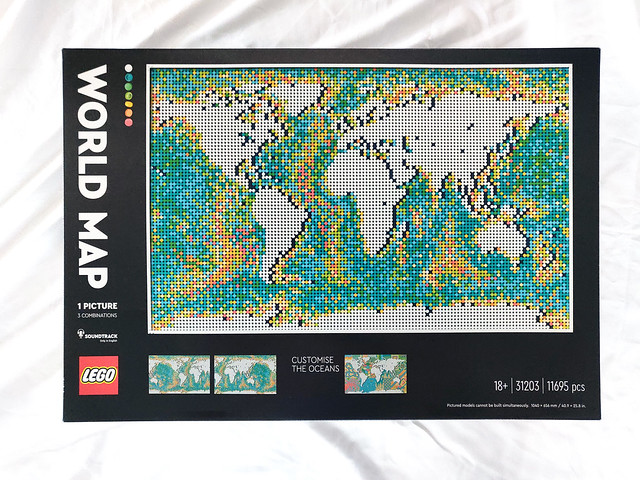 Releasing on June 1 is the new LEGO Art World Map (31203) which consists the most parts in a LEGO set with 11,695 pieces and it will retail for $249.99. The map is inspired by bathymetric mapping of the ocean floor which may not be so eye pleasing to some but we’ll see if it matters that much. 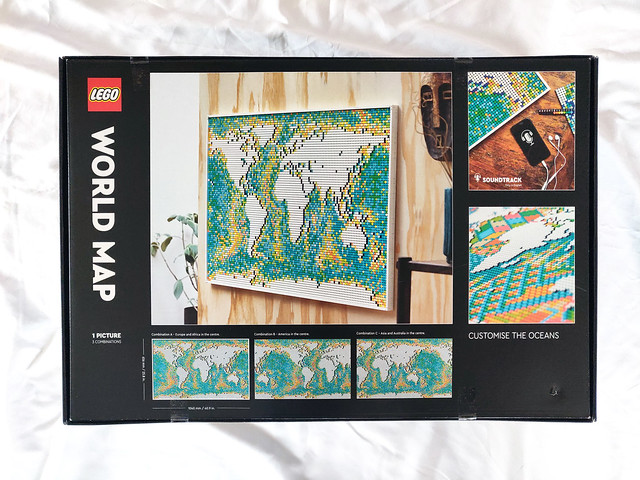 Build I get to the building experience, I want to talk about the box that and what all is included. The main box is extremely big and it weighs a good amount. There are actually two boxes inside the main box and they are flanked by bags of different colored 1×1 round plates. The top box includes the instruction booklet along with parts for the framing of the map. 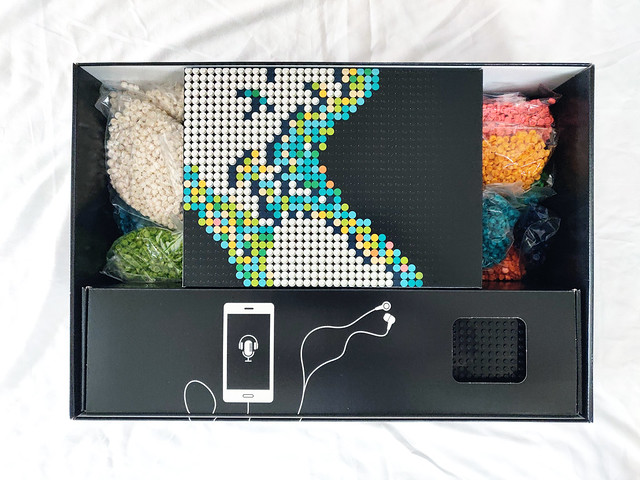 The lower box is filled with 40 16×16 black plates which were designed originally for the LEGO Art sets but has since appeared in the LEGO Colosseum (10276). The baseplates allow you to connect the panels together by using Technic pins and plates on the back side. It works well with standard LEGO Art sets but there are some issues with a larger panels which I’ll get to later. 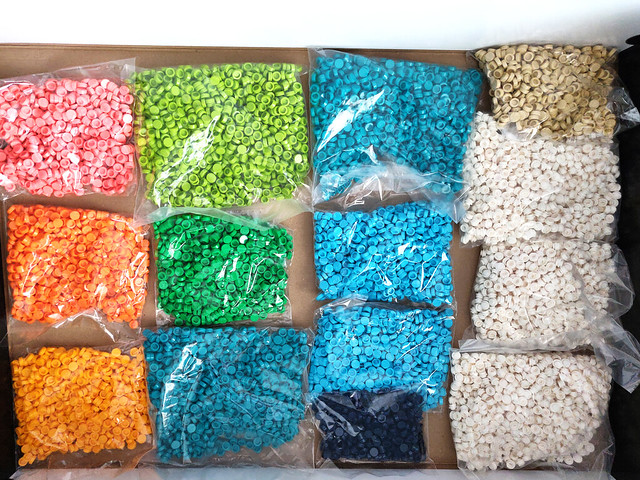 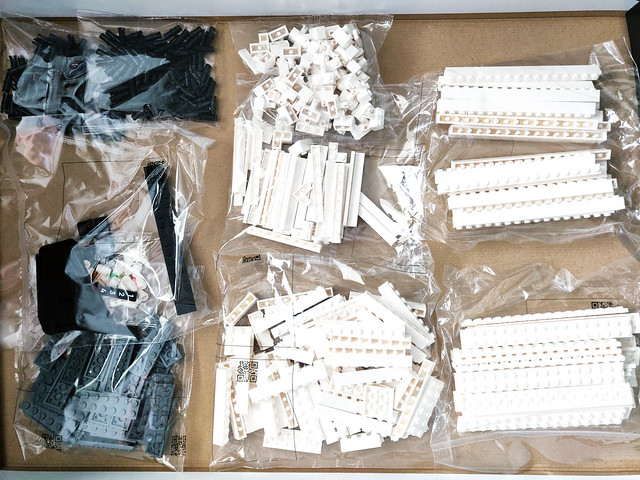 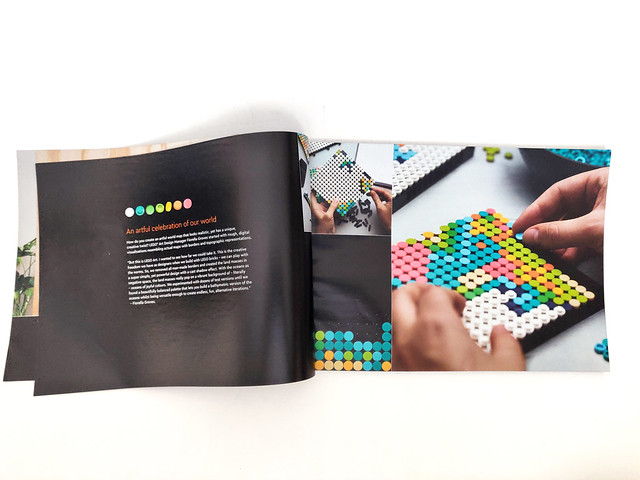 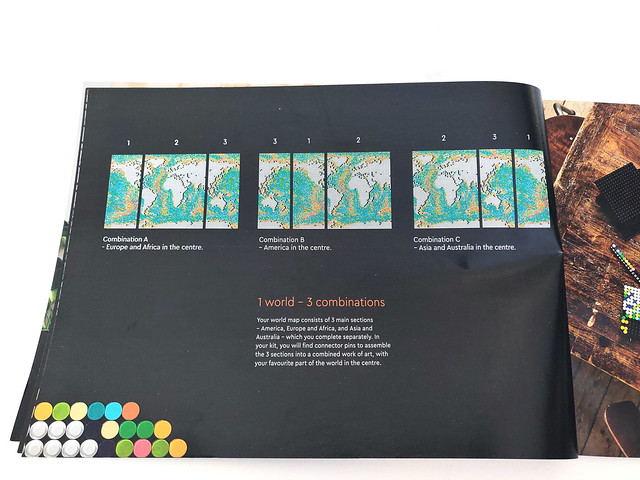 Like with the other LEGO Art sets, there is a soundtrack that you can listen to while building. There are travel stories by Syazwani Baumgartner, Torbjørn C. Pedersen, Dane & Stacey, Ernest White II, and Fiorella Groves.

The instructions for the build goes by a color by numbers look where they tell you where to put the pieces by color in an easy to follow way. The blues and the greens are distinct but these have been instances where I accidentally mixed up the colors a few times, mostly in the ocean areas. 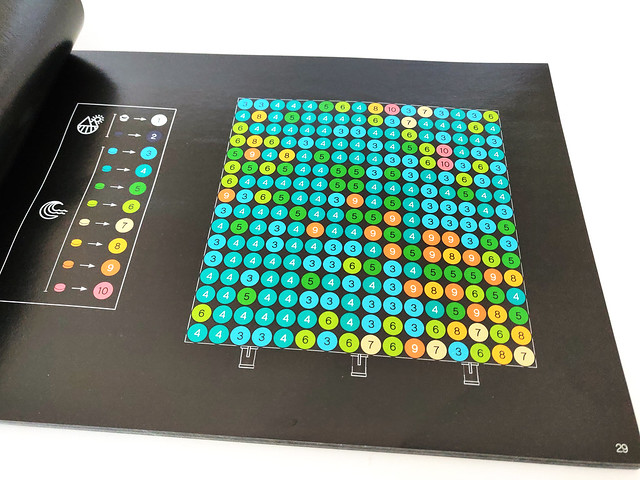 Finally in the back, the parts list is hilariously small for the number of pieces in the set. 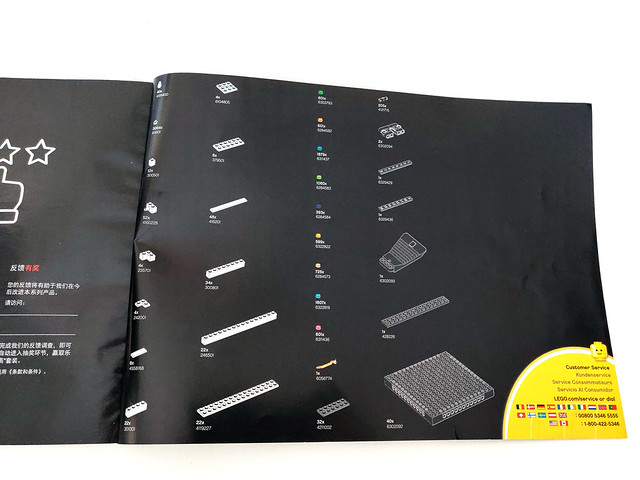 You may have your own way of building but I find that using small bins for each color of the 1×1 tiles and plates to be most efficient. There are over 11,000 pieces so it took me a good few days to complete. Each baseplate took me about 10-15 minutes to make one, depending on how complex each one was. Each baseplate uses Technic pins on the bottoms and sides to connect to each other. 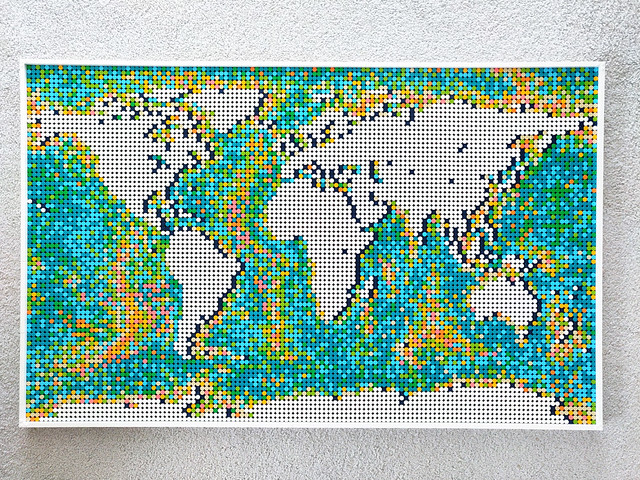 For the land areas, it was pretty easy since they use the 1×1 round plates so that brought the average time down a little. You’ll have your own strategy on how fast you can do one baseplate once you get a feel of it. One thing that is somewhat disappointing here is that it is all white with no detailing. The vibrant colored tiles create a bathymetric map which shows the topography of the ocean bottoms but there are places where it’s just too bright. 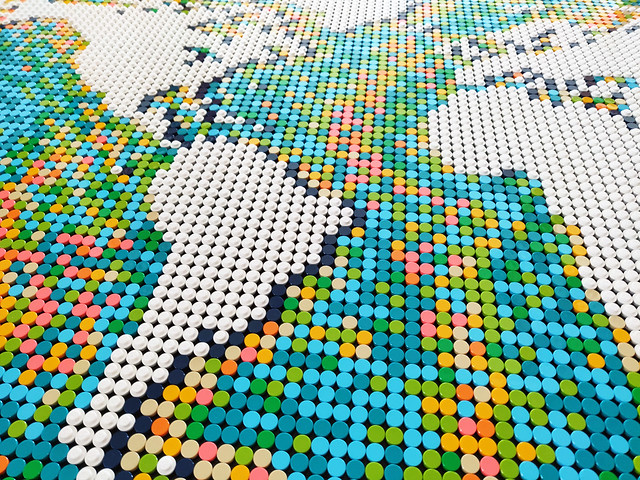 Adding the frame at the end took about 15-20 minutes since and you also have to maneuver it around to put on the plates on back as well. Here is where my main issue about the set is at. The 2×6 plates used for the back to support the baseplates don’t work that well as they tend to pop off at various locations when you move the map around. 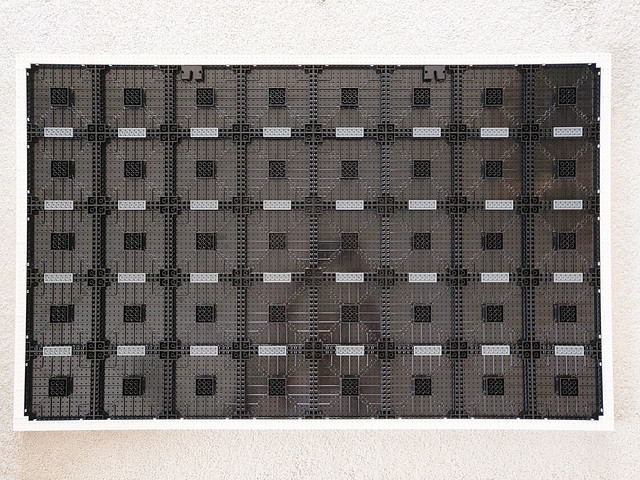 Surprisingly, there are none used vertically for where the three sections are connected at. I’m not sure why LEGO decided not to use plates on those areas. Six extra plates would’ve made it easier for the map not to flex when moving it. 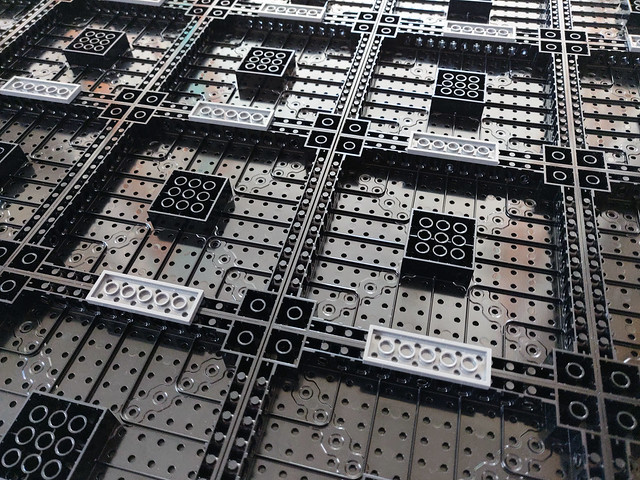 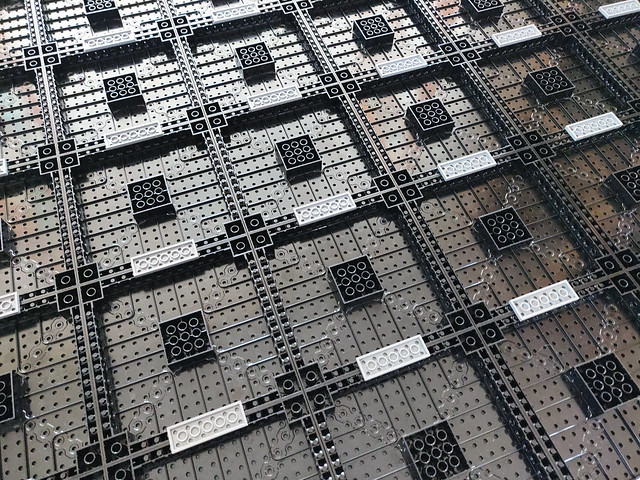 There are also some hangers at the top that you can use to hang it on the wall using screws. Unless you’ve made it very secure, I would suggest not doing it until you do. That would be a lot of pieces to put back on if there’s an accident. 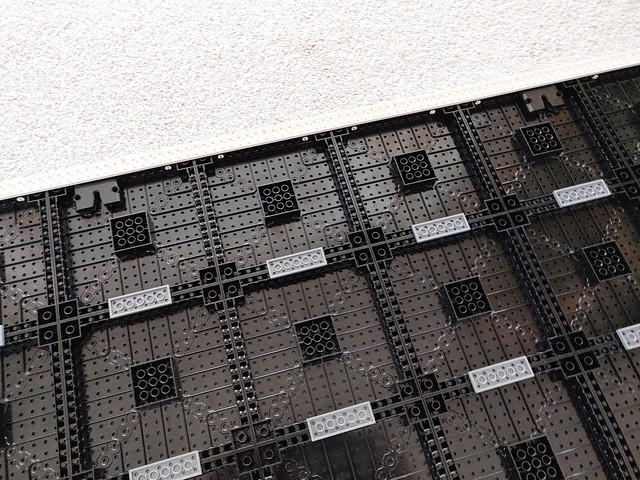 Lastly, there are some additional parts along with letters and numbers to mark where you’ve been or locations where you want to visit in the future. The white cones do kind of get lost since all the lands are white as well. The marker tiles don’t really help that much especially if you’re marking near a coastal area. As you can see, I’m in San Diego and the marker on the left is hard to see unless you’re at an angle. 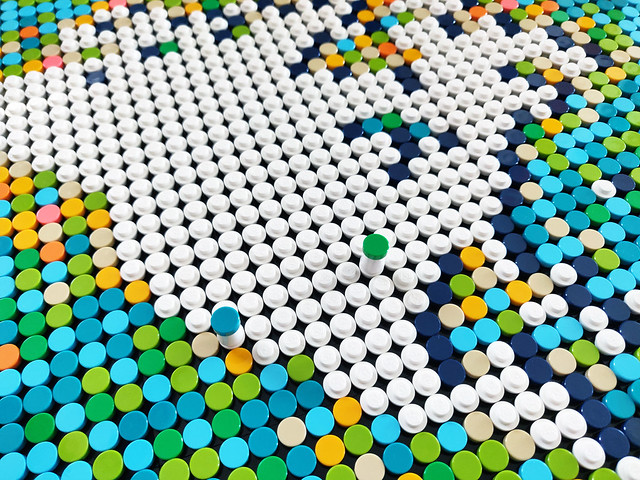 There’s also a plate with some number tiles for you to use as a guide for the various colored pieces. I personally didn’t use it but it may be of some help to others. Lastly, there’s the large brick separator that you can use to scrape off the tiles if you want to dismantle it. 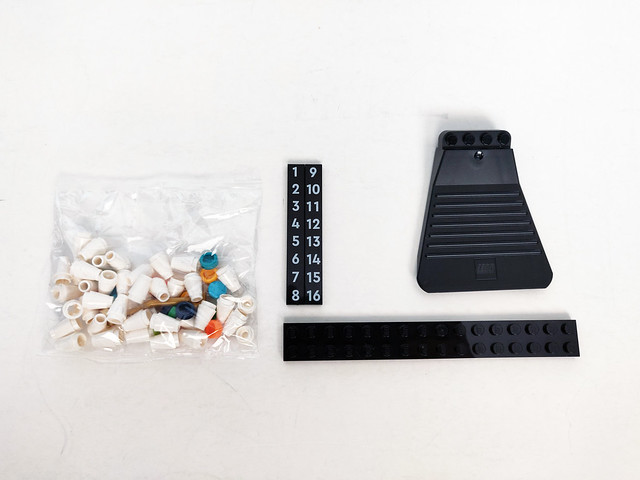 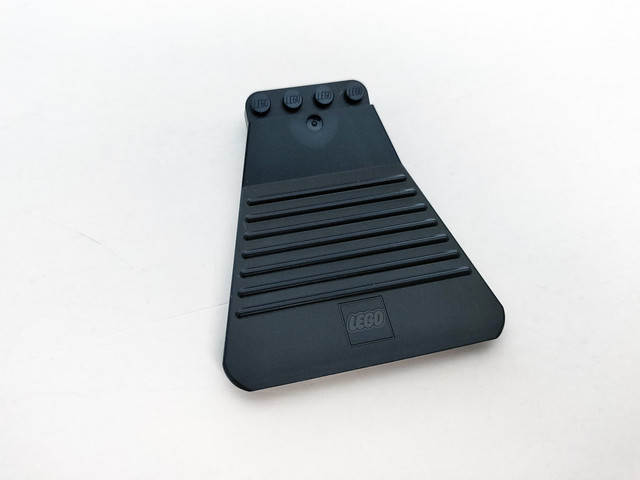 I think it took my about 20 hours split between three days to finish everything. I didn’t really rush in building it and was usually watching TV at the same time. There is also the soundtrack that you can listen to but it wasn’t available at the time I was building it.

Overall, the new LEGO Art World Map (31203) is a mixed bag for me. I do like the concept of building a map out of tiles but the color scheme is a little too vibrant. I would have preferred a more traditional map with more greener hues for the land masses instead of just plain white. However, that doesn’t mean that you can’t use your own pieces to do that. I do like the bathymetric colors for the ocean but more details on the land masses would’ve been perfect. 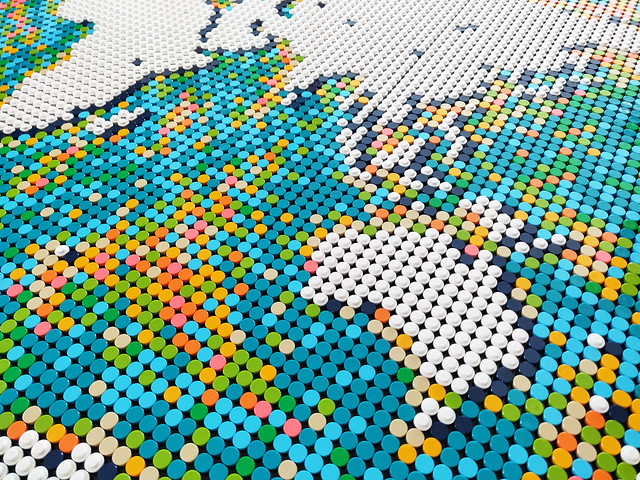 Also when the map is fully completed with the frame, I feel that it’s still a bit flimsy. The 2×6 plates don’t really help that much and I’ve had times where random ones would just pop off while I was moving the map around. If you are able to secure it enough, it does look pretty good when looking from far away and people probably won’t know that it’s made out of LEGO. 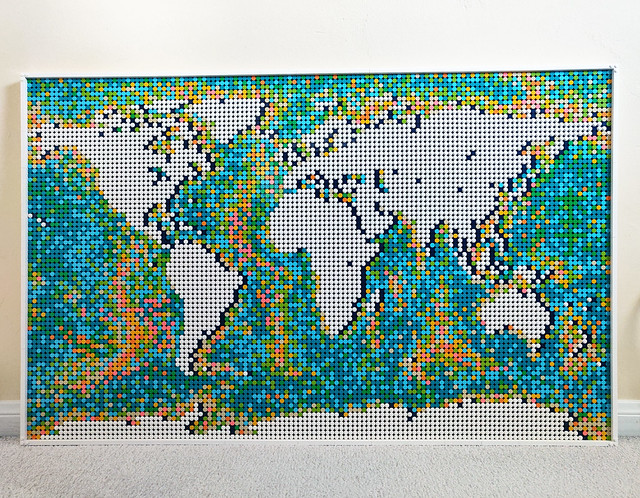 I do like that you can customize the panels to the different positions but I think the more traditional look is what most people will be using as the final product. One other good thing is the amount of pieces you get compared to the price of the set. With the set being $249.99, the price/piece ratio goes down to only $0.02 which is great if you’re looking for a ton of colored tiles and white 1×1 round plates.