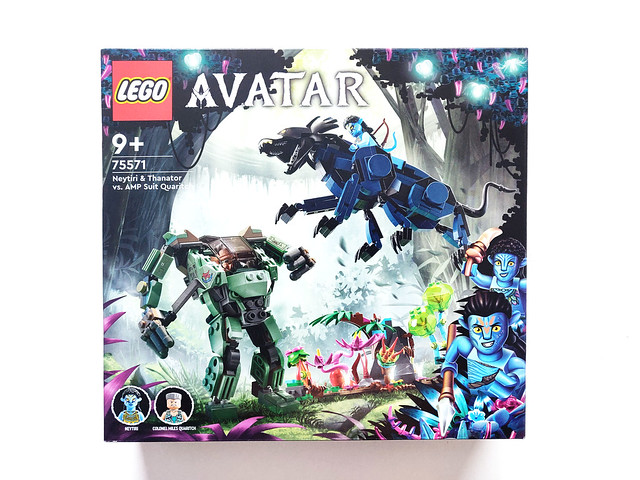 Starting in October, LEGO will be releasing the new LEGO Avatar sets and the first one we’ll be checking out is Neytiri & Thanator vs. AMP Suit Quaritch (75571). The set has 560 pieces and retails for $44.99. Even though it’s a medium sized set, it is the smallest system set for this wave, not including the BrickHeadz set. 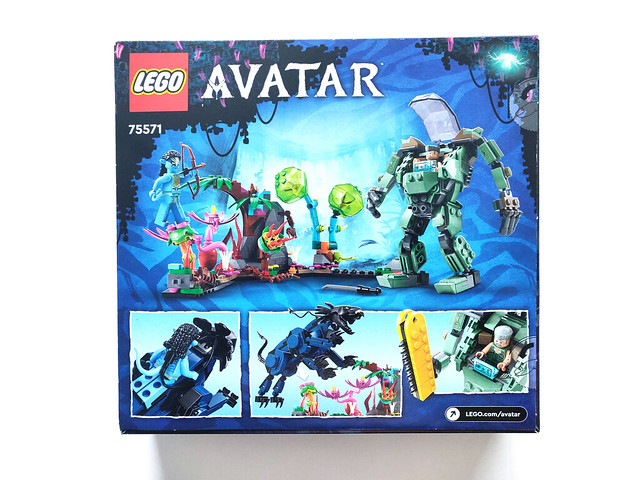 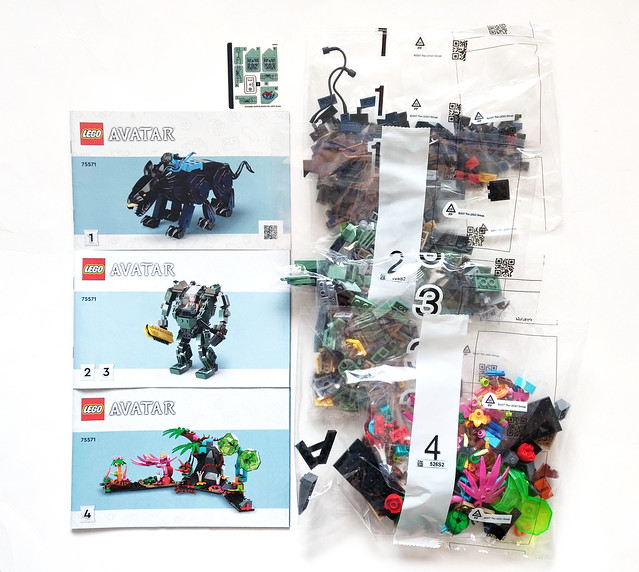 The set comes with minifigures of Neytiri and Colonel Miles Quaritch. Neytiri’s torso has printing of some light armor that she has on during the scene. The most notable thing for her are the return of the longer legs which has printing of a loincloth. Her face has printing of the Na’vi facepaint. The end of the hairpiece and a spot to connect with the thanator. She has a bow as her accessory. 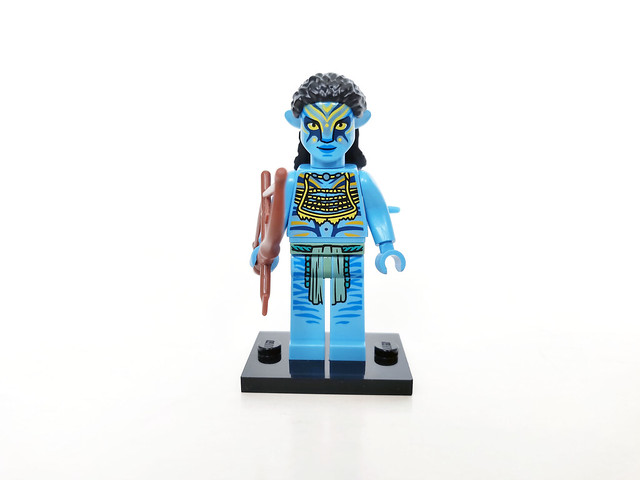 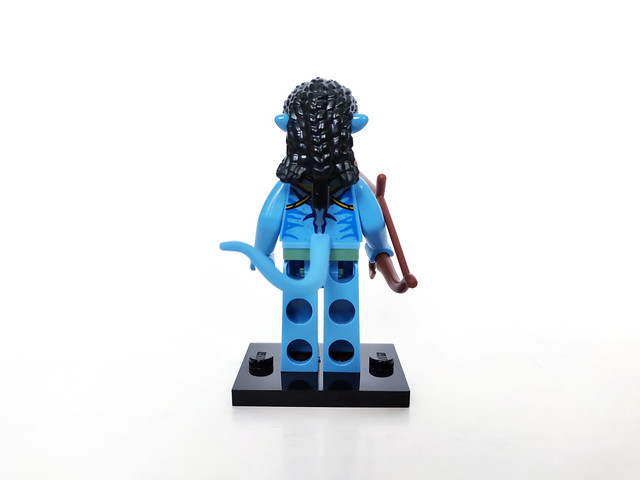 Quaritch has on an olive green outfit with a turquoise undershirt. The pixel printing on the torso and legs is similar to the one shown in the movie. He has an angry expression and there is some scarring on the face which is faithful to the movie as well. 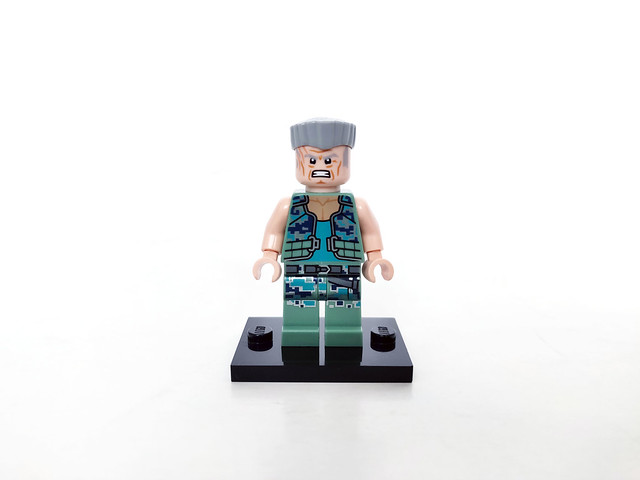 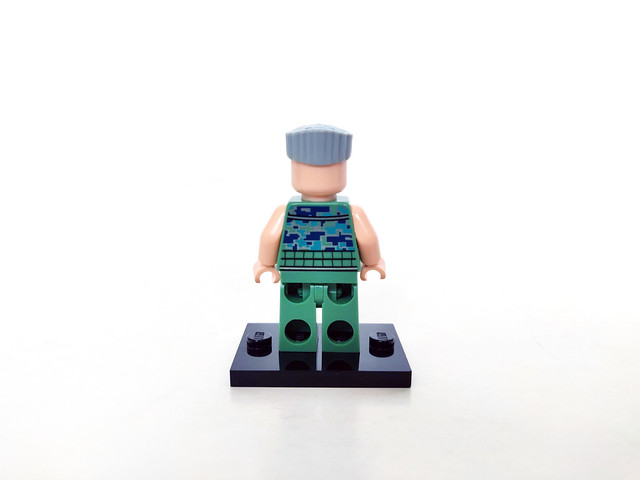 One thing you’ll notice on these LEGO Avatar sets is that there is a section of the colorful rainforest. For this particular one, it has three sections that are put into one. The leaves and branches are extremely colorful and some of the white flowers even glow in the dark. 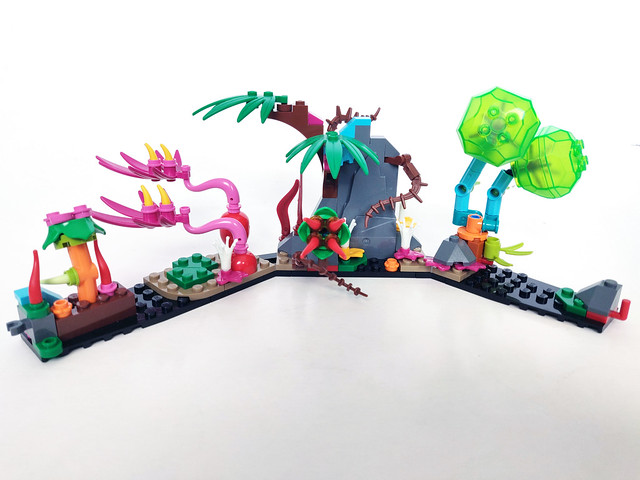 The thanator has a dark blue and black color scheme. It has six legs, four in the front and two hind ones. I will say that the two front legs are fragile as they tend to pop off since they aren’t secured to anything. The head is specially molded for the beast and there are some pieces used for tsaheylu with Neytiri. Getting her connected while laying her down is a little troublesome as things kept getting popped out whether it be the minifigure on the studs or the rubber piece to the back of the heads. 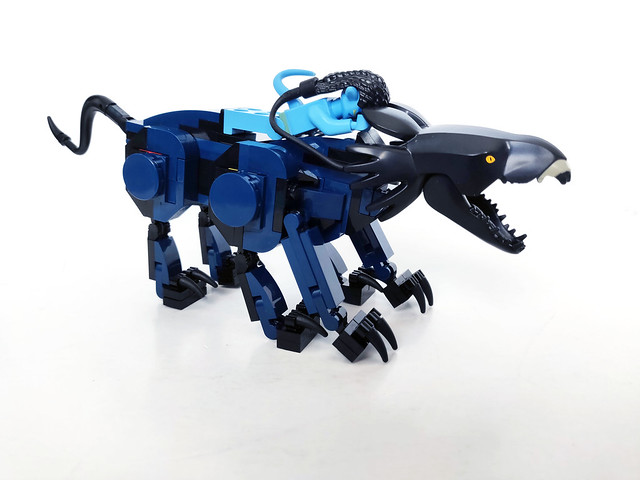 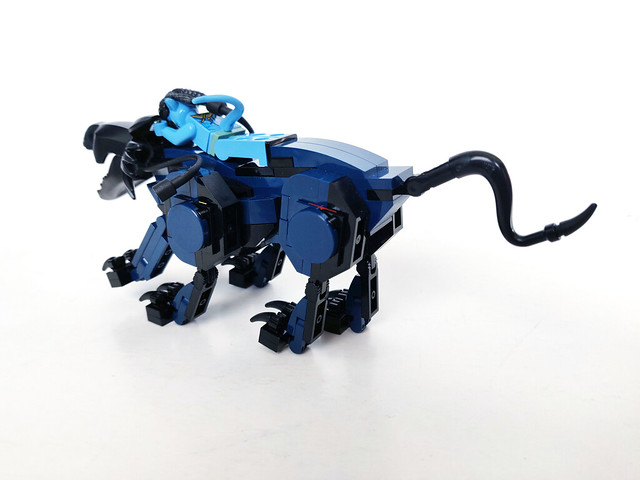 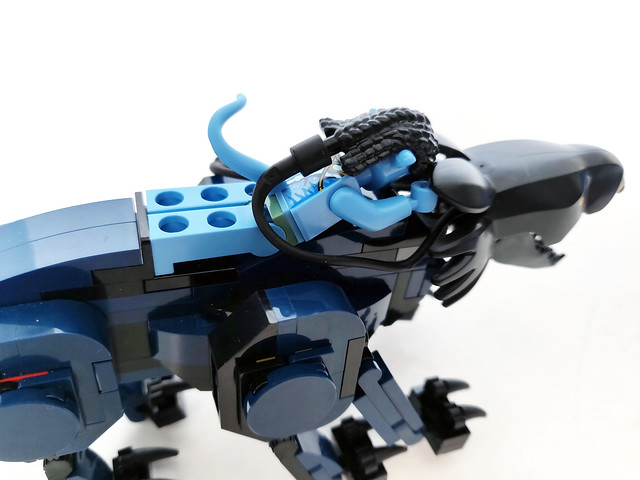 Finally we have the Quaritch’s AMP Suit which looks decent. There’s lots of use of ball joint to articulate the mech but there is no knee movement. 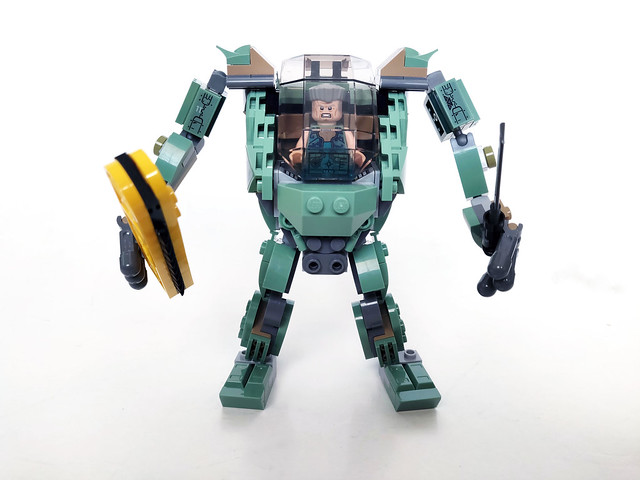 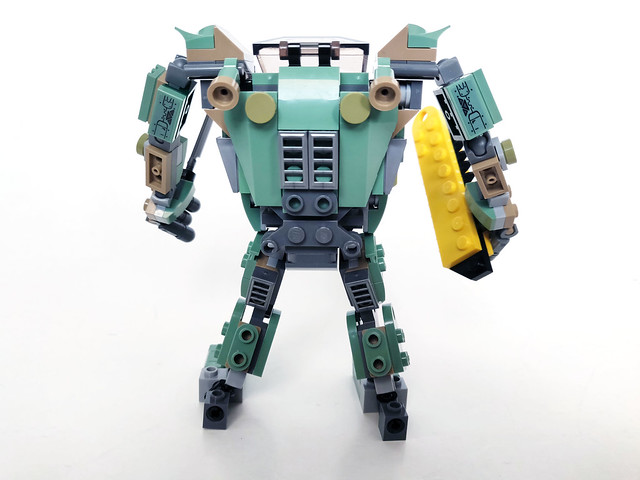 The cockpit allows Quaritch to stand inside it. The controls and the HUD are stickers as well as the sides of the mech and parts of the arms. 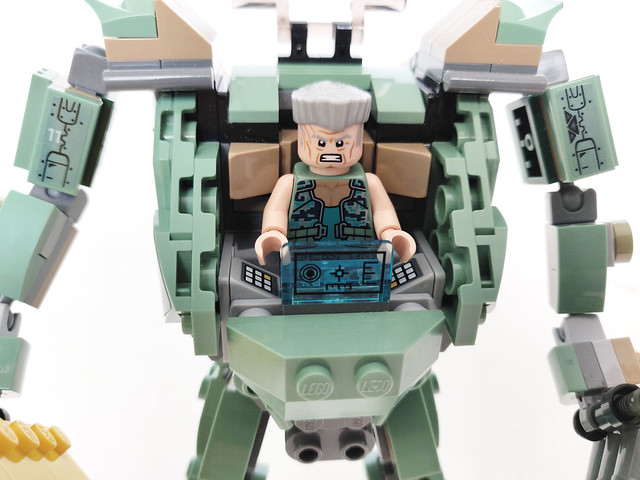 One thing that strays from the movie is one of the weapon accessories that the mech has. It has a large knife which was used to kill the thanator but the other weapon here is a yellow saw. In the movie, the AMP Suit had a GAU-90 machine gun which had a saw blade in the front but the set here has just a long sawblade. Obviously, LEGO wanted a kid friendly set and not include a high powered weapon but it just looks bad especially with the yellow. If was gray or black, maybe it wouldn’t be so bad. 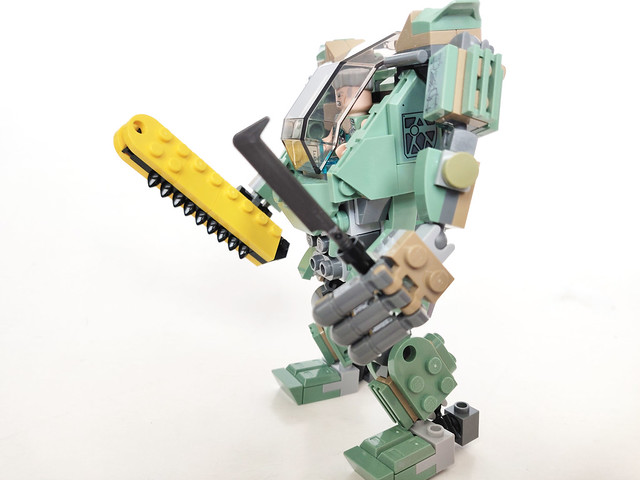 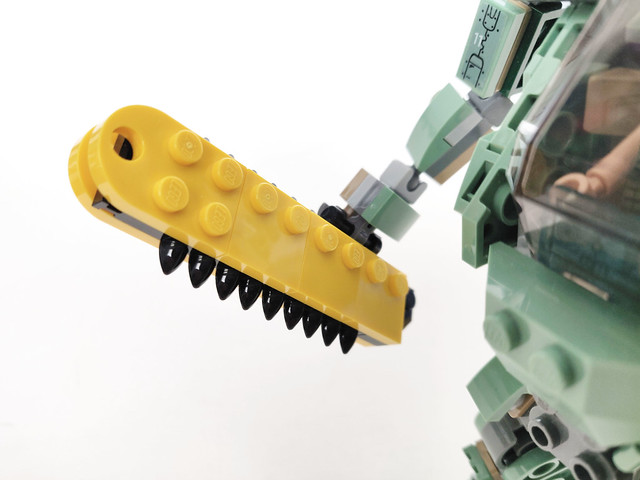 Overall, the LEGO Avatar Neytiri & Thanator vs. AMP Suit Quaritch (75571) isn’t a bad looking set. You get some of the key players in the particular scene as well as part of the forest which you can use to create a larger one of you have all the sets. The Quaritch minifigure is a great looking one if you’re wanting to build an army since it does have military color printing. Some downsides of the set include the saw weapon for the AMP Suit and the tsaheylu connection. They aren’t dealbreakers but just something annoying that I noticed. 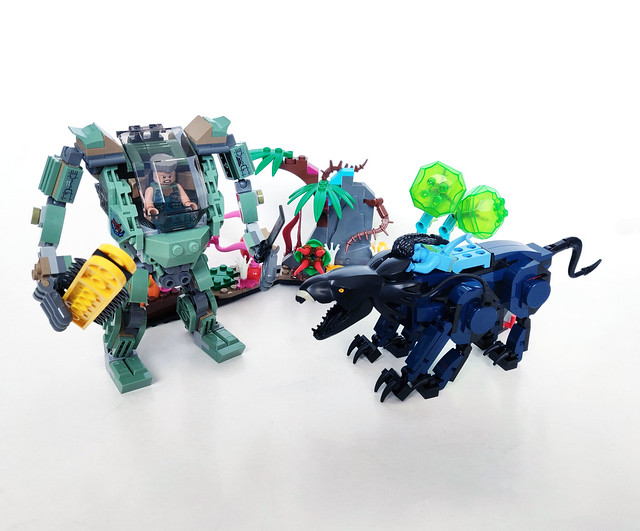