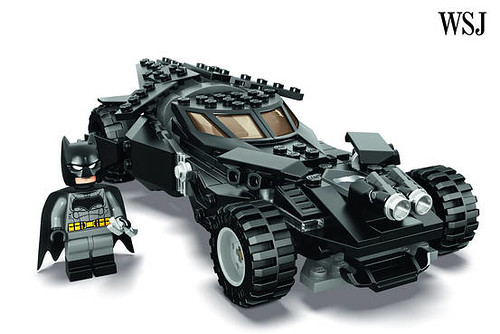 One of the anticipated movies that will be shown off at San Diego Comic Con 2015 will be Batman v Superman: Dawn of Justice and today The Wall Street Journal has revealed one of the LEGO DC Comics Super Heroes sets that will be released in conjunction with the movie next year, the Batmobile. The set will have 306 pieces and retail for $29.99. It also includes a new Batman minifigure as well as two un-named characters while the Batmobile itself will contain some stud shooters. There will also be another vehicle with the set. So for $30, you get a Batmobile, another vehicle, and three minifigures including a new Batman outfit. Sounds like a pretty good deal to me!

The article also states that the Batmobile will be available on January 1st so we can probably expect it by late December. The set will be on display next week at SDCC and I’ll have some close-up shots of it when it revealed to the public. Thanks to everyone who wrote in about it.