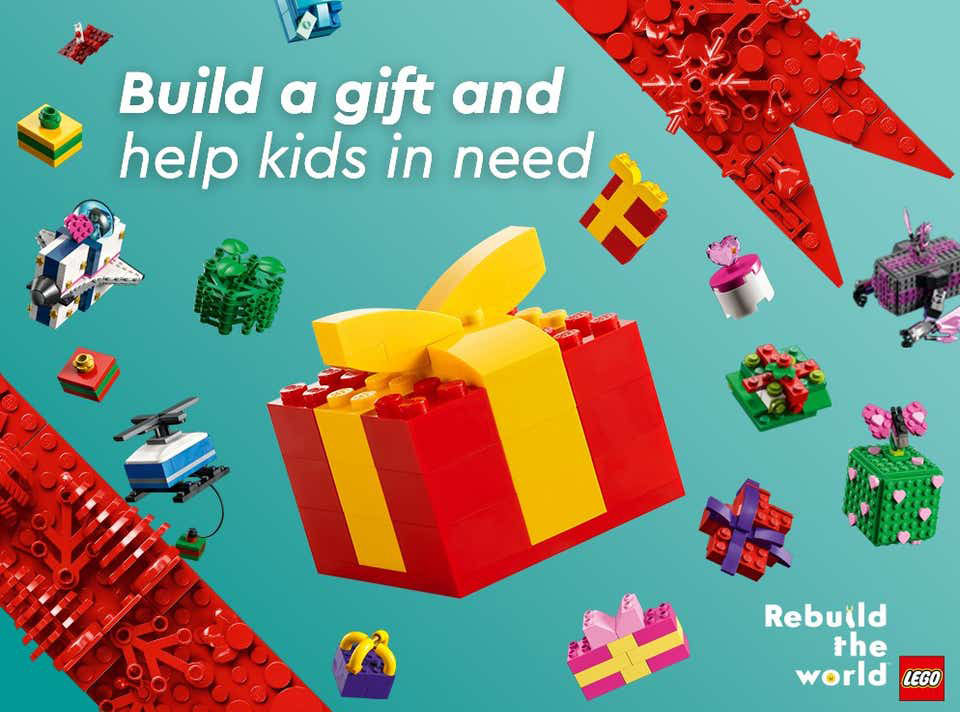 LEGO has announced that the annual #BuildToGive campaign is returning for their sixth consecutive year to donate LEGO sets to children in hospitals, children’s homes, or vulnerable communities globally. Like with previous years, all you have to do is to create something to post online while using the hashtag #BuildToGive before the end of the year and LEGO will donate up to two million sets worldwide.

Billund, November 4, 2022: The Holiday season is one that many families cherish, but for others it can be a challenging time. With this year’s #BuildToGive initiative, the LEGO Group is encouraging families to use their creativity to build a gift from LEGO® bricks, which will be turned into a gift for another child somewhere else in the world. #BuildToGive will help pass on the joy of play to those most in need.

Now in its sixth consecutive year, the #BuildToGive campaign will encourage families globally to build a gift using LEGO bricks and share it on social media or on LEGO Life using the hashtag #BuildToGive.

For every Holiday creation shared before 31 December, the LEGO Group will donate a LEGO set to a child in need of play, giving up to two million children in hospitals, children’s homes or vulnerable communities globally the chance to play this Holiday season.

Getting involved is easy and every gift counts – big or small, round or square, colourful or monochrome! Our LEGO Play Well study found that play helps families bond and makes them happier, so what better reason to get the family together and give the gift of joy to others*.

More than 4.5 million LEGO sets have been donated through the LEGO Group’s #BuildToGive initiative since it began in 2016, with this year seeing the Company set to make its biggest donation yet of 2 million sets.

9 out of 10 parents** globally believe play can help children develop essential life-skills such as creativity, communication and confidence – qualities that can be essential for their future success and wellbeing – and #BuildToGive is just one of the ways the brand looks to help support children around the world through offering opportunities to play and learn.

“For many families, the Holidays are a time of celebration, where they can be together and enjoy playing. But, for some, it can be a tough time,” said Diana Ringe Krogh, Vice President of Social Responsibility at the LEGO Group. “That’s why #BuildToGive is so important. Over the past five years, we’ve been overwhelmed by the response to the initiative and want to say thank you to the families around the world who have taken part each year. Thanks to their help, we’ve been able to donate millions of LEGO sets to children across the globe, bringing them the joy and benefits of play.”

The #BuildToGive initiative is part of the LEGO Group’s broader ‘Build a Playful Holiday’ campaign, which will inspire families to enjoy being together and having fun by embracing Play over Perfection over the Holiday season. As part of the campaign, the LEGO Group’s Holiday icon of Play, Katy Perry, will be sharing a film showcasing her own gift that she built for #BuildToGive on social media. This will be released on her channels in the coming weeks.

“I love that the LEGO Group is helping turn family play into a moment of giving for families all around the world. I loved making my firework shaped gift and I can’t wait to see the different designs that other families share!” said Katy Perry.

The #BuildToGive page on LEGO.com will be filled with building inspiration as well as gift building tips to help families get as creative as possible with their designs. It will also include information on where they can build their gift in one of LEGO’s worldwide retail stores.

You can find out more information about the campaign and how to get involved at LEGO.com/BuildToGive.