LEGO Celebrate Pride Month with The A-Z of Awesome Campaign 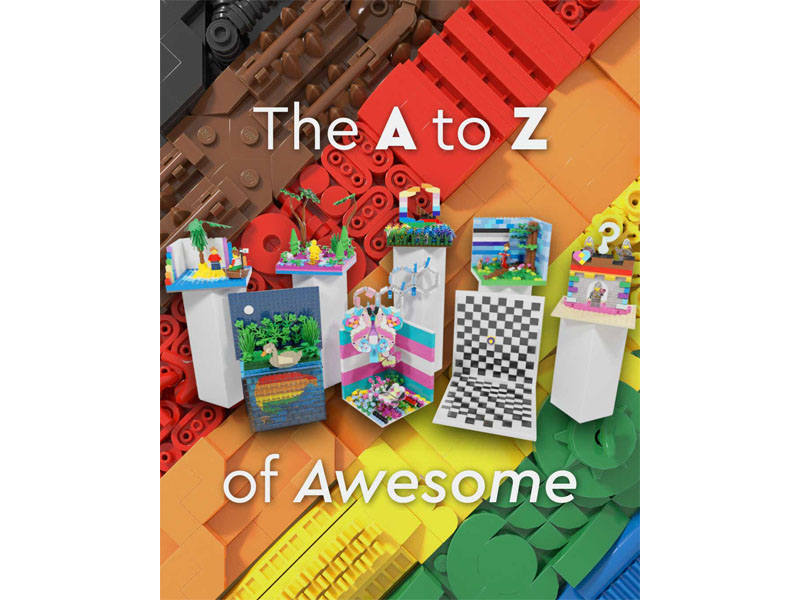 To celebrate Pride month, LEGO has started a new campaign called The A-Z of Awesome which celebrates inclusivity and self-expression in the LBGTQIA+ community by using LEGO bricks.

The A-Z of Awesome – Because Self Expression and Identity Matter

To mark Pride Month, the LEGO Group invites LGBTQIA+ families to bring their identity to life through creative self-expression

Billund, June 1st, 2022: The LEGO Group today announces its launch of the “A-Z of Awesome’, an ongoing campaign which runs into 2023 using LEGO builds to celebrate inclusivity and embrace self-expression in the LGBTQIA+ community.

The A-Z will be developed in creative LEGO creations to help LGBTQIA+ families use play to have open conversations about their identities. For the alphabet to be created in the most authentic and meaningful way possible, the designs of each letter will be created by members of the LGBTQIA+ community, including LEGO fans, young and old, members of the community and LEGO employees.

Launching during Pride Month, the alphabet aims to build understanding and acceptance of the LGBTQIA+ community and the different abbreviations used.

‘The A-Z of Awesome’ aims to present the community’s vocabulary more widely through a fun and playful medium. The LEGO Group is inviting submissions including an explanation of what the build means to its creator, which will be featured on a dedicated website www.LEGO.com/AtoZ.

“The wonderful thing about LEGO bricks is that they can be a powerful form of self-expression as you can build anything you can imagine. We also know people love talking about what they build, so we thought it would be a great medium for sparking important and sometimes difficult conversations about identity”, said Alero Akuya, VP of Brand Development (she/her), the LEGO Group. “We can’t wait to see what fans will submit of amazing builds and beautiful stories. We hope their creativity and our A-Z of Awesome campaign inspires people of all ages and helps build greater awareness and acceptance. We want to show people that with more love and understanding people can be their true selves.”

The creative inspiration for this campaign was born out of the insight from GLAAD that almost half (45%) of non-LGBTQIA+ people find conversations around gender identity confusing.

“As we start Pride month, it’s the perfect time for families to start new conversations about sexual orientation, gender identity and gender expression,” said GLSEN Executive Director Melanie Willingham-Jaggers (they/she). “It can sometimes feel overwhelming or confusing to start a conversation about LGBTQ+ identities, but you don’t have to be an expert to give children the accurate vocabulary they need to talk about these issues with compassion and respect. All children benefit from learning about the diverse world around them, and positive representation of LGBTQ+ identities, whether in school curriculum or in play, helps young people feel prepared to meaningfully engage in their communities. We’re proud to support the LEGO Group’s ‘The A-Z of Awesome’ campaign as a powerful tool to build a more tolerant and inclusive environment for LGBTQ+ families and young people.”

Intersex campaigner and ‘A-Z of Awesome’ contributor Pidgeon Pagonis (they/them), said about the campaign: “Growing up I remember feeling this sense of shame, like oh there’s something wrong with me, or the things I desire or want. This project is important because there might be an intersex person out there who likes to build with LEGO bricks, and this can help them see themselves represented. It would have been a game changer for me to see myself reflected in stories in popular media and culture.”

With recent research from GLAAD showing 59% of LGBTQ youth have been discriminated based on sexual orientation and/or gender identity up from 46% in 2020, while GLSEN reports 81% of LGBT youth have been verbally harassed just in the last year and almost 69% report feeling unsafe because of their sexual orientation, the LEGO Group continues to make a long-term commitment in raising awareness through campaigns to support the community.

The 2022 campaign for Pride month brings together the following:

• The A-Z campaign launches to invite the LGBTQIA+ community to express their identities through creative brick-building. It will serve as a call to action for others to submit their builds and stories to complete the alphabet. Selected builds will be added to the A-Z throughout the rest of the year, with the full alphabet being presented by the end of 2022.
• The LEGO Group will donate US$1 million to existing and new partner organisations in support of the LGBTQIA community. Keep an eye out for the reveal of these new partners on https://www.lego.com/sustainability/people/diversity-and-inclusion/.
• We will participate at Pride events e.g., in London and Munich, hosting fun & educational building activities.
• Our LBGTQIA+ Employee Advocacy Groups are arranging activities for LEGO employees, such as Drag Queen Story Time at our factory in Mexico and at our office in Enfield US, as well as internal sessions will be hosted featuring external consultants from the community.

In 2020, it partnered with UK charity Diversity Role Model, who works to embed inclusion and build empathy through educational workshops in schools and US organisation GLSEN who works to create safer and affirming learning environments for LGBTQ+ students and youth.

In 2021, the LEGO Group became an official sponsor of World Pride in Copenhagen where it had a family activity zone and introduced its Everyone is Awesome inclusivity set, as well as previewing its iconic Queer Eye set, which was released later in the year.

We also partner with Workplace Pride and Stonewall on an ongoing basis to use their tools, insights and advice to form our internal processes for LGBTQIA+ representation and inclusion; and Open for Business to advocate for global LGBTQIA+ inclusion.

The LEGO Group’s global goal is to increase representation across its portfolio. This covers products, programmes and marketing on all dimensions to reflect the diverse and global marketplace it operates in.