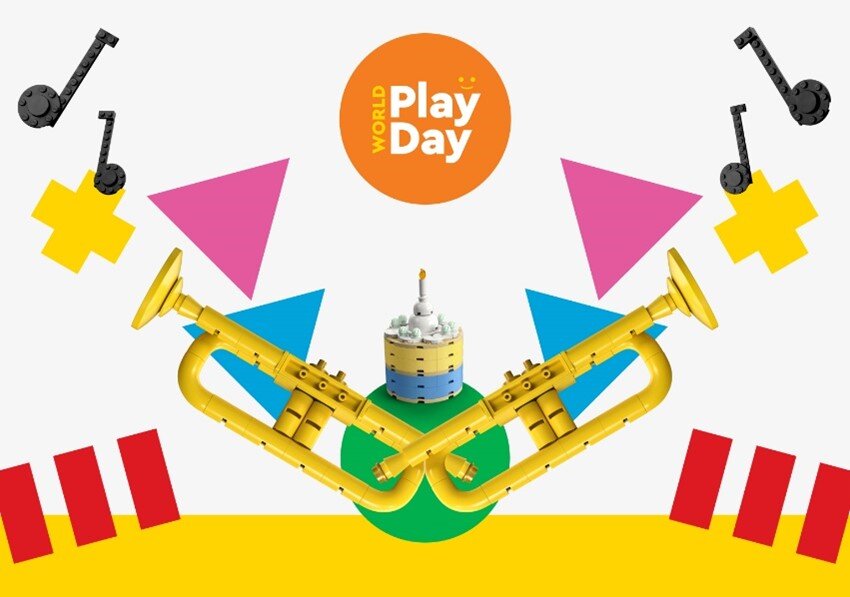 Today LEGO celebrates their 90th anniversary and is holding their first World Play Day. LEGO is holding various activities around the world for their 90 Years of Play.

The LEGO Group celebrates its 90th Anniversary with its first World Play Day as new research finds more than 80% of families want more play in their day.

Billund, Denmark: On Wednesday, 10th August, the LEGO Group will celebrate nine decades of fan creativity and helping children reach their full potential though LEGO® play. To mark the occasion, the brand will host its first ever World Play Day – a full day of play-packed global events, collaborations and surprises dedicated to helping families and communities play more.

From the moment Ole Kirk Kristiansen, a young Danish carpenter, picked up his tools and made his first wooden car in 1932 he was focused on making high-quality toys that teach children about the world and give them the skills to thrive in it. He named his company “LEGO” from “Leg Godt”, meaning “Play Well” in Danish. Inspiring fun, playful learning remains the toymaker’s purpose today.

In his small workshop in Billund, Demark, Ole hand-carved a collection of vehicles, ducks and yoyos and later started experimenting with plastic building bricks. His son, Godtfred, added a few small tubes to make the bricks click and stick together, officially launching the interlocking system we know today. The LEGO® brick that offers limitless creative building possibilities was born in 1958.

Since its inception, the iconic LEGO brick has featured in over 18,000 LEGO sets and inspired millions of children and fans to play and create. It’s helped them master engineering with LEGO® Technic; learn about robotics and coding through LEGO® MINDSTORMS®; explore friendships and adventure through the real and fantasy worlds of LEGO® Friends and LEGO® NINJAGO®, explore new digital playgrounds with over 85 mobile and console games and design some of the brand’s most popular sets with LEGO® Ideas. The brick was even celebrated in the bright lights of Hollywood in THE LEGO MOVIE™.

After ninety years of inspiring endless hours of play, the brand is dedicating its Anniversary celebrations to helping more families find a moment of play in the day, after new research found that families feel they don’t play enough.

The Power of Play

The new LEGO Play Well 2022 study polled 55,000 parents and children in 30 countries and found that while play changes lives and brings people closer together, in today’s world, families are finding it hard to prioritise.

But despite the many benefits of play, families feel they are missing out – the majority of children (82%) wish they could play more, and a third (34%) of parents feel their family doesn’t play together enough. Everyday responsibilities like working long hours (31%), chores (28%) and simply not having enough time (32%) are the biggest barriers to family play according to parents.

Mitchel Resnick, Professor of Learning Research at the MIT Media Lab, commented: “A little bit of play can go a long way. When children bring a playful spirit to activities throughout the day – making a fort out of blankets and pillows in the bedroom, making a musical instrument out of pots and spoons in the kitchen, making up a fantasy story with a parent or sibling while riding the bus – they learn to think creatively and work collaboratively, essential skills for everyone in today’s world.”

From 90 second play challenges to games that take just minutes, the LEGO Group and LEGO Foundation has the perfect playful activity for any family schedule, but World Play Day will be the company’s biggest invite to play yet. The day’s play-packed roster is full of inspiration to help families and communities find a quick and simple moment of playful joy; whatever their age, location or interests.

“When my great-grandfather founded the company 90 years ago, he recognised that play could change the lives of children – it brings families together and helps children develop skills that can enable them to reach their full potential. He only had a small workshop, but he had big ambitions to ensure as many children as possible could experience the benefits that play brings,” said Thomas Kirk Kristiansen, Chairman of the LEGO Group. “Whether 1932, 2022 or on our 100th Anniversary in 2032, we have and will always strive to continue Ole’s legacy by helping all families, wherever they are in the world, to play well.” continued Thomas.

Join in the fun

On the 10th August, the playful celebrations will include:

· Opening a vibrant new play space in West Harlem inspired by local children and their ideas to bring more play to their community, and designed and brought to life for the summer by visionary artist Hebru Brantley

· Inspiring families with 24 hours of exciting play ideas, building challenges and ‘What Brick Are You?’ quiz, available on LEGO.com, LEGO social media channels and LEGO Life

· Inviting families and fans into our LEGO stores which have been transformed into playgrounds with fun, anniversary-themed building activities, giveaways and display areas for creations to be showcased. Stores in Brussels, Copenhagen, Stockholm, Barcelona, Berlin and Wroclaw will also have entertainers and face painters

· Collaborating with adidas to bring play to the high streets of London, New York and Berlin with exciting playful takeovers of its flagship stores

· Showcasing children’s ability to turn mundane moments into playful adventures, and providing inspiration to help parents to do the same as part of the LEGO Foundation’s #PlayPledge movement

· And, unveiling a playful 94,128 piece LEGO birthday cake and inviting fans of all ages to experience a world of playful learning activities at LEGO House in Billund, Denmark.

Follow the hashtag #LEGO90years or visit LEGO.com/90-Years-Of-Play to join in the fun.