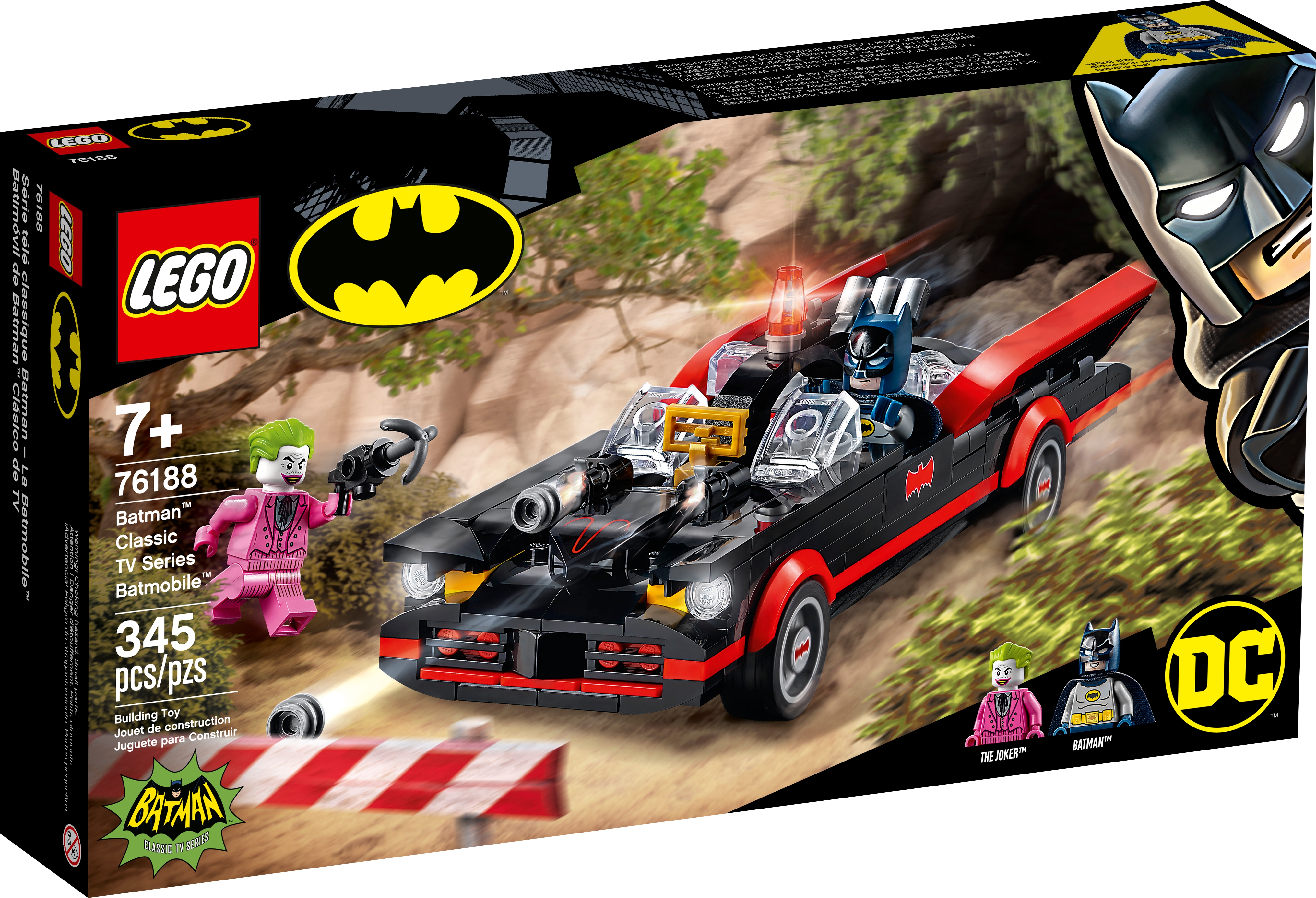 A few days ago, we got our first look at some of the upcoming LEGO DC Comics Batman sets and now we have pricing and official descriptions for the sets. Both sets will be available starting on April 26. The Batman Classic TV Series Batmobile (76188) has 345 pieces and will only retail for $29.99 which is a great price for it. The set does come with the classic Adam West Batman and Cesar Romero Joker but it does not include the Burt Ward Robin which is disappointing.

LEGO® DC Batman™: Batman Classic TV Series Batmobile™ (76188) gives kids all the style, action and excitement of the original 1966 Batman TV series. The iconic vehicle is packed with cool features and attaches to a rotatable stand.

Classic Batman vehicle and minifigures
Kids can play out endless Batman adventures with this impressive Batmobile, plus Batman and The Joker™ minifigures from the original TV series. This amazing vehicle includes an opening trunk containing a Batarang™ and additional bricks that kids can use to customize the car’s hood so it appears with or without the stud shooters. When the action’s over, the Batmobile can be displayed on a rotatable stand that lets kids display their awesome, crime-fighting machine at its best.

• LEGO® DC Batman™: Batman Classic TV Series Batmobile™ (76188) gives super-hero fans the style, action and excitement of the original 1966 Batman TV series.
• Includes a buildable Batmobile™, which can be assembled with or without shooters, plus Batman™ and The Joker™ minifigures – all in the classic 1960s style – and a rotatable stand.
• Young super heroes can speed through GOTHAM CITY™ with Batman™ in his Batmobile™ to catch The Joker™. When the action’s over, the vehicle attaches to a rotatable stand with a descriptive baseplate.
• For ages 7 and up. An ideal birthday, Christmas and holiday gift or special treat for Batman™ fans who would appreciate something extra special.
• The Batmobile™ measures over 2.5 in. (6 cm) high, 7.5 in. (20 cm) long and 2.5 in. (7 cm) wide and combines easily with other LEGO® DC Batman™ sets.
• The original 1966 Batmobile™ didn’t feature any shooters, therefore extra bricks have been added to this set so the car’s hood can be easily rebuilt to appear just as it was in the series if desired. 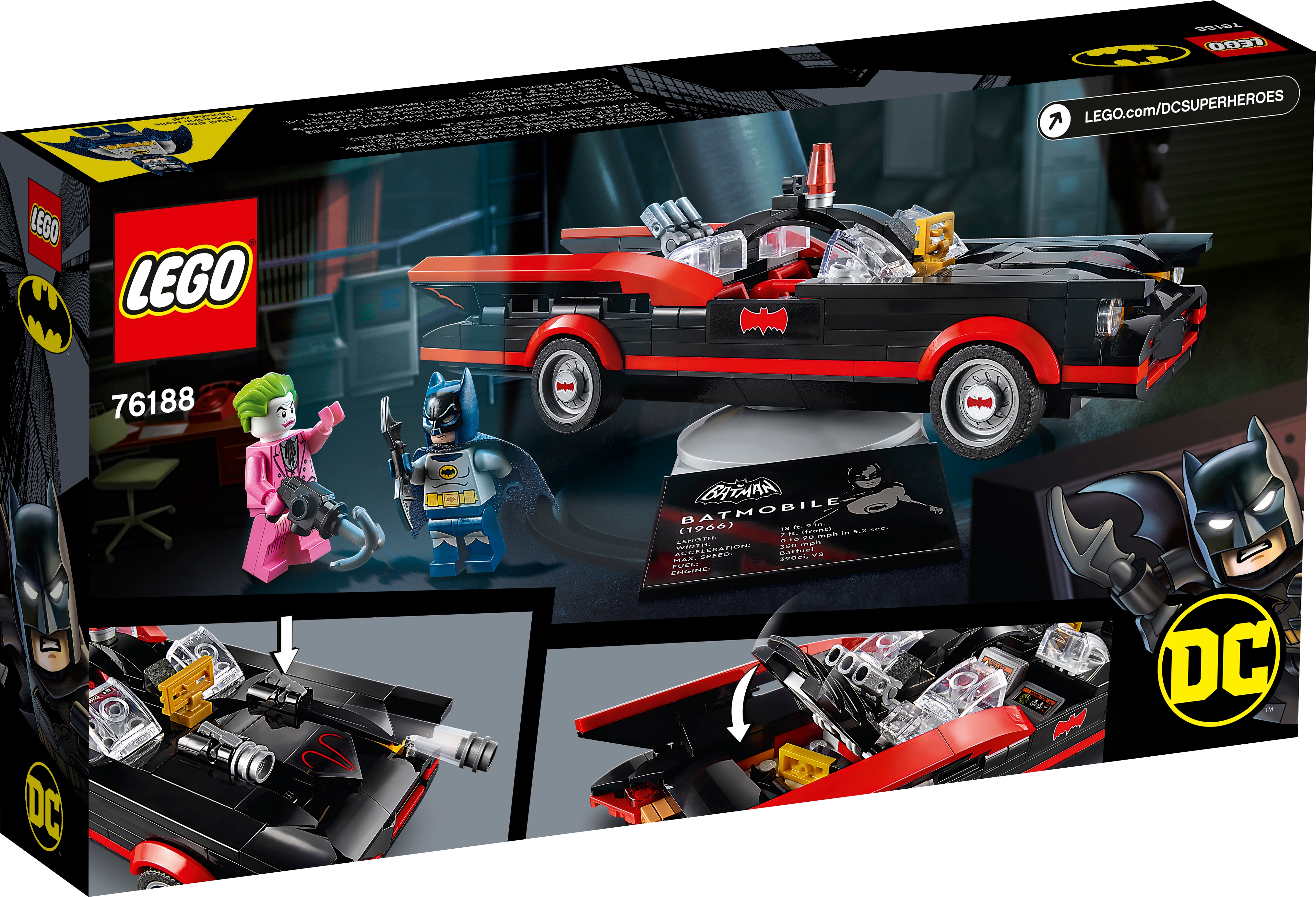 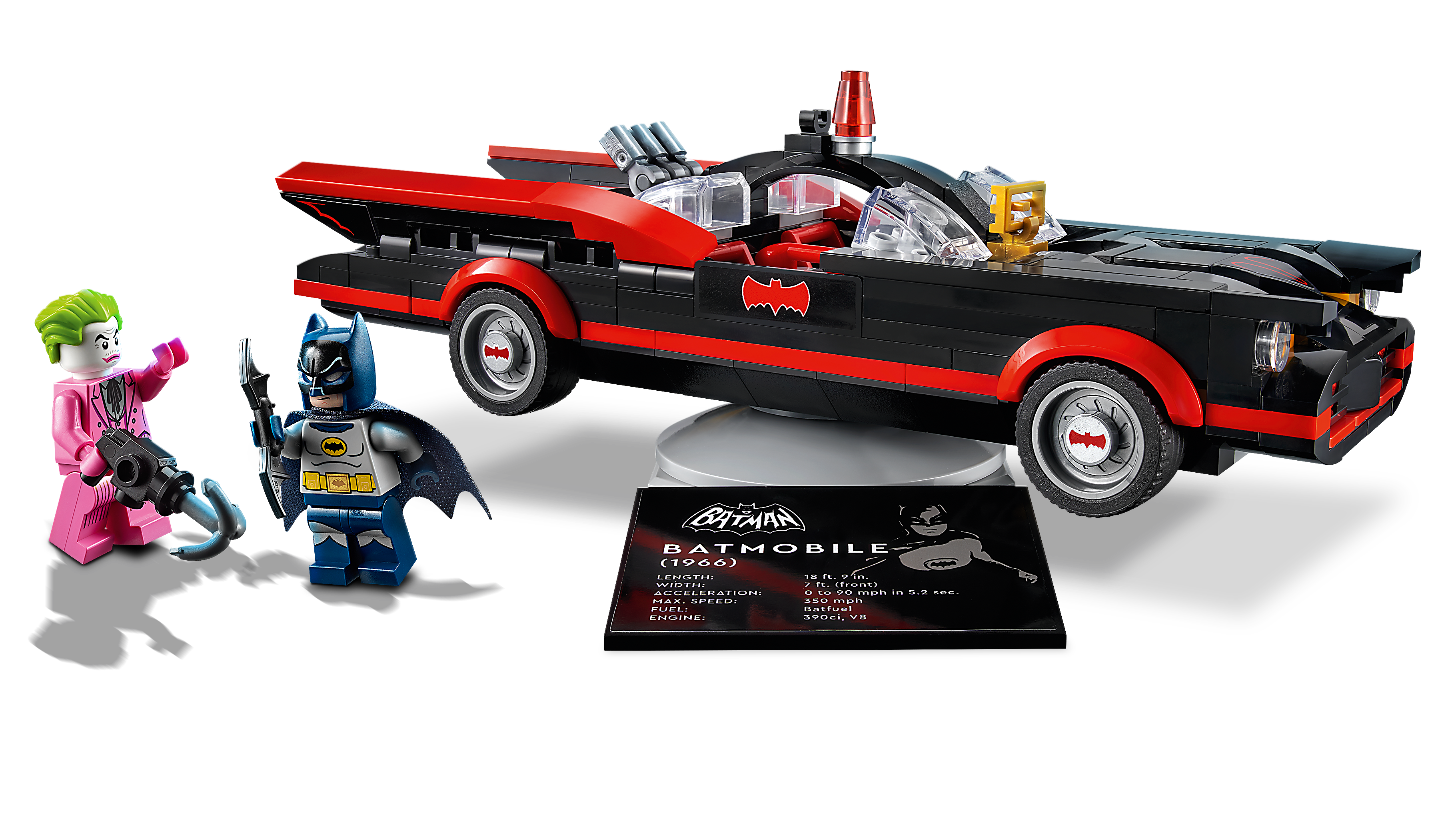 The other set is a 4+ one called Batman vs. The Joker: Batmobile Chase (76180) which also retails for $29.99 but it only comes with 136 pieces. The minifigures included are Batman, Batgirl, and the Joker.

LEGO® DC Batman™: Batman vs. The Joker™: Batmobile™ Chase (76180) is a versatile playset featuring legendary characters and amazing vehicles. Designed especially for ages 4 and up, it inspires shared play and encourages developmental benefits.A super start for young super heroesThis LEGO 4+ set introduces young super heroes to creative construction and endless imaginative fun. A special Starter Brick car chassis helps youngsters build the Batmobile “by myself”. A simple guide to building and getting the most from the toy is included. For more building fun, the free LEGO Building Instructions app includes digital Instructions PLUS, which allows kids to zoom, rotate and visualize their playset as they build.Fun for all the familyA LEGO 4+ playset is a special treat for any child, and for the rest of the family too. As adults pass on their construction skills, they share precious developmental milestones with their budding builder.

• This supercool LEGO® DC Batman™: Batman vs. The Joker™: Batmobile™ Chase (76180) super-hero playset is designed to boost the imagination, dexterity and building confidence of youngsters aged 4 and up.
• Includes Batman™, Batgirl™ and The Joker™ minifigures, a buildable Batmobile™ toy, a wacky hot rod, bank vault and a host of authentic extras.
• When The Joker™ uses his hot rod to steal a bank vault full of money, kids help Batman™ and Batgirl™ fire the Batmobile’s weapons, throw the Batarang™ and shoot a grappling launcher to stop him.
• This LEGO® 4+ set is specially designed with a Starter Brick chassis and simple building steps so youngsters aged 4 and up can learn to build and develop creative confidence as they go.
• The Batmobile™ measures over 2 in. (6 cm) high, 8 in. (20 cm) long and 2.5 in. (7 cm) wide, big enough for epic adventures and perfectly sized for small hands to pick up and play with. 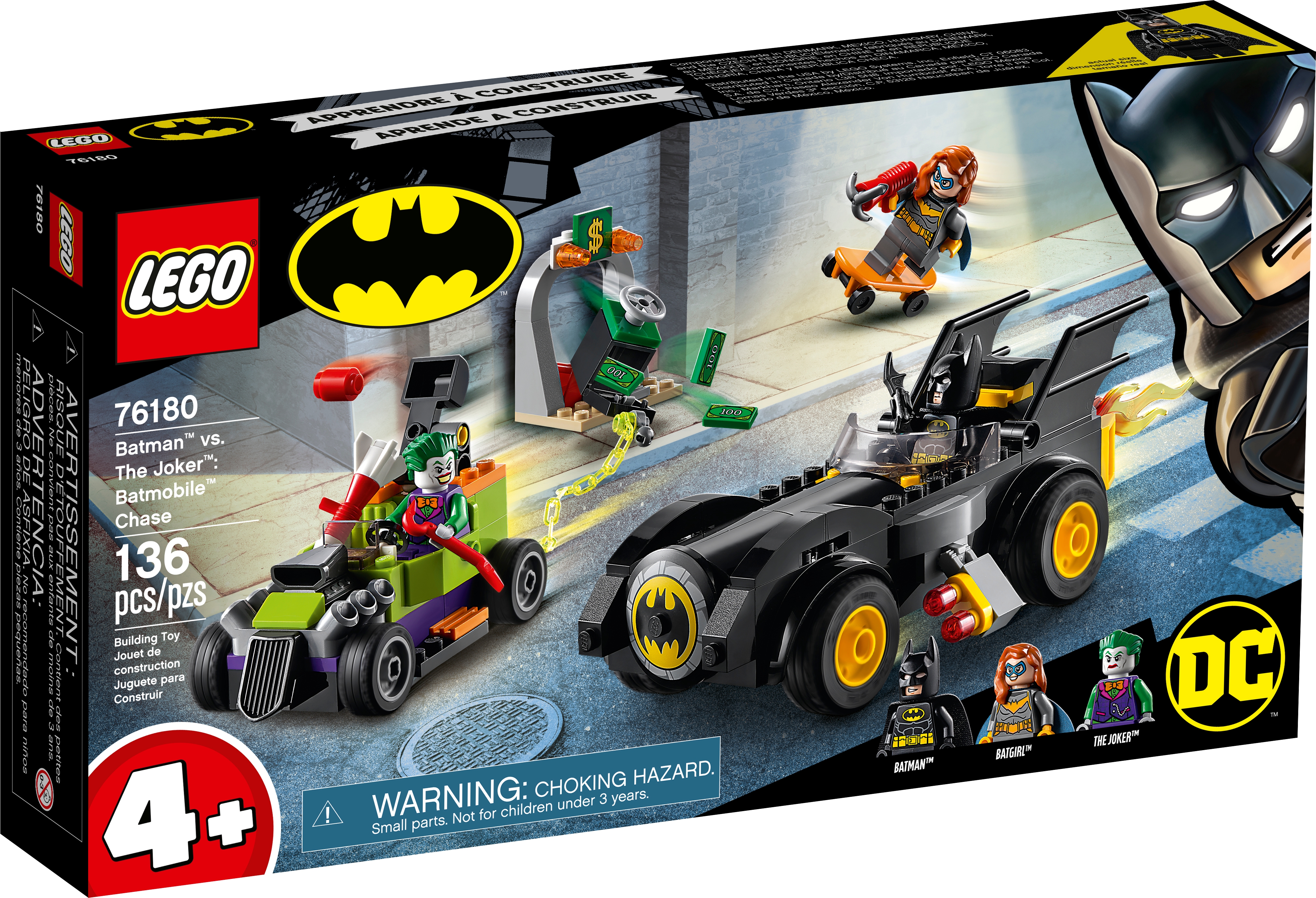 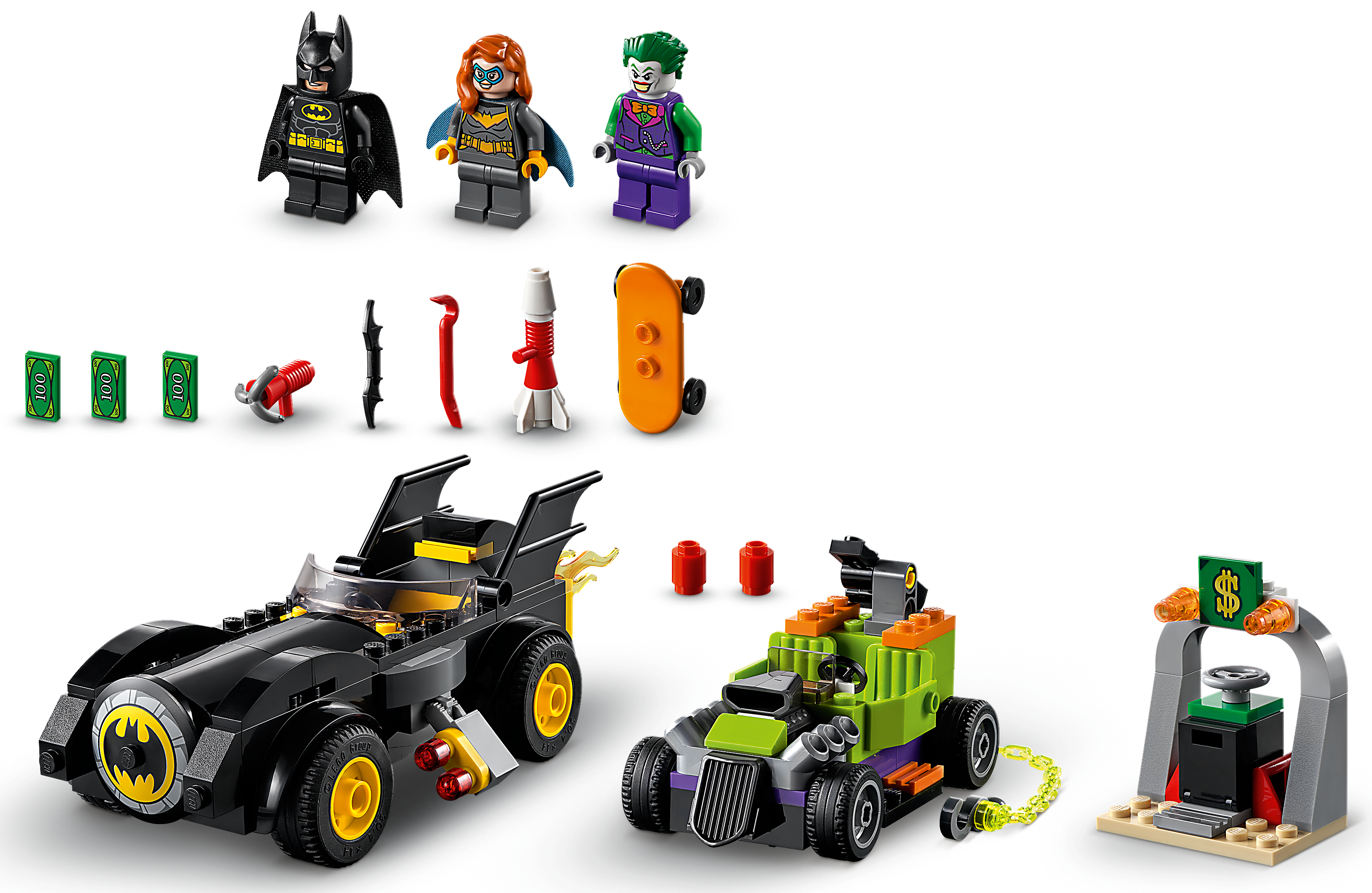