Continuing the theme of the LEGO DC Universe Super Heroes sets, this time we get the Catwoman Catcycle City Chase (6858). This is the smallest of the DC Universe themed sets coming in at 89 pieces and retails for $12.99. That’s $0.15/piece which is not that good considering what you get in the set and only has two minifigures. 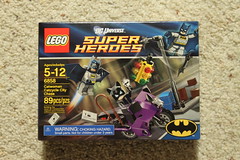 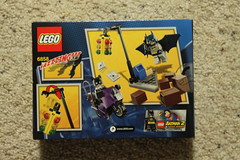 As I mentioned before, there’s only two minifigs in this set: Batman and Catwoman. Batman is in his Classic blue and gray suit and has a double-sided face. He also has a jetpack which is attached to the wings. The wings are a hard plastic and replace the cape that we normally see on Batman. He has two Batarangs as his accessories.

For me, Catwoman is a decent figure but it doesn’t stand out. She does have a double-sided face as well, one side with a visor over her eyes and one without. Personally, I like the one with the visor. She has some good detailing on both sides of her torso. Her accessories include a whip and a diamond gem. 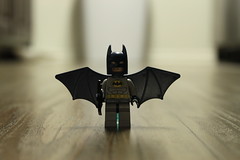 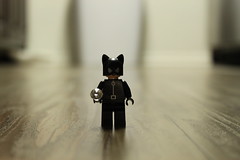 There are three parts to this “build.” The Catcycle is a very simple build, a little too simple if you ask me. The majority of the bike is the purple plastic frame mold. You only add the wheels and some lights. There also a place to attach Catwoman’s whip. The problem with the bike is the front wheel does not spin that well because it’s catching on the front part of the frame.

The next part of the build are the brown crates. There are two larger storage crates and threes smaller brown ones. There’s nothing special about them but they add depth when combined with the other part of the set…

Which is the street corner with traffic light. There’s also a mailbox and a newspaper stand. The main feature in this part is the traffic light which hangs on a wrench and is able to fall off. 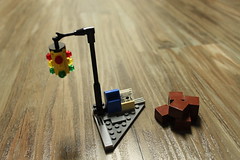 Catwoman Catcycle City Chase set is a pretty okay set and the main attractions are the minifigures themselves. There are many pros and cons with this set. The price isn’t that good but you get two really detailed minifigs in Batman and Catwoman. This set is able to compliment other LEGO sets as well.

A deterrent of the set is the price. $12.99 is a little much for only a 89 piece set but licensed sets will normally have higher prices. Also, the Catcycle doesn’t run as smoothly as I had hoped.

Other than the few issues, I would recommend picking it up just because it’s Batman! Prices for this set will definitely go up once LEGO discontinues it in a few years. Pick a few up and watch your investment go up in a couple of years. 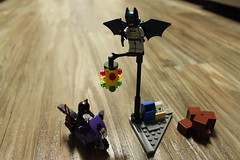