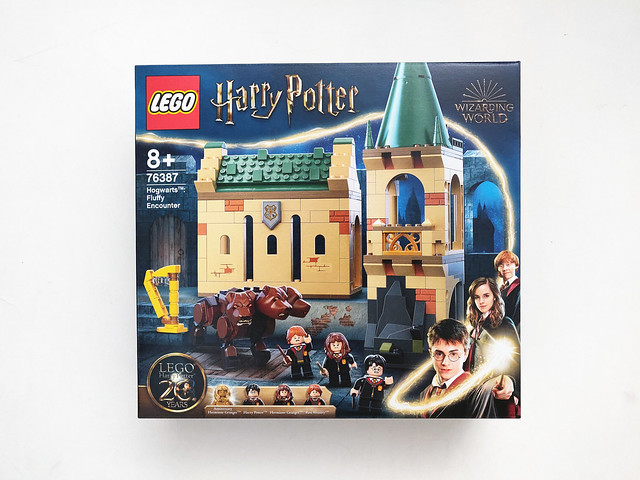 Continuing on with my reviews of the summer 2021 LEGO Harry Potter sets, the next one I’m checking out is the Hogwarts: Fluffy Encounter (76387). The set has 397 pieces and retails for $39.99. This set is based on a scene from The Sorcerer’s Stone. 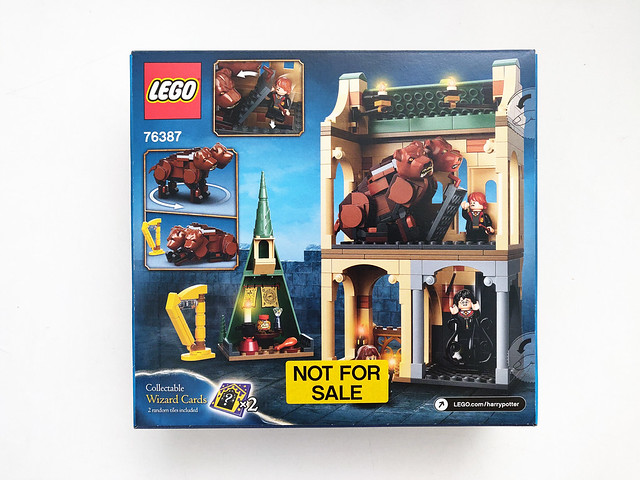 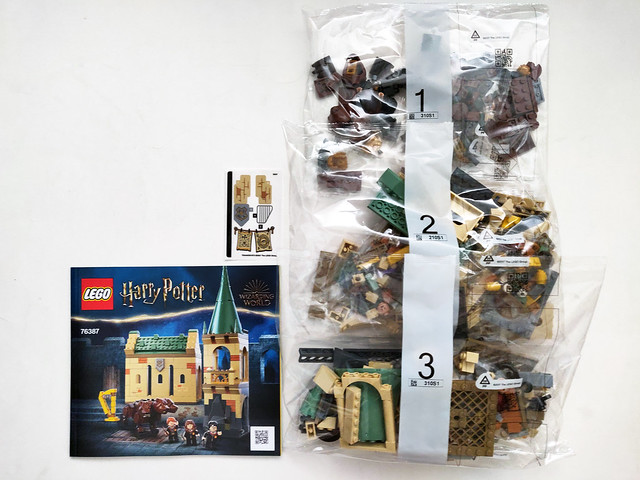 There are four minifigures in this set, Harry Potter, Ron Weasley, Hermione Granger, and golden Hermione. Harry is in this Gryffindor robe with short legs since they are in their first year. He has a double-sided head with a smile on one side and a scared look on the other. His accessory is a dark brown wand. 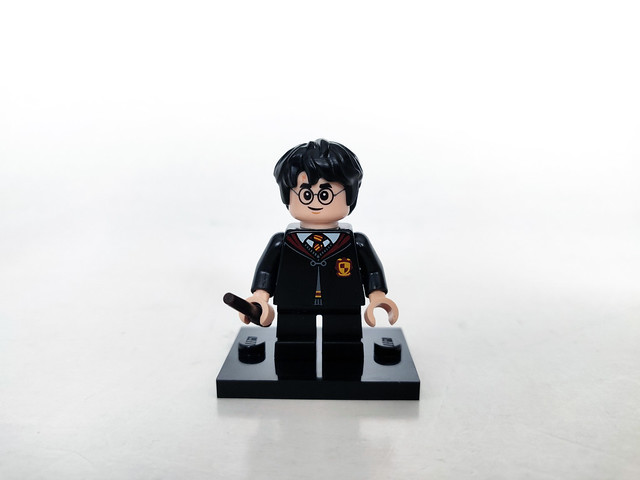 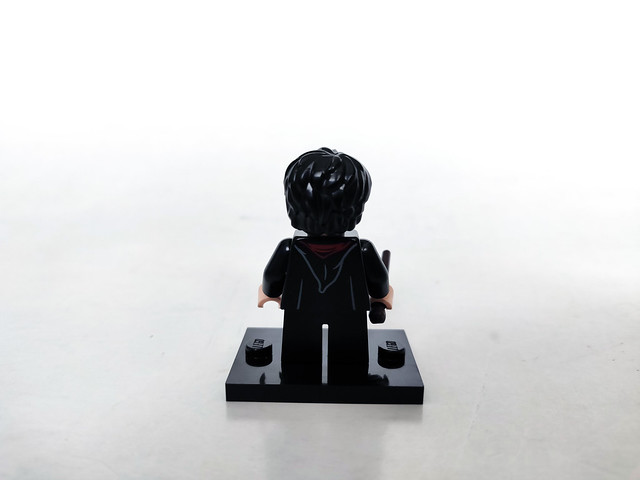 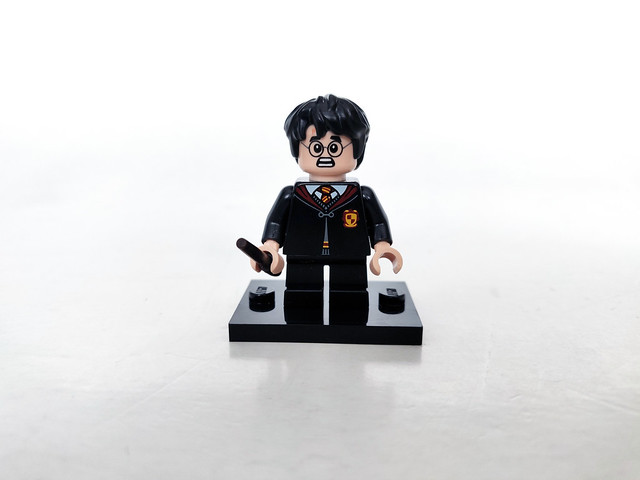 Ron’s robe slightly different with it open and showing more of the gray sweater. His double-sided head also shows him smiling and scared. His accessory is a brown wand. 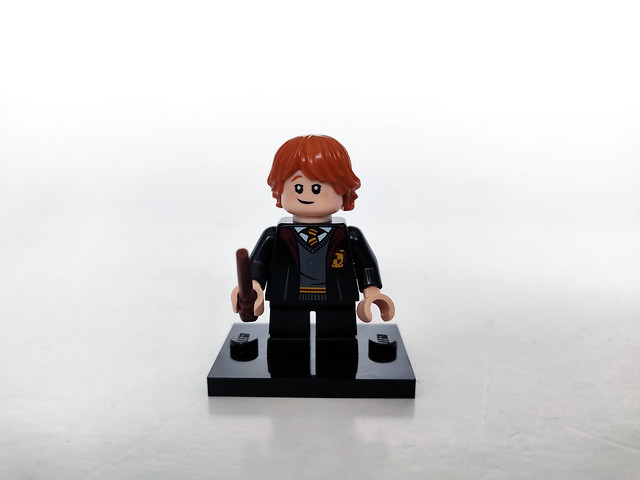 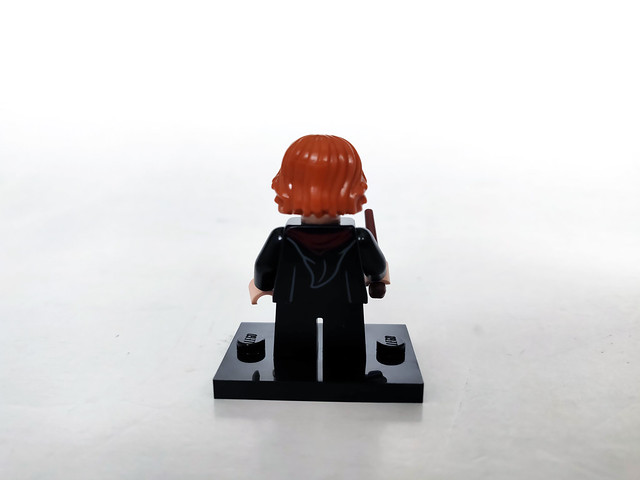 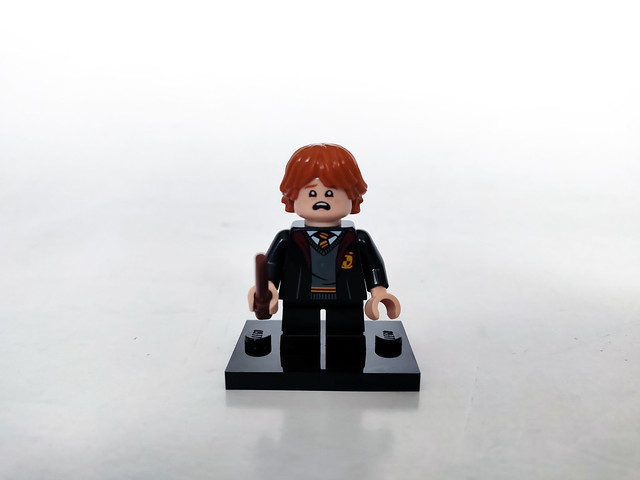 Hermione’s outfit is pretty much the same as Harry’s. Like Harry and Ron, she has a double-sided head showing smiling and scared expressions. Her accessory is a tan wand. 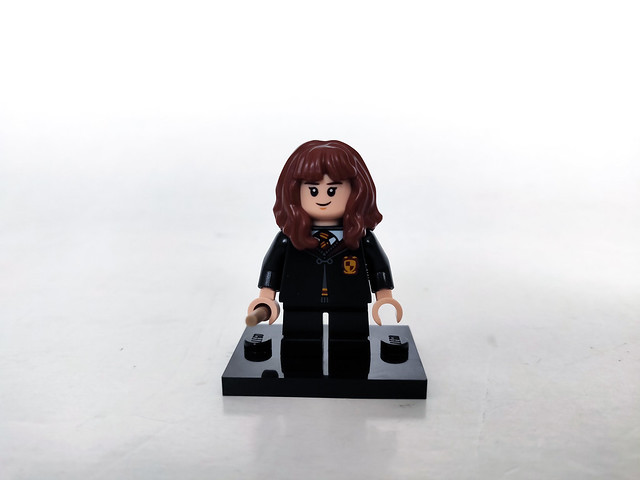 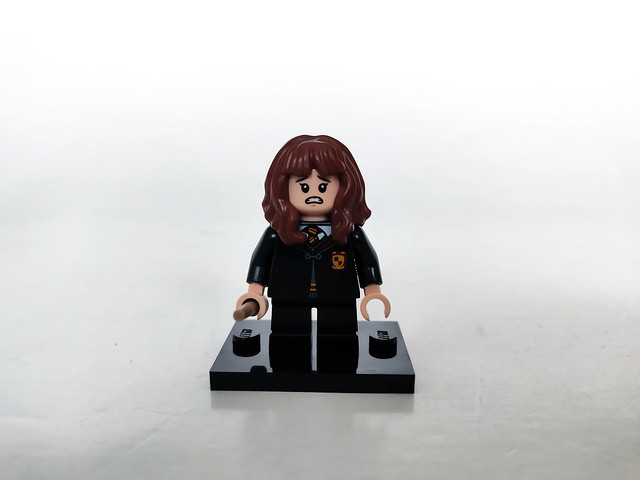 Golden Hermione is in her sweater outfit and the whole minifigure is pearl-gold down to the wand and the baseplate. The back of the torso shows the 20 years of LEGO Harry Potter. 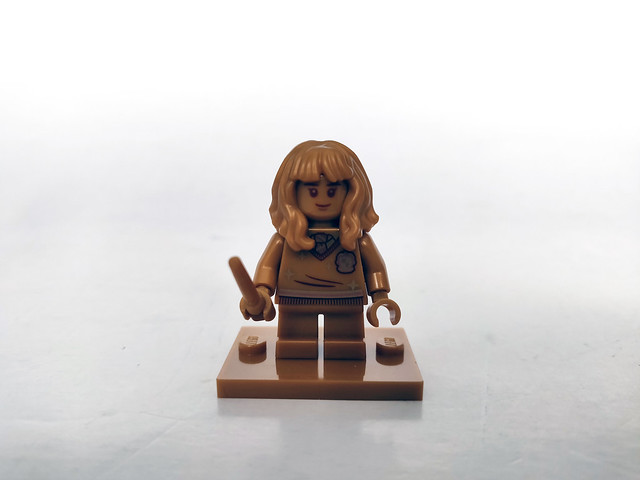 There are two Wizard Cards to collect in this set. The ones I got in this set are Seraphina Picquery and Bernie Bott. The is only the second set from this wave that I’ve reviewed and I already got a duplicate of Bernie Bott so we’re down one card. LEGO states that these cards are randomly packed into sets so you could get different ones from what I got. 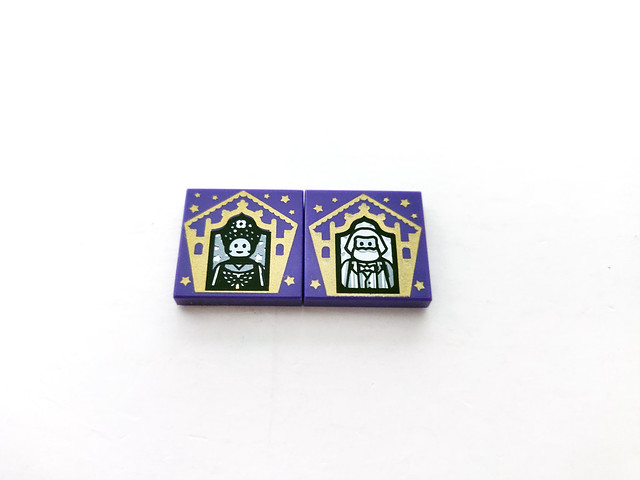 There are various parts of Hogwarts Castle that are represented in this set. For the smaller sections, there is one for a simple balcony. There’s nothing much going on here except for a couple of torches on the interior. 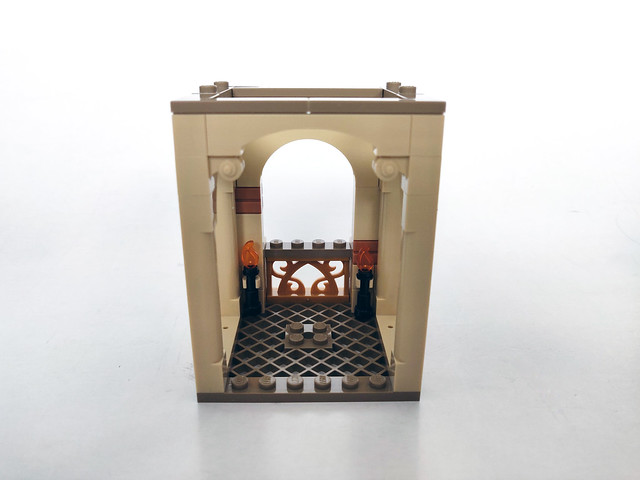 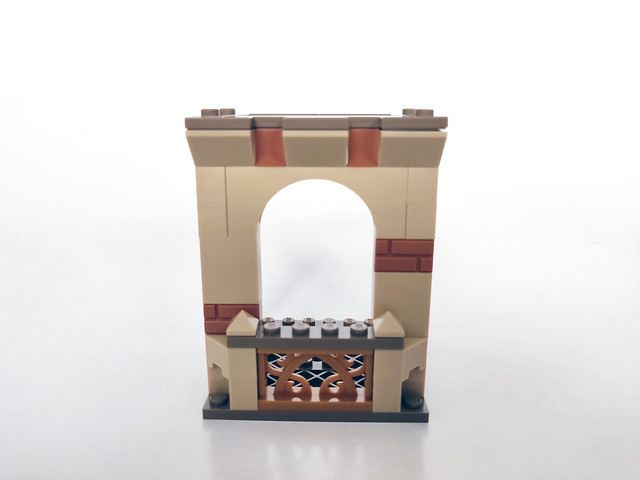 The other small area is for the Devil’s Snare which is shown with some black vines. The outer wall makes use of a rock piece. 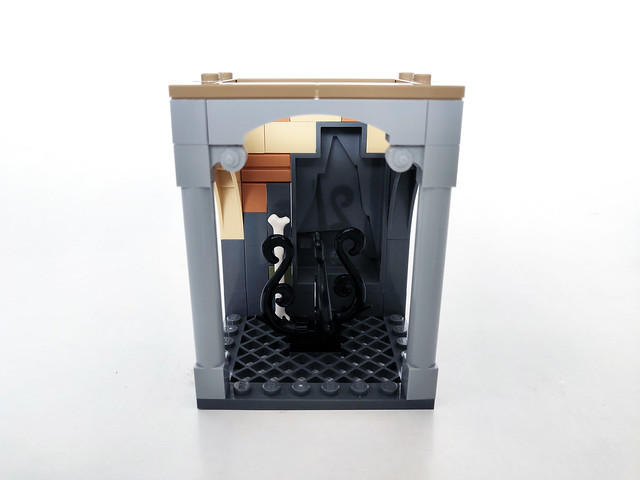 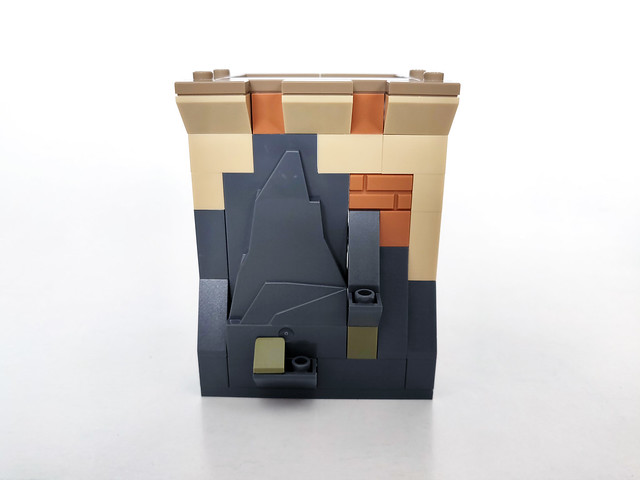 The tower area LEGO states is a magic practice room that is filled with various magical objects. I’m guessing it could be a small part of the Room of Requirement. There’s a table filled with small objects like a candle and a couple of potions. There’s a sticker that you have to put on the tower cone piece and it’s actually a little difficult to put on straight because you have to compensate for the curve. 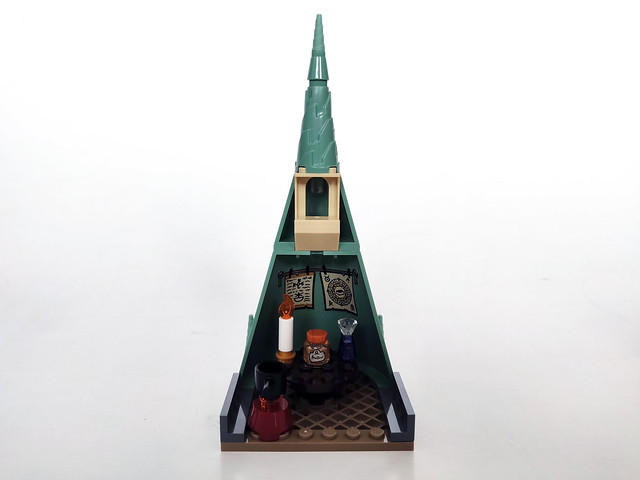 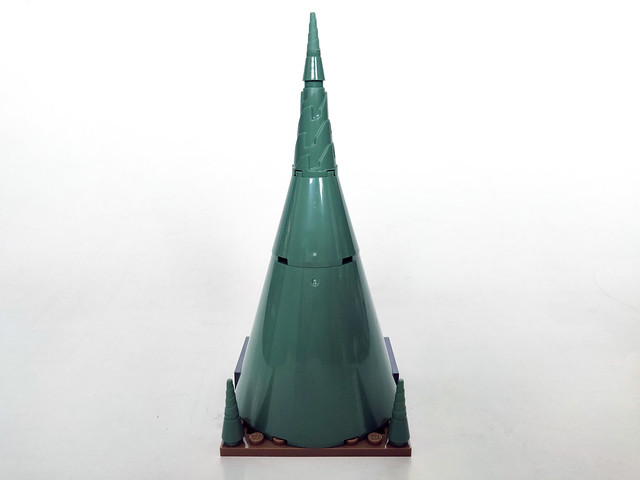 On to the larger section of this set where Fluffy resides, the outer wall has a couple of stickers for detailing, one of which is for the Hogwarts crest. The inside is pretty bland except for the chicken leg in the corner. There’s also a trap door on the right side which drops down to the Devil’s Snare. To complete the scene with sleeping Fluffy, there’s a brick-built harp that uses a sticker for the strings. 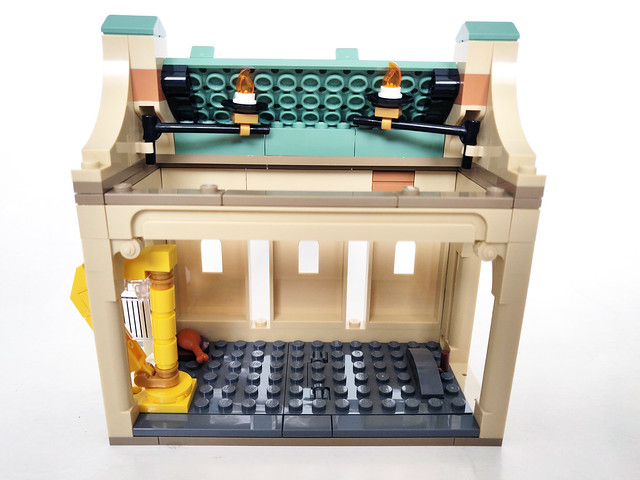 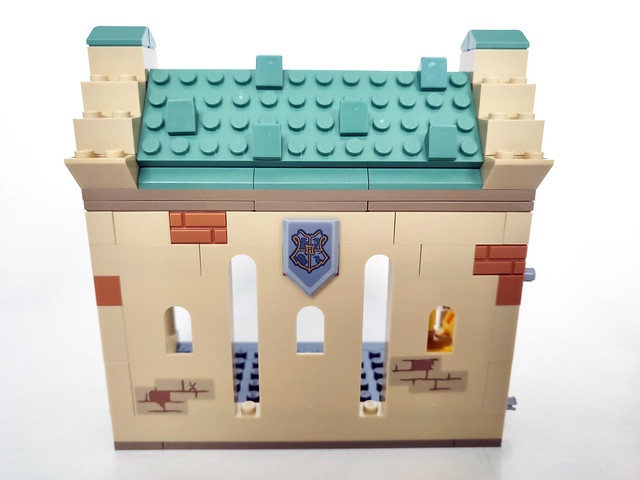 Speaking of Fluffy, he is brick-built as well. There is limited movement in the legs as they attach to the body using Technic pins and the and the knees are on hinge plates. Fluffy’s three heads are all different. There’s one with a snarling expression, one with just an angry look, and the last one is a sleeping one. 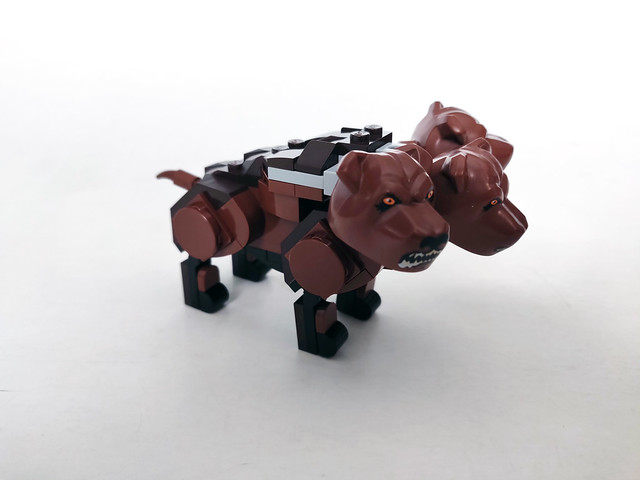 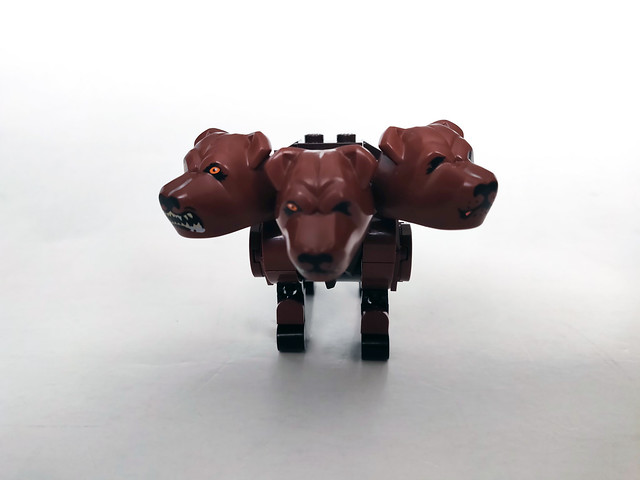 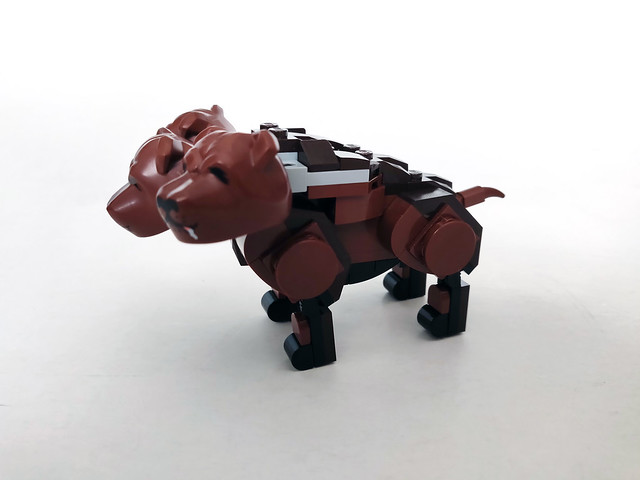 Since these summer sets are build and swap ones, you can arrange the sections any way you like. Since the Devil’s Snare room needs to be under Fluffy’s area, you’ll probably need another set to combine it with to get the arrangement accurate.

Overall, the LEGO Harry Potter Hogwarts: Fluffy Encounter (76387) is an okay set for me. There’s not that much that really wowed me with this one and given the price point, it could be better. My favorite part of the build was maybe the tower section with the magic room. Fluffy is alright and good enough with the number of pieces it has. I would wait for a sale if you’re thinking about picking it up as $39.99 seems a little too high for what you get. 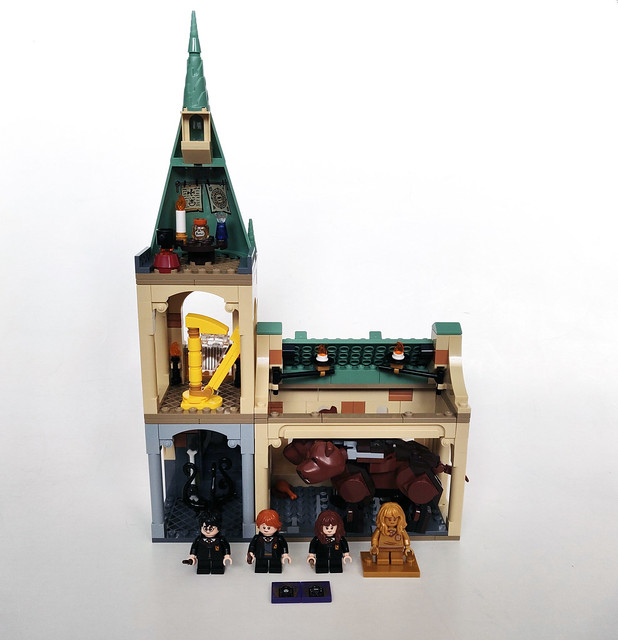