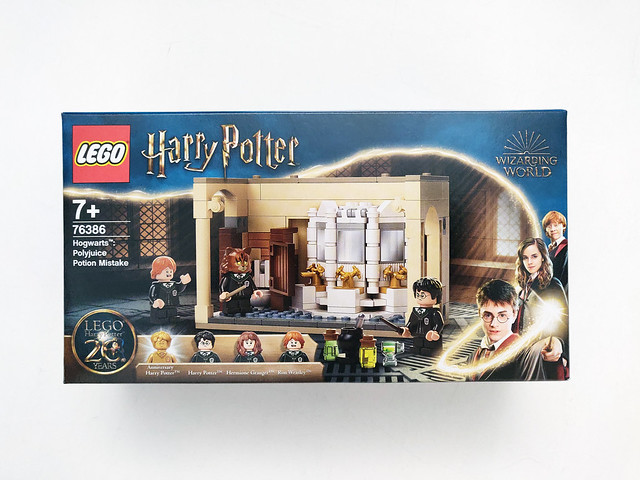 In our first review of the summer 2021 wave of LEGO Harry Potter sets, we have the smallest one in the wave with the Hogwarts Polyjuice Potion Mistake (76386). It has 217 pieces and retails for $19.99. 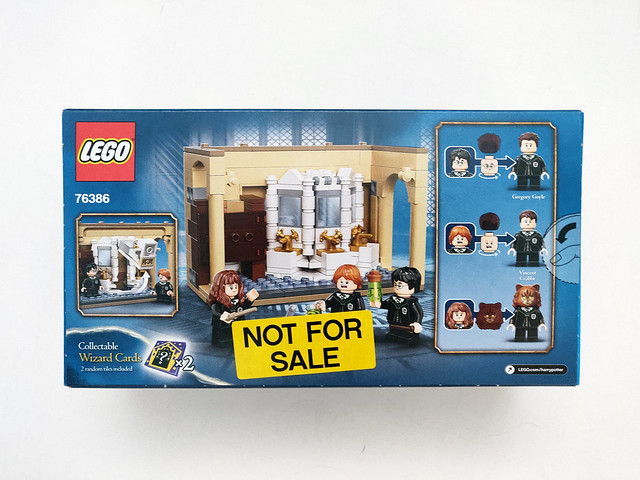 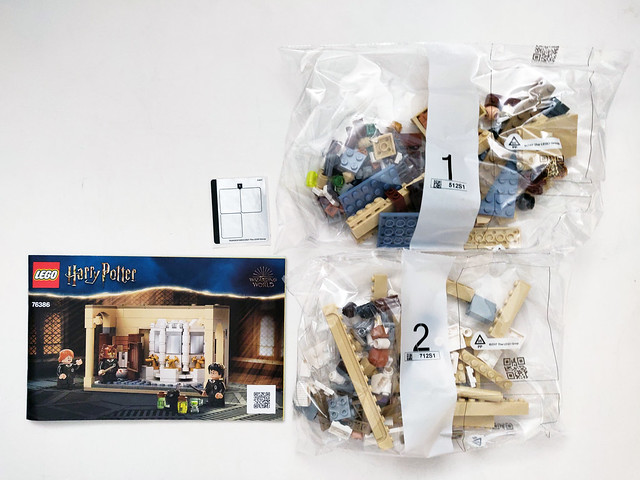 There are four minifigures in this set, Harry Potter, Ron Weasley, Hermione Granger, and Golden Harry Potter. Regular Harry shows him with the Slytherin robes because in this scene, he changes into Gregory Goyle after he drinks the polyjuice potion. The double-sided head shows Harry with a angry expression shows Goyle’s face. His accessory is a dark brown wand and Goyle’s hair. 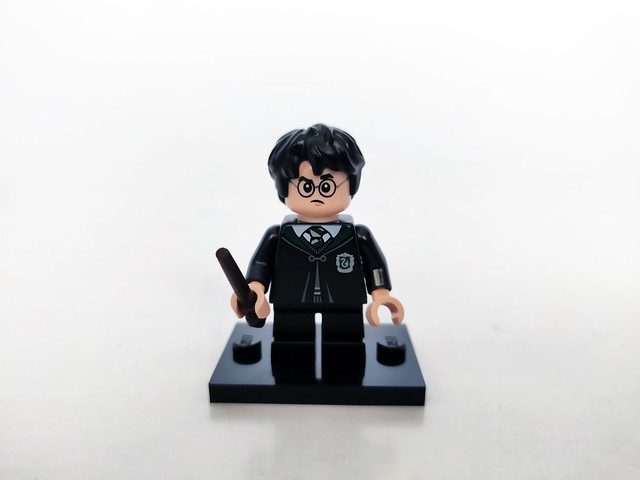 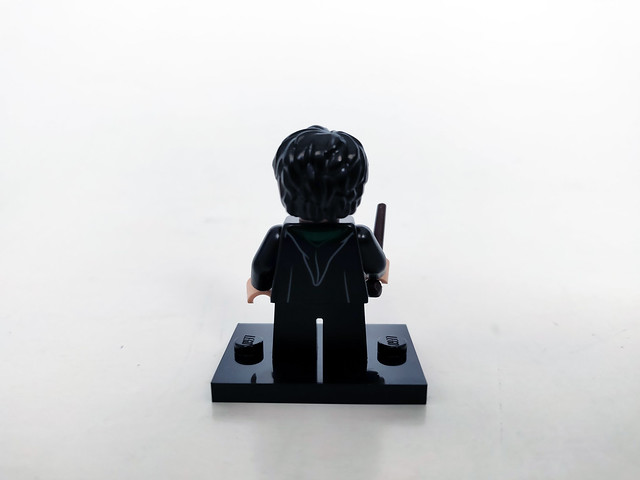 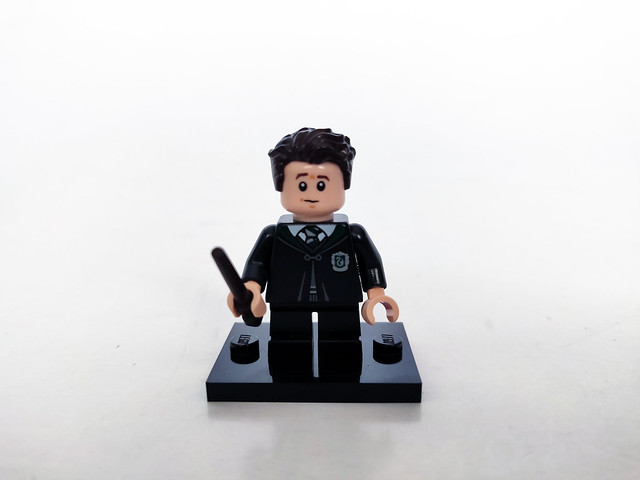 Ron also has on the Slytherin robes and his double-sided face shows him with a scared expression and the other side with Crabbe’s face. His accessory is a brown wand and Crabbe’s hair. 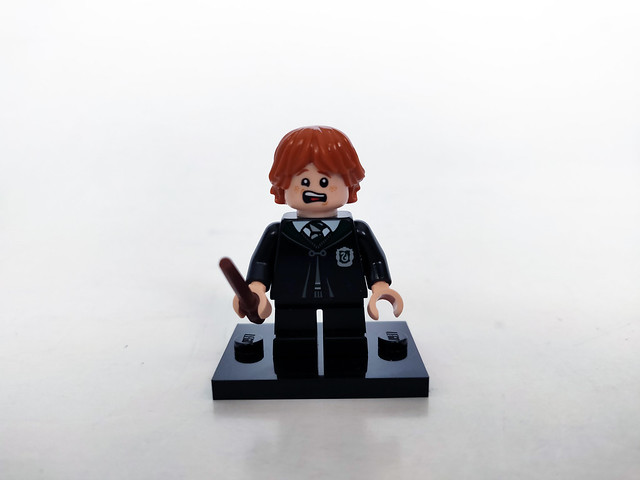 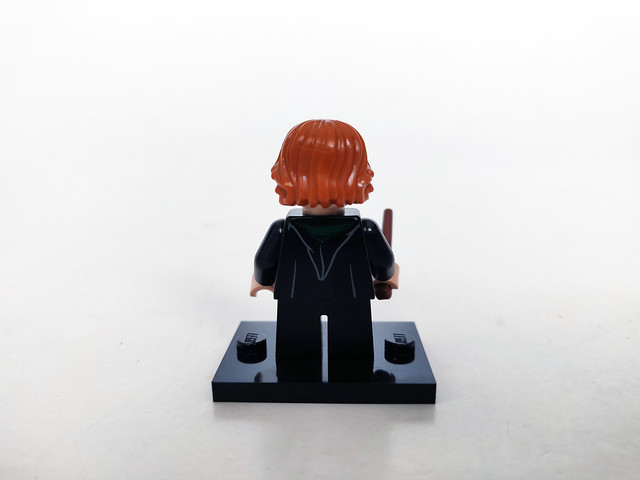 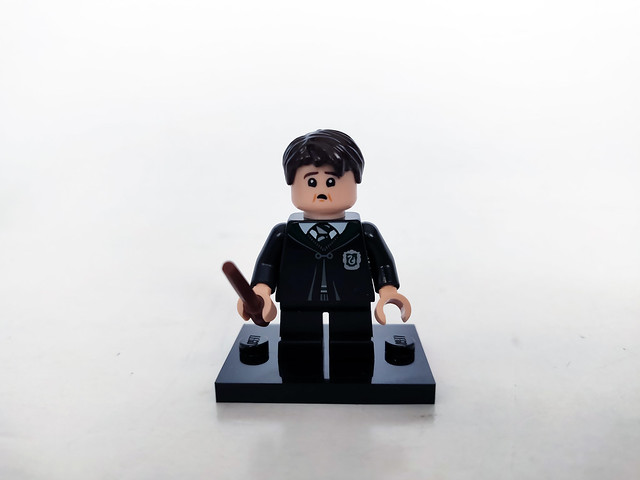 Like Harry and Ron, Hermione also has on Slytherin robes as she thought she got hair from Millicent Bulstrode but it was actually from Millicent’s cat. As a result, Hermione partially turns into cat which is represented by a new cat head mold. She does have a double-sided head showing a smile on one side and a scared expression on the other. Her accessories include a tan wand and a trans-green cup. 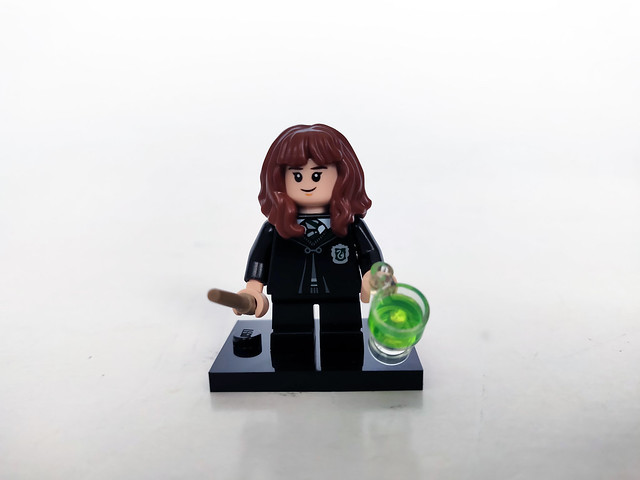 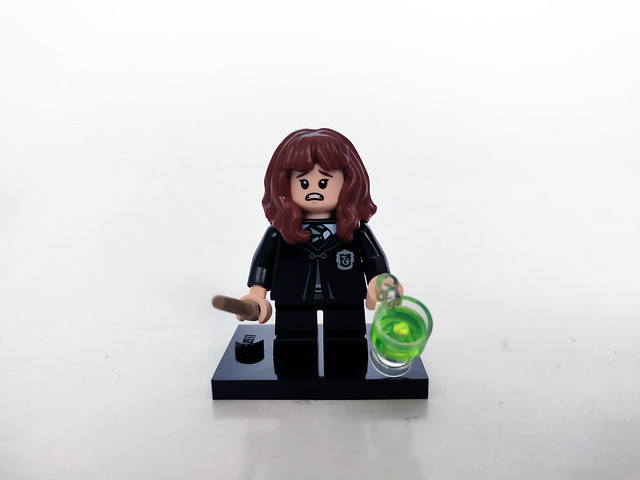 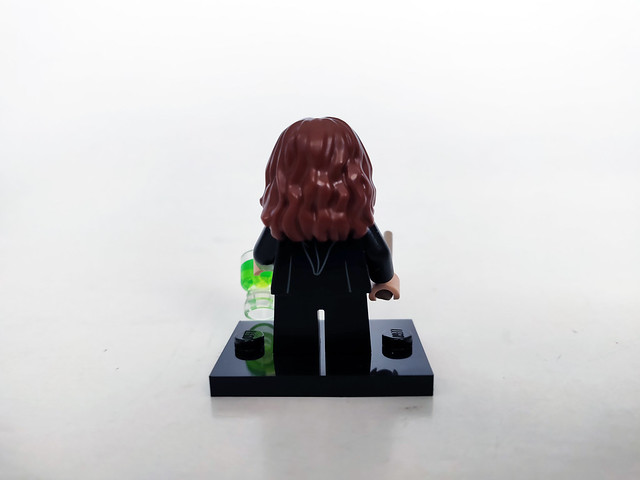 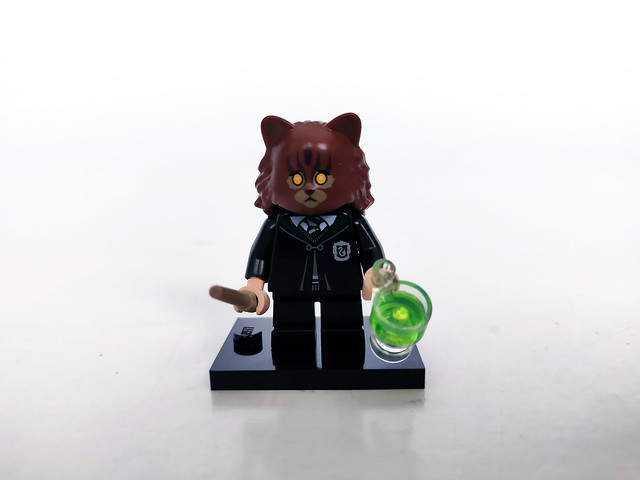 To celebrate the 20th anniversary of the LEGO Harry Potter theme, LEGO will be releasing golden minifigures in sets to celebrate the event. In this set, we get Golden Harry Potter. He’s in his Gryffindor outfit but everything is in pearl-gold. There’s even some metallic stars on the front of the torso to show it being shiny. The back of the torso shows 20 years of LEGO Harry Potter. The head for this Harry is just single-sided. What’s nice is that the plate is also pearl-gold and builders may like this piece as I believe this is the first time this part has been in this color. 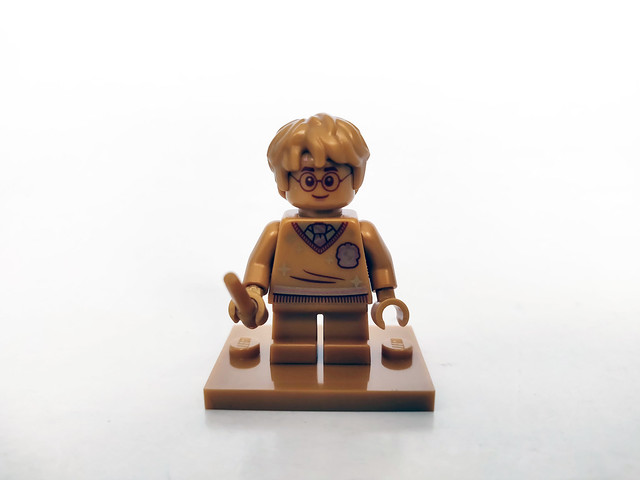 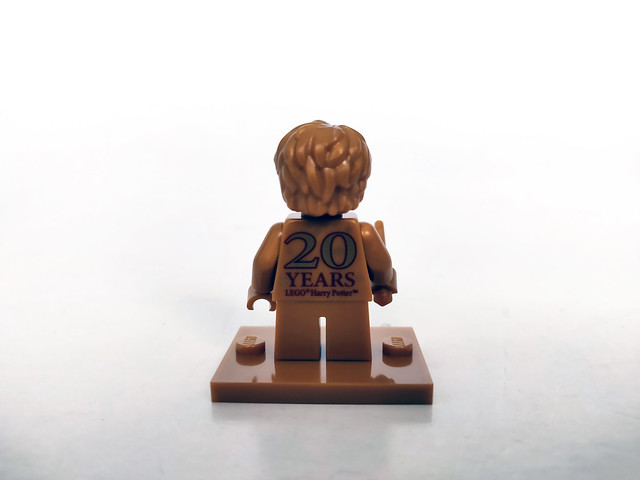 For this set, the Wizard Cards that I got were Bertie Bott and Rowena Ravenclaw. I will note that Rowena Ravenclaw isn’t shown in the guide on the back of the instructions because her image has been replaced by Garrick Ollivander on accident. LEGO states that these cards are randomly packed into sets so you could get different ones from what I got. 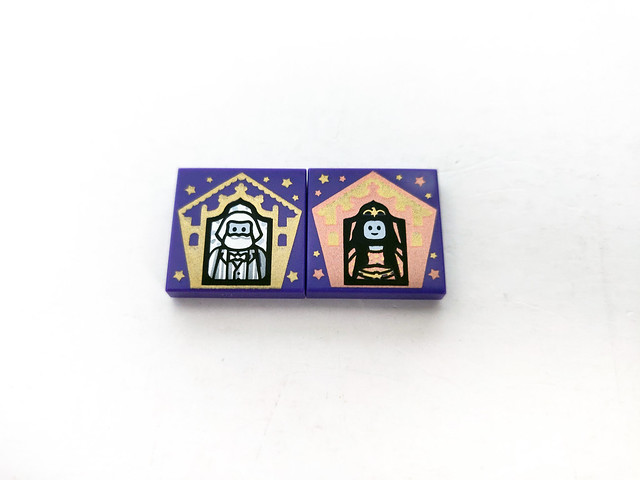 The build features Moaning Myrtle’s bathroom and the size of it is 8 studs by 16 studs so it’s fairly small. The left side has a bathroom stall with an opening door. The majority of the bathroom is actually the sink area. It has three faucets with their own sink as well as mirrors which are stickers. 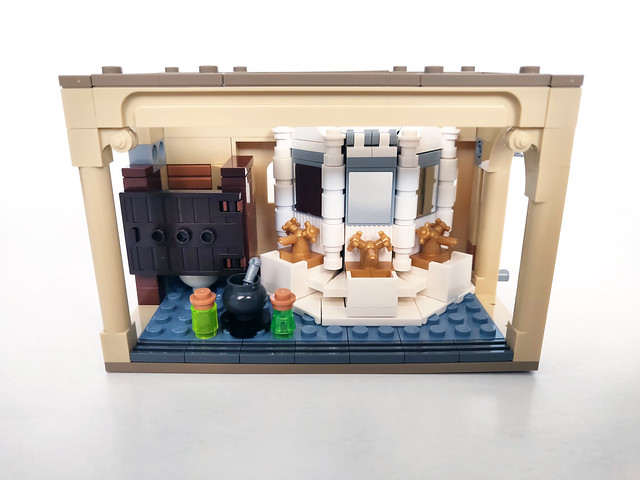 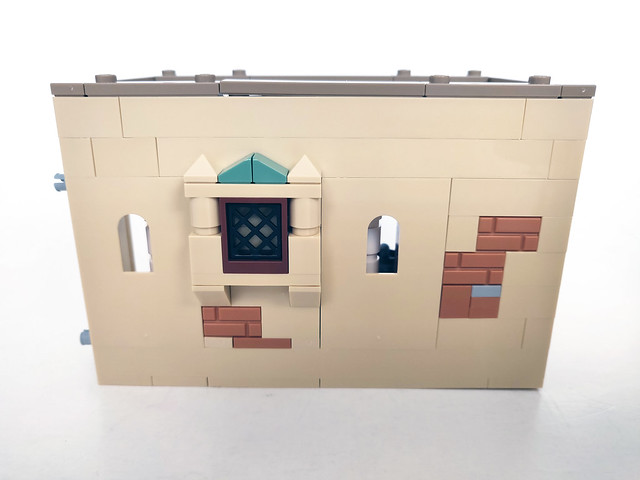 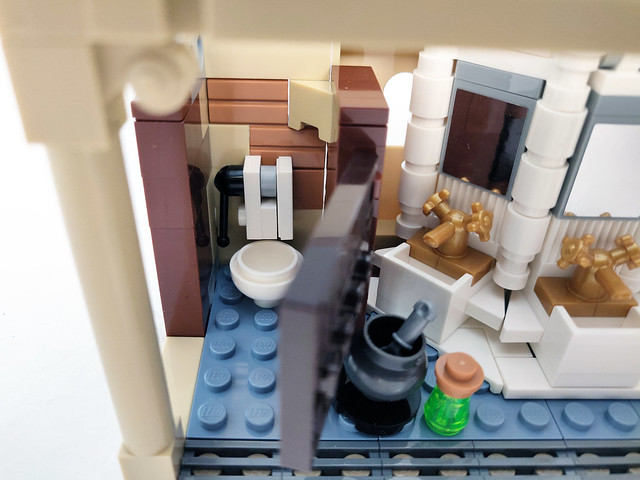 Since Moaning Myrtle’s bathroom is also used for the entrance to the Chamber of Secrets, the middle sink is able to lift up. 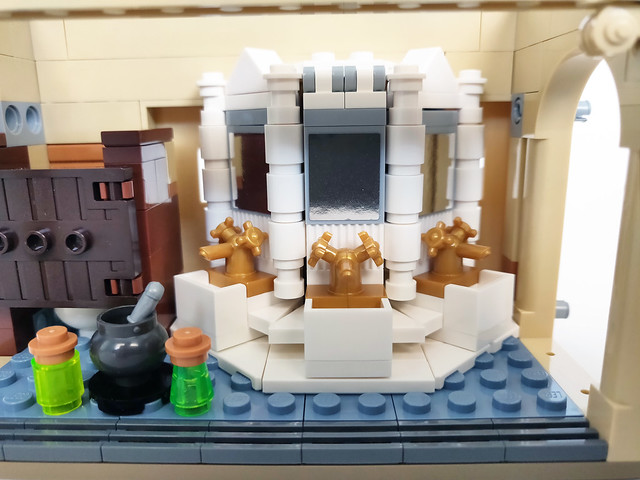 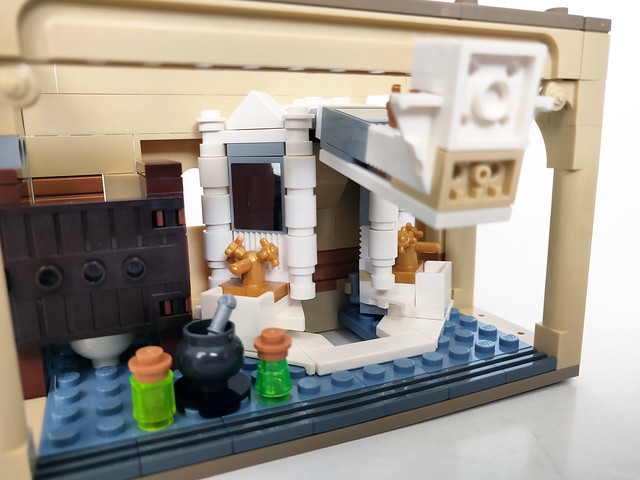 Of course you also have the cauldron to make the polyjuice potion as well as some vials of ingredients.

What’s nice about this year’s LEGO Harry Potter sets, the Hogwarts sections, including this one, are able to combined into a larger castle. There are Technic pin holes on either side to build and swap as you see fit but since this bathroom is on the second floor, there’s really no other place to put it. 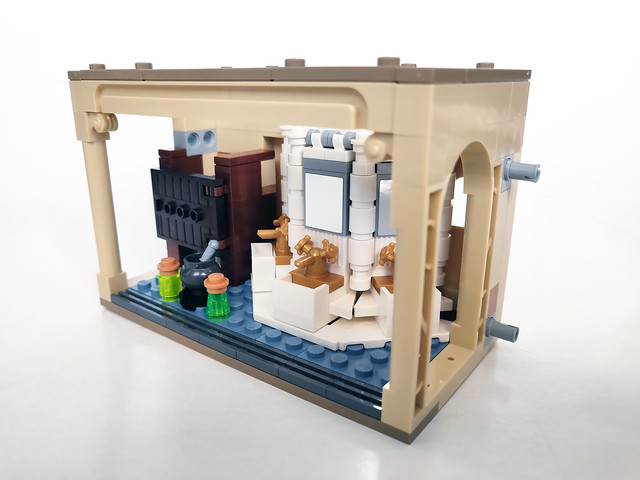 Overall, the LEGO Harry Potter Hogwarts Polyjuice Potion Mistake (76386) is a fun little set backed with a lot of details from the polyjuice scene from The Chamber of Secrets. Pretty much all the players in the scene are present except for Moaning Myrtle herself but the double up on Crabbe and Goyle is nice. 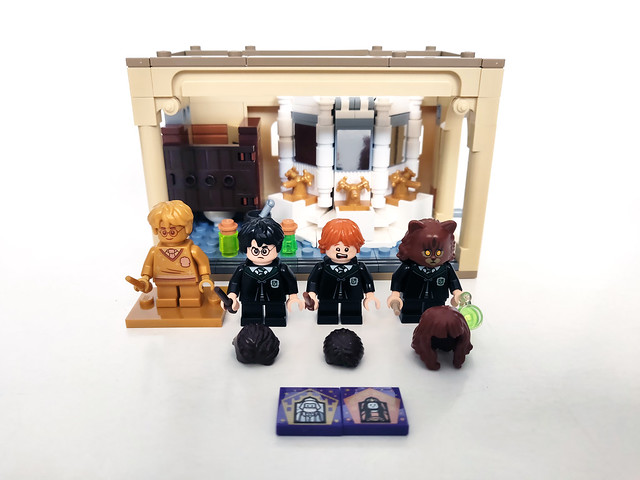