In my second review of the boxed LEGO Jurassic World sets, I have the Dilophosaurus Ambush (75916)

which contains 248 pieces and retails for $29.99. The contents of the box includes two numbered bags, the Dilophosaurus bagged in separate pieces, two instruction booklets, a sticker sheet, an two loose clear half sphere domes. Again, this review will contain some spoilers. 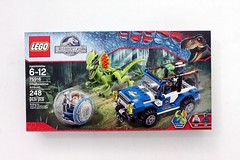 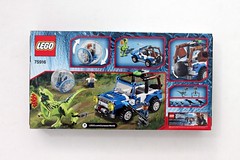 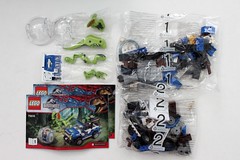 There are two minifigures included in the set: Gray Mitchell and an ACU trooper.

Played by Ty Simpkins, Gray is the nephew of Claire Dearing and the younger brother of Zach. Gray wears a red and blue striped plaid shirt with some blue pants. He has a double-sided head with a smile on one side and a scared expression on the other. His burnt orange hair is the same as Bilbo Baggins’ hair from the LEGO Lord of the Rings theme. On thing that I would’ve preferred is that Gray would have short legs instead of long legs. He isn’t an older character and he’s way shorter than his brother so it would make sense that he should have short legs. 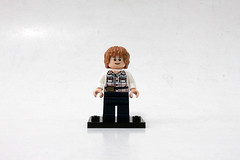 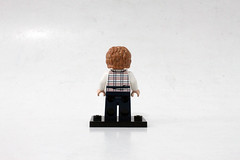 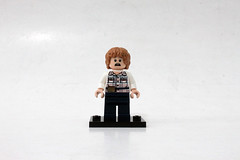 The other minifigure in the set is a generic ACU trooper that we’ve seen before. He has a dark blue torso with printing of a tactical belt suspenders on both sides. The legs are grey with more straps around the thighs. The accessories for the ACU are some binoculars and a wrench which are in the back of the jeep. 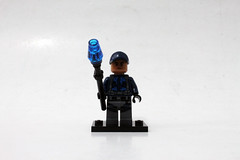 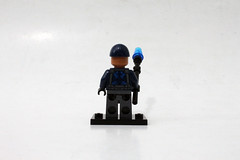 Now we’ve come to the dinosaur included in the set, the Dilophosaurus. Here’s where a spoiler from the movie comes in. The actual Dilophosaurus does not appear in the movie but a hologram of it was in the Samsung Innovation Center which was used to distract one of the Velociraptors. 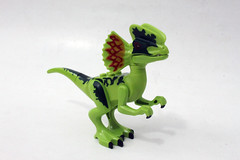 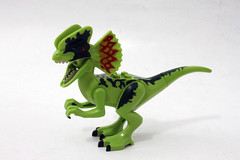 For the dinosaur itself in this set, it has a bright green color scheme with some darker green spots on the body, legs, and tail. The tail is made of a rubbery plastic so it is able to bend a little. The Dilophosaurus head is a brand new mold with the same bright green coloring. The top of the head has two crests and there are some frills towards the back. The mouth is able to open and close at the respective positions. 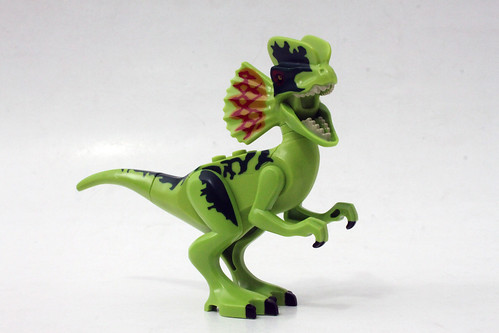 The first part of the build is the Gyrosphere that Gray uses while on the tour. Each half piece of the pod has a couple of TECHNIC axle holes that are used to keep it together. What’s neat about the Gyrosphere is that it is able to stay upright while being rolled unless you roll it on the studs which then it wouldn’t work that well. 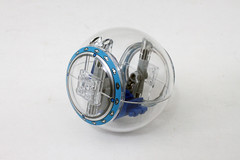 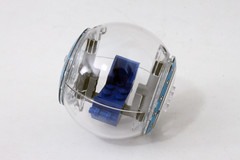 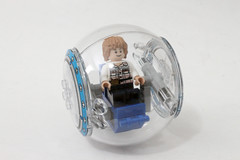 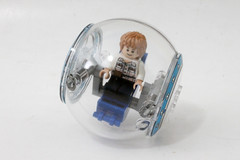 The other build in the set is what LEGO calls the classic 4×4. Another spoiler about this set is that this blue and white colored 4×4 jeep does not appear in the movie however the classic gray and red one does. The jeep does nicely remind me of the classic one see later on in the movie. On the front of the jeep is the winch. Around the vehicle are some stickers that gives the 4×4 some nice detailing. 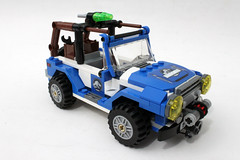 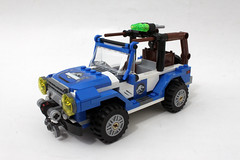 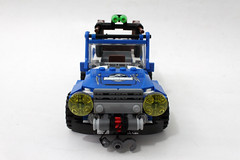 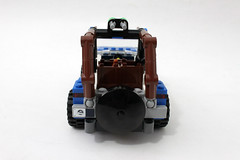 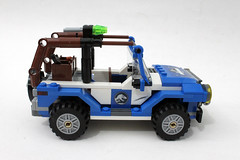 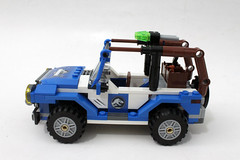 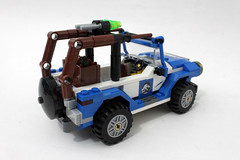 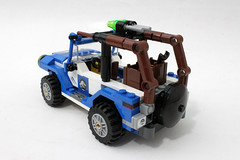 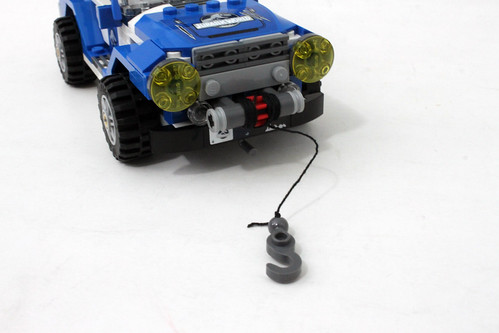 One of the new pieces that is used on the jeep is the blue crowbar used as windshield pillars. In the middle of the jeep is a neat rollcage made out of various TECHNIC pieces. On top of the rollcage are a couple of flick-fire missiles. 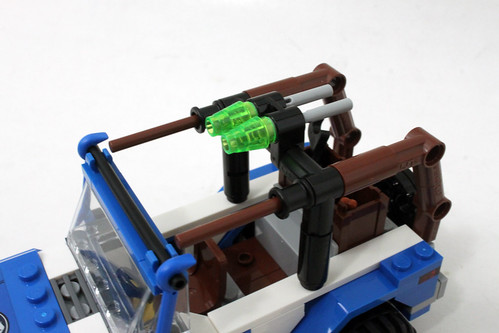 Towards the back, the spare tire cover is able to turn and when it does, it activates an “explode” function which knocks off the brown crates in the back. 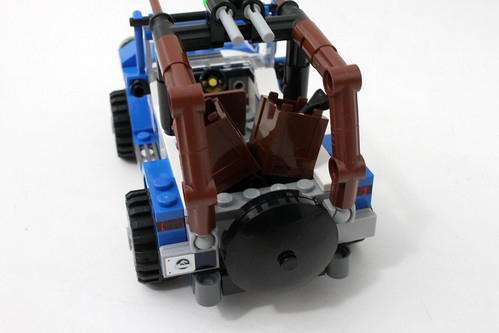 Despite the fact that we don’t see the blue and white 4×4 or the actual Dilophosaurus dinosaur in the Jurassic World movie, the Dilophosaurus Ambush (75916)

is actually a great set. We get a brand-new dinosaur with some very nice printing as well as the building instructions to create your own classic gray and red jeep, if you have the pieces. The minifigures themselves doesn’t add much to the set but Gray in the Gyrosphere at least gives some movie accuracy even with him having long legs instead of short ones. I do recommend picking this set up even at the $30 price point. 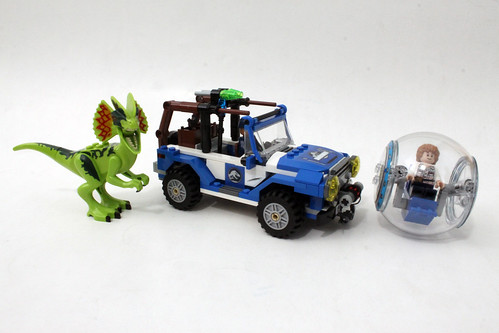