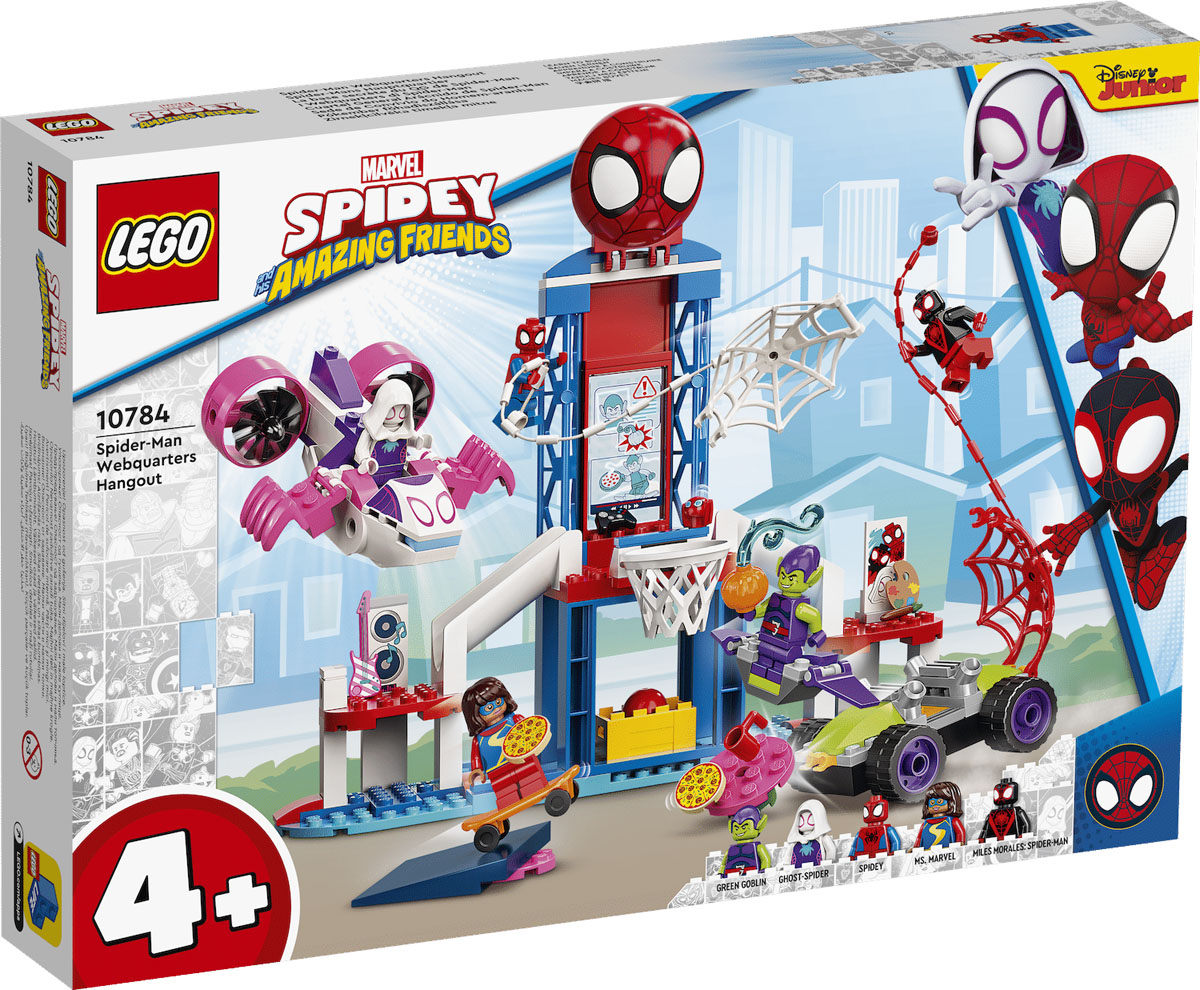 A few weeks ago, we got a first look at some of the upcoming LEGO Marvel 4+ Spidey and his Amazing Friends sets and there are now product details on the LEGO Shop. As of right now, they are confirmed to be releasing on January 1. 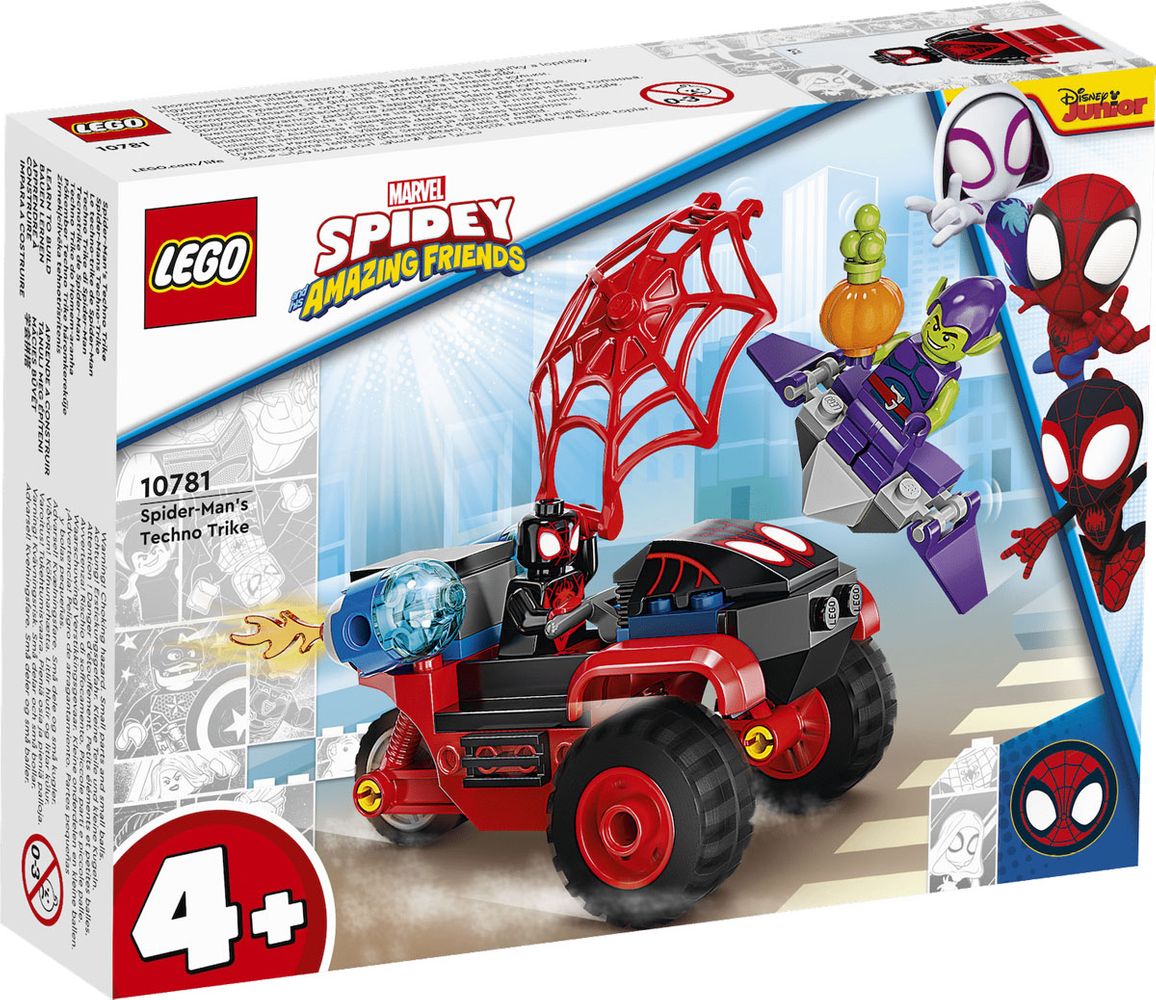 Simple builds for little Spidey fans
LEGO 4+ sets come with clever features to give boys and girls a fun play experience. The helpful Starter Brick provides a sturdy base for building, so kids get to the Super-Hero role-play fun fast.

Top fun for families
4+ sets are a fun way for adults to share the building fun with kids. Grown-ups new to LEGO building needn’t worry – this Super-Hero playset comes with picture instructions, which make the process easy even for children who are only just starting to read.

• Fun, anytime reward – Treat little Super Heroes aged 4 and up with the LEGO® Marvel Miles Morales: Spider-Man’s Techno Trike (10781) playset from the Disney+ Spidey And His Amazing Friends TV series
• Fun LEGO® Marvel gift idea for kids aged 4 and up – Creative impulse buildable toy treat for little Super Heroes who love all things Spider-Man
• Lots in the box – Includes a trike and glider with movable wings, plus 2 LEGO® Marvel minifigures. Green Goblin has a changeable head with differentexpressions
• Save-the-day playset – Kids can propel Spider-Man’s crime-fighting partner Miles Morales on his trike to chase Green Goblin’s glider and bring it down by catching him in a red web
• Fast fun – The set comes with a Starter Brick for quick building, so kids can jump straight into the action play 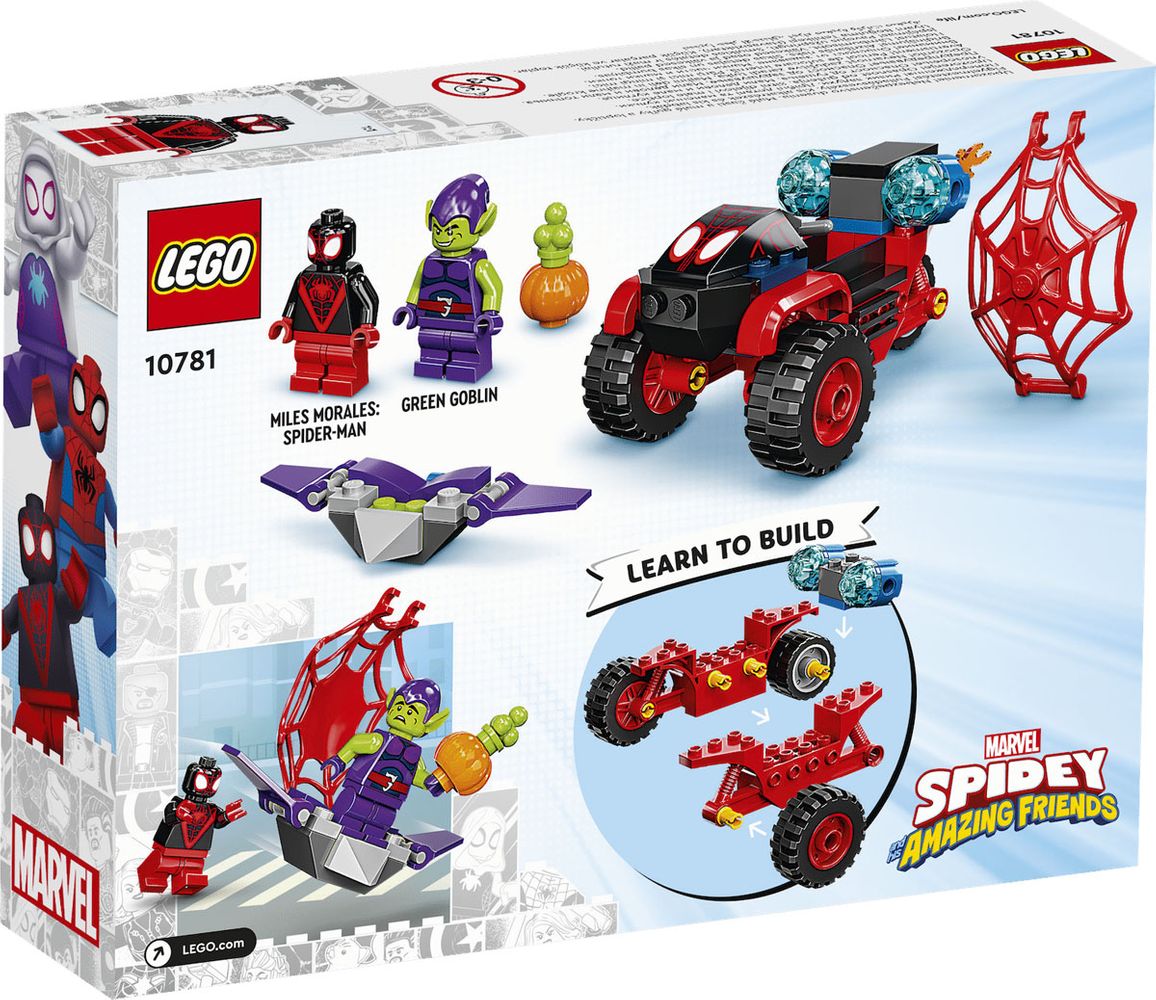 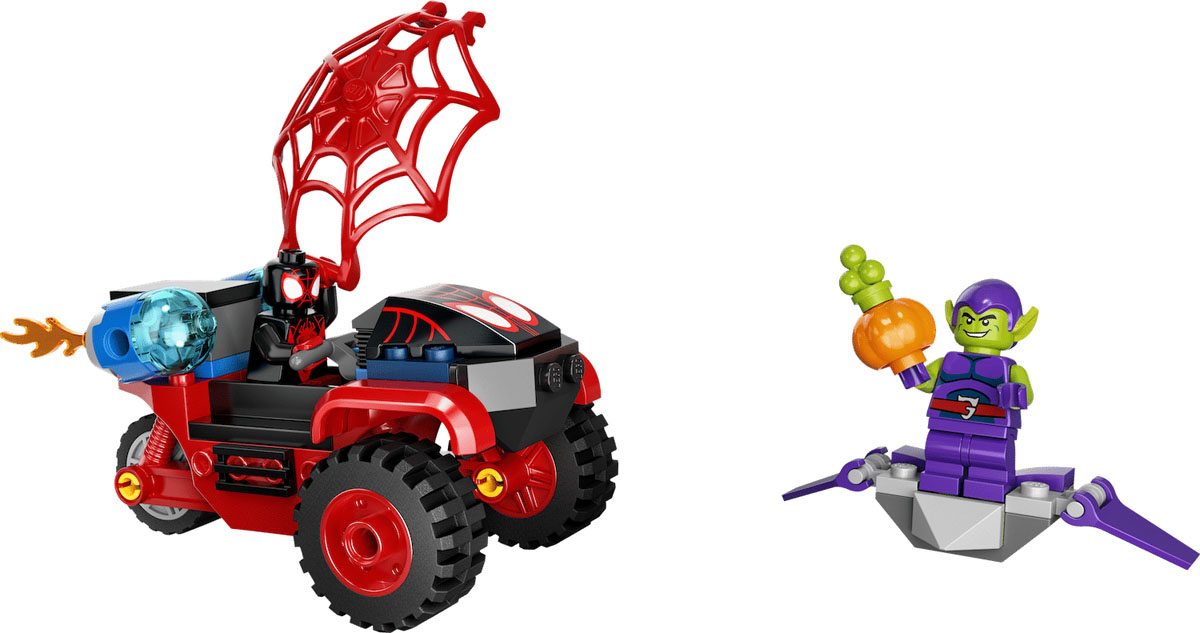 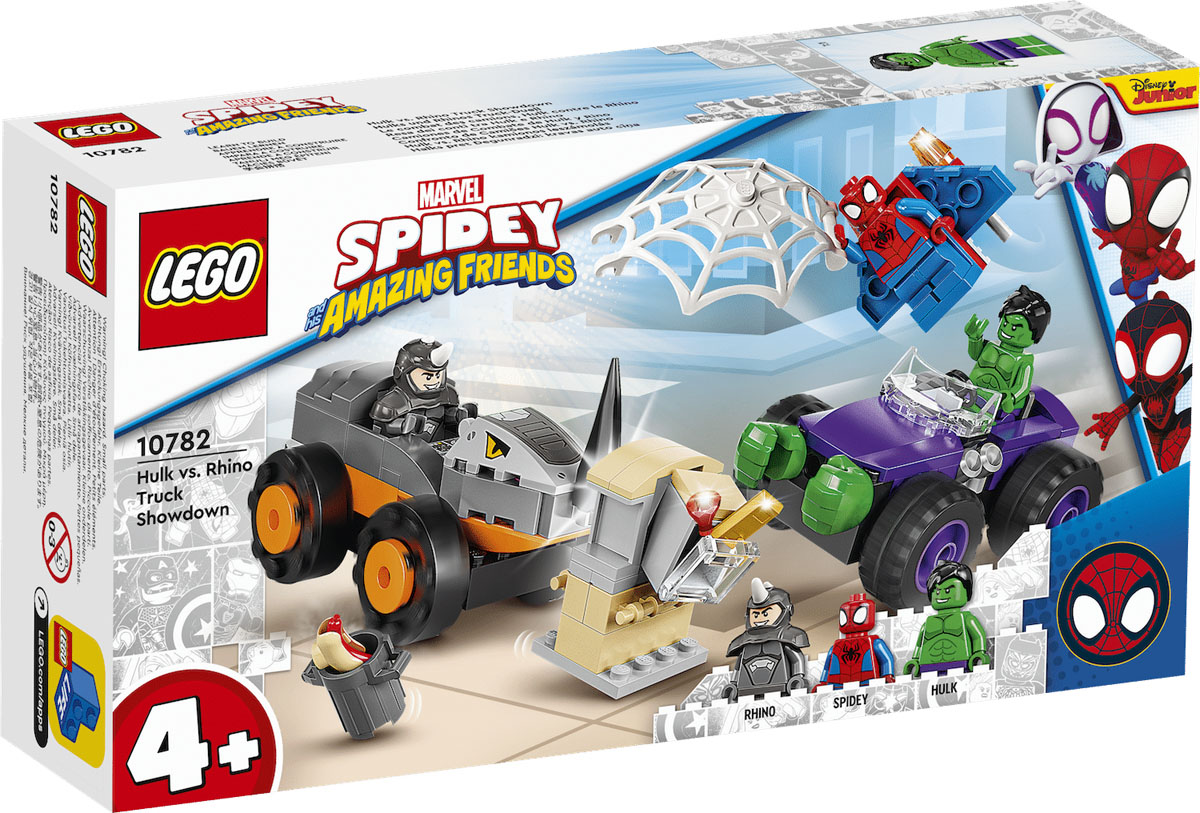 The LEGO® Marvel Spidey And His Amazing Friends Hulk vs. Rhino Truck Showdown (10782) building toy puts Super Heroes aged 4 and up in the driving seat as they race to save the day. Kids recreate scenes inspired by the popular Disney+ TV series as they help Spidey and the Hulk thwart Rhino’s bank heist. Kids will love the battle wagons in this collectible, buildable toy set. Each monster vehicle features cool details – Rhino’s truck has a ramming horn, while Hulk’s has a pair of massive fists ready for smashing combat.

Make building a breeze
4+ playsets get kids building fast. This one comes with 2 truck bases, so kids get to the play quickly. They don’t even have to complete the whole build before the play begins because each bag of bricks contains a model and a character. Simple picture guides make building easy, even for kids who aren’t yet reading. Grown-ups can also join in the fun, passing on their construction know-how to help little Spider-Man fans become master builders.

• Marvel action for little Super Heroes – Let kids aged 4 and up who love quirky vehicles team up with Spidey and LEGO® Marvel Hulk to recreate scenes from the latest Disney+ Marvel TV series
• Gift for kids who love vehicles – LEGO® Marvel Spidey And His Amazing Friends Hulk vs. Rhino Truck Showdown (10782) comes with 2 LEGO vehicles, 3 minifigures, a Spider-Man jet pack and a bank vault
• Spidey and Hulk stop Rhino in his tracks – Kids and grown-ups will love the smashing action as the two monster cars clash and Spidey flies in to trap Rhino in his web and save the day
• Birthday gift for preschool kids – This LEGO® Marvel gift comes with a Starter Brick and simple building guide so youngsters aged 4 and up can learn to build and develop creative confidence
• Feature packed – The buildable Hulk toy has 2 changeable heads with different expressions, Spider-Man’s jet pack fires missiles, and the vault has a removable box that fits into Rhino’s truck’s trunk 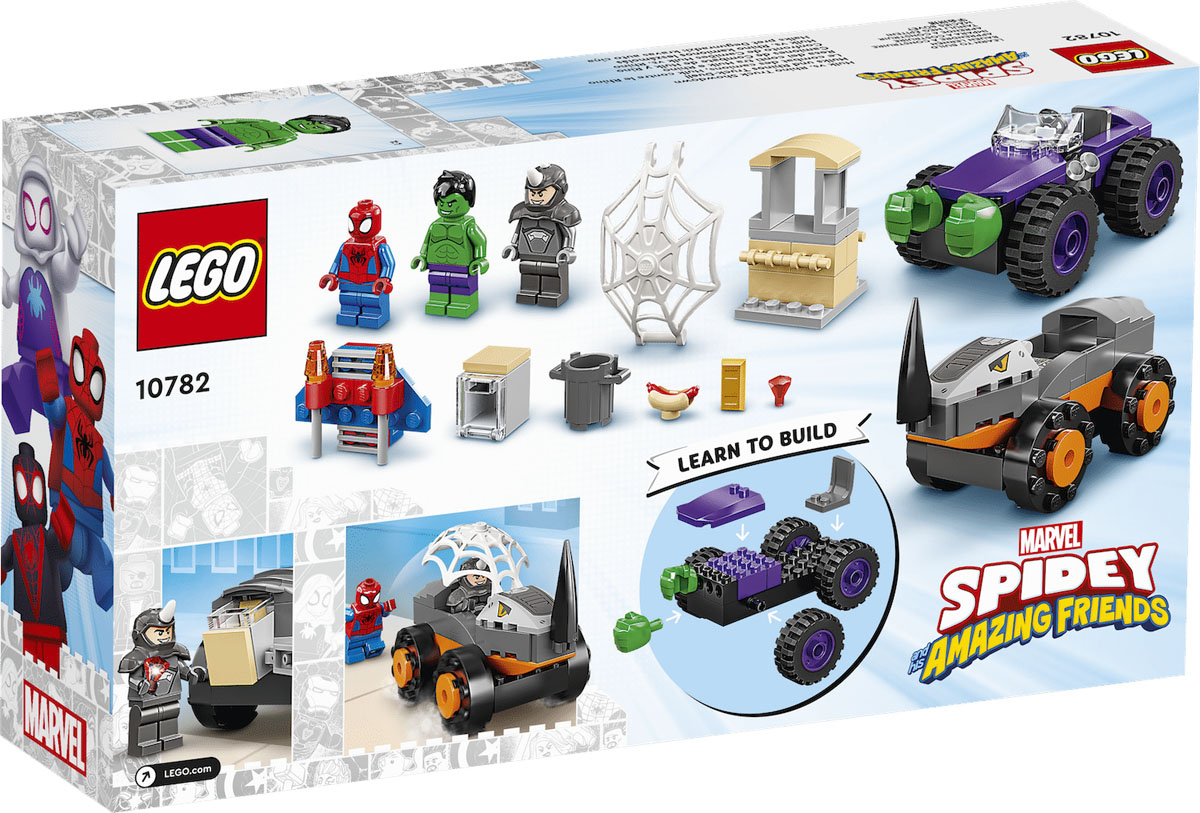 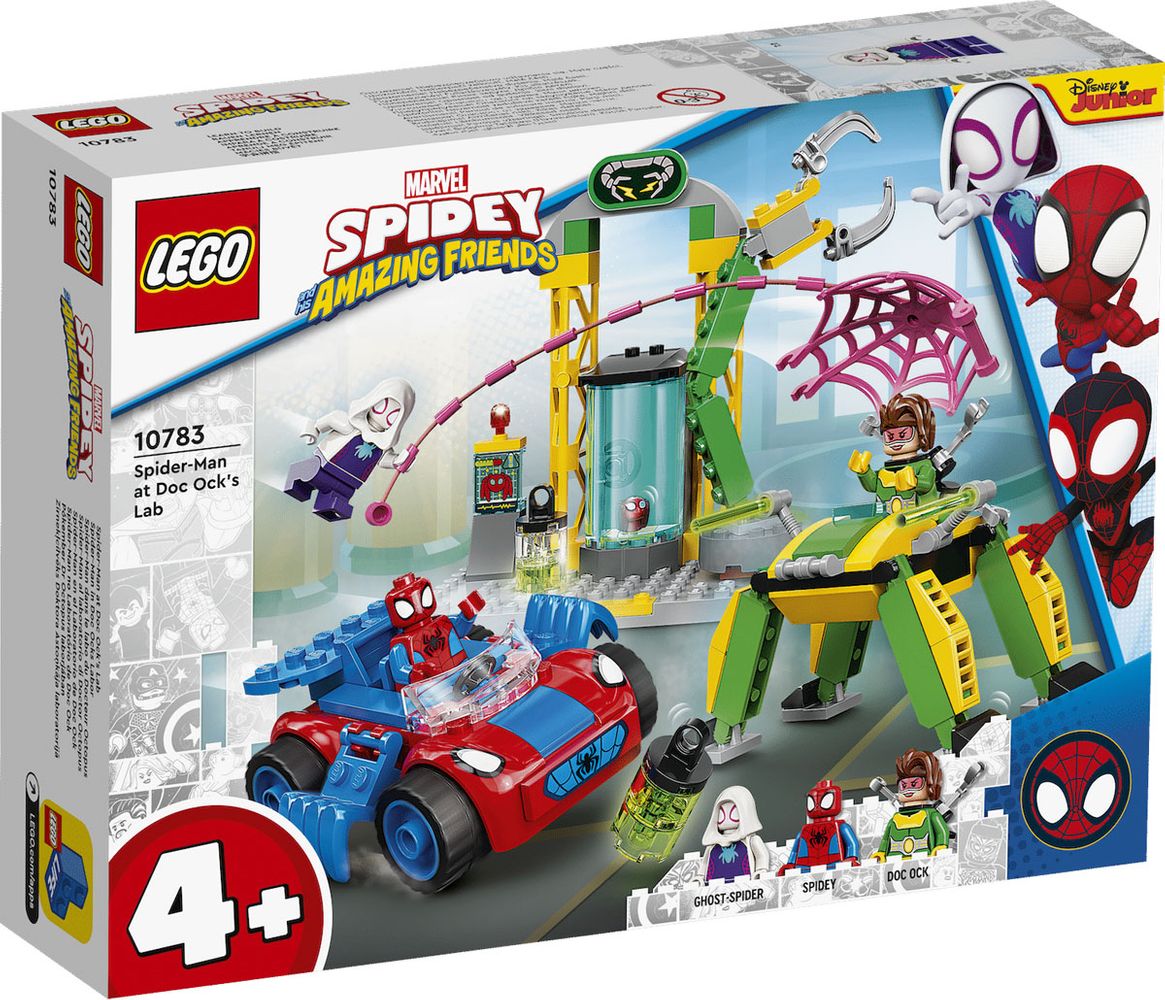 Know a little web-slinger who’s mad about Spider-Man? Make their day with LEGO® Marvel Spidey And His Amazing Friends Spider-Man at Doc Ock’s Lab (10783) building toy, inspired by the latest Marvel Studios’ Spider-Man TV show. This feature-packed playset comes with a Spider-Man car, Doc Ock lab scene and mech, plus 3 minifigures. Kids aged 4 and up can act out their own exciting rescue scenes as they battle Doc Ock to save Spidey’s robot spider pal.

Building made simple
Amid all the action fun, this LEGO 4+ set also helps little Super Heroes learn to build. 4+ sets come with a simple base to speed up construction. Each bag of bricks contains a character and a model so kids can start the Super-Hero play at any point. 4+ sets are also a fun way for adults to share the fun with youngsters. But if grown-ups are also new to LEGO building, kids can take control, since these LEGO Marvel gifts come with simple picture instructions that are perfect for children who can’t yet read.

• Action fun for kids aged 4 and up – Delight little Spider-Man fans with this battle between Spidey and Doc Ock, inspired by the latest Disney+ Spider-Man TV show
• Packed with play starters – LEGO® Marvel Spidey And His Amazing Friends Spider-Man at Doc Ock’s Lab (10783) comes with 3 minifigures, a robot spider, lab scene, buildable truck toy and an action mech
• Save-the-day play – Kids join forces with Spider-Man and Ghost-Spider as they race to rescue Trace-E from evil Doc Ock’s lab, which includes a prison cell and robot for catching Super Heroes
• LEGO® Marvel gift for preschoolers – Give this as a gift for kids aged 4 and up who love the latest Super-Hero construction toys, Spider-Man minifigures and beefy, buildable truck toys
• Dynamic play – Minifigures can climb the scaffold to launch a web attack, while the robotic arm grabs Doc Ock’s energy canisters or an unsuspecting web-slinger 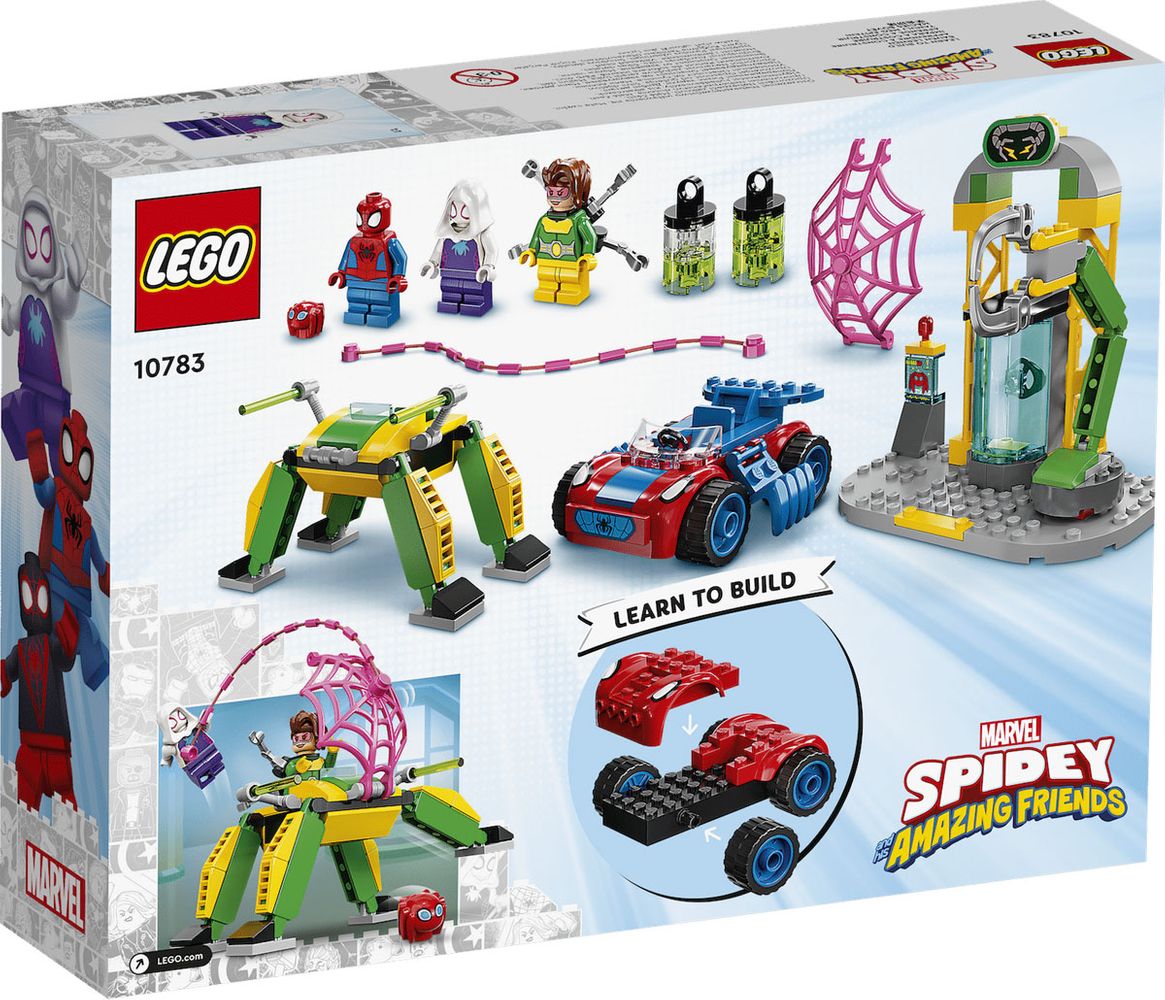 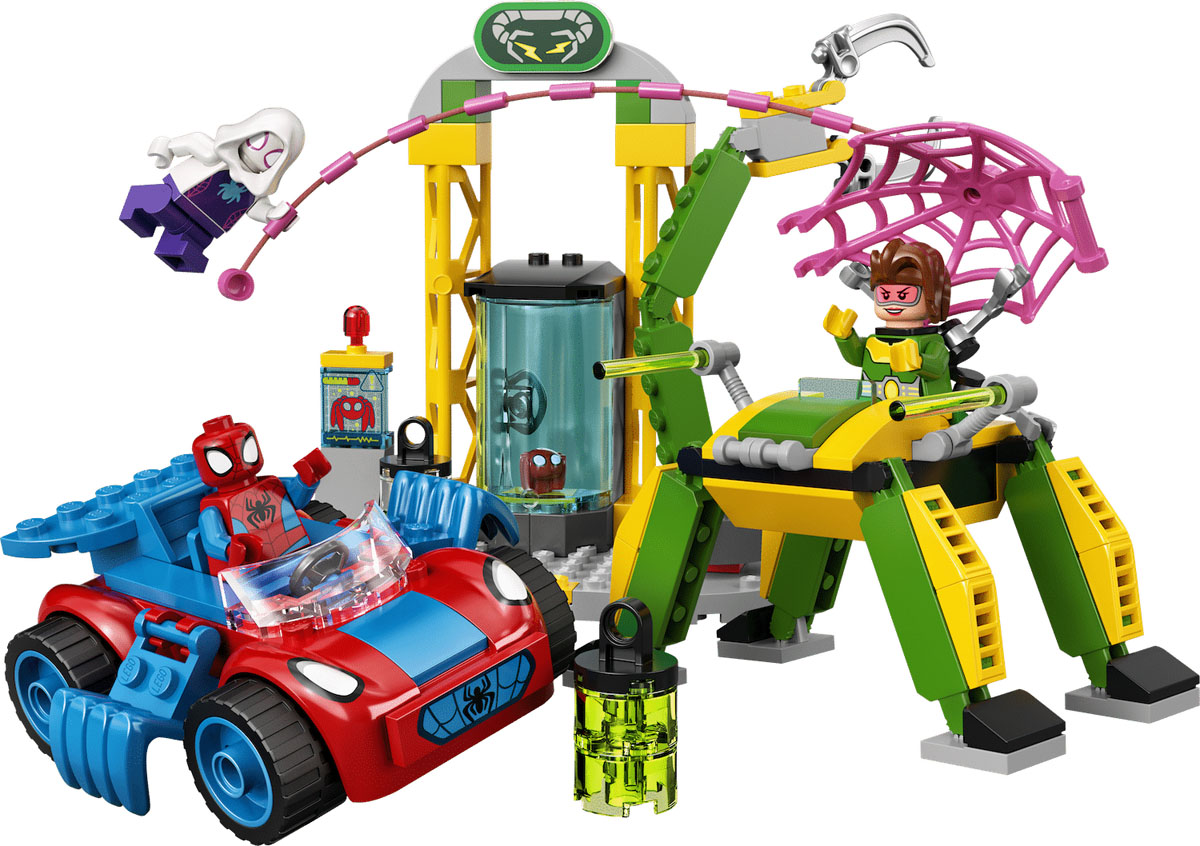 Even web slingers need to unwind! Help little builders aged 4 and up make the ultimate hangout HQ with the LEGO® Marvel Spidey And His Amazing Friends Spider-Man Webquarters Hangout (10784) construction toy. Kids can swoop in on the Ghost Copter and join the gang shooting hoops, skateboarding, gaming, dancing and making art. When Green Goblin crashes the party, Spider-Man can catch him in a web. This collectible building toy brings to life the fun camaraderie of the Disney+ TV show and will delight little Super Heroes who love LEGO Marvel gifts and minifigures.

Building confidence
LEGO 4+ models come with Starter Bricks, which provide a sturdy base to start from. For kids who can’t wait to play, each bag of bricks in this cool building toy contains a character and a model so there’s no need to complete the whole build in one go. LEGO 4+ sets are a fun way for adults and kids to have fun together, while simple picture instructions mean anyone of any age can become a master builder in no time.

• Super-Hero hangout for kids aged 4+ – Delight kids, and their friends, with Spider-Man Webquarters Hangout (10784), the place web-slingers unwind after a hard day’s crime-fighting
• A star cast of Super Heroes – Comes with Spider-Man, Ghost-Spider, Miles Morales, Ms. Marvel, and super villain Green Goblin minifigures, plus Trace-E, the Ghost Copter and a 2-in1 Goblin car
• Spider-Man set for creative play – Kids can shoot hoops with Spider-Man, dance with Ghost-Spider, make art with Miles Morales, play video games with Ms. Marvel, or trap Goblin in a buildable web
• Details bring the play to life – Creative accessories, such as a pumpkin trick, pizza, guitar, 2 webs with strings, brush paint, palette and ball spark hours of endless fun
• Gift for creative kids aged 4 and up – Fun Super-Hero gift for kids who love the Disney+ TV show, Spidey and His Amazing Friends
• A build to be proud of – The HQ measures over 8.5 in. (22 cm) high and 10 in. (25 cm) wide, making a colorful display that will impress friends who come round to join in the Super-Hero play 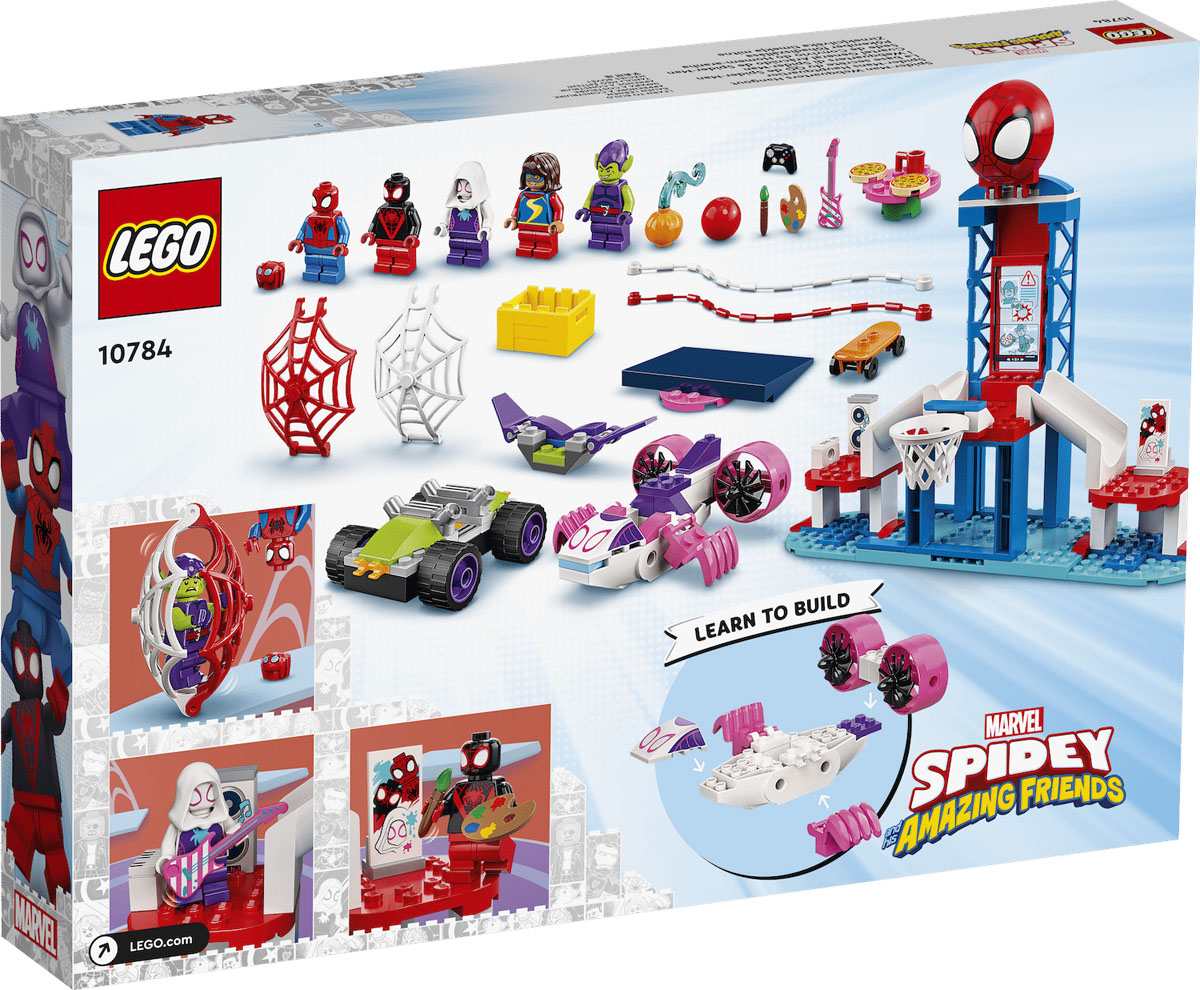 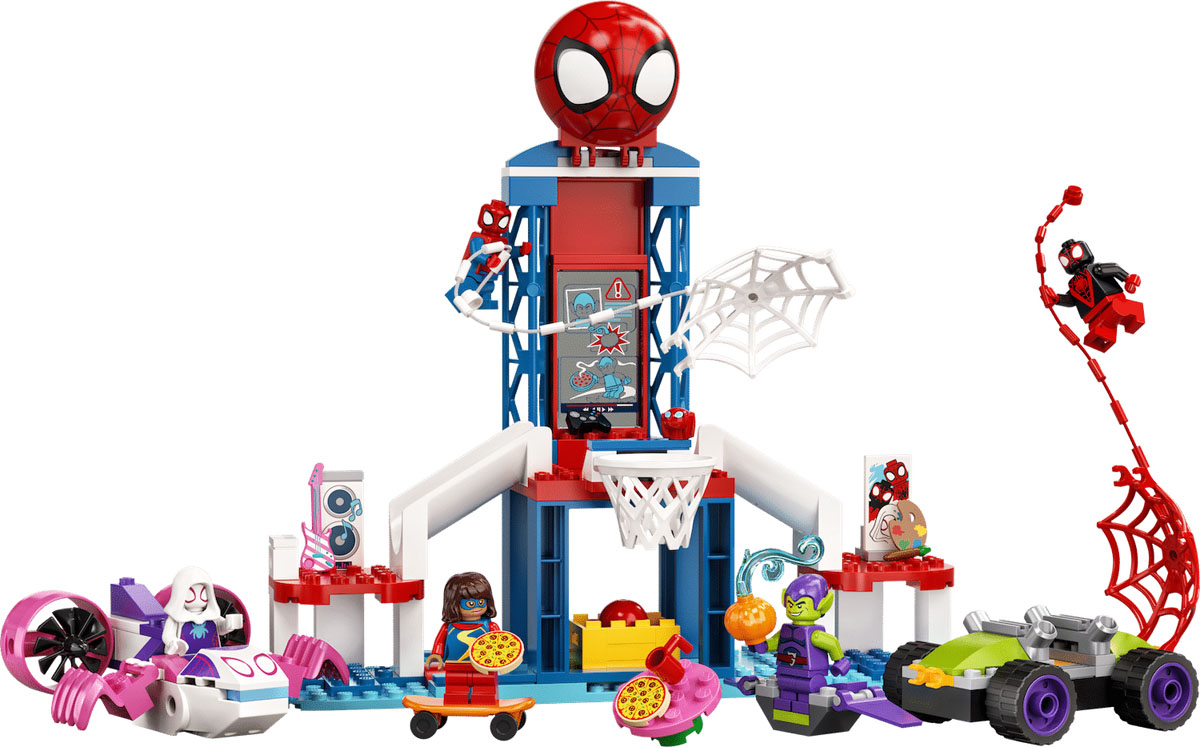