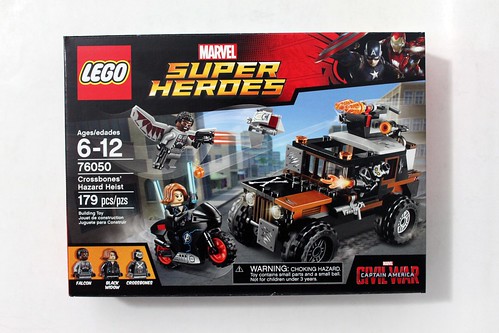 It’s been a few weeks since Captain America: Civil War has been released so I think it’s about time to do some reviews on the LEGO Marvel Super Heores sets based on the movie. The first set is the Crossbones’ Hazard Heist (76050). It consists of 179 pieces and retails for $19.99. The contents of the box include two numbered bags, the instructions, a sticker sheet, and a comic. Warning, there will be spoilers in these reviews so if you haven’t watched the movie yet, I would avoid reading any further. 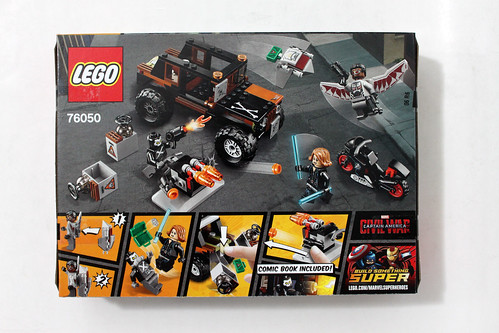 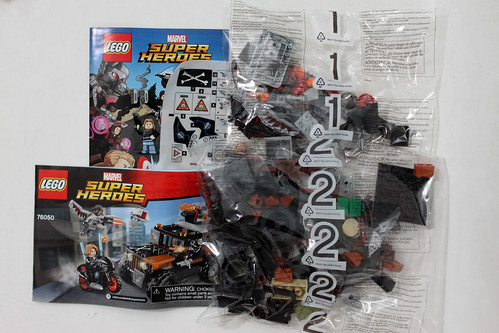 There are three minifigures in this set: Falcon, Black Widow, and Crossbones.

Falcon looks pretty accurate to the outfit that he wears. The torso is very detailed on both sides. The legs, however, are just plain gray legs which is a little disappointing. Falcon has a double-sided head with him having printing for his red goggles and goatee. He also has his EXO-7 Falcon winged jet pack which has a nice shape and resembles the one in the film well. Attached to the wings is the brick-built Redwing drone but it doesn’t translate well. His accessories include two pistols which are his Steyr SPPs. 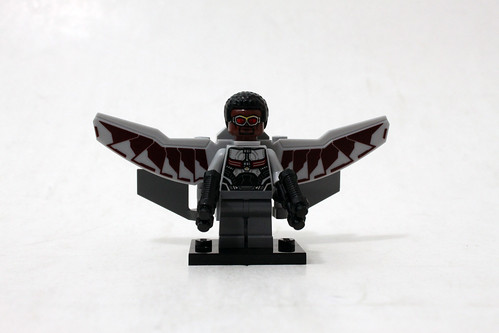 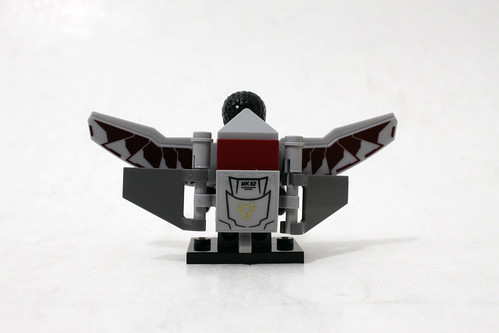 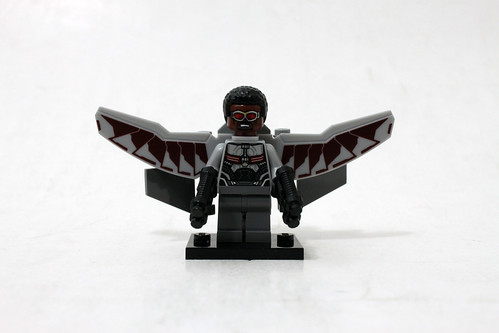 Black Widow is the same minifigure that was in one of the previous Age of Ultron sets. She does have a slightly updated outfit uniform in Civil War where there is no blue piping so I’m not sure why LEGO didn’t update her in this set. Her accessories include two trans-light blue 4L bars as her electrshock batons. 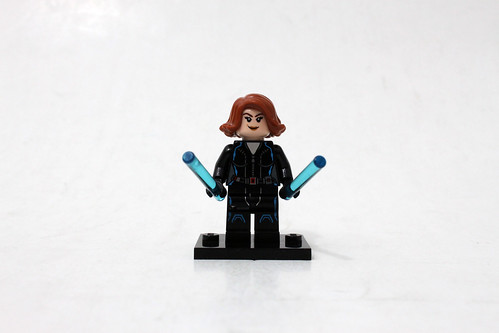 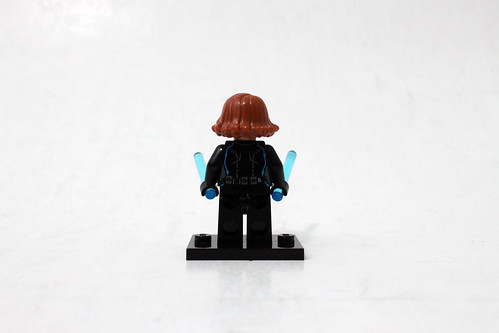 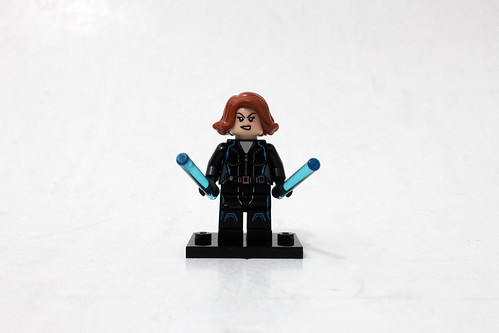 Finally we have Crossbones who appeared in the first scene of the movie. The torso looks well done with armor printing on both sides. Again the legs are bland and I would have preferred black instead. The head is okay but the yellow eyes are not accurate as there are only holes in the mask for his real eyes. Crossbones’ accessories include a breathing apparatus to represent the gas mask he wears. Also included is a flamethrower and a rifle which are nice additions. 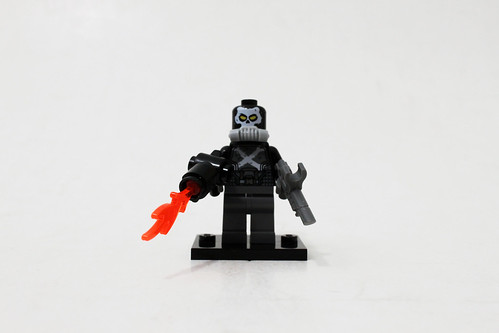 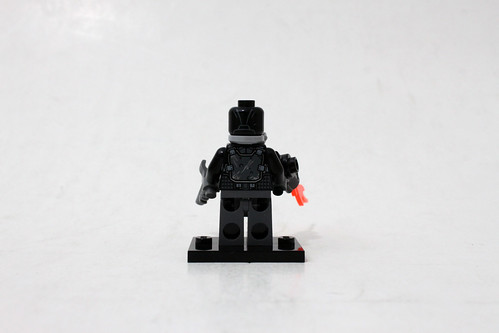 There are two parts to the build in this set: Black Widow’s motorcycle and Crossbones’ truck.

The motorcycle is pretty simple as it only consists of the fairing and the frame. There are a couple of stickers on each side to give it some details. On the back is a clip for one of the batons so Widow has to hold on to the other one since there is no other storage options for it. 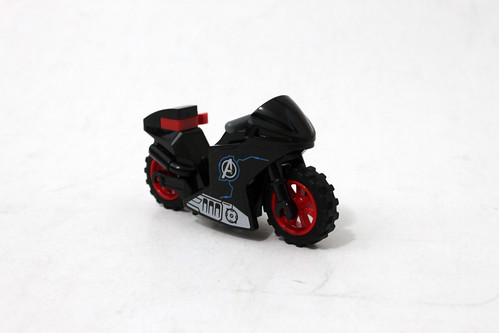 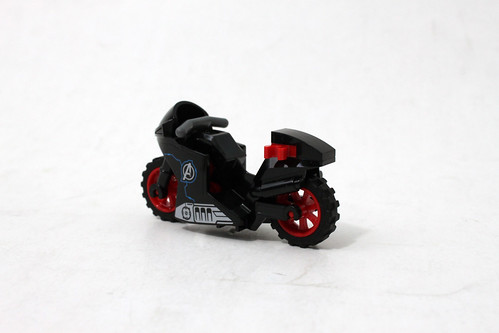 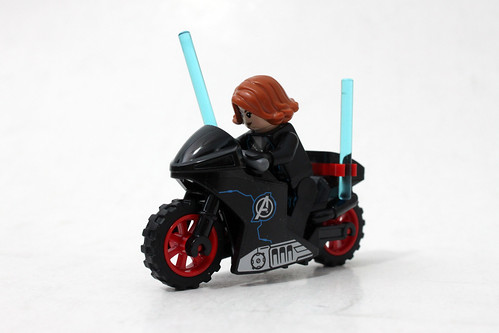 For Crossbones’ truck, it looks more like a jeep than an armored truck and is not totally accurate. The main colors are black and dark orange with some reddish brown. The orange and brown are used to give it some of the rusty look that the truck has. The windshield area is horrible looking as the fence piece is just weird. The use of two trans-clear window would have looked more accurate. 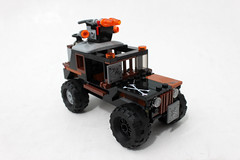 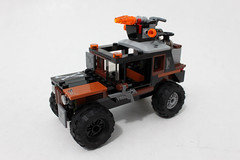 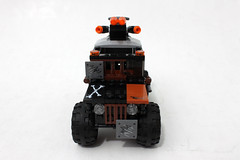 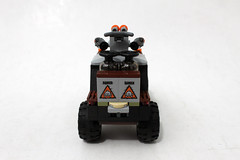 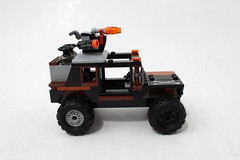 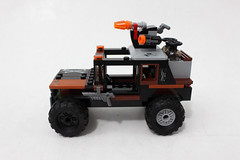 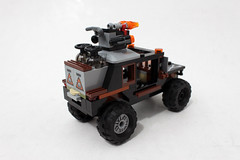 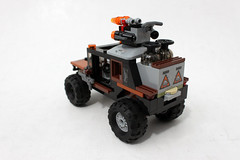 There are plenty of stickers throughout to give it more detail but they are unnecessary especially the crossbones design however I do like the ones with the scratches. The roof has a couple of stud shooters and can be removed and put on the floor to be used by Crossbones. The back of the truck has a couple of storage containers which holds a suitcase that contains the stolen biological agent. The play feature here is to push down on the tab to send the containers flying. 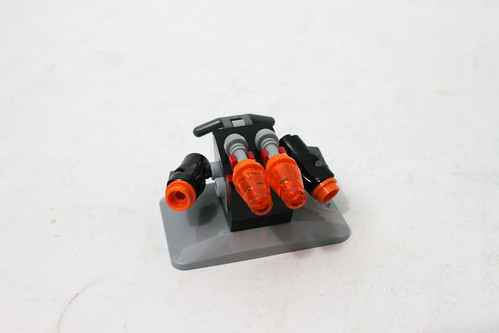 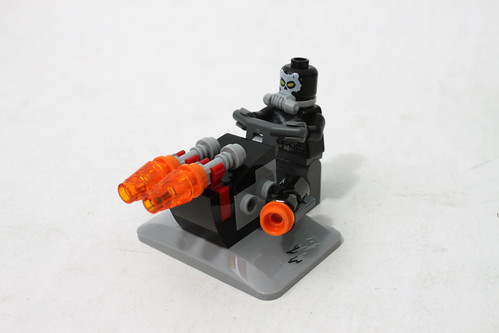 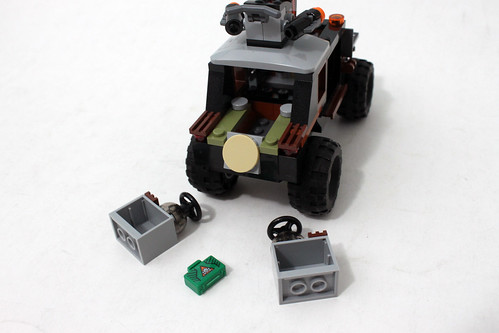 Overall, I have very mixed feelings with the LEGO Marvel Super Heroes Crossbones’ Hazard Heist (76050). The minifigure selection is decent. I do like the look of Falcon and Crossbones isn’t too spectacular but passable. Black Widow was a disappointment simple because she’s the same one that we got last year.

If you’ve seen the movie, the builds are somewhat inaccurate but that is sometimes the trend with movie based sets. The motorcycle is a good addition and the truck is okay if you’re looking for a fairly small set. 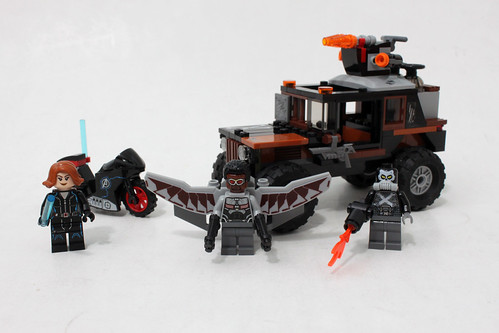