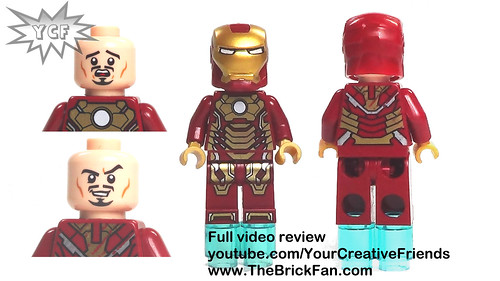 In the past couple of days, we, along with YourCreativeFriends, reported there were new images of what appears to be new Iron Man minifigures from the 2013 LEGO Marvel Super Heroes sets. Now, YCF has gotten their hands on a couple of these minifigures and has done a early review of them.

For the Mark XLII suit, the helmet is the only only thing that’s the same as in the 2012 suits. The torso itself is mostly red but has gold printing for most of the front and about half in the back. The hands are also gold instead of red. The arc reactor is printed white. The front of the legs also has some of the gold printing. There is also some toe printing for the boots. What’s new about this version of Iron Man is his face printing. He has a confident expression on one side and a scared/worried expression on the other. Again, we believe the Mark XLII will be in the Malibu Mansion Attact (76006). 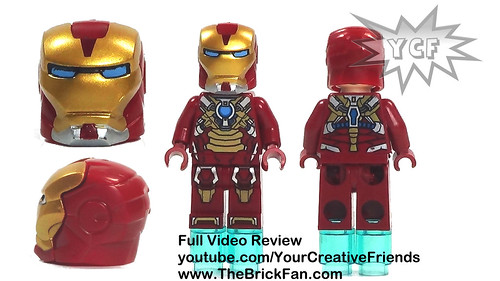 From the closeups of these minifigures, will you be picking up the Iron Man sets of 2013? YourCreativeFriends are also doing a giveaway for one (1) of the the new LEGO Marvel Super Heroes Iron Man sets. First, you have to subscribe to YourCreativeFriends‘ YouTube channel. Secondly, you have to correctly name the two suits that were reviewed in the video and when the sets are released in a couple of months, YCF will choose a viewer who named both of the suits in the comments section. The winner will be sent one of the sets but you won’t know which one. It could be the largest set or it could be one of the smaller ones. Check out YCF’s video below for their impressions on the minifigures and be sure to subscribe for your chance to enter the contest.