If you’ve been wondering why we haven’t done any LEGO reviews, it’s because we have been busy moving to our new home. This will be our very first review in our new location. We are sorry about the lateness but we still hope you enjoy reading this. We have better lighting here so we’re looking forward to seeing how our images come out.

Today, we bring you the smallest of the new LEGO Marvel Super Heroes Iron Man 3 sets, the Iron Man vs. The Mandarin: Ultimate Showdown (76008). This set contains only 91 pieces and retails for $12.99, coming in at around $0.14/piece. The box has two unnumbered bags, one instruction booklet, a comic book, and a loose flex hose piece. 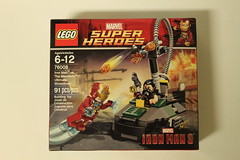 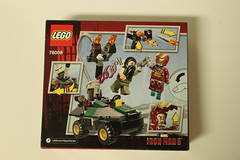 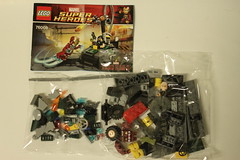 There are only two minifigures in this set, Iron Man in his Heartbreaker armor and Mandarin.

The new Mark 17 – Heartbreaker armor has the most colors of any of the LEGO Iron Man armors. In addition to the usual red and gold colors, the new suit also contains some silver printing on the torso as well as on the legs. The arc reactor in the middle is blue instead of the usual white. The helmet has the same mold as the previous helmets but there’s some new coloring on it. This version has some silver printing on the chin and the eyes are the same blue as the arc reactor. Like the other Iron Man minifigs, he has some blue transparent studs and round bricks to represent the thruster flames. 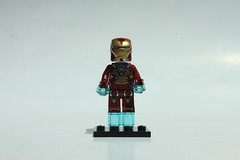 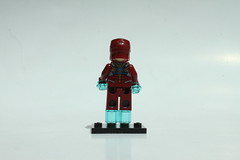 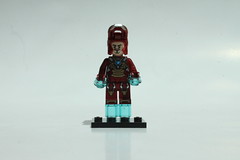 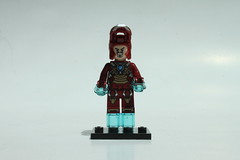 The other minifigure in the set is Mandarin. In this robeless version, he wears a dark green vest over a green shirt and a green and yellow scarf. He also wears a black belt with bullets going around the torso. The Mandarin has a double-sided head with a serious look on one side and an angry look on the other. His hair and beard piece doesn’t have the feel of the Mandarin but of the dwarves from the Hobbit. His accessory is a standard blaster gun. 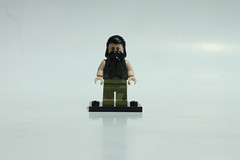 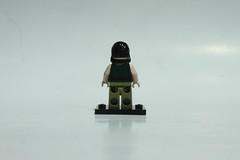 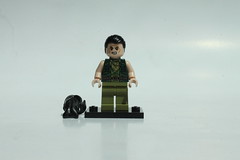 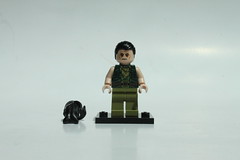 The only “build” in this set is the Mandarin’s armored vehicle. The body shape has that typical armored car look that is pulled off nicely by LEGO but this one even has a flamethrower on top. Next to the flame are your customary flick-fire missiles. This whole section sits on top of a turntable piece. The left side of the vehicle has a spot to hold Mandarin’s gun. When Mandarin sits in the cockpit, his arms are left hanging because of the green cheese slope pieces on the sides. There’s pretty much nothing else left to say about it. I’ll give my take on it in the results below. 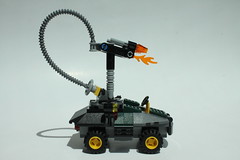 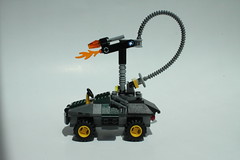 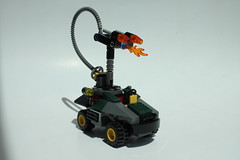 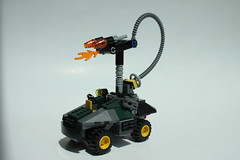 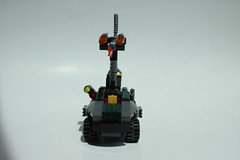 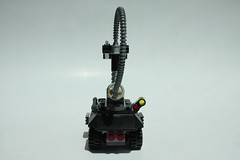 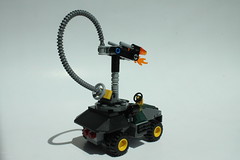 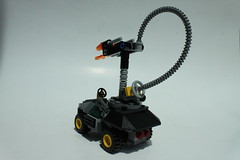 Overall, I feel that this set is a little underwhelming. Yes, we do get the two exclusive minifigures but the build leaves much to be desired. It was probably included because a similar looking vehicle might be showing up in the Iron Man 3 movie. Again, the main draw of the set are the minifigures themselves. At $12.99, you may or may not want to pick up this set but you do need the Heartbreaker minifigure to complete your Hall of Armor. I like the set but it could’ve been done better. 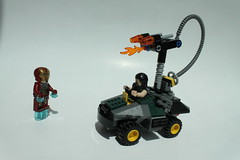 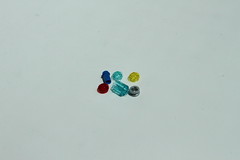