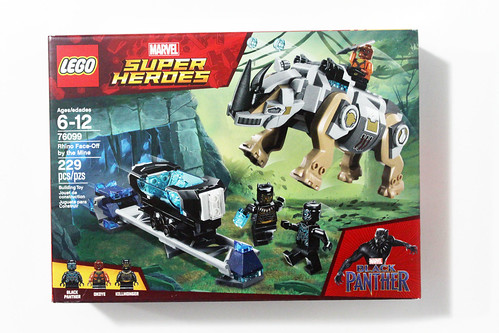 Black Panther hits theaters in just a month and as not surprisingly, LEGO has released a couple of sets to accompany the film. The smaller of the two sets is the Rhino Face-Off by the Mine (76099) which consists of 229 pieces and retailing for $19.99. There are some cool parts that are in this set and we’ll take a look at them a bit later. 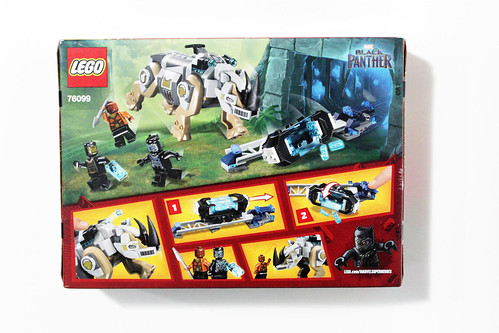 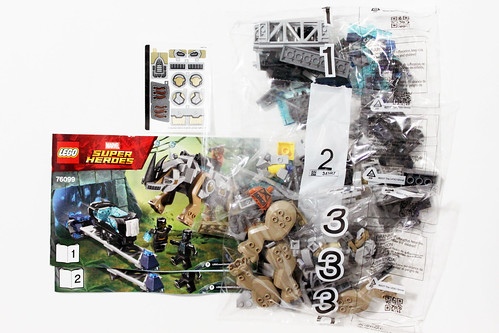 There are three minifigures that are in this set, Black Panther, Okoye, and Erik Killmonger. Black Panther has a brand new suit in this movie and the torso has a lot of metallic blue printing on it. It is more apparent when you look at it up close as it appears to look metallic silver when you see it from afar. I do like that effect a lot on it which is on both sides of the torso. The legs, however, are plain black. I wish there was some printing of his boots because the minifigure looks imcomplete without it. The head also has some more of the metallic blue printing on both sides. He also has the ear piece that goes on top of the head. 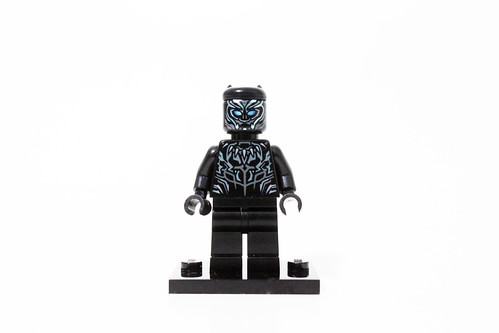 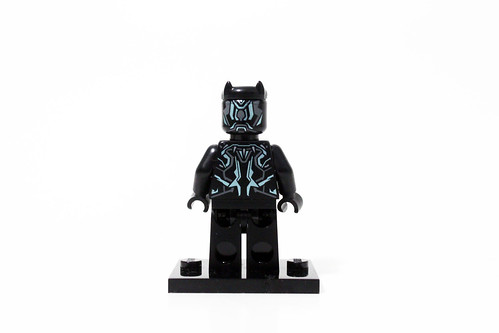 Next up is Black Panther’s Dore Milaje bodyguard Okoye. She has a dark orange shirt with some brown leather straps on the front and back of the torso. There’s also some gold for her necklace and the panther insignia. Like with Black Panther, her legs are plain black. Her head is new with her determined facial expression. Her accessory is a gray spear. 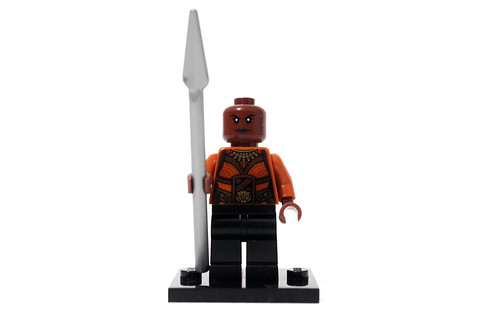 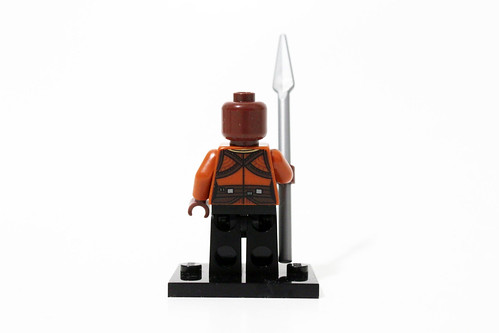 The last minifigure in the set is Erik Killmonger in the Golden Jaguar suit. Like with Black Panther’s suit, it is mostly black but his suit has metallic gold on both sides of the torso instead of blue. There’s also printing of the necklace that is on the front of the torso. Like with the other minifigures in this set, the legs are plain black. The head looks more menacing than Black Panther and it also has the ears that go on top of the head. 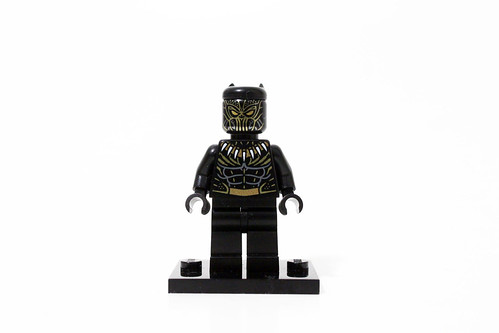 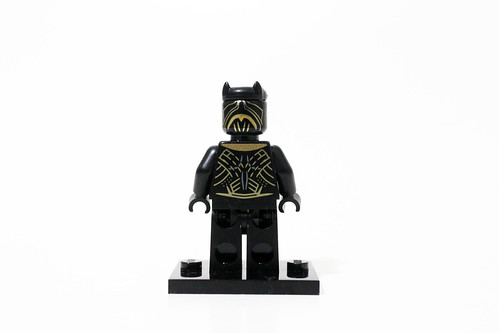 There are two parts of the build in this set. The first one is the Vibranium mine and the mine cart. The mine is pretty small that is filled with trans-blue cheese slopes. The Vibranium is actually the 1×2 trans-light blue plates. There’s a lever at the end to flip the mining cart off the tracks. Speaking of the tracks, there are a couple of the new straight light gray tracks that are in this set. 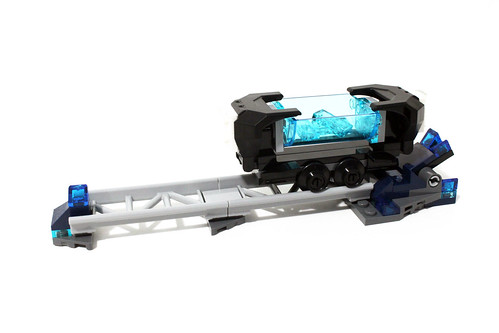 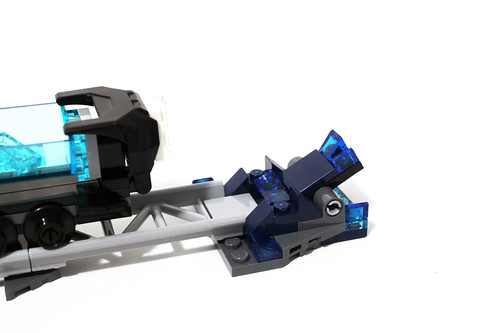 The mining cart is a simple but futuristic looking. It uses a trans-light blue half cylinder piece to hold the Vibranium. There are a couple of LEGO Nexo Knights Battle Suit armor pieces on the ends to hold the container in place. I feel the wheels are awkwardly close togther. I think moving them one stud apart would make it look a bit better. 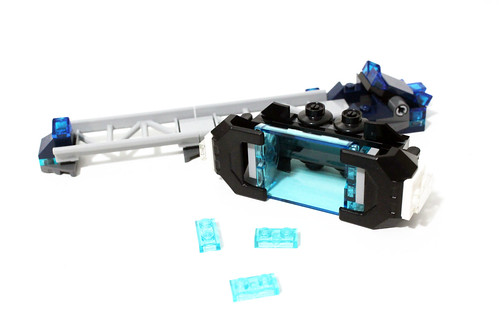 The main part of the build is the rhino itself. I’ve watched all three trailers for Black Panther and I didn’t see any mechanical rhinos in it. I’m not sure if Marvel is saving it as a secret for when the film is shown or if LEGO had creative liberty for a set. 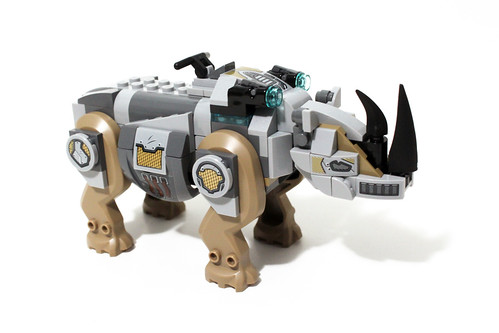 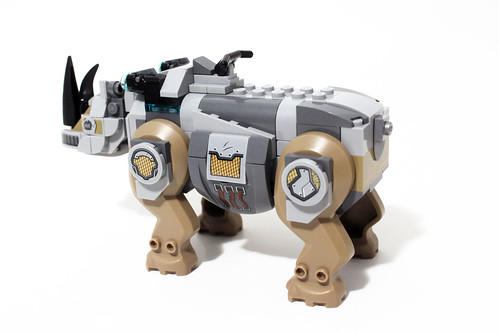 Either way, the model looks great for a brick-built rhino which we haven’t had before in previous LEGO sets. The main color scheme is light gray with some dark gray and dark tan for the legs. It is actually pretty big and it seems like it is the size of an elephant compared to a minifigure.

The head is attached to the body using a click hinge and it can look all the way down but not up and not side to side. However, you can position the head down a little and rotate it to give it a quizzical look.

For the details of the head, there are some 1×1 quarter circle tiles along with some slope pieces to give its look. There are a couple of stickers for the eyes and on the sides of the mouth. There’s also some claw and tooth pieces used for the horns. 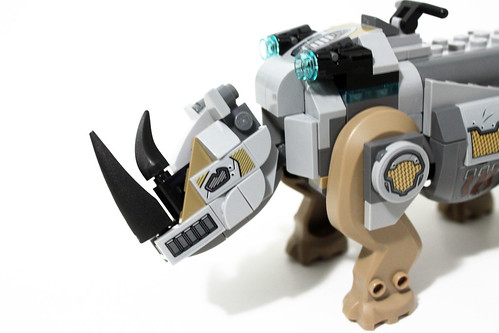 The body is pretty large and is actually surprisingly very proportionate to the rest of the build. At the front, there are a couple of stud shooters and a decorative sticker for the armor along with the handle. 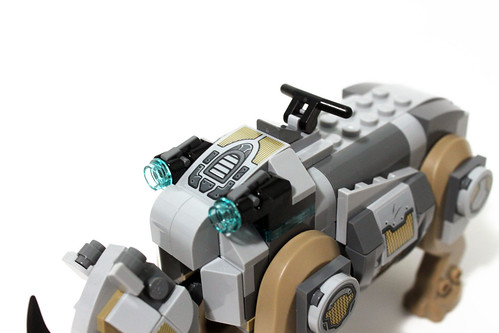 At the belly of the rhino, there are a couple of more stickers for the armor and some straps. It makes use of a car hood for the lower part of the the belly and it works well for the overall shape.

The legs are the same ones that were used on the luggabeast from the LEGO Star Wars Encounter on Jakku (75148) and they seem perfect for the rhino. They are attached to the body using some ratchet joints. Each of the legs has a 2×2 round tile that has a armor sticker. 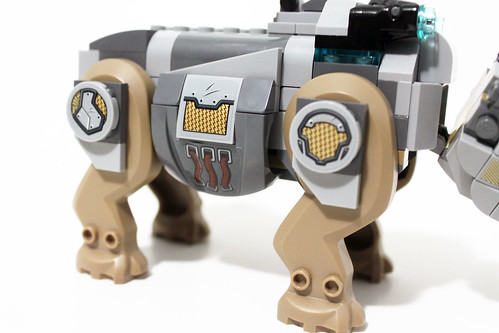 The back of the rhino is bare bones. There nothing there except for a little tail using a tooth piece attached to a Technic pin. The rear end is a little too blocky and I wish it was a little bit more rounded. 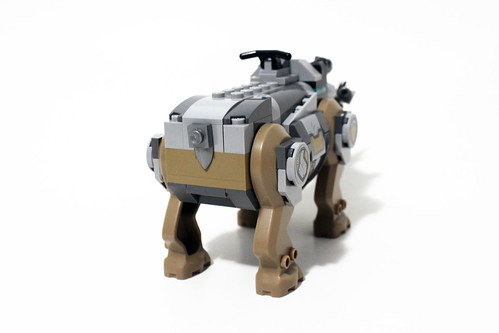 The LEGO Marvel Super Heroes Rhino Face-Off by the Mine (76099) is a decent set. The armored/mechanical rhino is one of the main draws of of the set along with the three minifigures. The mining track is a bit small and somewhat insignificant compared to the rhino however we do get a couple of the new track pieces and is currently the cheapest way to get them. 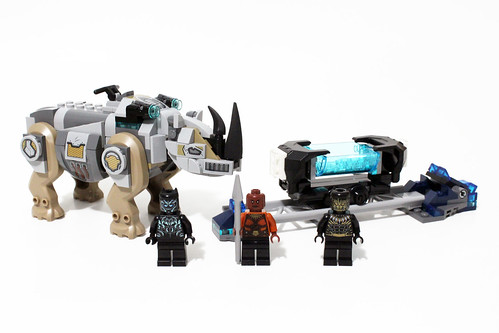 76099LEGOLEGO Marvel Super HeroesReviewRhino Face-Off by the Mine