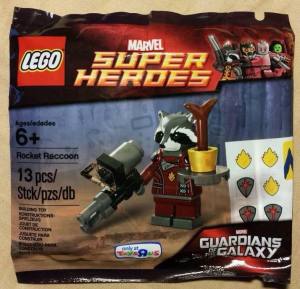 Unannounced polybags seem to be running amuck the past couple of days with another one showing up today. This new polybag is the LEGO Marvel Super Heroes Rocket Raccoon (5002145) and it appears that it is from an upcoming Toys R Us promotion. It features Rocket Raccoon in his Guardians of the Galaxy outfit as well as the potted sapling Groot. There is also a small sticker sheet with three Nova Corp logos and three Ravagers logos. The Rocket Raccoon is the same minifigure that was in the San Diego Comic Con 2014 LEGO Marvel Super Heroes Rocket’s Warbird.

. There have been rumors that the Rocket Raccoon polybag (5002145) will come with the Guardians of the Galaxy Blu-Ray/DVD release at TRU. We’ll keep you updated. Thanks to David for the heads up.