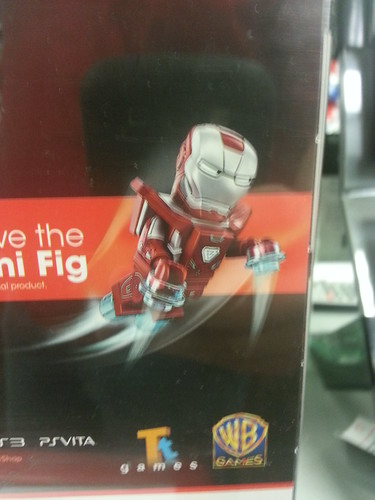 Strangely on Eurobricks has revealed the exclusive minifigure that will be included with the LEGO Marvel’s Avengers video game, possibly from GameStop

and it is Iron Man MK 33, the Silver Centurion suit from the Marvel Cinematic Universe. As you can see above, Iron Man will now wear an armor piece over his regular suit which is now mostly red and silver hence the suit name. In Iron Man 3, this suit was seen at the end of the movie during the House Party Protocol and was briefly worn by Tony Stark. The minifigure makes good use of the Legends of Chima armor piece and notice there’s also side printing on the arms and legs on the minifigure and if you look real closely, the arms are double printed.

There hasn’t been much information about LEGO Marvel’s Avengers video game besides the annonuncement of it back in January but it is scheduled to be released sometime in the fall. The LEGO Silver Centurion minifigure isn’t list on GameStop’s

listings yet but it should be up a few weeks before the game is released.