LEGO Minecraft The Waterfall Base (21134) Review 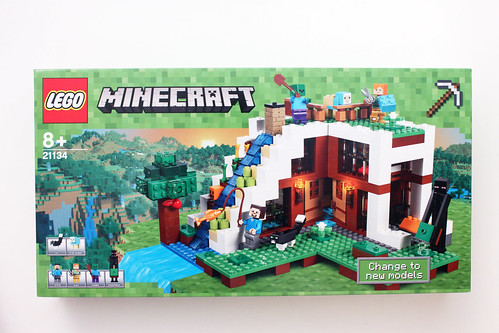 The LEGO Minecraft theme continues in 2017 with a number of sets and the first one I’ll be reviewing is The Waterfall Base (21134). The set contains 729 pieces and retails for $69.99. The contents of the box includes five numbered bags and two instruction booklets. 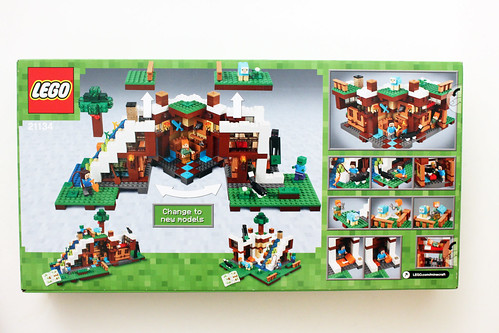 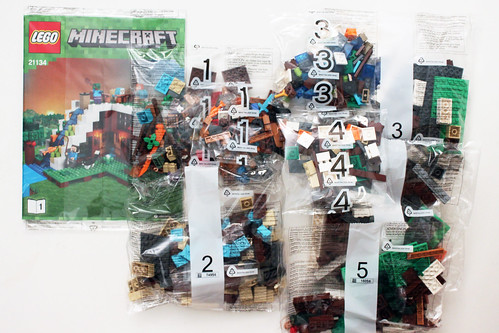 There are three minifigures in this set, Steve, Alex, and a Zombie. All of the minifigures have appeared in LEGO Minecraft sets before but there are slight differences from before.

Steve is in his usual blue shirt but in this set, he has some gray legs. His accessory is a fishing pole. 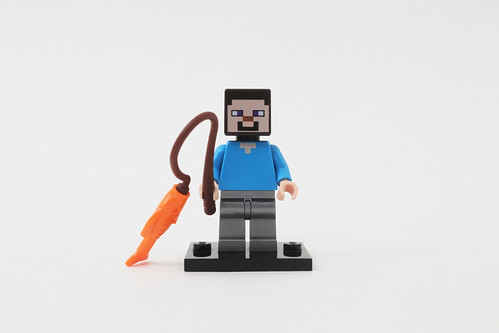 Alex has her usual light green shirt with her ponytail going down the front. Her legs here are some pearl gold ones. Her accessory is a pair of scissors and a block of wool. 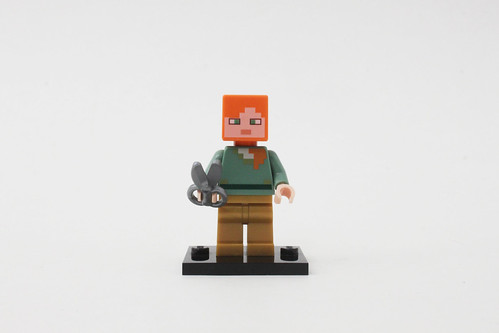 For the Zombie, there are no differences from the previous sets. It has a blue shirt and purple pants. Its accessory is a shovel. 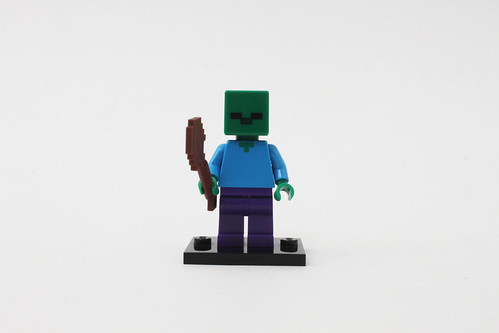 The first bag is used to build all the accessories that go in and around the Waterfall Base. This includes the Enderman along with a cat and a sheep. Some of the accessories to build include a sword frame, a fish frame, some doors, a couple of beds, torches, flowers, a furnace, an anvil, a couple of chests, and some crafting tables. 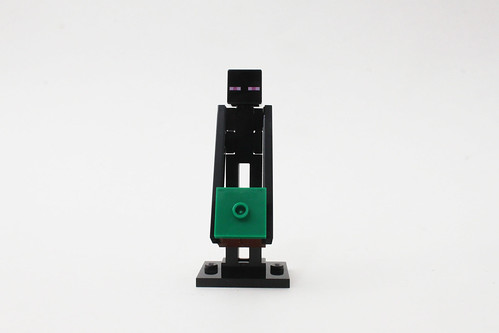 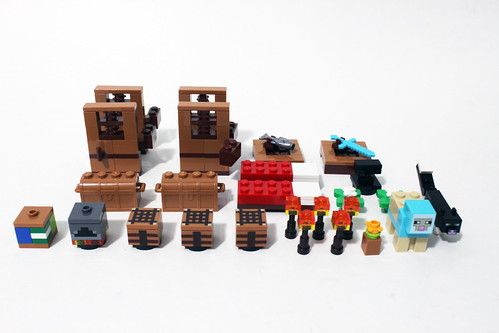 The second bag is where the actual build of the Waterfall Base begins. For this part, we have the inside of the base where you see lots of the accessories that were built in the first bag. The item frames look nice on the walls which surround the chests and crafting tables. 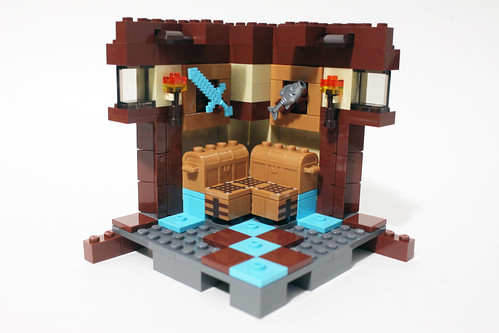 For the third bag, we have a section which is mostly a large hill of ice with trans-light blue 2×2 slope pieces. This section connects to the main base area via a couple of hinged bricks. 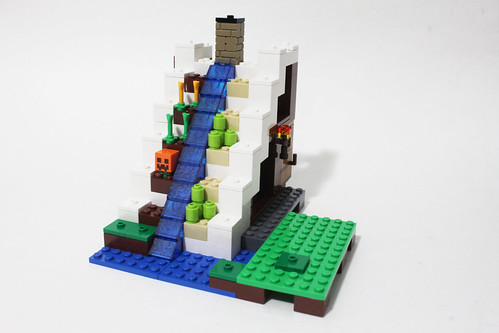 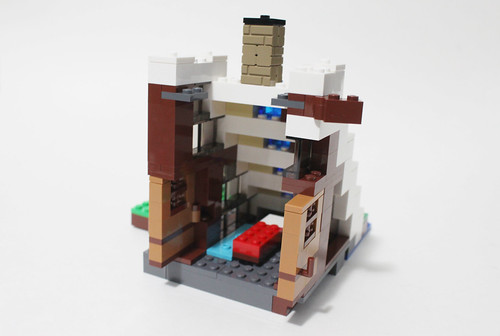 The fourth bag allows us to build the bedroom area with a bed in the upper level and an anvil on the lower. This area along with the previous has a pretty modern design feel to with the trans-black window pieces. Again, this area connects to the base using some 1×2 hinged bricks.

There’s also a play feature here with the simple sliding mechanism for the secret lava entrance. There’s some orange parts here to represent lava including the 2×2 sloped bricks. 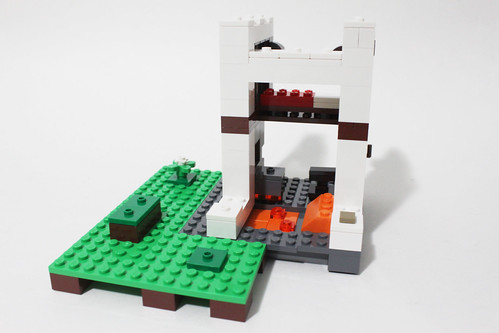 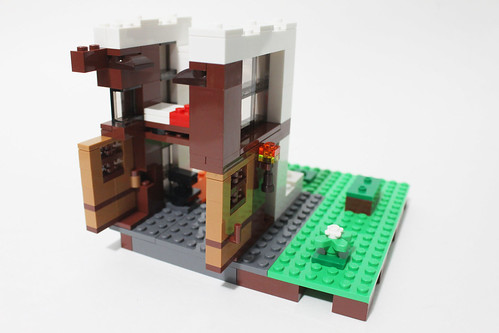 There isn’t that much going on with the last bag as you only create the rooftop garden. Here you have a couple of fences but that’s about it. 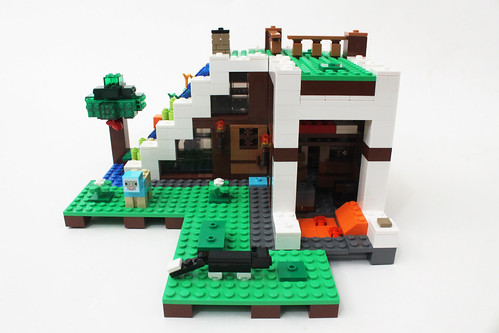 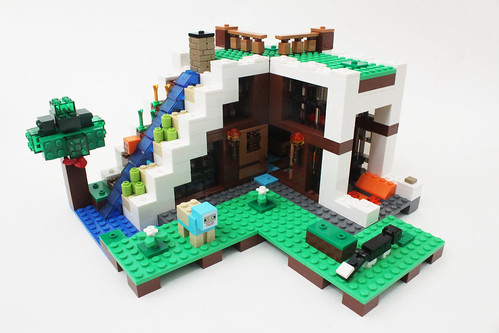 Overall the LEGO Minecraft The Waterfall Base (21134) is a decent set. It isn’t that spectacular but it’s not a bad model either. I do like the modern look of it and as with other Minecraft sets, this one is also modular so you can rearrange the sections however you want. The minifigure selection is pretty bland but there’s only so much outfits you have in Minecraft. At least there are some slight differences from previous version. 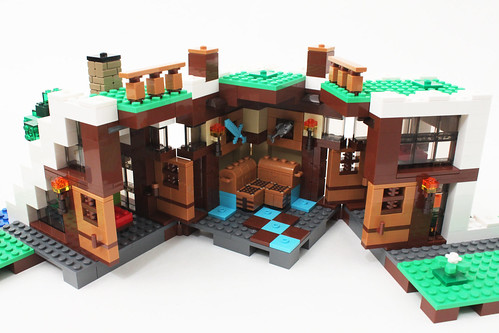 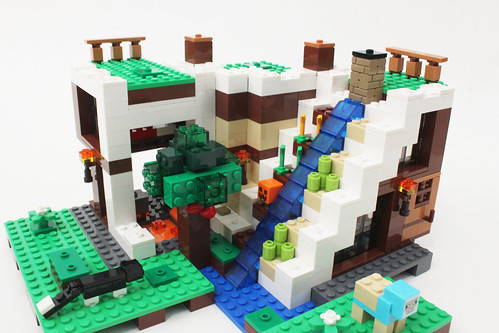 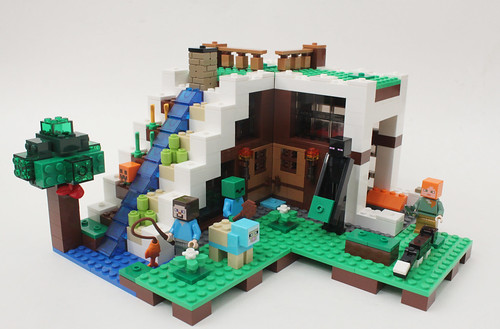