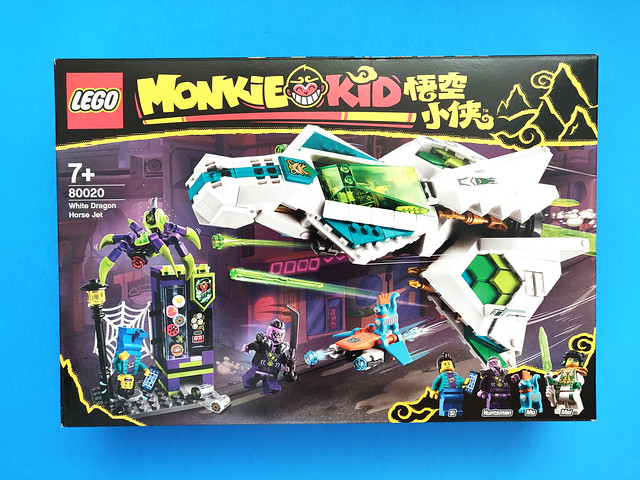 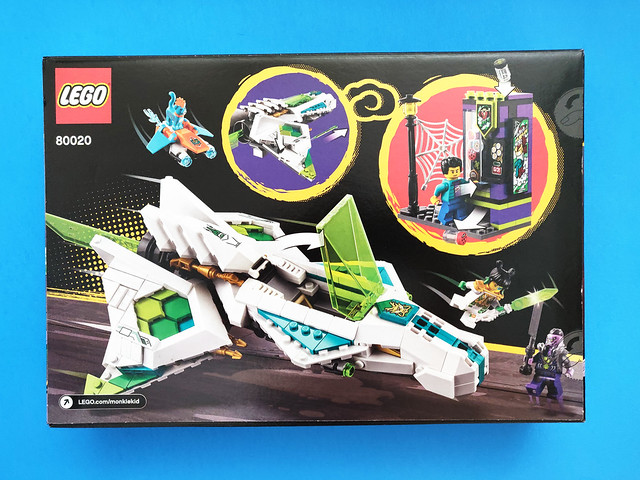 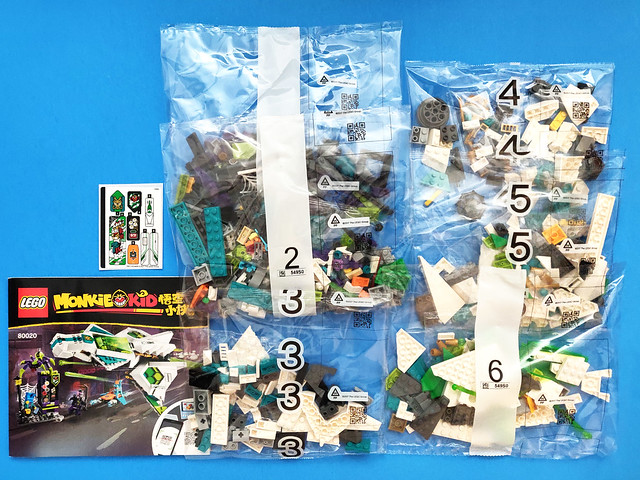 There are three minifigures in this set, Mei, Huntsman, and Si. Mei has on a new outfit that is more detailed than her previous version. This one shows a dragon prominently shown on the front and some armor on the back. She also has a pearl-gold shoulder armor as well. She has a double-sided head showing a winking smile on one side and the other with a HUD on one of the eyes. Her accessory is the Jade Dragon Blade. 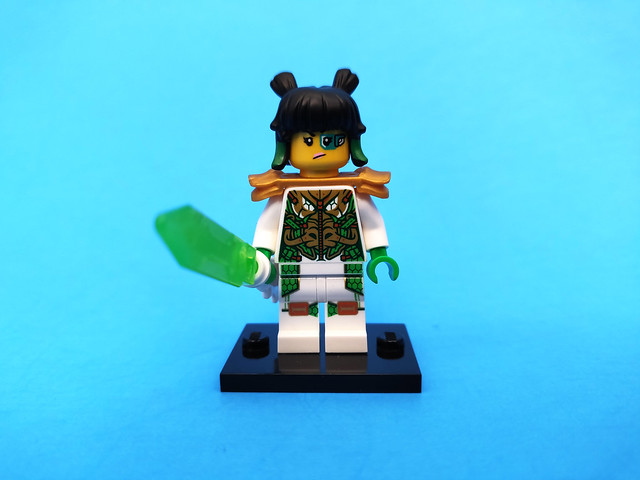 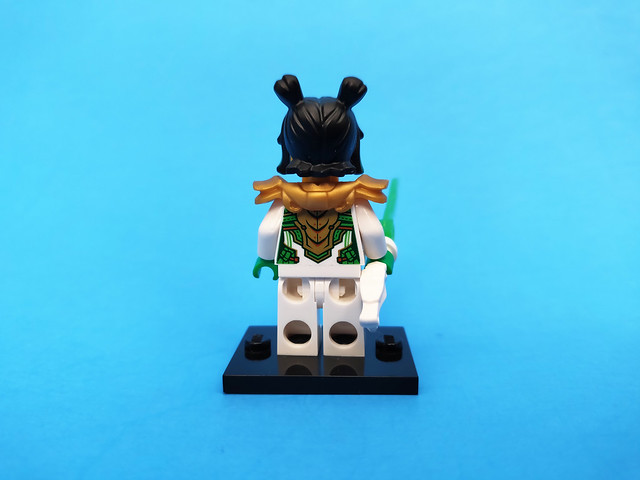 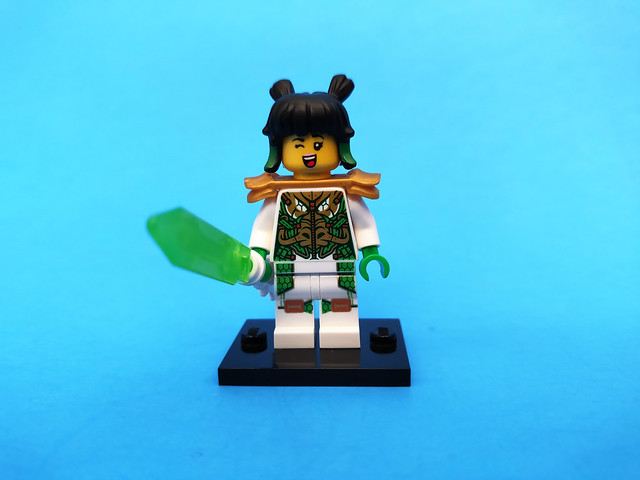 The Huntsman wears something you think someone with that name wears. He has on some sort of robe with some gray fur. That fur goes all the way to the piece that goes around his neck. He has a single-sided head with an angry expression. There’s ponytail piece that goes on top of his head. His weapon is a sword. 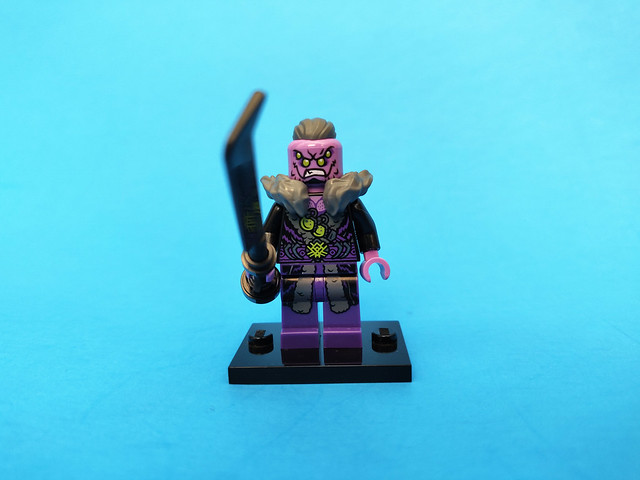 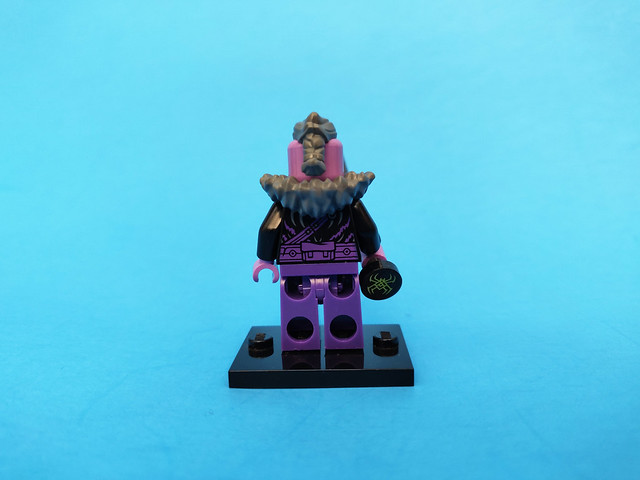 Si is a citizen that wears a purple shirt under a teal jacket. He has a double-sided head with a stern look on one side and a scared look on the other. He has a printed 1×2 tile of a cell phone. 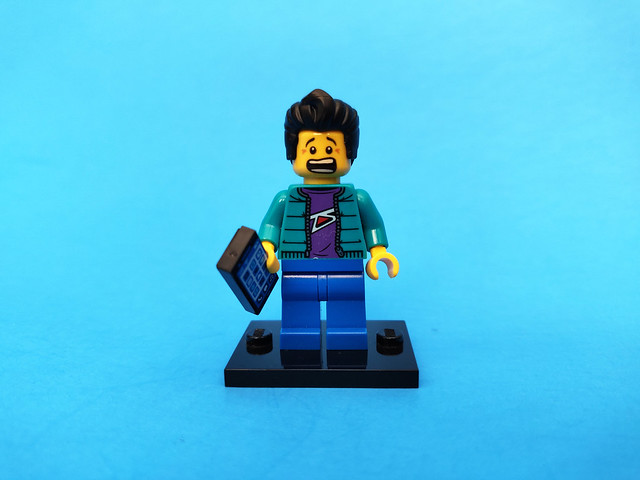 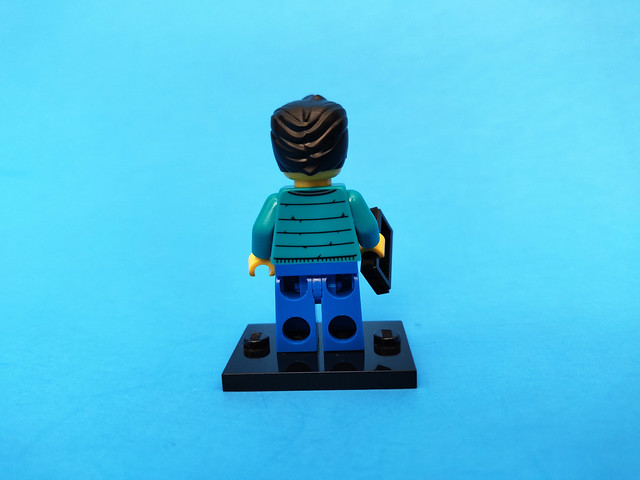 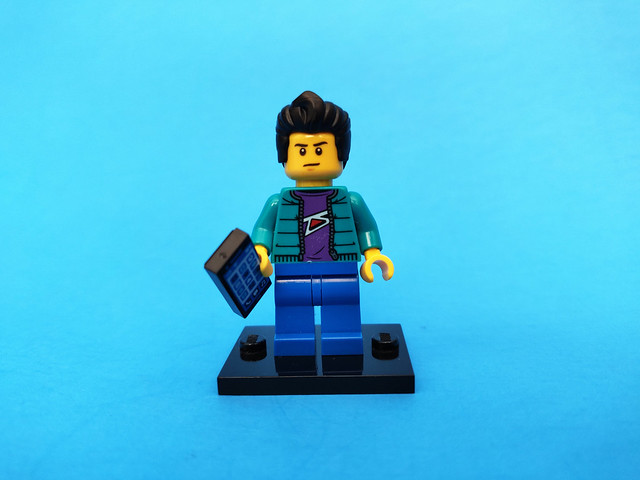 Lastly we have Mo, Sandy’s cat. If you haven’t seen Mo before, it is a teal colored cat with orange stripes and mohawk. 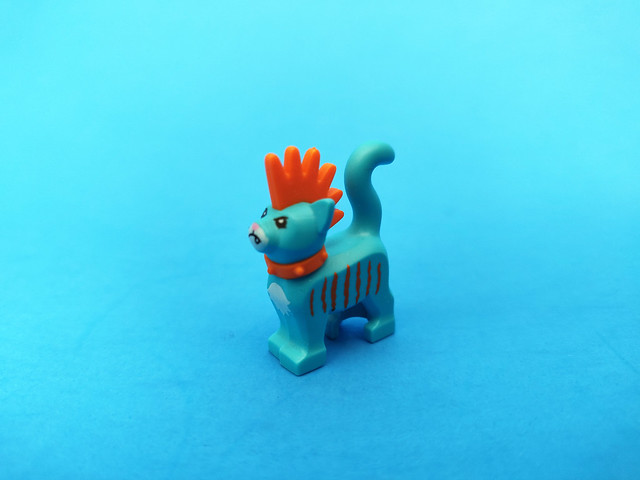 There are quite a bit of smaller builds in this set. First is Mo’s hoverboard which are in the same colors as him. There’s a spot for him to stand on in the back and the front has a couple of stud shooters. 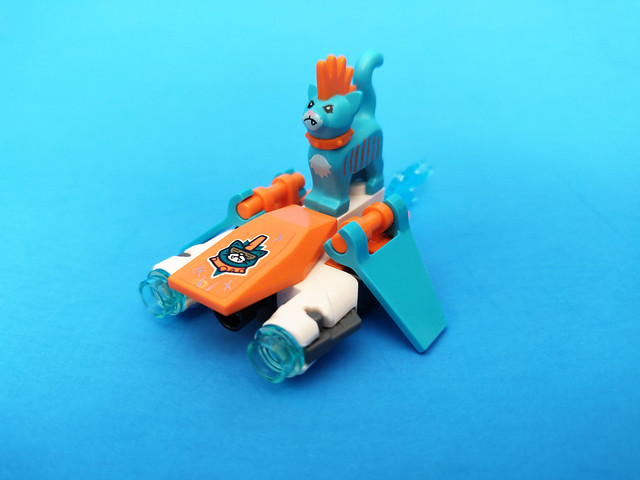 The other small build is the robotic spider. This version has a large stinger in the back. 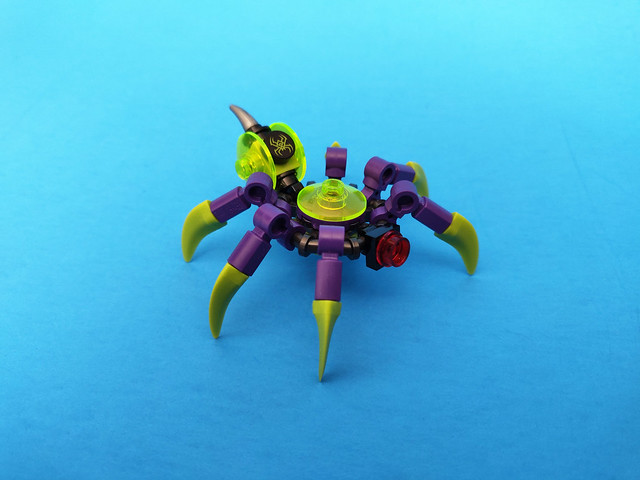 Next up is the vending machine which I think is a very cool build. The official description for the set says it dispenses canned drinks. The front of it has a window showing some of the flavors that someone can potentially get. The sides of it has some advertising of the game using stickers. The words on the side sticker translates to, “the newest style/flavor.” On to the fun part of the build, there are four drinks that you can put in on the top. There’s a slot in the middle of the machine to slide the cell phone in to “pay” for one of the cans. The tile trips the can and it drops down. 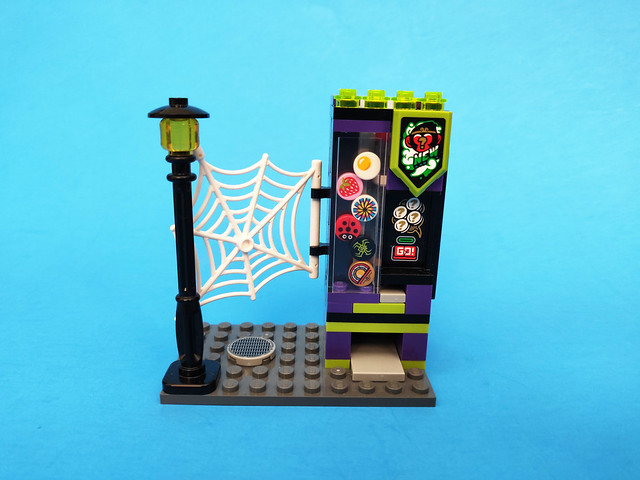 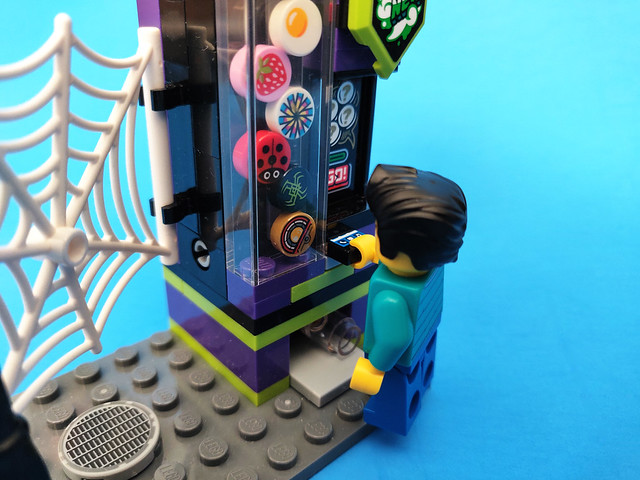 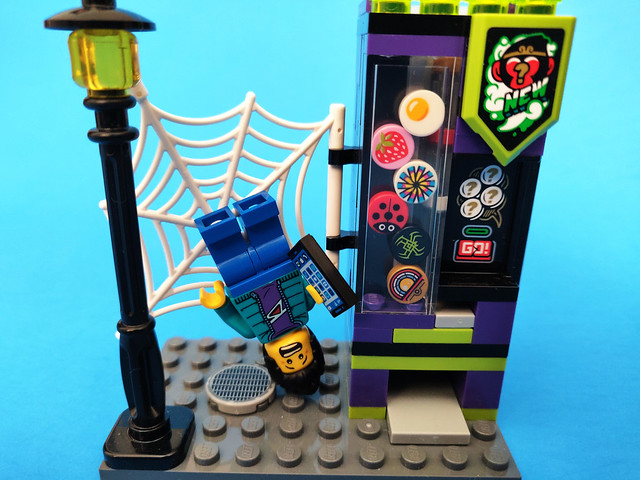 On to the White Dragon Horse Jet, it is pretty sleek looking which is in a similar style as her White Dragon Horse Bike (80006) from the first wave of Monkie Kid sets. The front of the jet has the shape of the Dragon Horse with the symbol on the top. The cockpit is the laying down kind which makes me thing how they are able to see where they are flying. I guess Mei’s HUD on her eye comes into play here. Underneath the cockpit are a couple of stud shooters. 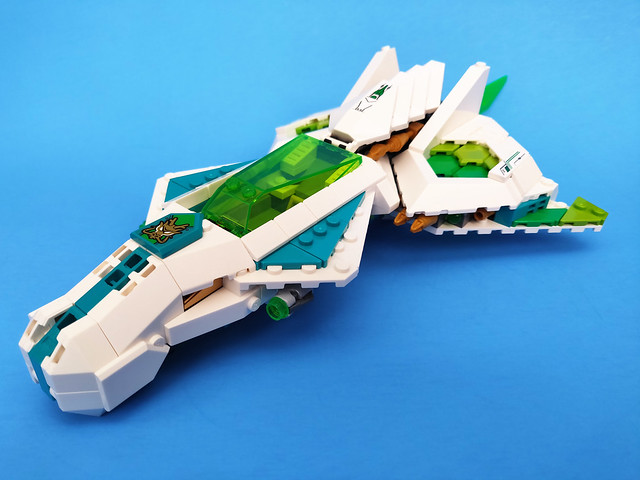 Towards the back of the jet has a lot of detail which makes it resemble more of a dragon. The wings are on hinges so they can move up or down depending on if it’s in flight mode or landing mode. The top of the wings use some stacking shield pieces to represent the scales. There are also hidden spring loaded missiles in the wings as well. The middle of the jet also has some pieces on hinges that also make it look scaly. 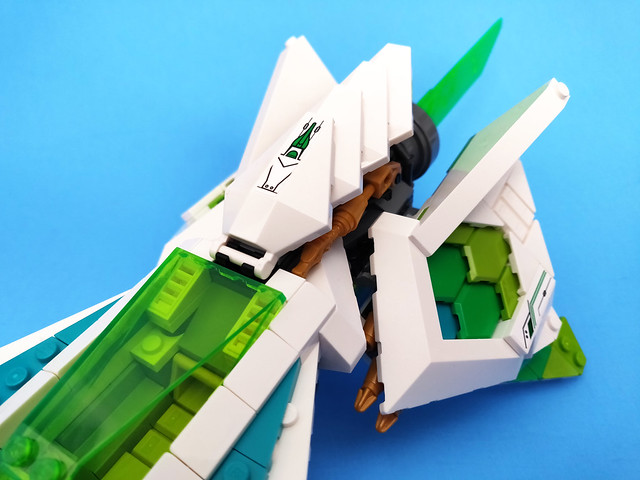 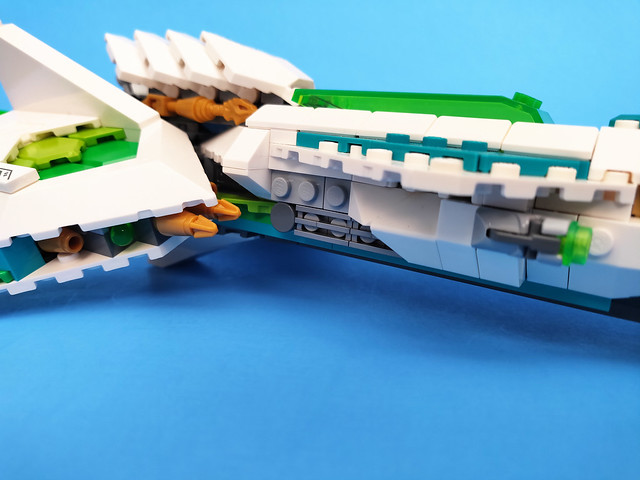 The back of the White Dragon Horse Jet is the large thruster that has a tran-green sword blade sticking out of it. I’m assuming that it represents a jet stream. 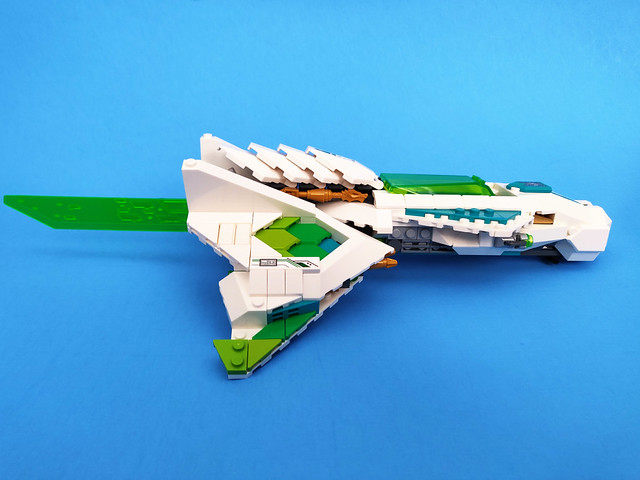 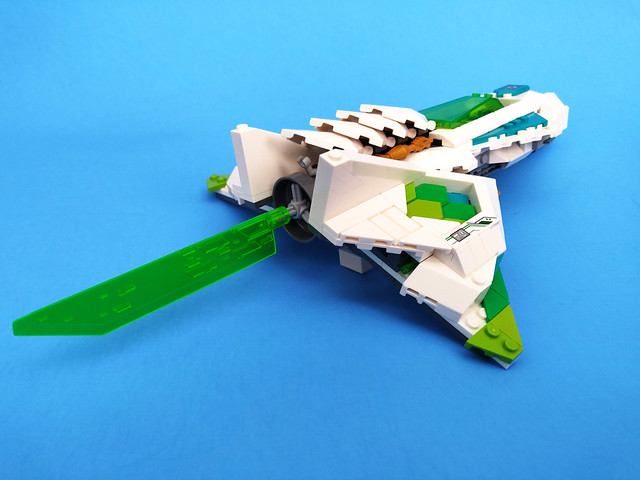 Overall, the LEGO Monkie Kid White Dragon Horse Jet (80020) is a decent set and I think I like the vending machine more than the jet itself. The way it works is very simple but effective. The jet has quite a bit of swooshability and the weapons on it will keep kids entertained for a bit. 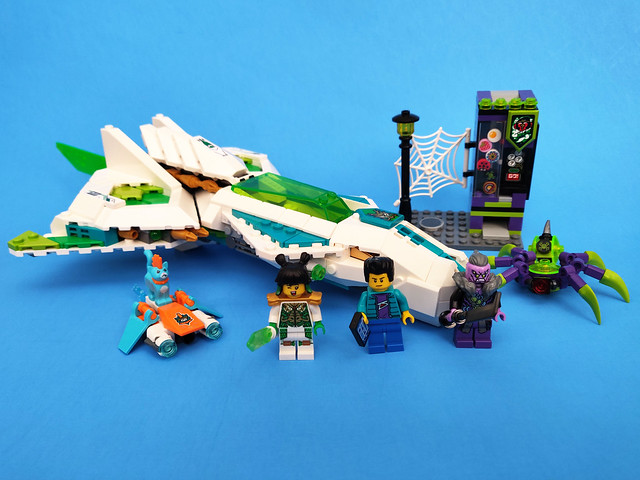