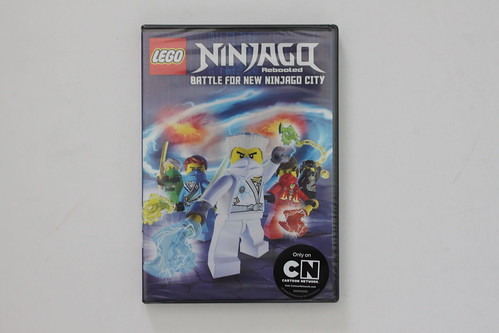 Warner Bros. Home Entertainment was again kindly enough to send us a review copy of another LEGO TV show, this time it is LEGO Ninjago: Rebooted: Battle for New Ninjago City Season Three Part One. The DVD includes the first four episodes of Season Three and the story continues off the previous one where the Ninjas defeated the Overlord. It retails for $14.98 with 98 minutes of total runtime. On the DVD itself, you have Zane featured on the cover art and the insert is for the LEGO Ninjago: Nindroids game that is available on handheld systems. 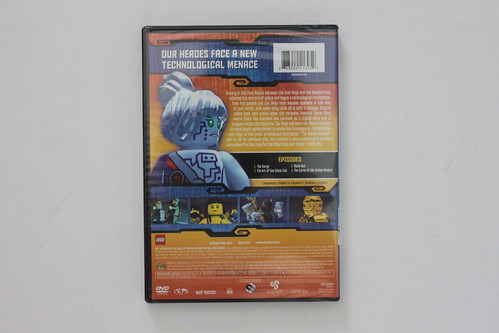 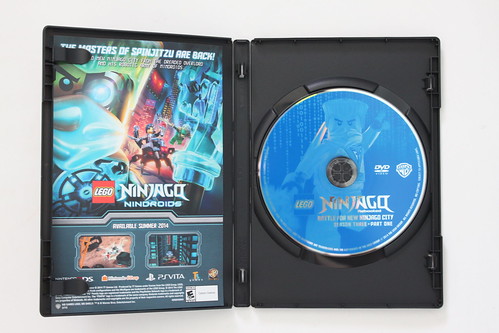 Victory in the Final Battle between the Gold Ninja and the Overlord has ushered in a new era of peace and begun a technological renaissance. Time has passed and the Ninja have become obsolete in this new hi-tech world. Just when they think all is safe in Ninjago, they’re called back into action when the reclusive inventor Cyrus Borg warns them the Overlord has survived as a digital virus and is trapped within the Digiverse. The Ninja will learn the Overlord seeks to steal Lloyd’s golden power to enable him to escape his digital prison and reign as the great prophesized destructor, “The Golden Master.”

And to aid his villainous plot, he’s created a new technological menace more powerful than any foe the Ninja have ever faced – Nindroids.

Episode 28: The Art of the Silent Fist

After the Ninjas escape New Ninjago City, they seek help from an old adversary, Sensei Garmadon. The Ninjas learn a valuable lesson and have a plan on how to defeat their new enemies.

Everything is without power due to the events of the previous episode. The Ninjas also find out that one of their friends has now become their enemy. In the meantime, Lloyd learns to reach his full potential. Finally, who is The Stranger in white?

Episode 30: The Curse of the Golden Master

The Ninjas return to New Ninjago City and pay a visit the the Serpentine under the city, who have made amends with the people of New Ninjago City. The Ninjas learn about the legend of the Curse of the Golden Master while The Stranger has a plan to steal more Electrocobrai and to power the Nindroids. At the end of the episode, we finally learn the identity of The Stranger.

You can pre-order your own copy of LEGO Ninjago: Rebooted: Battle for New Ninjago City Season Three Part One on Amazon

and it will be available on August 5th. Warner Bros. Home Entertainment also has provided us five (5) copies to giveaway to some lucky winners. Using our trusty Rafflecopter app below, you have a number of ways to enter the contest. The contest runs through August 8th and is open to the United States only and no P.O. boxes. Winners will be contacted by the email provided. Good luck to all!