LEGO has released a preview of the Ninjago Rebooted TV series on their YouTube channel. The video talks about the Ninjas’ quest to save the world of Ninjago from the Overlord while battling various enemies. At the end of the video, there were a couple of short clips showing the General Cryptor and Nindroids in production. The TV show should be airing on Cartoon Network sometime next month with the sets being released on December 1st. 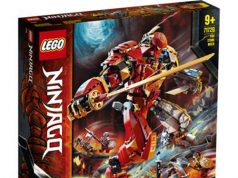