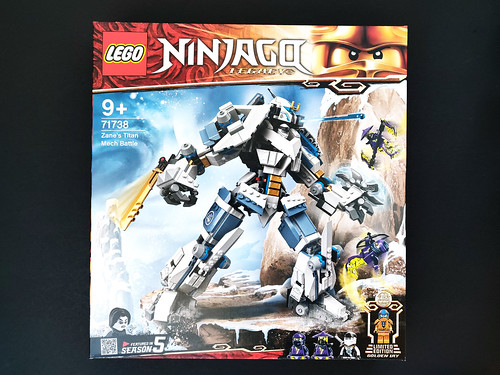 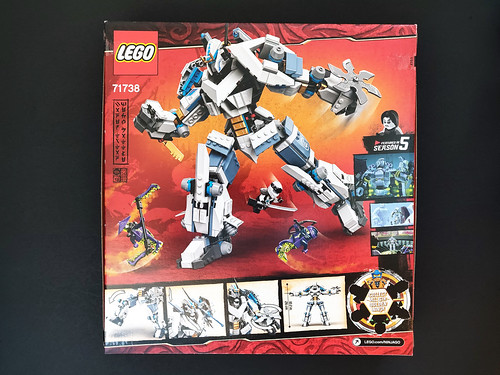 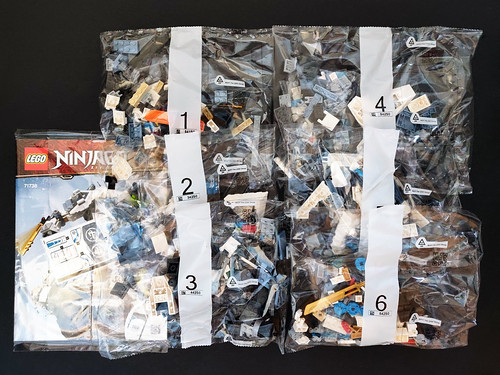 There are four minifigures in this set, Zane, Ghoultar, Souch Archer, and Golden Legacy Jay. Zane is in his Deepstone black and white robe which shows a cool Ice Elemental symbol on the back. He does wear a sheath to hold his sword. His head is metallic with an angry expression. The other side of the head shows his robotic features. He does have a white mask with a black bandana to cover his head but the set also includes his metallic silver flattop hair as well. 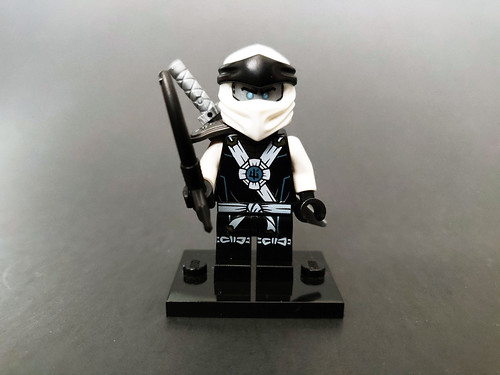 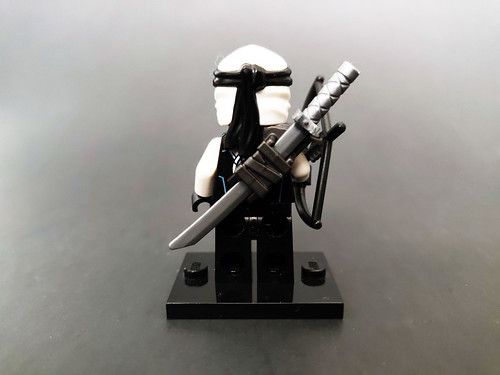 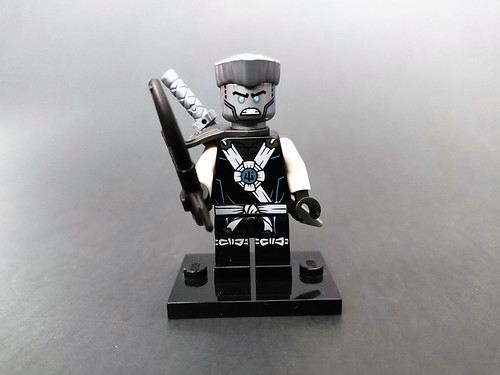 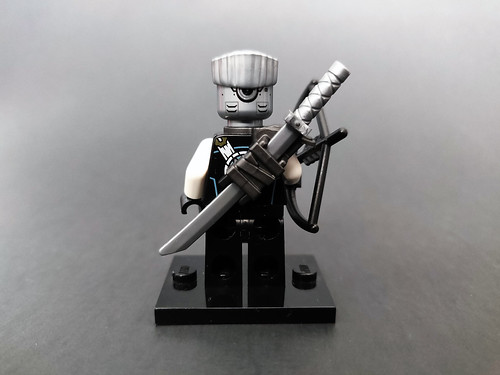 Ghoultar has on a tattered purple robe with some trans-green ghost legs. The head is also translucent showing a skeletal face. A purple rice hat completes his look. He has a double scythe as his accessory. 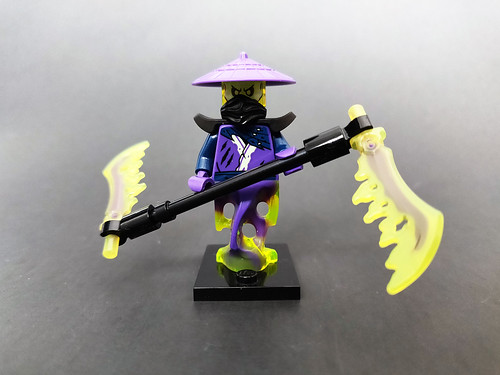 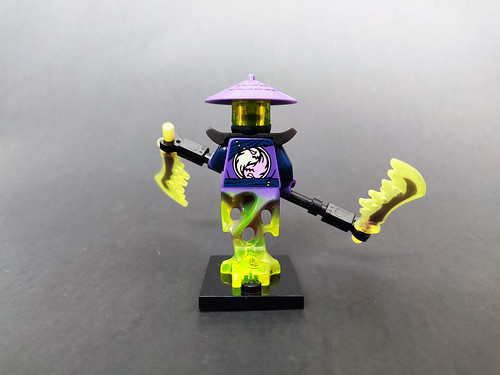 Soul Archer has on the exact same outfit as Ghoultar. The only difference is that it doesn’t have the shoulder armor and wears a full head mask. Its accessory is a bow and arrow. 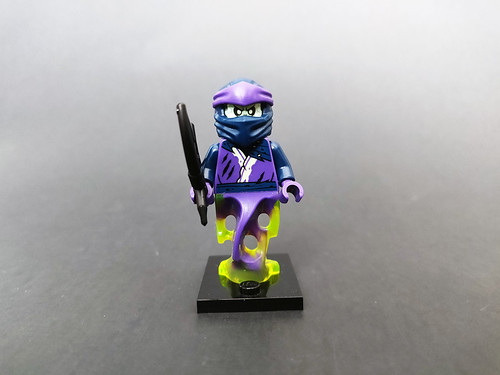 Lastly, we have Legacy Jay who is the golden minifigure in this set to celebrate the 10th anniversary of LEGO Ninjago. The robes are mostly gold with some blue to give it some contrast. He has a double-sided head with a smile on one side and a determined look on the other. He does have a pair of golden katanas that are stored in the sheath piece that goes around the neck. Like with the other Legacy Ninjago characters, he does come with a brick-built stand with the printed 2×2 round tile. 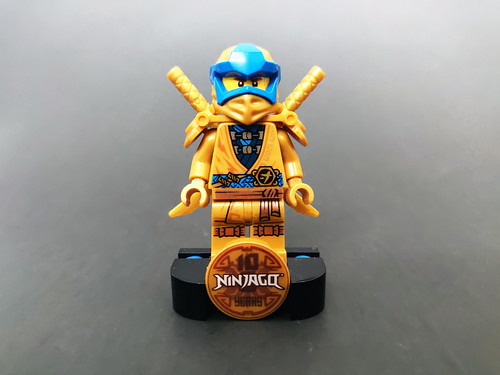 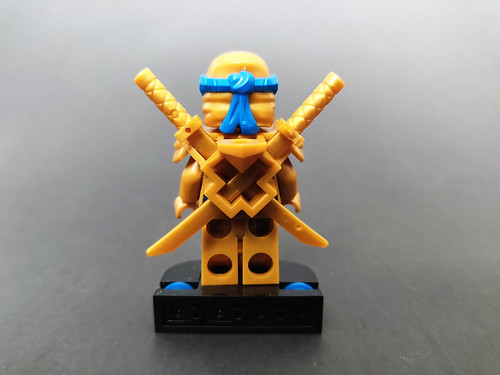 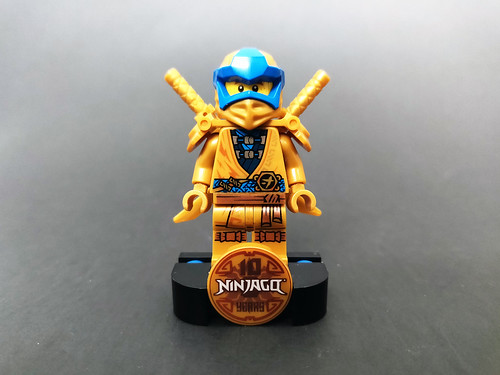 As I said before, all the parts go in to Zane’s Titan Mech which makes it a lot bigger than the previous version. As a Gundam/Robotech fan, I think this build is very reminiscent of those type of mechs and I like it very much. If you aren’t a Ninjago fan and didn’t know anything about it, you wouldn’t even know that it is from the series. 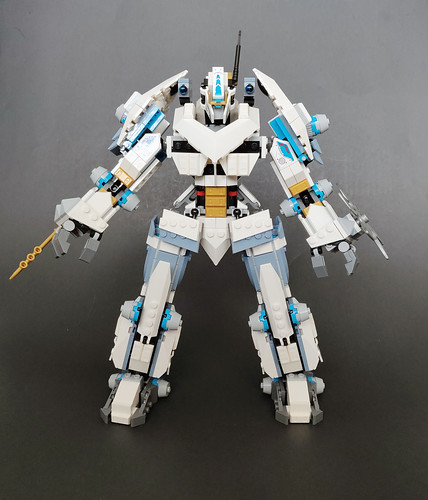 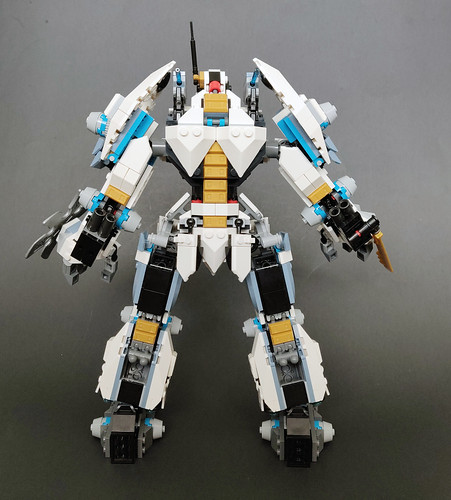 Starting at the head area, it is on a ball joint that has one trans-blue eye in the middle although it’s a little bit hard to see. There are two fins that are angled inwards to give it a slimmer style head. Lastly, there’s an antenna on the left side of the head. 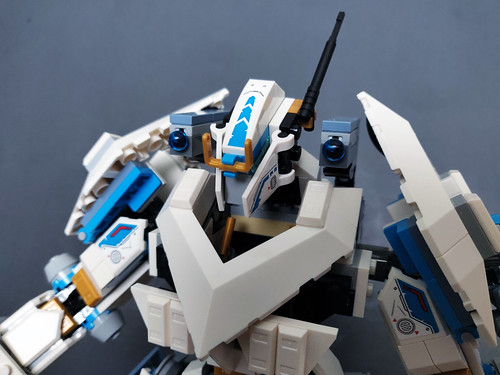 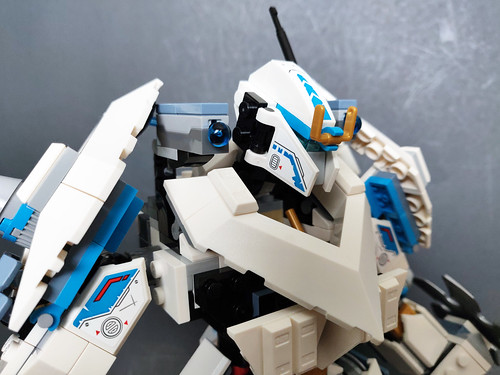 Flanking the head are a couple of spring-loaded missiles which are angled using some hinge joints. Right below the head is a little cockpit for Zane to fit in. I really do like the angle piece that is is used for the chestpiece as it gives it a very Japanese feel to it. The back of the mech uses some gold bars to represent the spine. 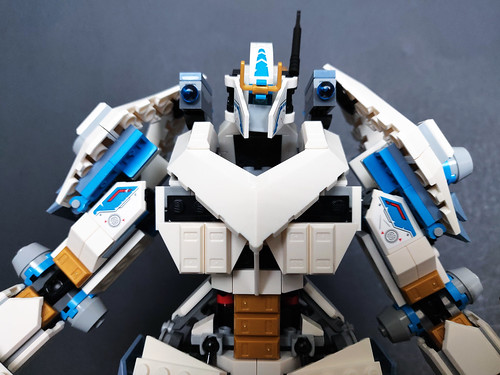 Going to the arms, the left one has a spinning blade with some articulated fingers. Near the shoulder area is a large armor which I thought was going to restrict the arm movement but LEGO designer Niek van Slagmaat has made it into a way where the armor is attached to hinges so it moves without hitting anything. There is a slight issue with it knocking off the missile launchers if you angled it too close. 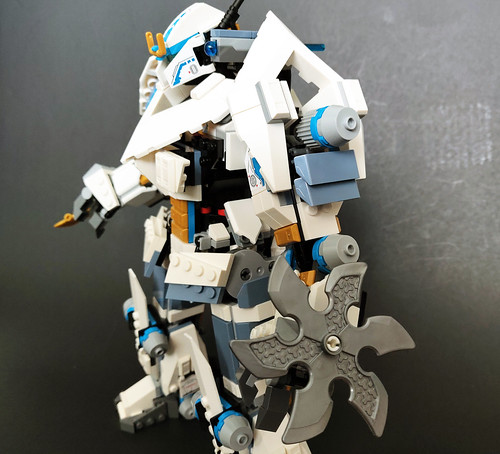 The right arm is the same as the left except that it has a golden blade. Both of the arms have a full 360° movement along with elbow joints and wrist swivel. 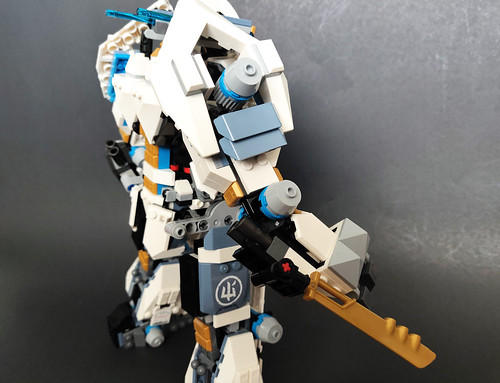 Heading to the lower half of the Titan Mech, the hip area has some armor pieces attached to ball joints so it doesn’t restrict any movement while you’re posing it.

Going down the legs, both of them are exactly the same. There are some stickers on the side panels of the thigh for some detailing. One of the grips that I have with previous LEGO mechs is that the legs are very stiff but that is not the case with this set. Niek has ingeniously implemented a double ball joint system that allows the knees to flex in a natural way that I haven’t seen before in other LEGO mech sets. When you bend the knee, the lower ball joint goes into the hollow area right below it. On the sides are some thrusters that uses some new beehive pieces in dark gray. 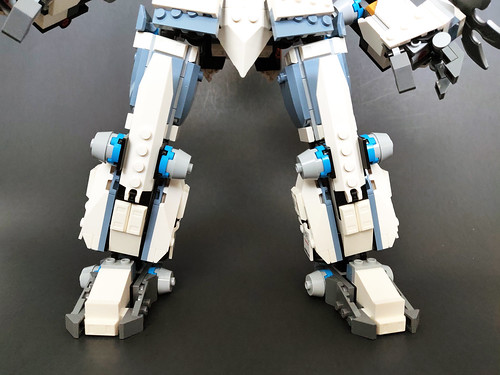 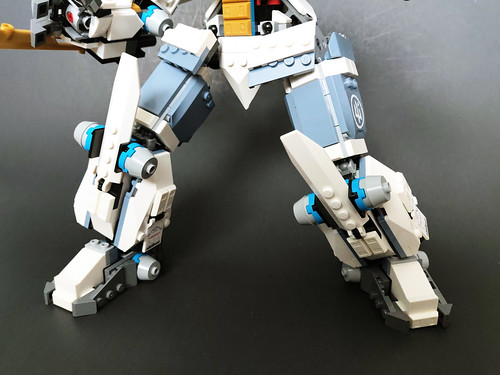 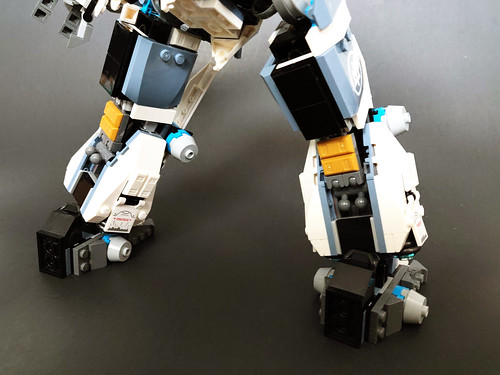 Finally we have the feet that are also on ball joints but the mobility is somewhat limited due to the panel on the back heel. 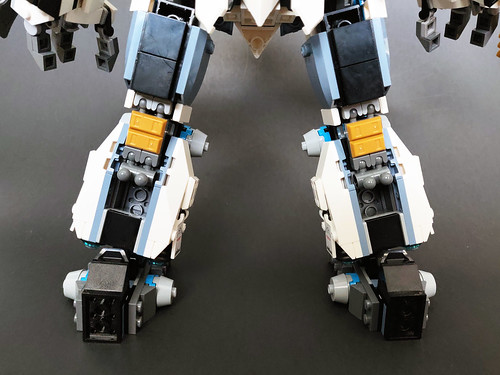 If I didn’t make it known by now, the LEGO Ninjago Zane’s Titan Mech Battle (71738) is my favorite set out of the 2021 wave. Not only does it look really good, it has lots of poseability due to all of the different joints used including the double ball joint system on the knees. The minifigures are just icing on the cake at this point for me. I will say that if the LEGO Ideas Voltron (21311) wasn’t released, this mech would have been my favorite mech that LEGO has released. 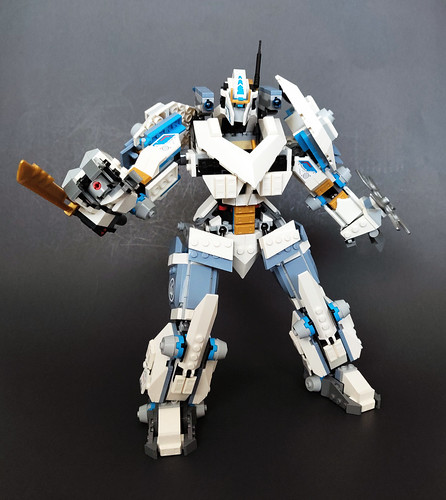 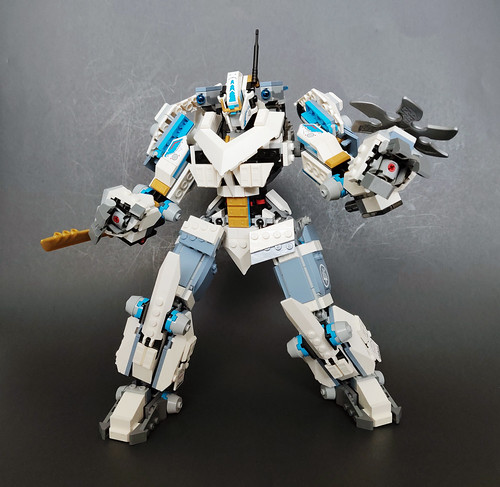 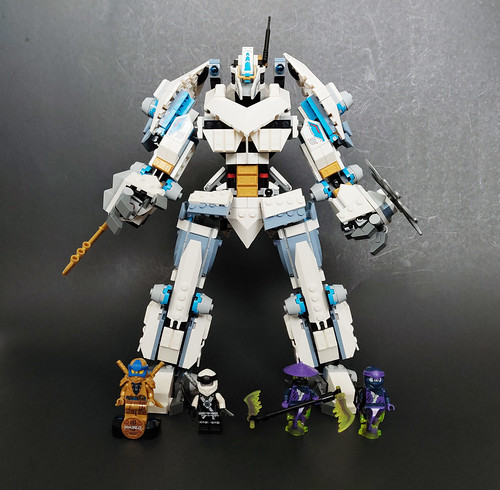