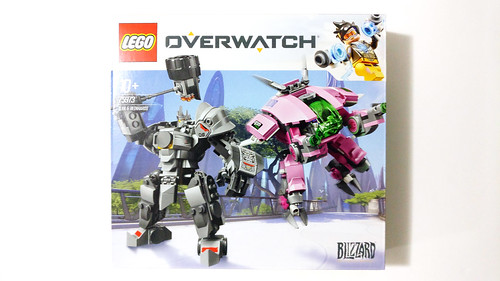 When the images of the LEGO Overwatch sets were revealed, my most anticipated one was the D.Va & Reinhardt (75973). The set features one of my tank mains in D.Va and I love how her mech looks. The set has 455 pieces and retails for $39.99. The contents of the box include three numbered bags, a sticker sheet, and two instruction booklets. 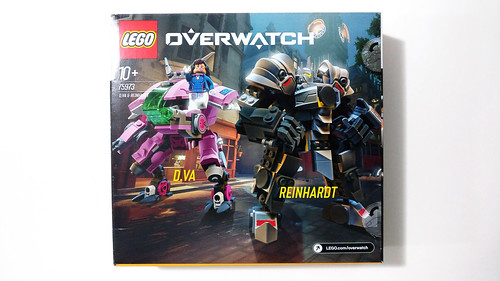 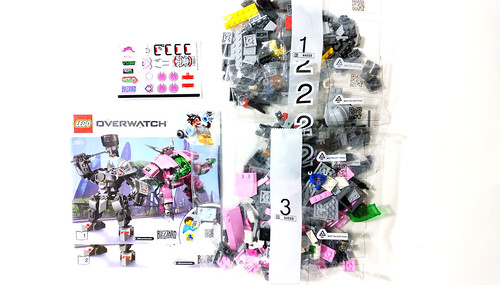 Reinhardt Wilhelm was part of the original Overwatch strike team during the Omnic Crisis. His torso shows him in a slimmed down version of his Crusader armor skin. There’s printing of J08 on the chest which is the company that made the armor. The back of the torso shows his rocket booster for when he charges. Reinhardt also has a double-sided head with one side showing his white beard and lost left eye due to the OR14 unit. 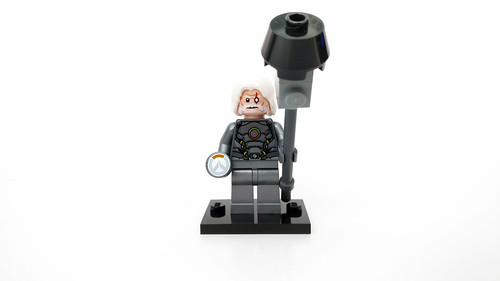 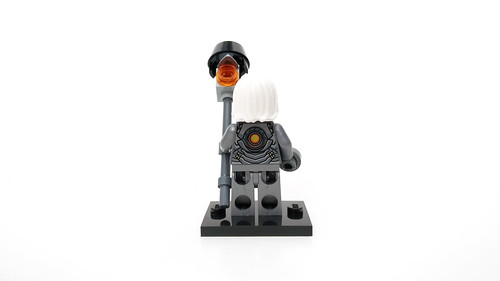 The other side of his head shows him with facemask which he uses with the helmet. One thing I will note is that the helmet fits very loosely on the head.His accessories include a smaller version of his Rocket Hammer and a printed 1×1 round tile of the Overwatch symbol which he gets from Balderich von Adler in the Honor and Glory animated short. 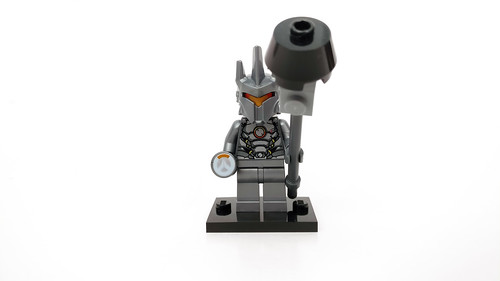 D.Va, aka Hana Song, is one of the most popular characters from the game. She wears the iconic blue, white, and pink jumpsuit with her bunny logo in the middle of the torso. The back of the torso shows her D.Va logo on top of some metallic printing. The jumpsuit printing also goes down to the middle part of the legs. She has a double-sided head with one side showing her winky face and the other showing her blowing some bubble gum. The hair piece also has her headphones molded onto it. Her accessory is her pink Light Gun. 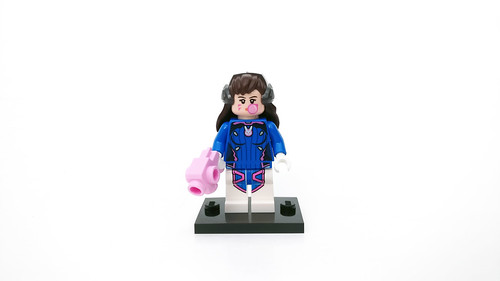 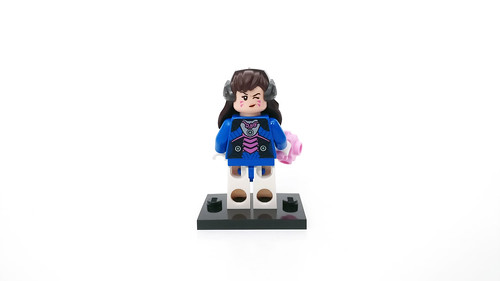 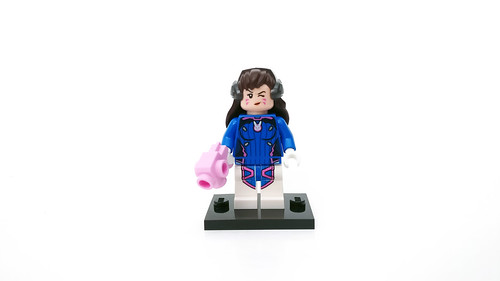 The first part of the build is Reinhardt’s armor. It starts off at the torso where the Reinhardt minifigure can slot in the top and held on using some hinge slopes. The rocket booster on the back uses a 2×2 trans-orange shoe round. The shoulders use some new bulky pieces for armor pauldrons. Like with the minifig, the left pauldron has a sticker of the J08 company. They are also on hinges so they can move when he lifts up his arm. 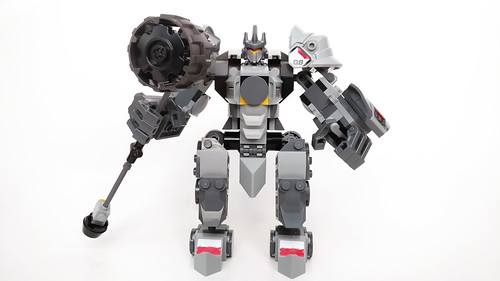 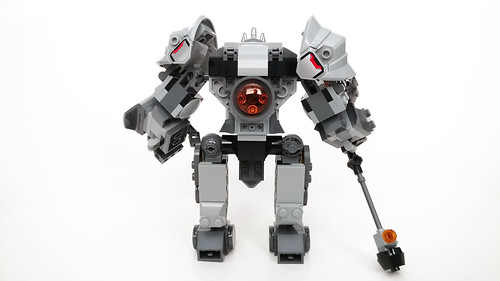 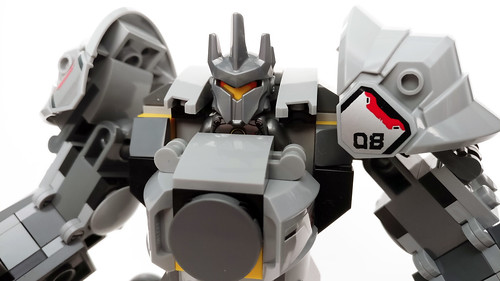 The legs are built similarly and they are attached using some click joints while the feet use ball joints. There are a couple of stickers here for some more detailing at the feet. 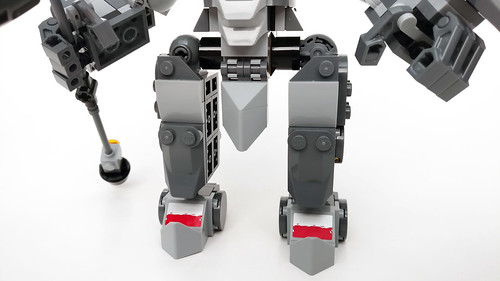 For the arms, they are also similar in build with some slight changes with the forearms. The left forearm has a small build for the Barrier Field which is his shield. There are also some stickers for this lion sigil on the shield. Both arms are on ball joints and have a good amount of articulation. 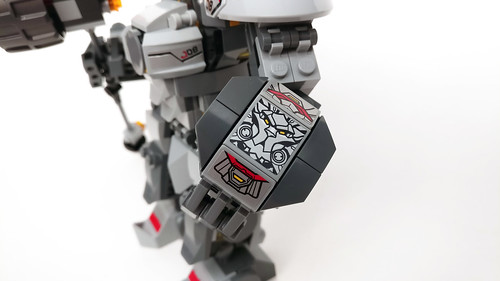 The hands are articulated and there are some clips to hold his Rocket Hammer. The hammer itself uses a large space wheel with some trans-orange 1×1 round plates for the rockets. 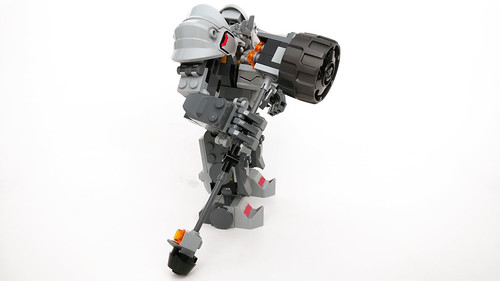 D.Va’s mech, named Tokki, is a bipedal mech that is actually pretty mobile for being a tank. Like with Reinhardt, the build starts off with the mech’s torso, more specifically, the cockpit. There’s a green windshield along with the bottom portion that has some blasters for the controls. The back of the cockpit also has a hatch for D.Va to jump into her mech after she calls for it. 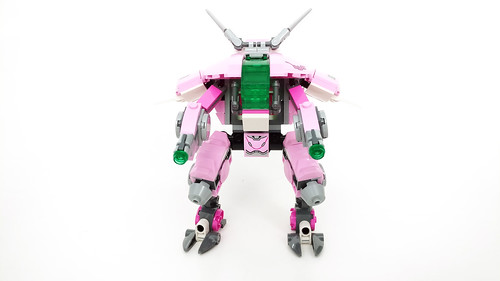 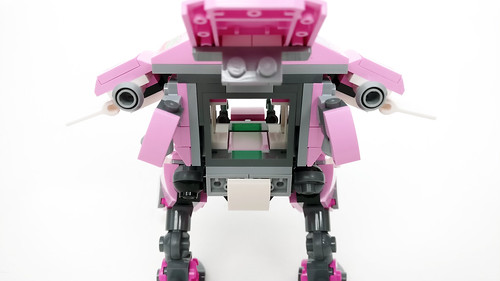 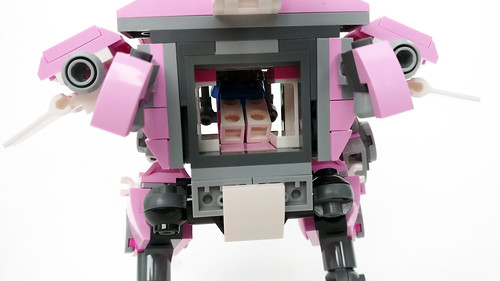 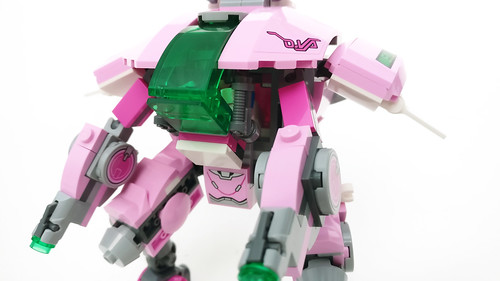 Since D.Va is also a walking billboard, there are a number of stickers for her sponsors including including apmTV.kr and a real-life one with Blizzard. There’s also some for her logos as well. 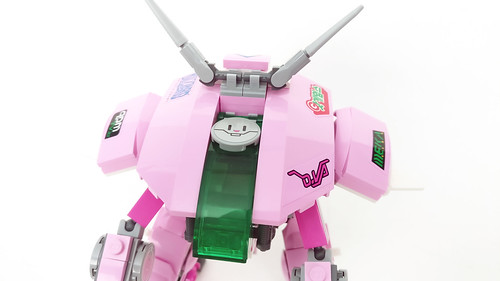 The front Fusion Cannons are also on ball joints on and have lots of articulation. Here LEGO uses some stud shooters to give the set more playability and it doesn’t look too bad. 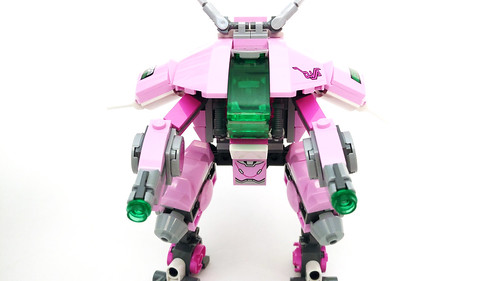 On the back and on the sides are some boosters that makes use of the newer cone pieces. The side boosters are attached to the wings while the back ones are are on ball joints. 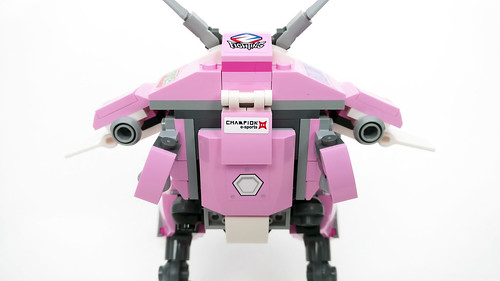 The legs are on click joints which give Tokki lots of stability considering the cockpit is pretty heavy. The feet uses some T-Beams so that toes and heels stays flat while you are posing it. There are clips on each leg to attach the Light Gun when D.Va is in her mech. 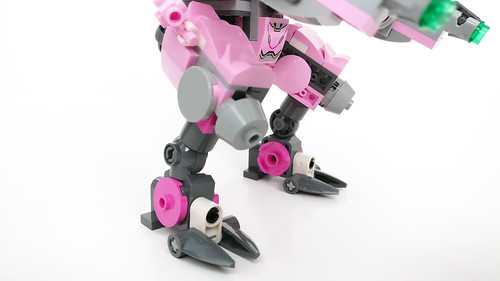 I was pretty excited for the LEGO Overwatch D.Va & Reinhardt (75973) set and after building it, it is currently my favorite set out of the initial wave. I am kind of biased since D.Va is my favorite tank character. The build uses a lot of new pieces in pink and it is a good representation of the mech. I also like Reinhardt but not to the extent as D.Va. His armor is bulky and I do like how his minifigure is incorporated into the build itself for his head. Like with the previous sets I’ve already reviewed so far, the stars of the show are the minifigures. D.Va is pretty much perfect down to her bubble gum blowing expression. The two heads of Reinhardt is great because you can display him in minifig form or the larger version which isn’t needed but definitely appreciated. 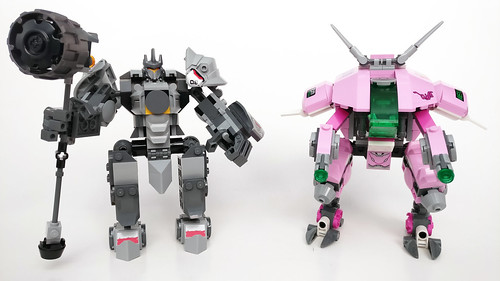