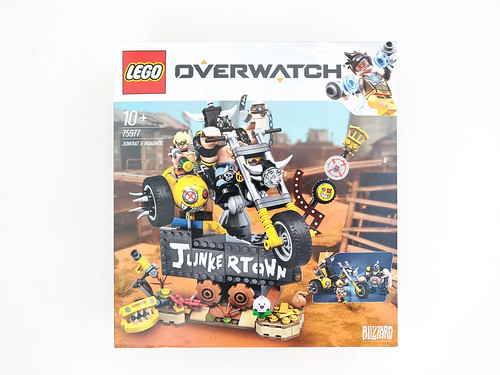 The new wave of the LEGO Overwatch is now available for purchase and the other set in the wave that I’ll be reviewing is Junkrat & Roadhog (75977). The set has 380 pieces and retails for a not so appealing $49.99. The contents of the box include three numbered bags, a bag for Roadhog’s pieces, two instruction booklets, and a sticker sheet. 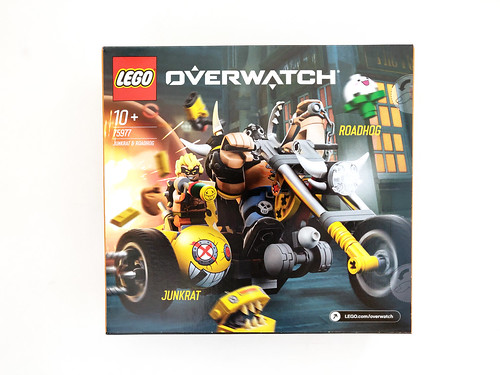 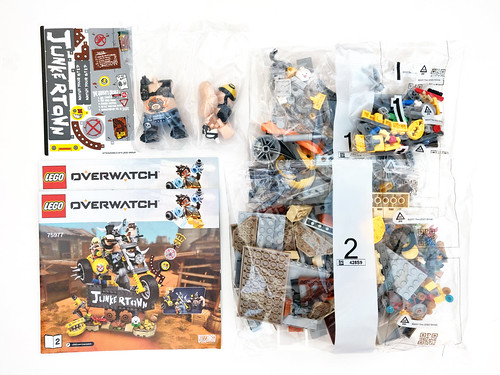 There are only one minifigure of Junkrat and a bigfig Roadhog. Junkrat’s torso shows him wearing a harness filled with grenades. There’s also a canteen by the waist which is filled with half sweetened milk tea with boba. The legs show him with an orange peg leg which is similar to some of the pirate captain minifigures that have been released in the past. Going around Junkrat’s neck is a harness which holds his RIP-Tire ultimate. I will say this is one of the most scariest ultimates in the game since you don’t know where it’s coming from. He has a double-sided head showing him with an evil smile on one side and evil laugh on the other. There is some dark gray on the upper part of the head showing smoke covering his face. Lastly, he has some wavy yellow hair however I wish he had some trans-orange on the tips to represent his hair on fire. His accessories include his Frag Launcher that has a printed 1×1 round tile of the smiley face. He also has a Concussion Mine with the same printed piece as well as a Steel Trap. 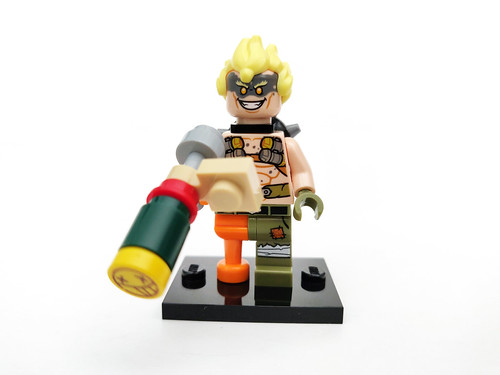 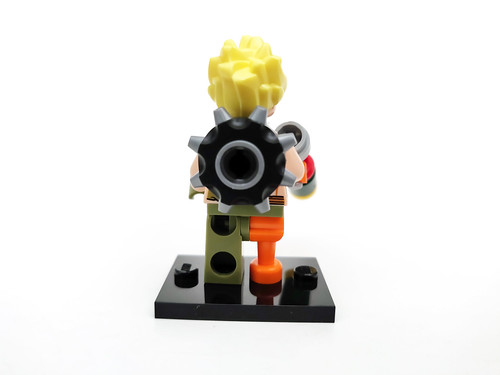 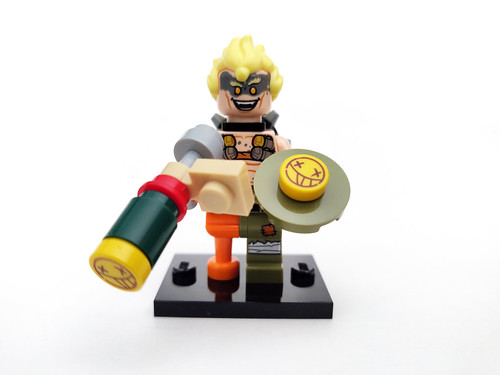 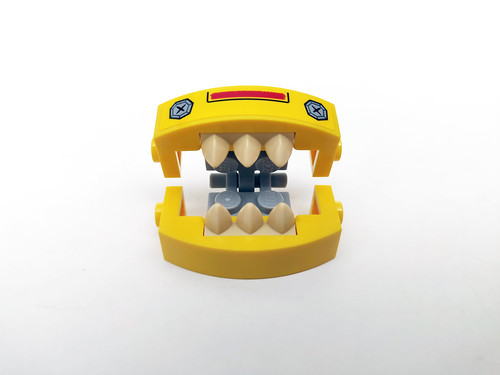 The Roadhog bigfig is one of the most detailed bigfigs that has been released. The mold is specially made for Roadhog which has some spikes on one of the shoulders. The head actually uses a plain minifigure head with his mask going over it. His belly has printing of his Wild Hog Power tattoo. His belt buckle shows a Greater Australia ROADR8GE license plate. His accessories include his Scrap Gun which isn’t too accurate but has a similar shape. He also has his Chain Hook which attaches to his back. 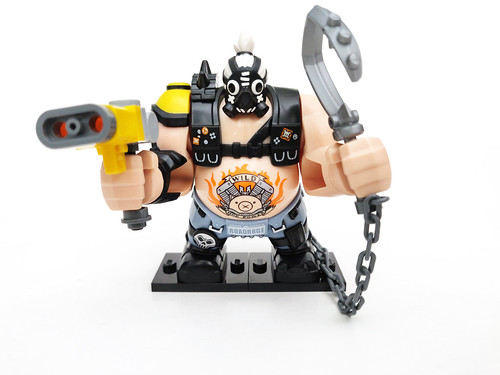 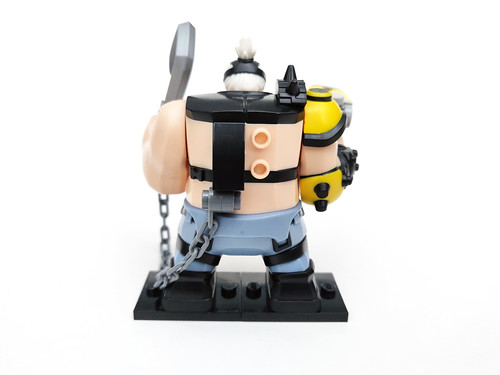 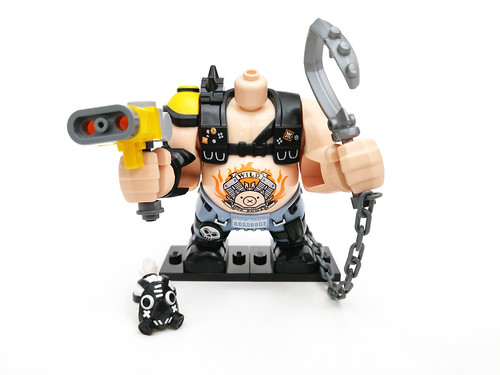 There’s also a little Pachimari that uses a printed dome piece on a leaf. 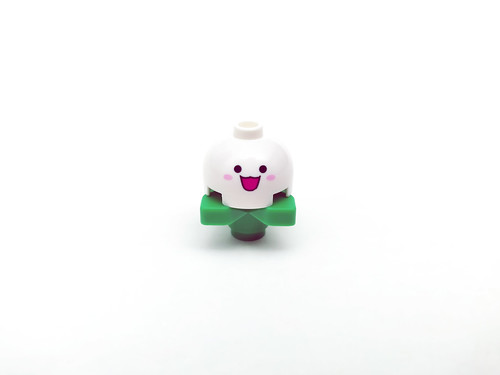 The build features two things, Roadhog’s bike and a portion of Junkertown. The bike itself isn’t playable in the game but it serves as something you can destroy on the Junkertown map. It is located in the spawn room if you play as Attack. The bike itself is very well made and has a Mad Max feel to it. Roadhog can fit easily onto it and he fits all the way down to the little barrels on the side where the foot pedals are. The headlight as well as the headrest has spikes coming out from the sides. The back of the bike has four exhausts, two on each side. Lastly, there is also Junkrat’s sidecar which has a printed smile on the front and some spikes on the wheel. 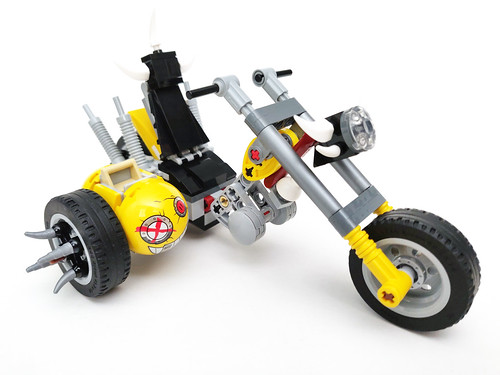 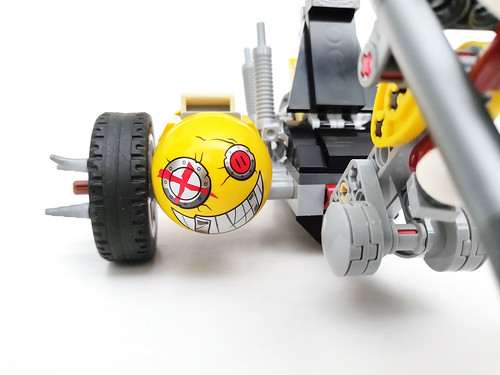 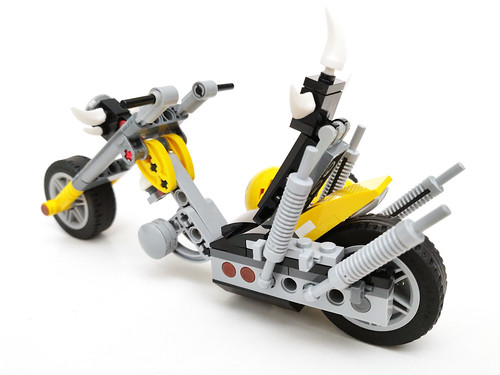 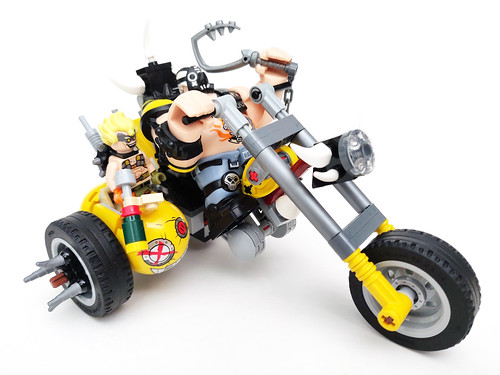 The other part of the build is made of various locations on the Junkertown map. The main part of it is the Junkertown sign that is made up of four stickers. The sign along with the gears below it make up the gate at the first point of the map. 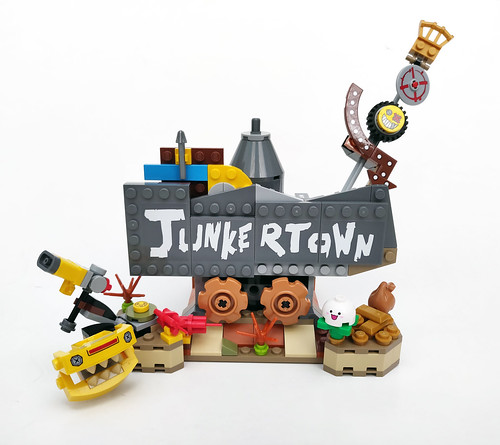 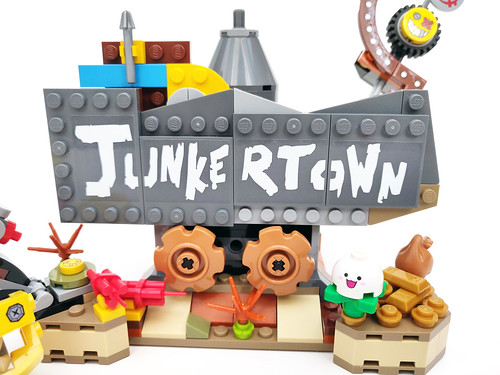 The front left has a spot for the accessories like the Steel Trap, Scrap Gun, and the Concussion Mine. There’s also a couple of stick of dynamite. 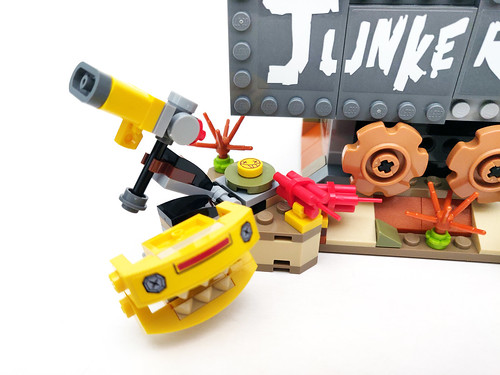 The front right side is the gold from the treasure room where the Defense comes out of on the last point of the map. 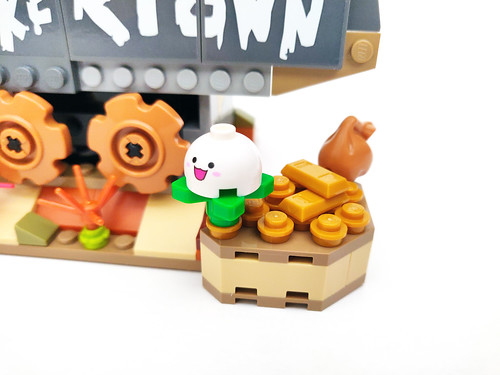 Behind the Junkertown sign on the right side are the signs in front of Junkrat’s house. This includes the crown on the top along with a stickered cross and smiley face. Below those are some stickered arrows. 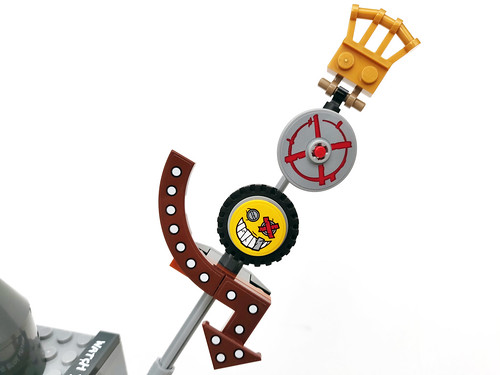 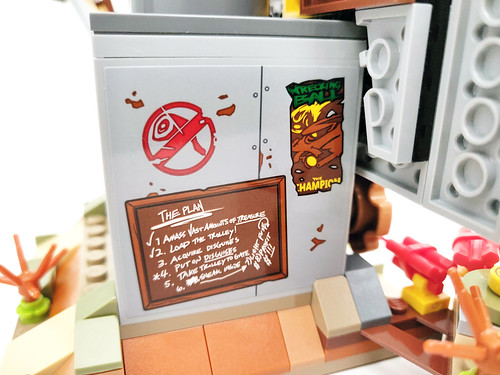 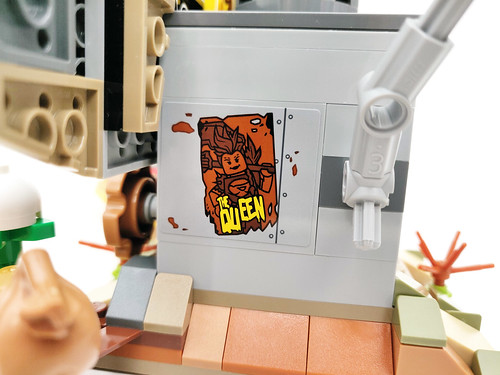 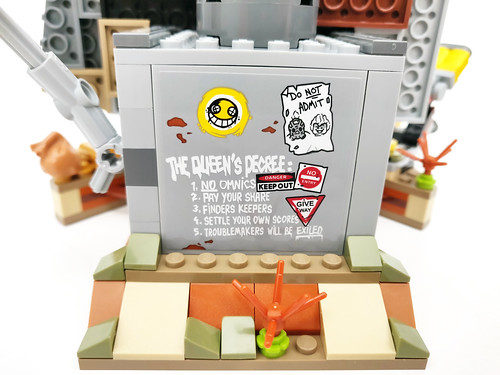 Finally, we have the area behind the Junkertown sign that you can display Roadhog’s bike on top. There’s a spot on a plate below the bike where it sits on the pin. 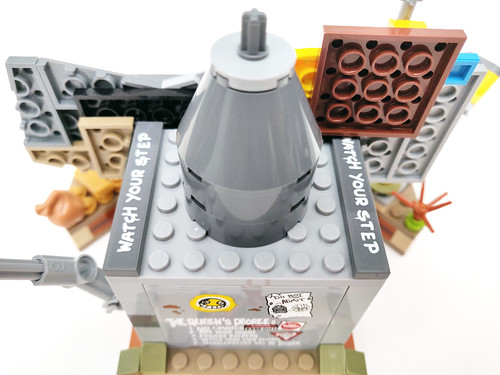 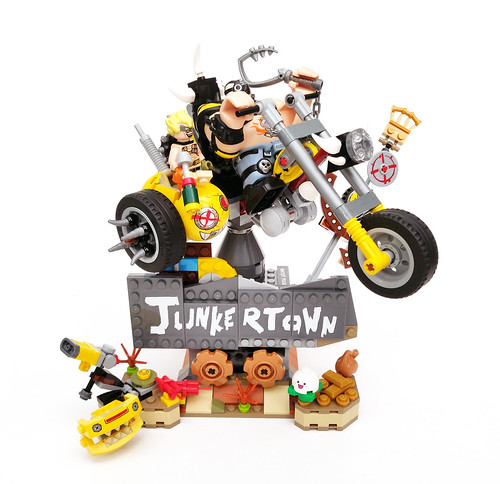 Overall, the LEGO Overwatch Junkrat & Roadhog (75977) set is a pretty cool looking set. I really like how detailed everything is and how LEGO packed bits of Junkertown throughout the build.

There are also some things I don’t like about it. One is the high price point which is understandable because it uses larger parts and a new mold for Roadhog. Speaking of Roadhog, his Scrap Gun isn’t too accurate especially the handle but I don’t think there’s anything else LEGO could have done to rectify that because of his large hand. Also the stickers were very frustrating to put on straight especially for the Junkertown sign. I guess that could be overlooked with all the cool printed pieces that was included. 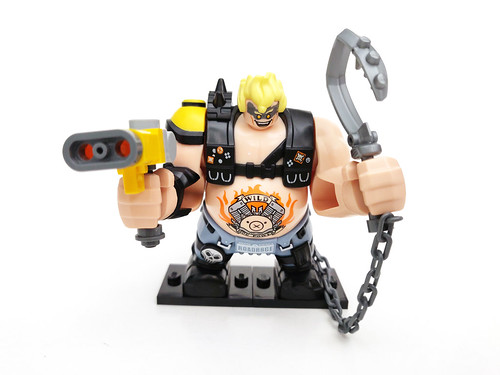 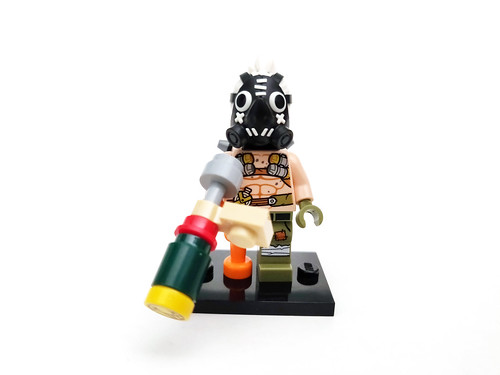