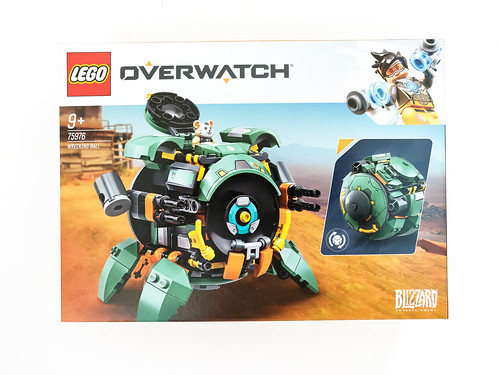 The new wave of LEGO Overwatch sets come out in a few days but I’ve gotten my hands on them just a bit early to see how they are. There are only two sets in this particular wave and the first one we’ll be checking out is Wrecking Ball (75976). It has 227 pieces and retails for $19.99. The contents of the box include two numbered bags, the instructions, and a small sticker sheet. 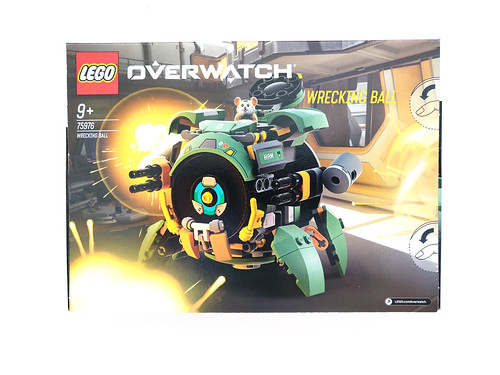 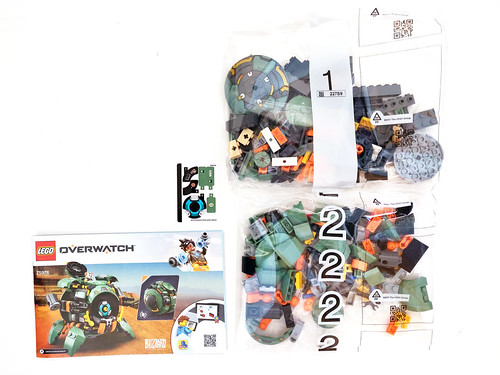 Technically it isn’t a minifigure but we do get a Hammond figure. He is a hamster that stands upright. His face shows him with a scheming expression. The mold also has his gray backpack showing on the front and back. I do wish the mold was of Hammond pointing instead of a standard standing pose. 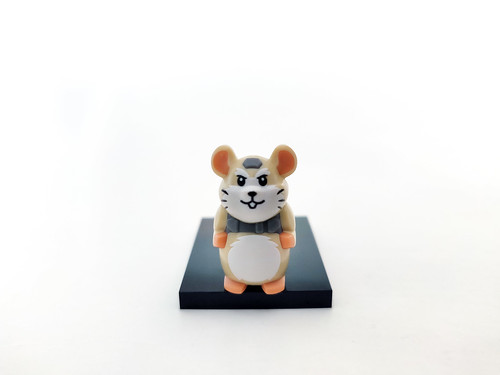 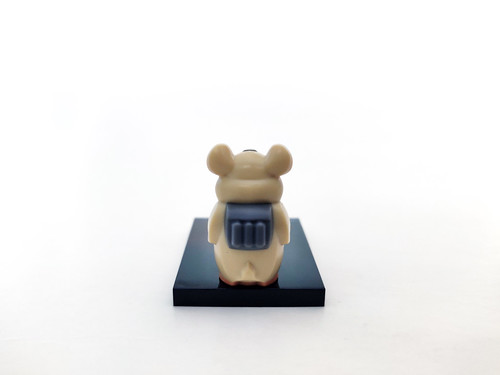 Hammond’s mech is called Wrecking Ball and it is basically a modified escape pod. The color scheme of it is the default olive green and orange. The walker mode has a pretty menacing look as it walks on the four bulky legs and the two small front ones. The larger legs are on orange ball joints which I believe are brand new. The small legs are just 1×2 slopes attached to a bicycle handle. 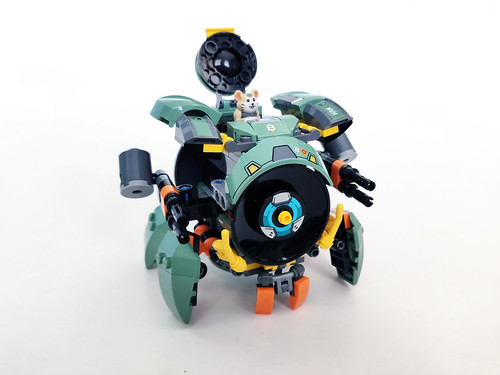 The front of the mech has a sticker for some details. I believe this is for its Grappling Hook. There are more stickers in the general vicinity. There’s one on the 1×2 slope of the number 8 which is Hammond’s designation of Specimen 8 on the Horizon Lunar Colony. There are a couple more stickers on the front side armors. The last stickers are for the control in the cockpit.

Each side of Wrecking Ball has its Quad Cannons which are its primary weapons. They are able to fold in and out depending on which mode it’s in as they are on hinges.

The back of Wrecking Ball is nothing too spectacular however it does have a printed dish piece. It’s nice LEGO included it but the colors are a little off from the sand green parts. 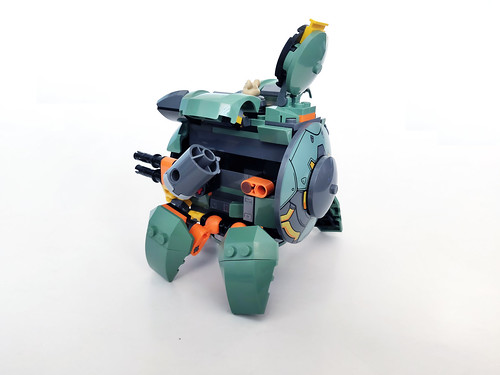 The top of it is the escape hatch that opens up to show Hammond sitting inside. You can pop him up using the mechanism on the right side behind the Quad Cannon. Again, Hammond with the pointing pose would be perfect. 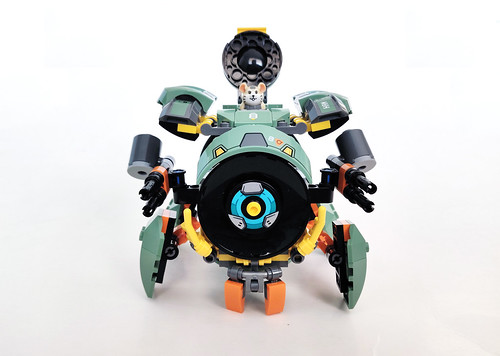 Next up, we have Wrecking Ball’s ball mode. To get it into the mode, you just have to fold in all the legs and the Quad Cannons. The legs themselves fit compactly into the area where the Quad Cannons are. There’s also a 4×4 dish that goes on the front to cover up the Grappling Hook sticker. Hammond goes back down into the escape pod and the hatch closes up. 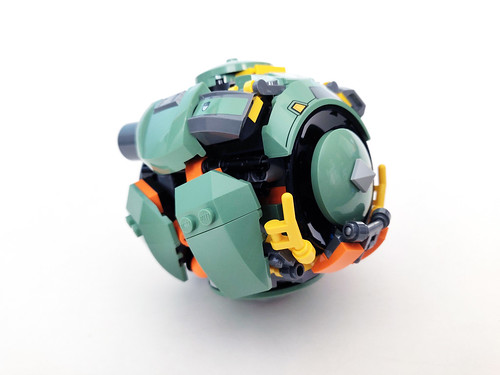 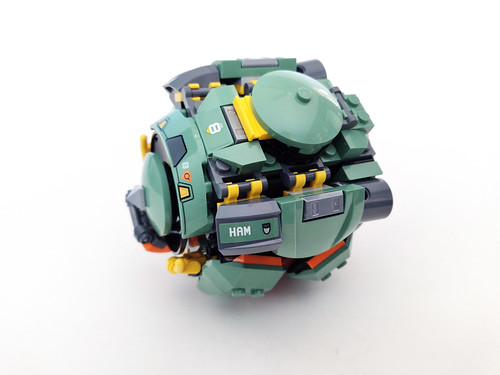 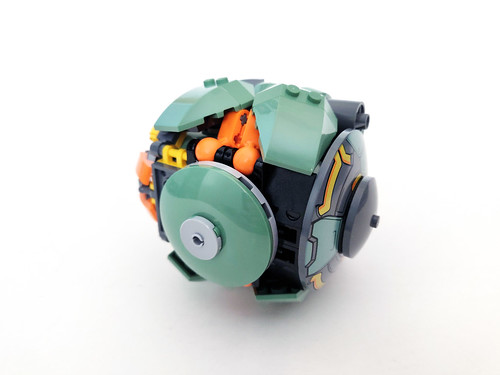 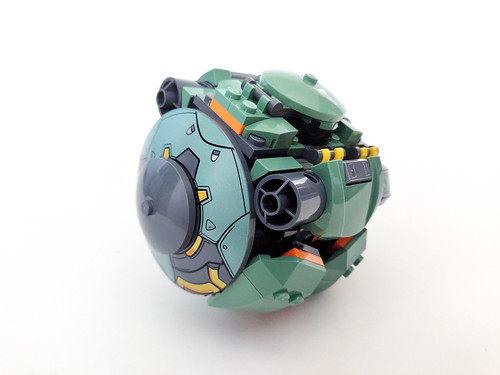 The LEGO Overwatch Wrecking Ball (75976) is a pretty neat set and displays perfectly on your desk with its size. It measures just a tad over 4″ high which is a bit smaller than my Funko Pop! version. I do like how everything is able to fold up to transform him into ball mode. I don’t recommend rolling him around as some pieces may fall off. I personally will keep it in the regular mode since it looks cooler.

There is one thing that I didn’t like about it but it isn’t with Wrecking Ball itself. I don’t know if it’s just me or not but I wish the Hammond figure had the pointing pose because that one is more recognizable for the character.

You can now pre-order Wrecking Ball on [email protected] and it will be available later this week on October 1. 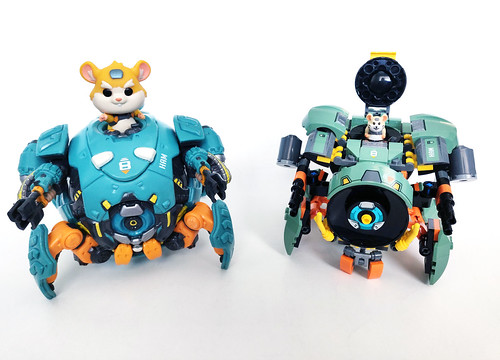