LEGO has released their final statement regarding the cancellation of the LEGO Technic Bell Boeing V-22 Osprey (42113) on the LAN. It didn’t change much from the previous announcement although there have been some functionality issues regarding the gears during the reviews of the set. LEGO said that did not factor into the cancellation.

On another note, LEGO is discussing with BrickLink to have the Osprey listed in the catalog but will be not listed for sale. This is purely to keep the database updated as much as possible. More details of this will be shared later on.

The decision not to launch the LEGO Technic V-22 Osprey was made solely due to the fact that the set breached our policy of not creating real military vehicles. There were no other factors that influenced the decision in any way.

This is just a quick update to say we are discussing with Bricklink about having 42113 included in the catalog but not listed for sale. It should be noted that Las Vegas (Early Version with Mandalay Bay Hotel) was only added to the catalog after 2+ years had passed, so we might not be able to add 42113 immediately. We will share more details once we have aligned with the Bricklink team. 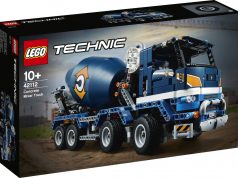