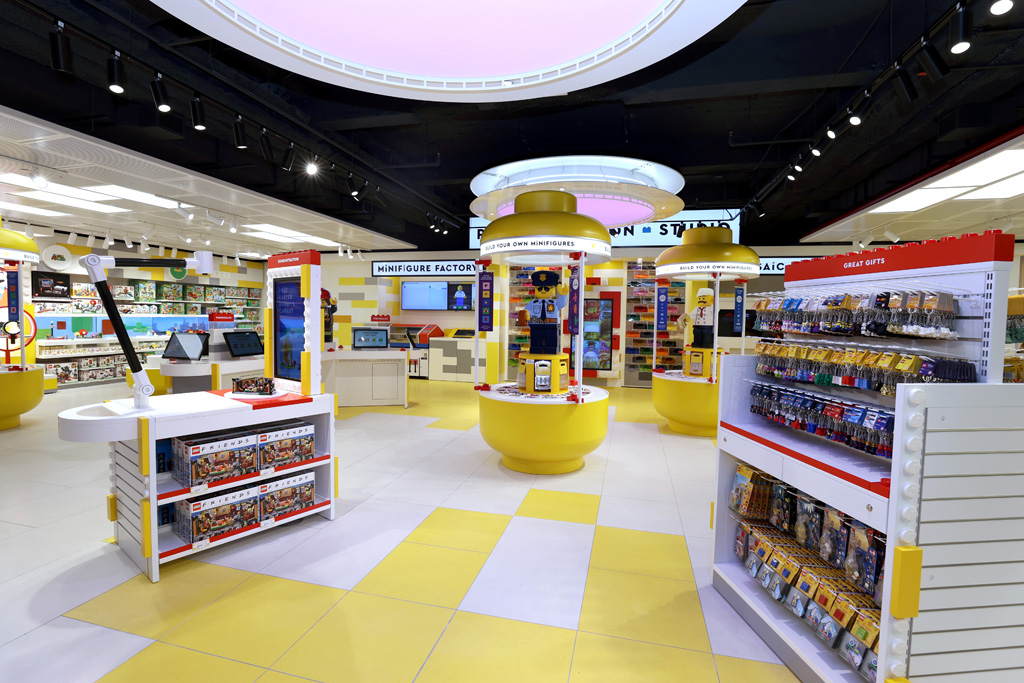 LEGO has revealed their new flagship LEGO Store in New York in a new “retailtainment” concept. It has two stories filling 7,175 square feet and features a new retail format with things that will be introduced to more than 100 stores worldwide in the near future.

• Stores to feature first-of-a-kind immersive digital and physical shopper experiences to inspire creativity and imagination.
• New concept platform to be introduced to LEGO® stores around the world.
• Store transformation part of the Group’s strategy to innovate across retail channels.

JUNE 24, 2021: The LEGO Group today shared a glimpse into the future of experiential retail as it opened its doors on a dazzling new store in New York City. The 7,175 sq. ft, two-storey store on Fifth Avenue is the first LEGO® flagship store to feature an innovative new retail format, elements of which will be introduced to more than 100 stores worldwide in the coming year. 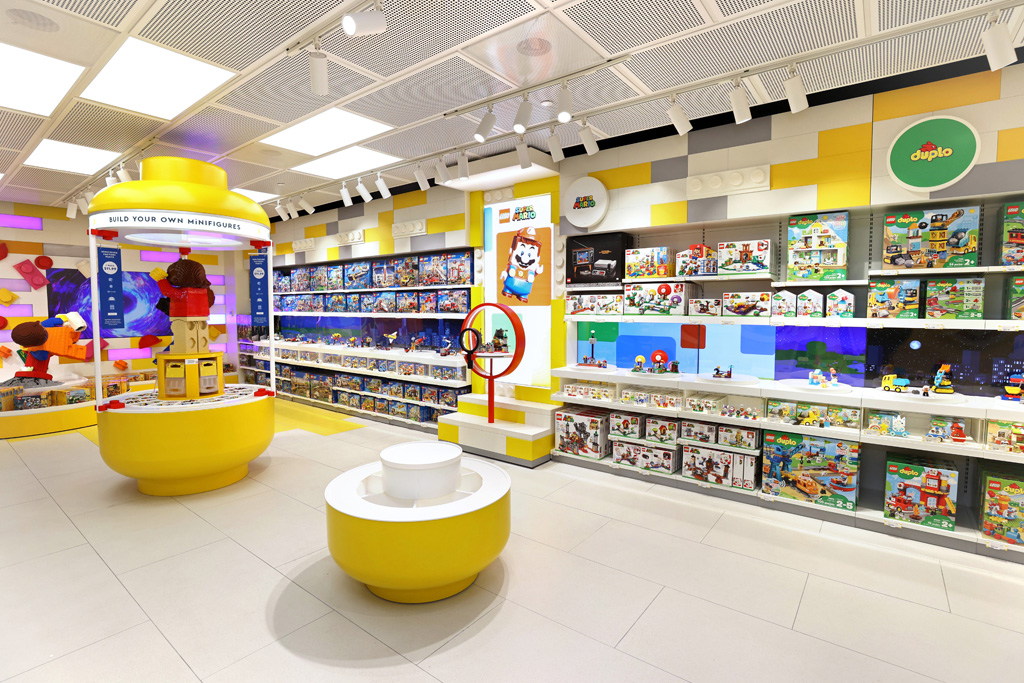 The format is designed to create an immersive world of LEGO bricks by blending unique digital and physical experiences. It has been developed as part of the Group’s strategy to innovate its stores as shoppers seek more personalised and interactive retail offerings. Despite the rapid growth in e-commerce, brick-and-mortar stores continue to play a critical role in strengthening consumers’ connections with a brand and in helping people to discover new products.

Colette Burke, Chief Commercial Officer said: “For a number of years we’ve seen the trend towards people visiting stores for high-quality, entertaining brand experiences. Over the past year our fans have missed personal and tactile interactions with the brand and we can’t wait to welcome them back.”

The LEGO Group spent two years developing the new retail concept and researching what shoppers and children want from a LEGO store visit. They found that people were keen for more opportunities to play with bricks, participate in brick-inspired activities, personalise their experience and have fun.

Colette said: “While our existing store format has been very successful, we are evolving it to strengthen brand love and create memorable experiences people will talk about long after they leave. We want people to walk into our stores and feel immersed in a world of LEGO bricks. We’ve designed the spaces to fire up creativity and imagination and encourage hands-on play. Our talented designers have developed entirely new experiences that blend the very best of ground-breaking customisation, technology and physical play allowing visitors to interact with the brand in exciting new ways.” 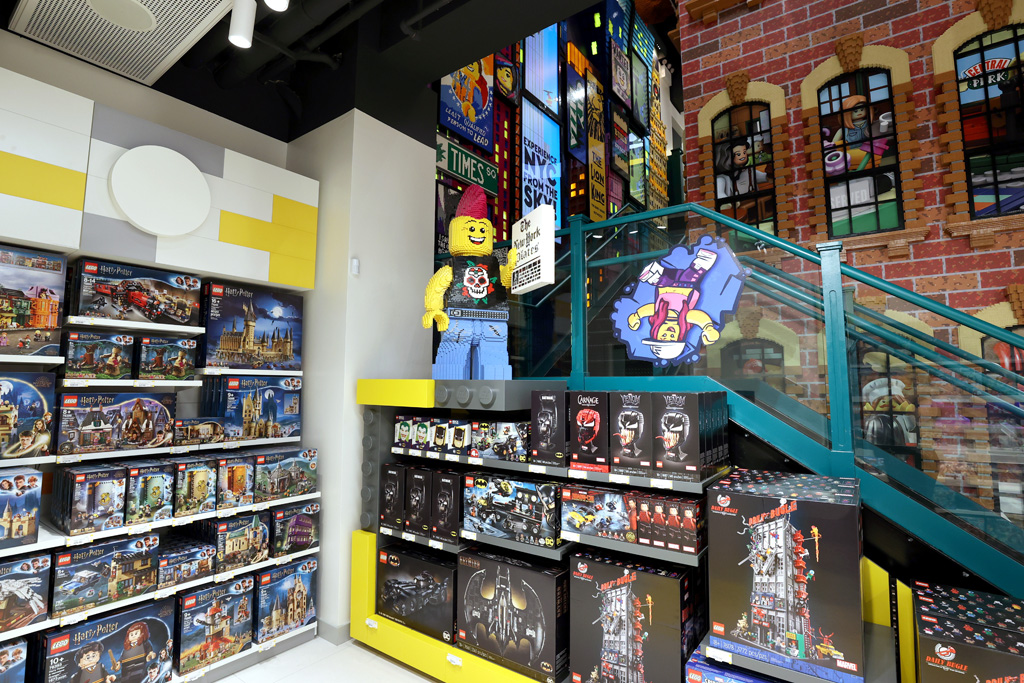 New features in the New York City store, which are set to appear as the new format is introduced to stores around the world, include:

• Brick Lab, a world-first retail experience that immerses people and their LEGO builds in an amazing virtual world. Technology brings walls, floors, and ceilings to life with light, sound, and music for a truly interactive build and play experience.

• The awe-inspiring, interactive Tree of Discovery is made from 880,000 LEGO elements. It is the centrepiece of the store and an expression of the LEGO Group’s commitment to being inclusive and having a positive impact on society and the planet. Visitors of all ages are invited to explore a magical wonderland hidden inside the tree through windows in its rainbow trunk.

• An interactive Storytelling Table designed for adult fans brings to life the stories behind sets available in store. It shows early product designs and prototypes, lifts the lid on the development process and allow fans to virtually ‘meet’ the LEGO designers.

• The Personalisation Studio invites visitors to make a memento of their visit. In it, they can reimagine themselves in LEGO form, either as a portrait from the Mosaic Maker or an iconic Minifigure from the LEGO Minifigure Factory.

• With LEGO Expression visitors can have fun with LEGO Minifigures who mimic their facial expressions.

• Larger-than-life builds celebrating local culture and landmarks. The new 5th Ave store will include NYC icons such a taxicab you can sit in, a giant Empire State Building and One World Trade skyscraper, the lights and billboards of Broadway and Time Square, LEGO Marvel Super Heroes Thor, Spiderman, Iron Man, Hulk and Captain America and the Ghostbusters Firehouse and crew.

The new store format has been designed to be modular and fully flexible so that it can work in LEGO stores of all sizes, as well as in third-party retail partners’ stores. It will be introduced to over 100 LEGO stores around the world during the coming year, as well as select global partner retailers.

The LEGO Group currently has around 731  branded stores in 50 countries around the world and plans to open 120 new stores during 2021. In addition to investing in brick and mortar, the LEGO Group will continue to invest in building its e-commerce capabilities. In 2020, the number of visitors to its LEGO.com online store doubled to a quarter of a billion and this growth has continued in 2021.

Colette said: “We’re seeing significant growth across e-commerce channels, but we also understand the distinct and important role that each of our retail channels plays in building the brand. We will continue to invest in innovating across all our channels to create compelling experiences online, instore and with our retail partners.”

The Experiences in Detail

– A bookable experience that immerses you in the world of LEGO building, bringing physical LEGO builds to life in the digital world! Join Professor Fizziwigg and the Metaloids in their search to find the missing control device hidden somewhere in the digital worlds beyond the portal! The Brick Lab offers a uniquely interactive and immersive creative experience – one that takes the joy of LEGO play to an amazing new level. Designed exclusively for LEGO flagship stores, the 20-minute themed experience uses innovative technology to bring walls, floors, and ceilings to life with interactive animated content, lighting, sound, and music to invite kids (and grown-ups) to play in a virtual world that plays right along with them.  Each visitor will have the opportunity to meet the characters on screen and let their imaginations run wild as they build their own creation, scan their build and then watch it become a living part of the Brick Lab in seconds so they can play both physically and virtually – helping in the mission to save the day! 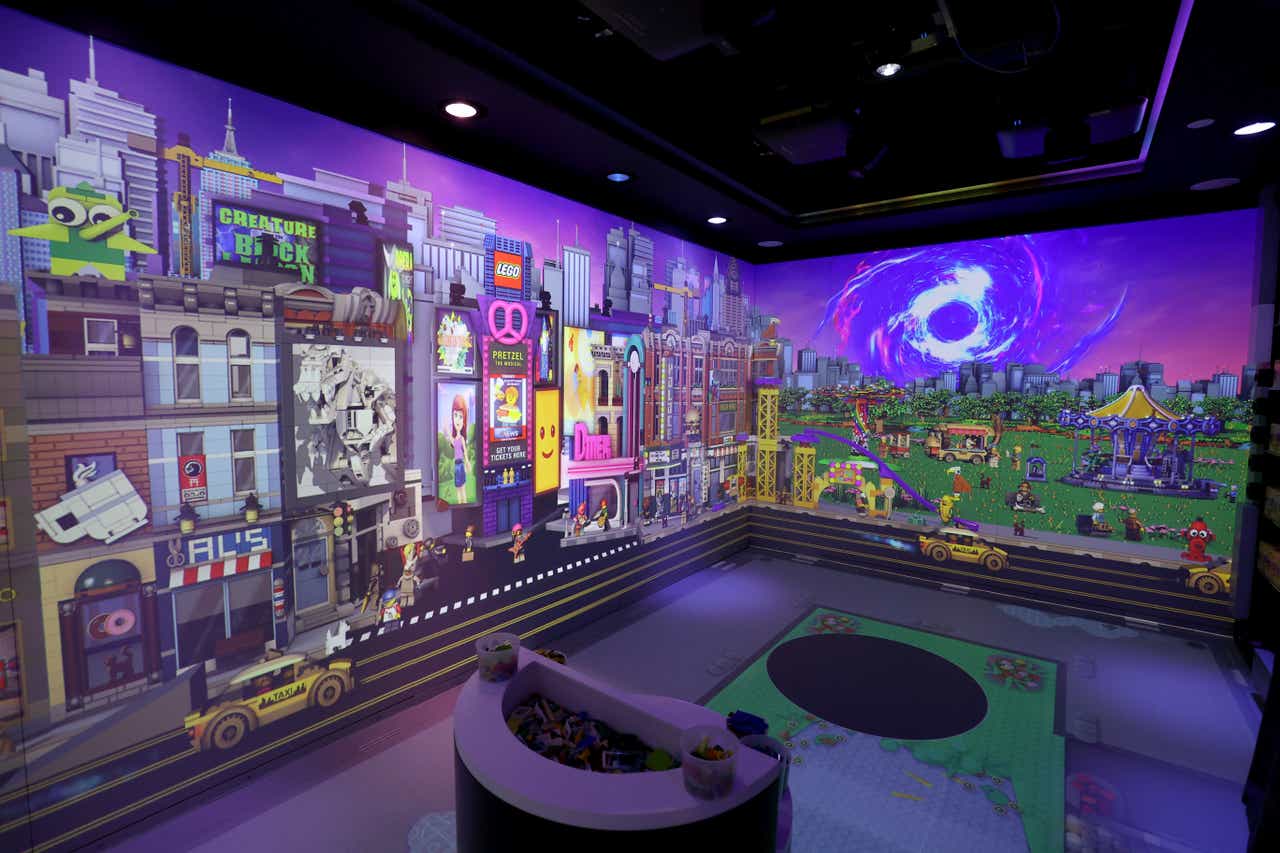 The Tree of Discovery

– At the heart of the new store is The Tree of Discovery, an intricate model that showcases LEGO story-telling on a huge scale. The tree, which took 1,900 hours to construct and is made of over 880,000 LEGO bricks, symbolises the LEGO Group’s commitment to having a positive impact on society and the planet. A key feature is its bright rainbow trunk which houses a whole host of wonderful hidden details and secrets for shoppers to discover such as mini-scenes, kaleidoscopes and picture viewers from DUPLO, Technic and the LEGO System in Play bricks. 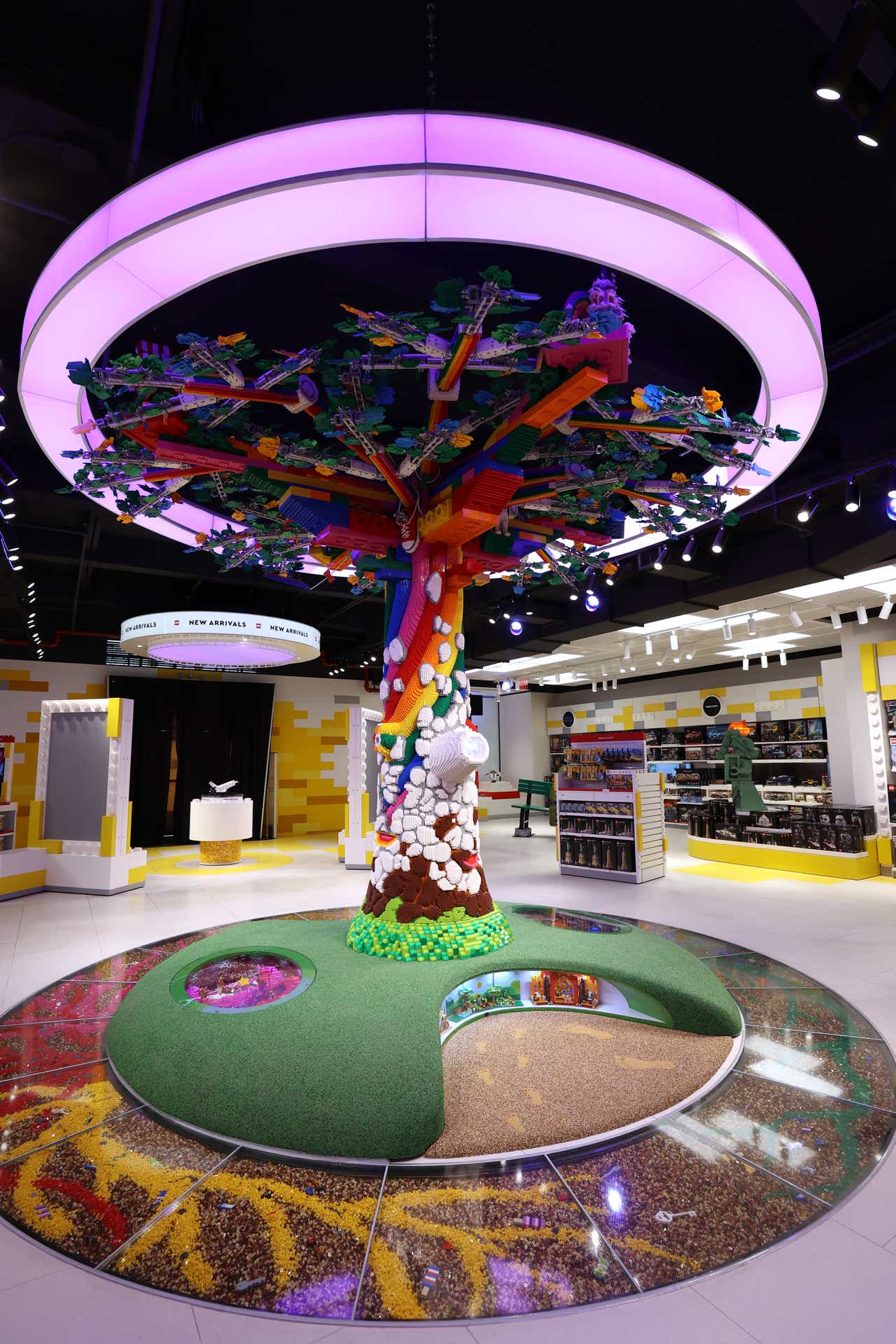 – An all-new area of the LEGO store which allows children, parents and grown-up fans to demonstrate their creativity via fun, innovative hands-on experiences and immersive builds with LEGO bricks. Visitors also have the opportunity to buy some creations to take home as a lasting memento, including the Mosaic Maker and the LEGO Minifigure Factory.

– Which captures your image and creates your own personalized LEGO mosaic portrait in just a few minutes. 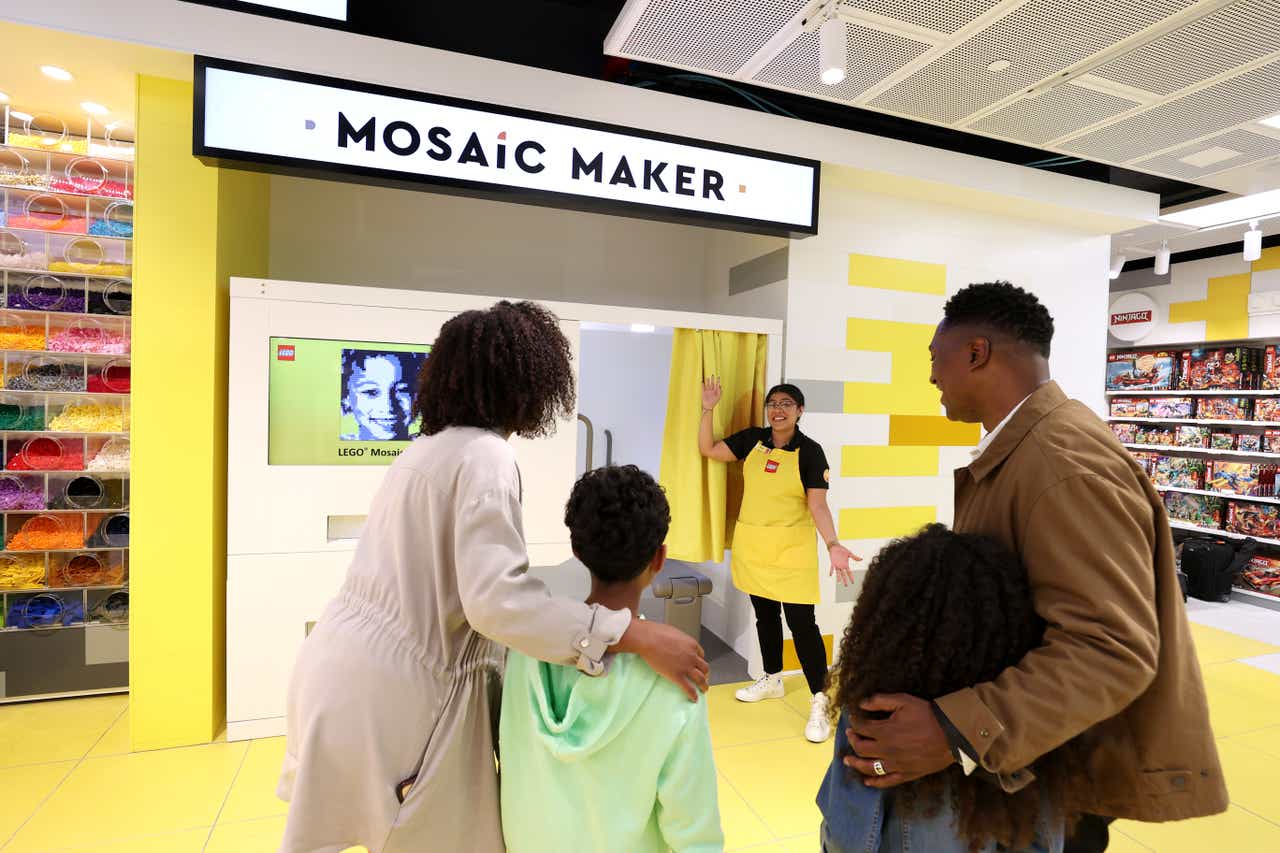 – Allows you to design and create a unique LEGO Minifigure (complete with a brick with your name and a special box) – the perfect souvenir for your visit or gift for someone else. 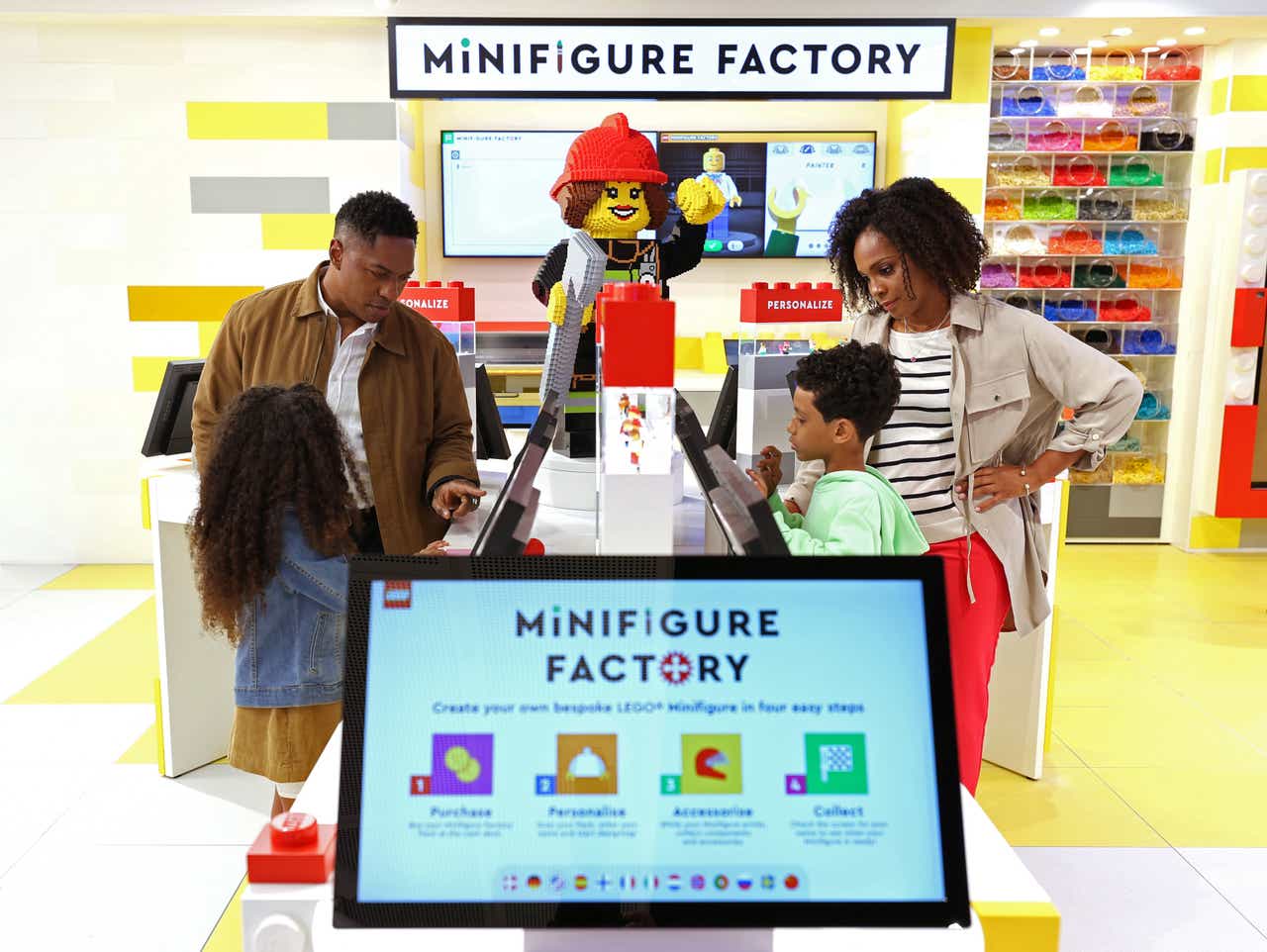 – Ever wanted a LEGO Minifigure to copy your every move?  Well now you can with the magical LEGO Expressions. Simply stand in front of the screen and Lady Liberty and her NYC pals will copy every facial expression you make! 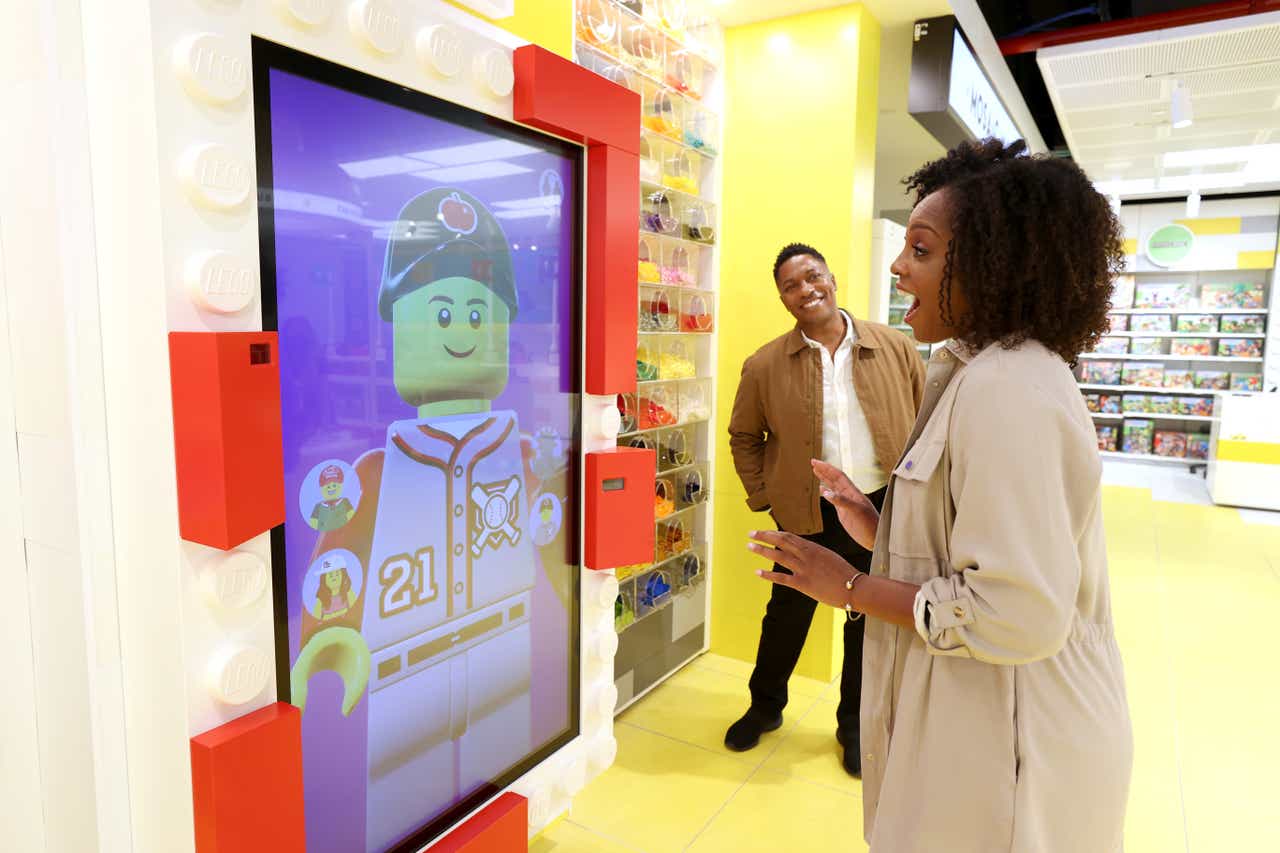 – Waiting to pay has been upgraded thanks to a new and interactive feature. When standing in a certain spot in the line, customers can interact with the Lady Liberty minifigure on the screen.  Give her a wave and see how she responds. 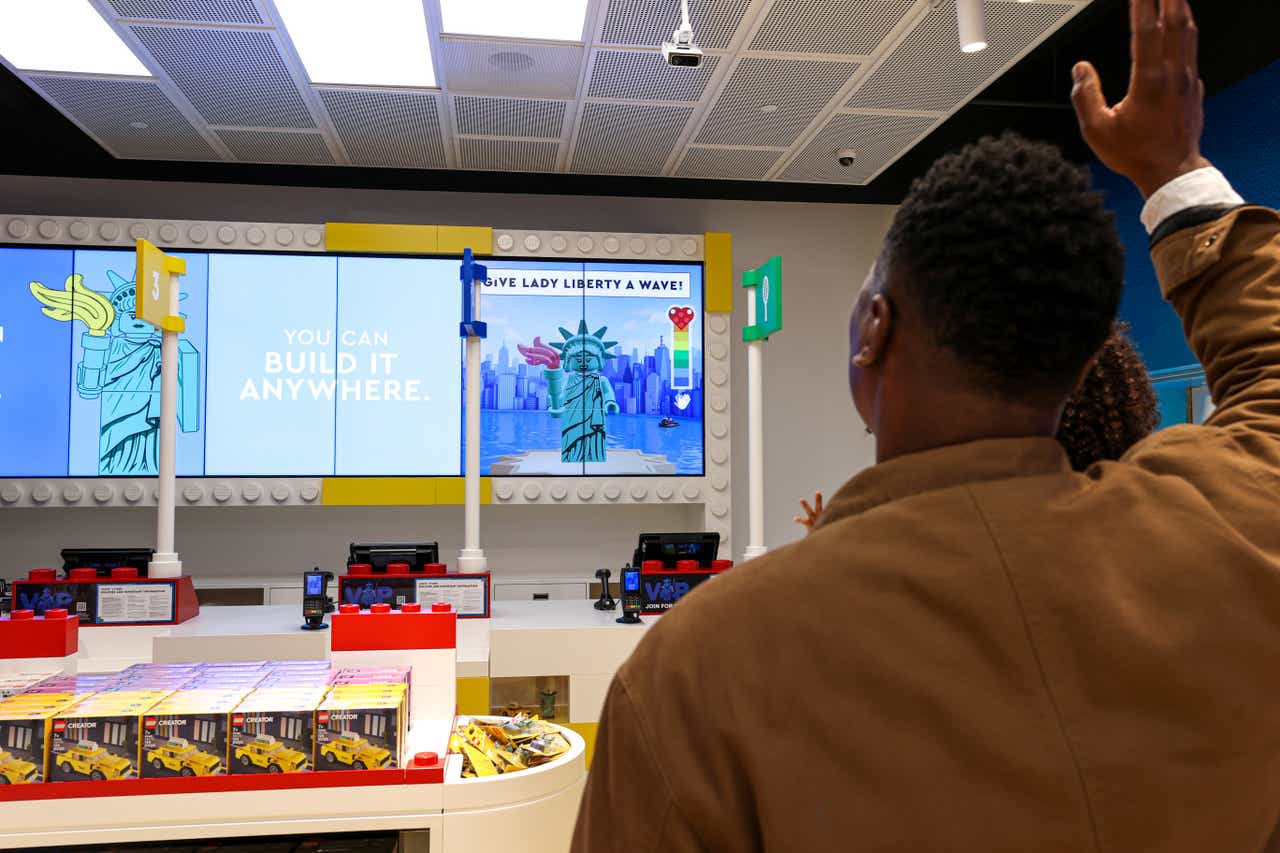 – Go behind-the-scenes of the LEGO design process and learn about our LEGO sets via interactive areas that allow you to “meet the designers” through interviews and videos displayed on screens, while playing with the set in-front of you. 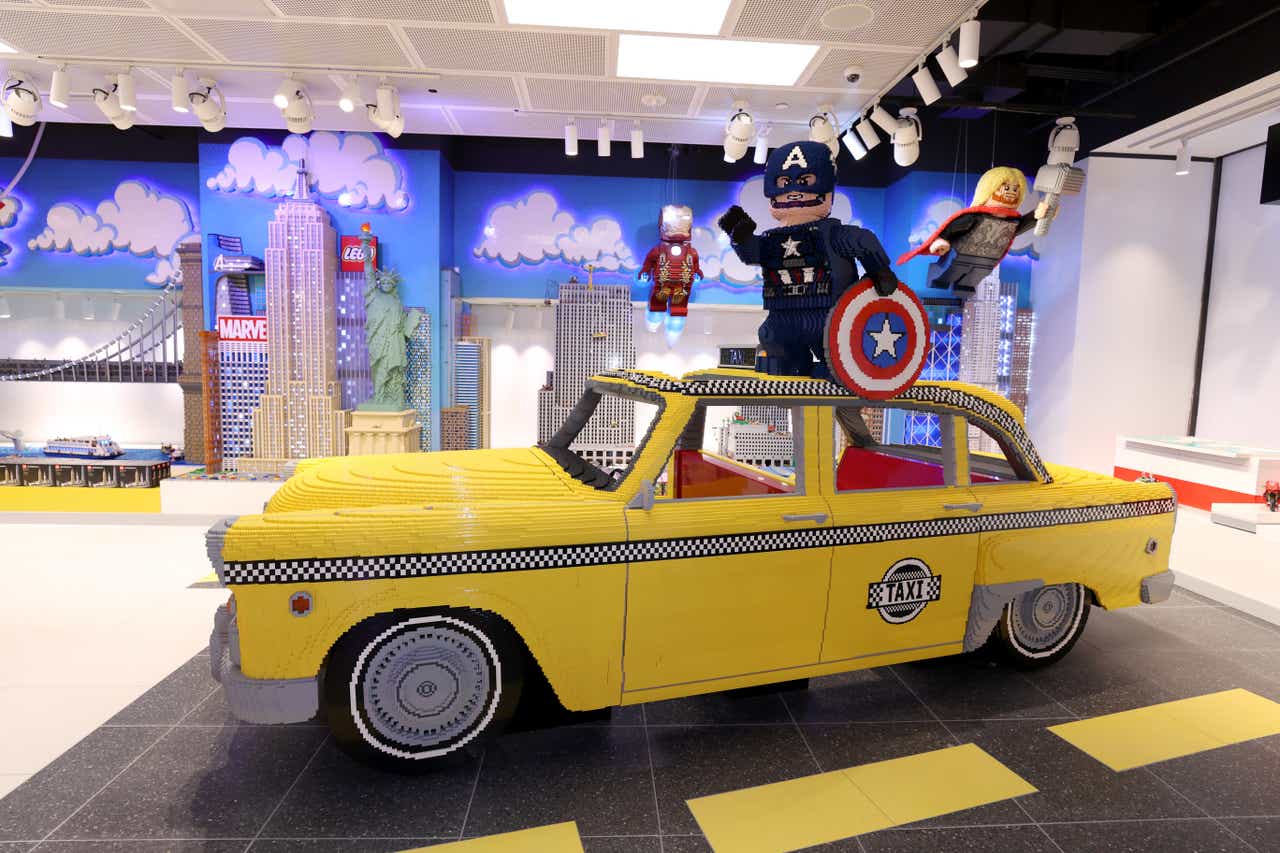 • The first ever LEGO retail store opened on April 2, 1992 at the Mall of America in Bloomington, Minnesota
• There are now 731 stores globally in 50 countries
• This year we opened our first store in Poland, in the city of (Warsaw)
• The LEGO Flatiron Store in New York City, is in a building that was formerly a bank and includes the original vault below the store