It’s never too early for Christmas news and it looks like we have a first look at a new LEGO Seasonal Christmas Ornament (5004934). As you can see from the images, it’s a new concept consisting of 66 pieces which includes small builds like a tricycle, race car, a gift, and a couple of minifigures. You also notice that part of the build comes out from the top of the box. That’s because the box itself is the ornament and it doesn’t look like there’s an actual tree build which is disappointing. 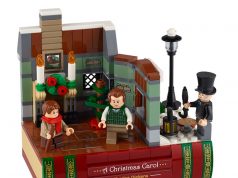