The summer wave of the 2013 LEGO Star Wars sets have started to show up in stores and a friend urged me to pick up one of these sets yesterday. There are only a few of the summer sets that I am looking to get and one of them was the Corporate Alliance Tank Droid (75015). This set recreates the scene of the start of the First Battle of Geonosis although it wasn’t seen in Episode II.

This set contains 271 pieces and retails for $19.99 which is a great $0.07/piece although it is a little skewed. I’ll explain more of that later. The box contains two numbered bags, one instruction booklet, and two grey inverted dishes. 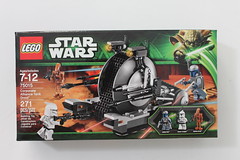 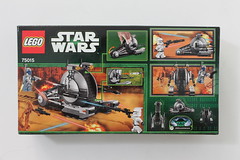 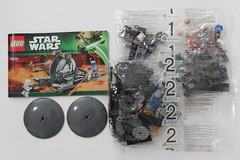 There are three minifigures in the Corporate Alliance Tank Droid set: Jango Fett, a Clone Trooper, and a Battle Droid.

Jango Fett finally makes his long-awaited return in a LEGO set in 2013. It’s been 11 years since we’ve him in a set so fans who didn’t get a chance to get the original minifig the first time around, now have a chance to get him and at an inexpensive set. In this redesign, he has a silver Mandalorian armor printing with a brown belt which goes around the back as well. The armor printing also goes down to the front of the legs. The arms and most of the legs are now sand blue and the hands are a darker navy blue. Jango has a single-sided head with a smirking expression. He has some nice details in the face like the scar next to his right eye and a nice five o’clock shadow growing. His accessories include a silver Mandalorian helmet with a black T-shaped visor over a blue mask. There is also an antenna on the side of the helmet. Finally, he has his two WESTAR-34 blaster pistols. 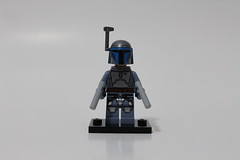 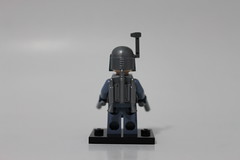 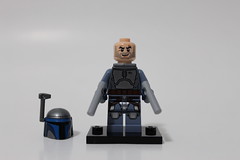 The Clone Trooper is the Phase I version which we’ve seen in a lot of sets before. He has a single-sided head with a clenched teeth expression. His accessory is a DC-15A blaster rifle. 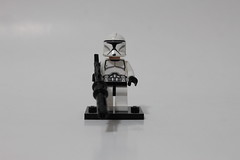 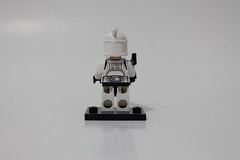 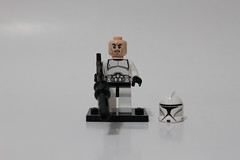 The final minifigure in the set is the Geonosis Battle Droid. This version of the droid is brown in color and has a blaster and a backpack as it’s accessories. 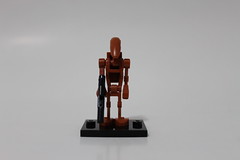 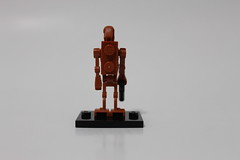 The Corporate Alliance Tank Droid or the NR-N99 Persuader-class droid enforcer was used during the Clone Wars and usually followed the larger vehicles. The tank droid is mostly grey and dark grey in color. It uses a single tread motor system to drive the vehicle which is surrounded by the larger dish pieces on the sides. There are a couple of blaster guns as well as flick-fire missiles attached to either side of the dish pieces. It is also equipped with photoreceptor eyes on both sides of the tank. In the front are a couple of outrigger wheels that on the surface while the treads do the work. In the back are a couple of smaller wheels that the tread goes around. The tread works by a couple of “hidden” Technic gears in the front and back. The tank droid works best on carpet or any fabric surface but will mostly slide on any other surface such as hardwood or any smooth surfaces. 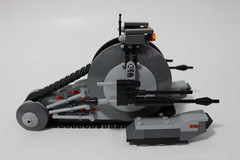 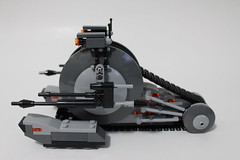 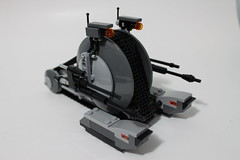 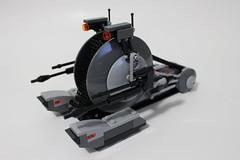 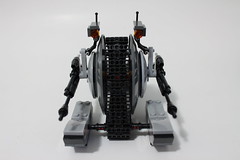 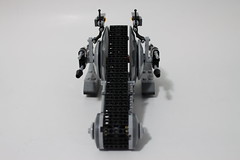 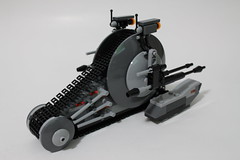 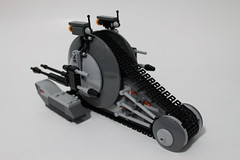 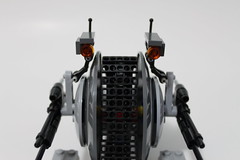 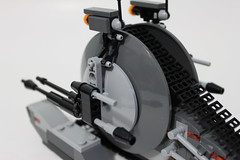 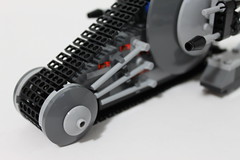 The main draw of the set is the Jango Fett minifigure. It’s been over a decade since the original minifig came out so latecomers to LEGO Star Wars now have an easier chance to get him. The set also makes a good army builder set if you’re making a Clone army or a Droid army. The 2013 version of the Corporate Alliance Tank Droid has a little bit more detail than the 2009 version which is always better. There’s not much play feature to it except for rolling it around and shooting the flick-fire missiles.

Like I mentioned before, the price per piece ratio is a little bit skewed due to the amount of pieces used for the treads. There are 60 tread pieces used so if you subtract that from the total amount of pieces included, you will actually have 211 pieces which is still under $0.10/piece. 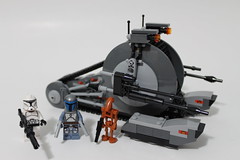 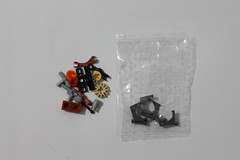