For Christmas, I received the LEGO Star Wars Darth Maul’s Sith Infiltrator (7961) set as a present from my girlfriend. I was excited because I wanted to add the Darth Maul minifig to my collection. This set recreates the scene in Episode I: The Phantom Menace where Darth Maul was sent to capture the Queen and tracks them to Tatooine. There Qui-Gon duels the Sith apprentice before he escapes.

The Sith Infiltrator came out in June 2011 and is the third version of ship with the first two being released in 1999 and 2007. The set contains 479 pieces and retails for $69.99 which rounds out to about $0.15/piece. The pieces are packaged in 4 bags numbered 1-3 and has two instruction booklets.

*Note* I will only be doing a review on this set and not comparing them to the previous versions as I do not own the other ones. 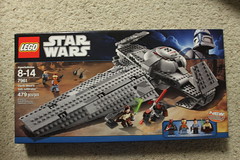 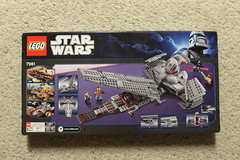 This set come with four minifigs which one is brand new to the Star Wars. We get Darth Maul, Qui-Gon Jinn, Padmé Naberrie, and Captain Panaka.

Darth Maul look looks really cool in his black attire. He comes with his double-bladed lightsaber, an interchangeable hood, and two “horn” pieces to represent his Zabrak horns.

Qui-Gon Jinn has his tan Jedi tunic with brown cape and pants. He also has his green lightsaber. Jinn fairly resembles Liam Neeson’s portrayal of the character especially his beard and hair.

Padmé Naberrie is dressed in her blue handmaiden attire. Her hair is pretty unique with four braids running down the back. Padmé also comes with a blaster.

Captain Panaka comes in his Royal Naboo Security Forces attire. He comes with his maroonish hat and blaster. 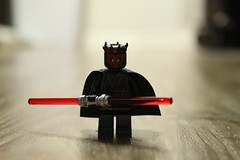 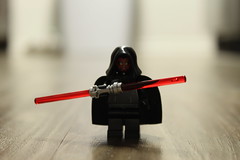 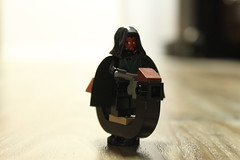 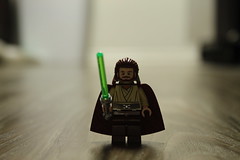 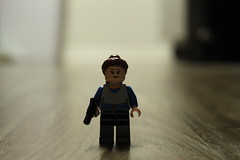 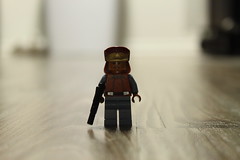 First off, I must say that the Sith Infiltrator or the Scimitar looks a lot the one in The Phantom Menace. It is a pretty easy set with not much building problems to it. The ship isn’t that heavy to hold in your hands so kids are able to swoosh it around. Although you’re able to pick it up and swoosh it, you have to be careful with it especially the middle part because it feels kind of flimsy there. 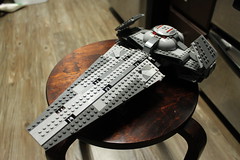 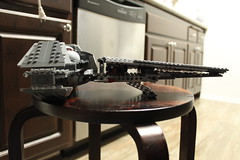 For the articulation of the ship, the front part flips up and you can see the inside of the ship. Here you can see the storage for two DRK-1 Dark Eye Probe Droids which you can drop them with the latch on the bottom. There is also a spot for Bloodfin, his speeder bike. The instructions didn’t say how to fit the bike on the ship so you have to find the right spot or the hatch won’t close right. A couple of neat features of the Infiltrator is that the landing gear in the front and the fins on the back open or close depending if it’s in flying mode or in landing mode. There are also two flick missiles attached to the side of the ship. 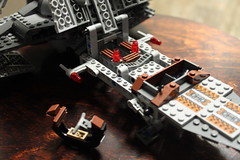 On the back side of the Infiltrator, you have the cockpit area. It opens by lifting up and the landing ramp flips down. Here you can see the control panel were you can stand Darth Maul in. One neat feature in this area is the lightsaber storage section where it fits right where the ramp closes. 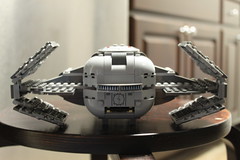 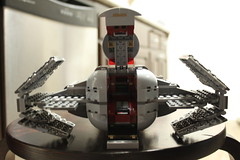 Darth Maul’s Sith Infiltrator is a nice set to have if you can swallow the price for it. The minifigs are good since you get most of the main ones in the particular scene. I recommend picking it up. 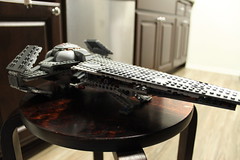