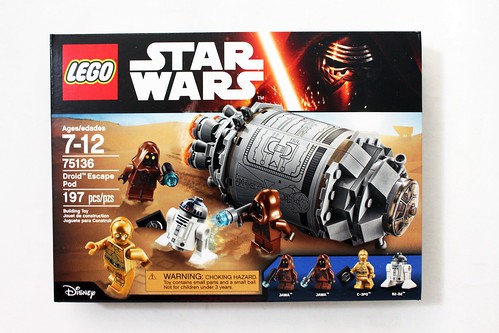 Earlier this month here in the US, LEGO released another LEGO Star Wars Original Trilogy set with the Droid Escape Pod (75136). The set contains 197 pieces and retails for $24.99 for a not so good $0.13/piece ratio. The contents of the box include two numbered bags, the instructions, and a sticker sheet. 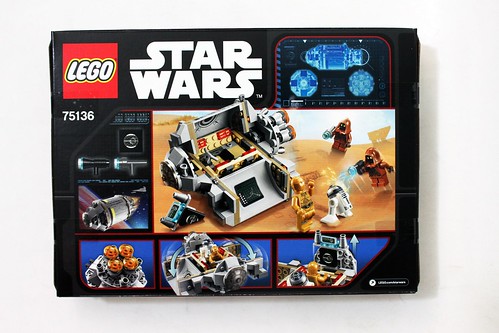 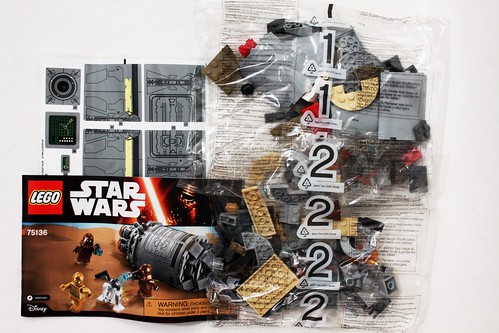 There are four minifigures in the set C-3PO, R2-D2, and two Jawas.

Although C-3PO looks very similar to to other versions of him, this one is exclusive to this set. The torso is actually new because of some slight additions. The majority of it is the same as before but the wires now have yellow ones added to the red, white, and blue ones on both sides of the torso. The legs have been used before but are pretty limited. They first showed up in the UCS Sandcrawler (75059) and more recently in the 2015 Advent Calendar (75097). Finally the head has also been used before. 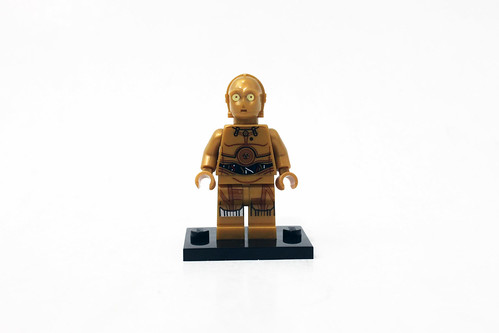 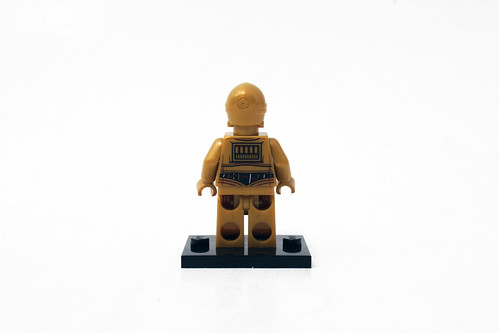 R2-D2 is also exclusive to this set. The torso and legs are the same as before but the head is new. It now has some lavendar printing for its processor state indicators on the front and back of the head. I believe that’s the only change in the minifigure. The back of R2-D2 has no printing. Maybe one day, we’ll get one that has full torso printing. 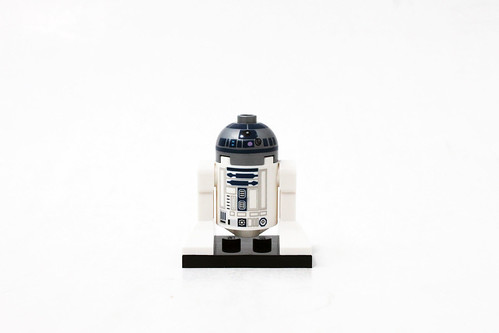 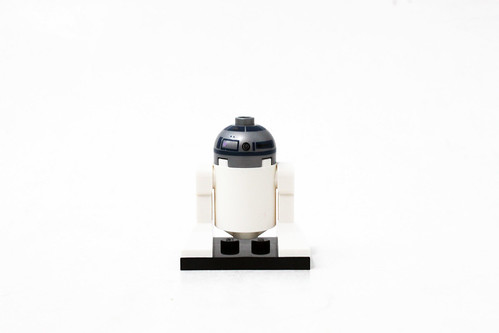 Finally we have the two Jawas. One of them wears a unique bandolier to indicate that it is one of the leaders. This particular Jawa has only appeared in the UCS Sandcrawler set before being released for this set. 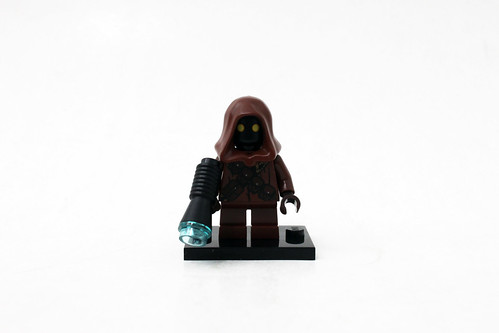 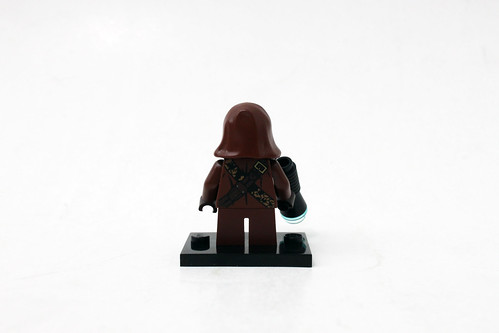 The other Jawa has a more generic bandolier with none of the tan printing. This version of it has also been in the Sandcrawler as well as in Day 4 of last year’s Advent Calendar. Both Jawas have ion blasters as accessories. 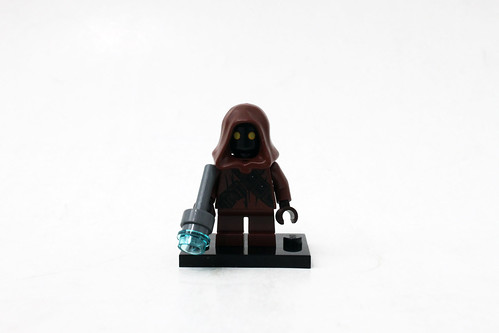 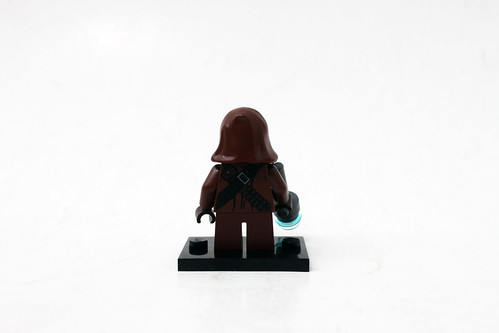 The droid escape pod is the third version of the emergency craft with the first one being in the Droid Escape (7106) back in 2001 and the last one 2012 with set 9490. This latest version of the pod is more film accurate with its cylinder shape instead of the cone from before.

On the main body, there are four stickers to show off the details of the ship. Although they are fairly large, once you put one on, the rest of them are easier to align. There are also a couple of handles for you to open up to get to the inside which I’ll get to a little later. 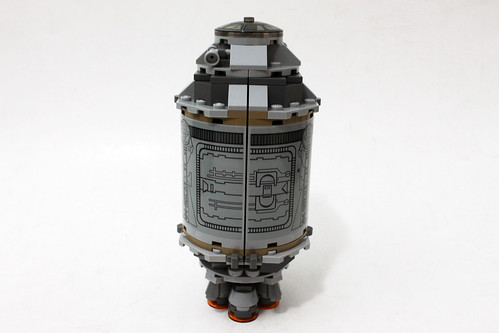 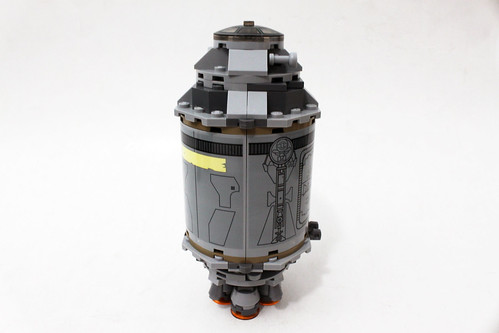 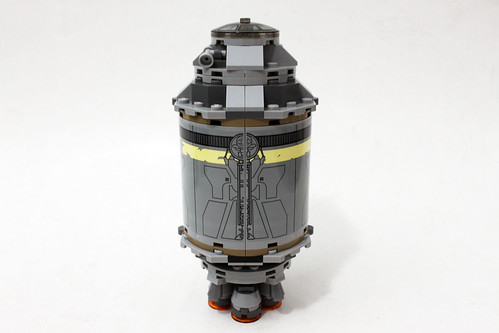 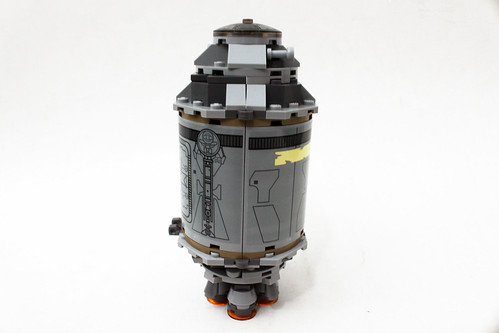 The top of the ship has a printed 4×4 dish that serves as the hatch window. This area also makes use of a lot of 1×2 and 2×2 sloped pieces to build up the hatch area which includes a couple of tap pieces for the thrusters. 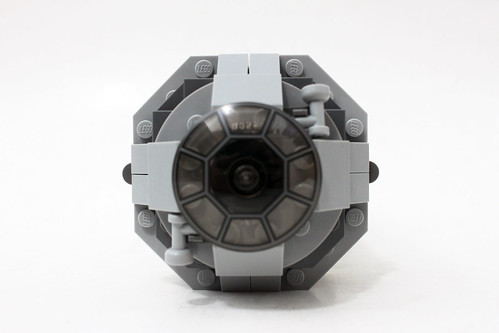 At the bottom, there are four main rockets as well as four more thrusters. This makes the overall look of the craft a lot better than its previous iteration. 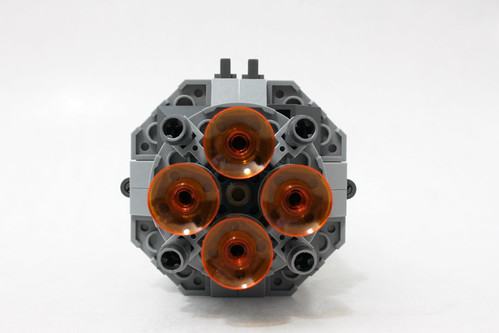 On to the inside, as I mentioned before, there are a couple of hinges that allow you to upen up the hatch to see the inside of the craft. Here we have the seating area for both C-3PO and R2-D2. The control panel is a sticker on a trans-light blue piece. Right below it is the hidden Death Star plan that is on a printed 2×2 tile. The seating area is nothing too special with a spot for both the droids. 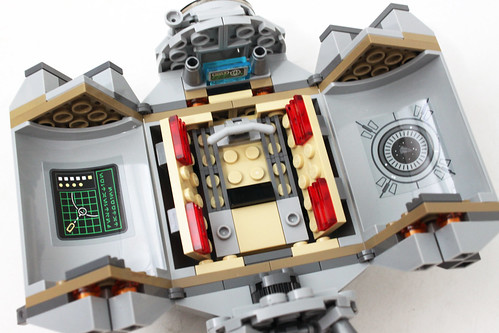 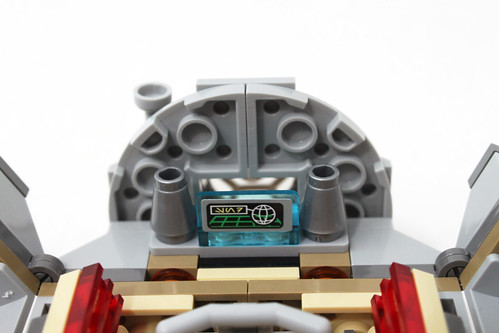 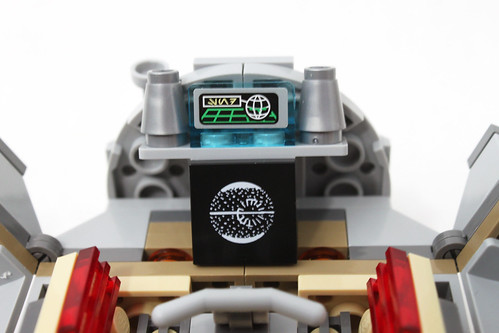 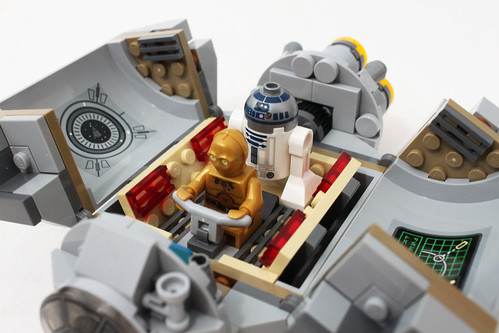 On the sides of the hinged areas are some stickered areas showing off more detail in side the pod. On one side, you have a map of the pod heading towards Tatooine along with some Aurabesh reading “Destination Tatooine.” The other side has a sticker of the window where the droids look out of in the scene. 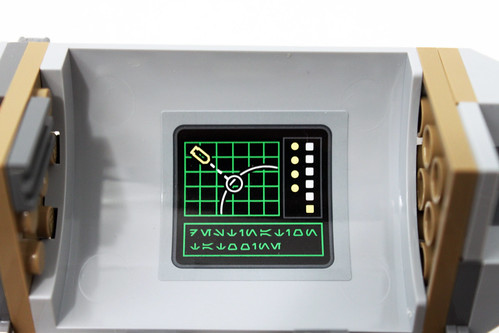 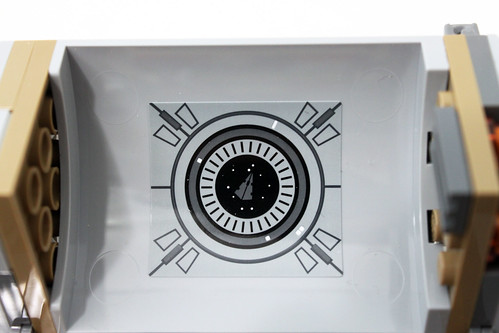 Overall the LEGO Star Wars Droid Escape Pod (75136) is a much better improvement than the previous 9490 version as the general look of it is more film accurate. Although there are stickers, they do bring out the details of the pod rather well. The minifigure selection is good especially considering that both C-3PO and R2-D2 are exclusive even though they have slightly new printing. The two Jawas are good additions too and this set is the cheapest way to get them in a set if you want to expand your Jawa army. The cost of the set is a little high but there are the four large panels to take into consideration so I think $24.99 is justified. 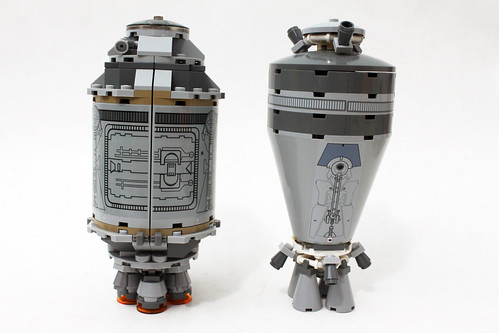 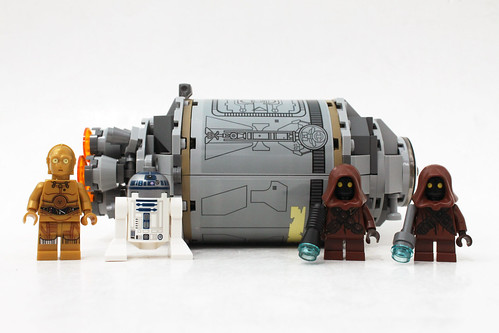