I finally get my hands on the new 2012 LEGO Star Wars sets. The first to be reviewed is the Elite Clone Trooper & Commando Droid Battle Pack. This set was released in January/February 2012. It contains 98 pieces and retails for $12.99 which comes out to a fairly high $0.13/piece. This along with the Endor Rebel Trooper & Imperial Trooper Battle Pack (9489) are the first sets to feature two minifigures from different factions instead of four minifigs from the same faction like in previous battle packs. 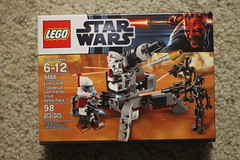 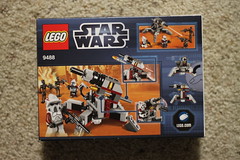 First off, we get a very nice looking ARC Trooper. The printing on the whole minifig is spectacular. He also comes with a black kama and a red pauldron. Other accessories included with the ARC Trooper is a red rangefinder, a backpack, and two blaster pistols.

The other member of the Clone faction is the ARF Trooper. The detailing on this figure is also very good. He looks a lot like the normal Clone Trooper except he has red arms. A blaster rifle is his weapon of choice. There are also visors for the troopers if you want to put them on.

Finally, the last minifigs of the set are the Commando Droids. They are a copper-colored and has regular blasters for their weapons. 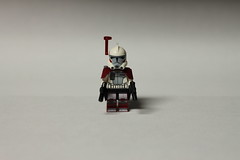 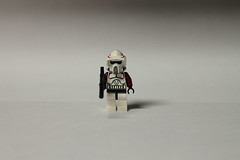 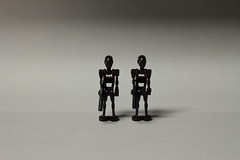 The main feature of the Elite Clone Trooper & Commando Droid Battle Pack is the Republic Artillery Cannon otherwise known as the AV-7 Antivehicle Cannon. It is a very easy build. Features of the cannon include a seat for one trooper, movable legs, an adjustable barrel, and a flick-fire missile. On thing that i didn’t like about the cannon is that the barrel is a bit too short. 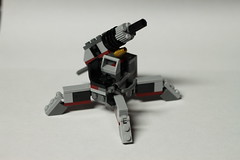 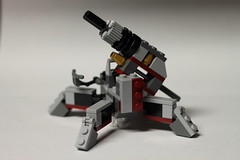 LEGO started the Star Wars starts off the year with a bang with the Elite Clone Trooper & Commando Droid Battle Pack. I really like how the battle packs are assembled having minifigures from both factions. That way you are able to create armies and have battles with what you have. These sets are also great for building MOC’s. Again the only complaint from me is the short barrel on the cannon. I would recommend getting these battle just for the Clone Troopers as they are the best I’ve seen ever. 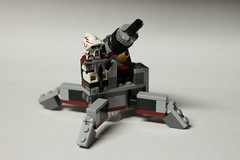