Continuing with the LEGO Star Wars news for today, this post pertains to the upcoming Rogue One sets that will be coming out later this year. The Rogue One subtheme was announced at the Nuremberg Toy Fair last week and there’s been much talk about it the past week or so, mainly if the Slave I shown in the image would be one of the sets along with Boba Fett.

There are now some new box outline images from a retailer catalog which I won’t be posting but they do give some detail in to the Rogue One sets. There are five sets based on the movie with set numbers:

There are also three Buildable Figures based on the Rogue One movie with set numbers:

Note that the background image does show a TIE Fighter flying in the back. Whether or not it will be a set or not remains to be seen. Obviously, there are no info yet on the prices, piece count, etc. but we should be getting more details later this summer. It’s been reported earlier that the sets will be released this October. 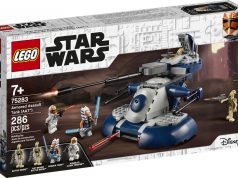